I am not certain why, since Monday was a Civic Holiday, a short week always seems to be longer or go slower for some reason.  Especially when one is out in the working world.  Don't get me wrong, I am quite content with the feeling I have more time in a week then there actually is.....lol, as there is always that "I need to do that one more thing" hovering somewhere in the works of my brain.

I am especially glad that I am feeling there is "extra" time this week, as my brain has planned on me having much  more done before the time this weekend rolls around.  I need to remind my brain that this just might not work out the way it has it planned, as life has a tendency to mess around with the best thought out plans from time to time.....lol.

Seriously, yesterday, I did manage to get the sticky kitchen floor washed and Rob's "scary" downstairs bathroom somewhat cleaned up yesterday, as well as the usual making the bed, and some general tidying up done... you know that stuff that is always there every morning when you rise from your bed?

Rob had a couple of guys drop over to see him, so I had let Bandit out with them.  I guess they left, and Rob had to as well, but on returning back home he found our dear Bandit laying out in the middle of the drive in the biggest puddle there was to be found !!!  He had forgotten and left our poor boy outside !!!  Shame, shame, shame on Rob.....not that Bandit would ever want to run away from such a great home or his loving humans.

Apparently he was quite the "mud dog" and had to be hosed down before he was brought back into the much cooler basement.  Ha, ha, ha....if I had of known he was out there laying in that mud puddle I would have been certain to have taken a picture of that !  or even one of Rob trying to get him hosed off before bringing him back in !

Well the end result of Rob forgetting our poor boy, Bandit was too wet to take in the car to a destination for a walk, as it was his turn you see......so there was a sadness in his eyes when Lexus was able to go on yet another car ride and walk with Mom.  Poor Bandit.   I will just have to make it his turn the next two, as to even things out between the two of them again.

Regardless of poor Bandit's dilemma, Lexus and I had a nice walk together up a country side road and back, with only experiencing a couple of raindrops here and there.

Oh I almost forgot the main "highlight" of yesterday!!!  We went downtown to the "Explore the Bruce" office in Wiarton to make claim to our T-shirts, as Rob and I managed to complete our Passports within the first 1,500 person limit that qualified for a T-shirt.  I never got Rob to model his, so these picures will just have to do..... 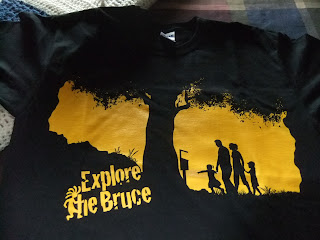 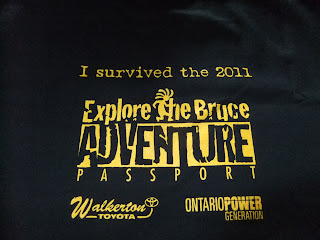 Very very nice T-shirts, as well as very much appreciated.  We also submitted our completed Passport for a chance at the draw, which I believe is sometime this Fall, as the contest closes October 31, 2011.

There is till lots of time to have an "Explore the Bruce" Adventure, so go online to get a passport, or to find out where to pick one up, as it is "well worth" the adventure.  Also once submitting your completed Passport, you too could qualify to win a Grand Prize of a "1 Week Family Cottage Rental" at the Lion's Head Beach Motel - $1,000 Value with the minimum of 12 stops, or one out of seven other prizes available.  Rob, I, and the group of people we were with, most certainly had a "blast" on our "Explore the Bruce Adventure" !

As I just returned from my kitchen with a second cup of Java, I noticed the sun is starting to burn off an early morning fog.  Wonder what kind of day that will bring with it?

There it is, another nice Summer day straight ahead into the day at hand.  I think it might be a good day to wash that small load of whites I have sitting in the laundry basket.

My day started out so nicely with two very nice and unexpected emails from friends.  My friend, Barb, here in Ontario, sent me a quick note letting me know she is, for the second time, a new Grandmother.  My friend, Jiba May, from Australia, emailed me a lovely note saying her and her husband will be returning back home to Australia from their summer home in Naxos, Greece shortly.

I do love getting personal notes from friends, as there are times I don't always have time to sit and read all the jokes or forwarded emails.  Not that I don't enjoy some of them, it is just nice to get an email on a "personal" note, almost like getting a letter in the mail, which is almost unheard of now a days !  It is nice to get "personal" mail, instead of "junk" mail somedays.....lol, and I really don't mean "junk" mail to be taken literally.

Since my brain has decided I "will" be doing that load of white laundry today, I had best attend to the making of my bed and unloading the dishwasher before I get started at anything else, "Just North of Wiarton & South of the Checkerboard".
Posted by Cindy@NorthofWiarton at 8/04/2011 08:08:00 am