What a day was my 2nd day spent away from home !!!  Phew....made it through with flying colours I suppose, as here I sit to tell the story.

I can at least say it first got started with a cup of coffee, so this was a good thing....then on with me, as I had mentioned yesterday, trying to get my wireless laptop going but not until I had been awake and up for sometime first.

As I was sitting in the family room, with I think my second cup of coffee by that time, when Bob had gotten up and we started chatting away with me only having maybe three paragraphs of my daily "blog" completed at that time?  We got onto the subject as to whether he had every gotten a picture taken of the Portrait of his Mother's grandmother's great-great grandmother and emailed off to his one cousin who wanted it.  Well, no he hadn't so we did that. 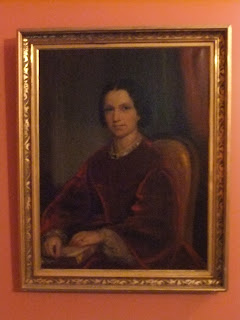 A very interesting article about Robert Whales can be found and read at the following website link:

After I had taken this picture of the portrait and gotten it emailed off to Bob's cousin, Debbie, the phone rang and it was my sister, Donna.  Donna's little dog, Jasper, had been scheduled to have a benign tumor removed and it couldn't be done yesterday, as his kidney and liver counts were out of whack, so she had to go back and pick him up at the vet's.  Well her neighbour that had drove her there was not home any longer and she had no way to get him, so she had called me to see if I would go pick her up to get him......

.....off I went to get myself dressed, not until I had shut off my laptop, hoping my three paragraphs I had started on the "blog" had been saved.

I headed into Kitchener about 10:00 a.m., not returning back to New Dundee until after 12:00 p.m., where I found Bob all ready to go into the Grand River Hospital in Kitchener to visit with Tim.  I collected my wits about myself, and off we went, arriving at the hospital about 1:30 p.m. just in time for visiting hours to begin.

It was so nice to see Tim in person !  Bob and I were there when the physiotherapists had him up for his very first time walking on his newly repaired knees.....it was a very short walk and then twenty minutes sitting up in a chair.  That was way too much for all at once, but we got the nurse back in for her and Bob to help get him back into bed.  No energy after having knee replacement surgery done on both knees all at the same time !!!!  Shortly after getting Tim back into his bed, Bob and I took our leave to let him rest.

After we went and picked up some food stuffs to make that evening's meal, we got back home just before 5:00 p.m. and I got supper put together.  As supper was prepared and put in the oven to cook, I managed to retrieve my "blog" I had started that morning, complete it, and post it "such as it was".  After it was all said and done, we sat down to eat about 6:00 p.m.. 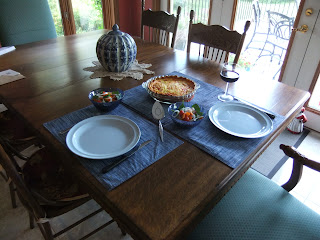 "Bob really enjoyed the quiche and fresh spinach salad I made for our supper." 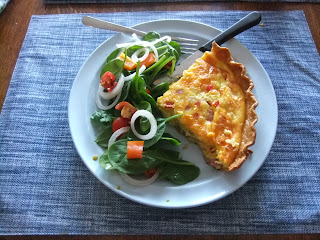 He enjoyed supper so much, I am sure he wants to keep me here only to "cook" for him......lol.  Oh no, we can't have that happen, as my own dear Rob would "waste away to nothing" !

After cleaning up, we took to the streets of New Dundee and went for walk.

"Not a complaint out of Bob as we went up this long uphill grade." 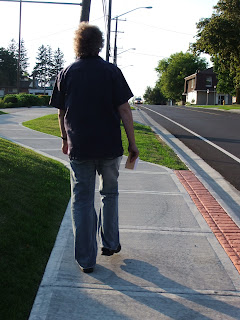 "We stopped to chat to some people that owned this little dog named "Stella" as we made our way to mail our letters at the Post Office.  What a "look" was she giving us!" 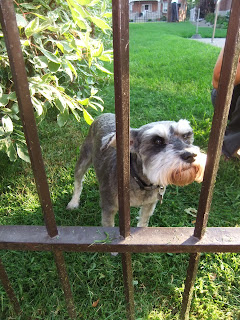 "We came past the local bakery/pizzeria." 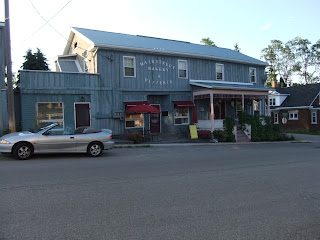 "Where Bob went in to inquire about the price of butter tarts and we picked up a take out menu for their pizza (just in case)." 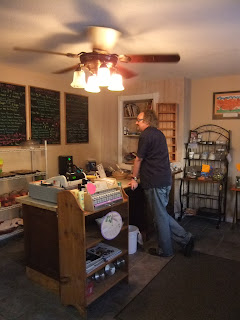 "Just around the corner is a shop that does stained glass and pottery." 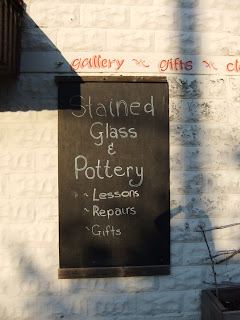 "These are just two of their outdoor displays in the windows." 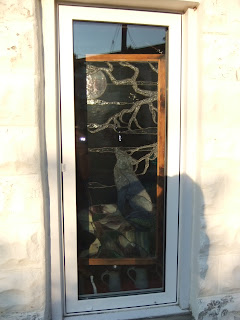 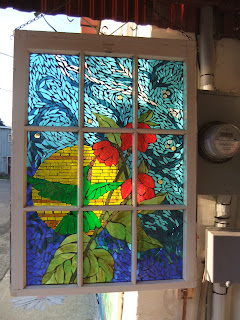 "We never got to go inside as they were closed, however I was quite impressed how they advertised that all their wares were Canadian made." 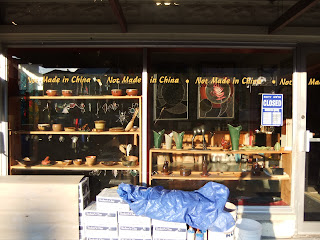 "Clicking" on the pictures to take them into another window will enlarge them.

Just beside the stain glass/pottery shop is the New Dundee Emporium, where we did go inside and browse for a bit.

"The woman's clothing and accessories are "amazing" in this store." 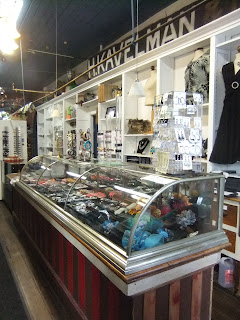 "I know the Emporium's wares are amazing as Bob bought me a lovely handbag while we were there." 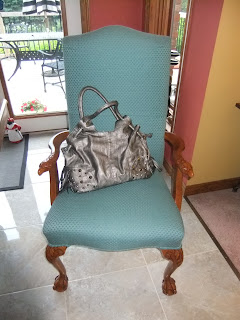 We made it just a bit further up the street where.....

"I thought this little brownstone duplex was absolutely so cute and cozy looking." 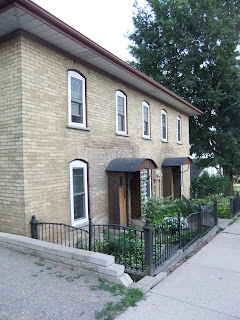 We finally made our way back home, just barely back inside the house, when who came to visit but....

"Two little munchkins who both Bob and I were delighted to see." 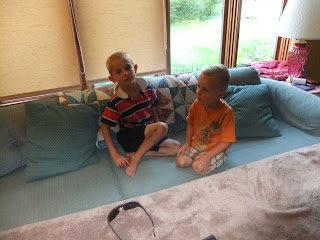 We had a fun visit, but a short visit much to both mine and Bob's relief, as he had to get to bed to get up early to go into work at the hospital where he works for his first 12 hour shift back in for the week.

We both retired ourselves for the night.  I managed to get at least four hours sleep again last night, but not until after I had spoken with my most favorite "Crabby Cabbie" Rob to make sure he was eating and Bandit and Lexus were both fine.

*Sigh*  Here I sit this morning, Bob gone to work two hours ago and me just thinking about having that second cup of Java, away from my home, "Just North of Wiarton & South of the Checkerboard."
Posted by Cindy@NorthofWiarton at 8/13/2011 08:59:00 am