Another Busy Day Gone To The Dogs

"So begins my day, yesterday, "Just North of Wiarton & South of the Checkerboard"." 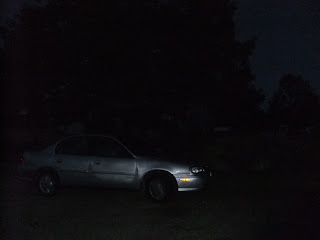 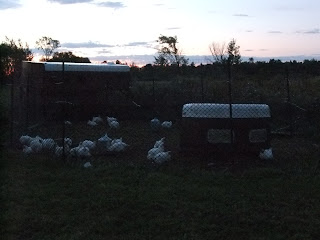 "I am waiting and waiting, as my life unfolds further......" 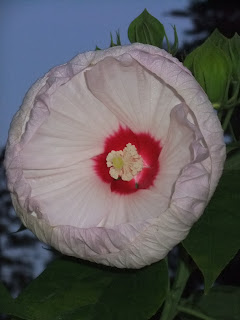 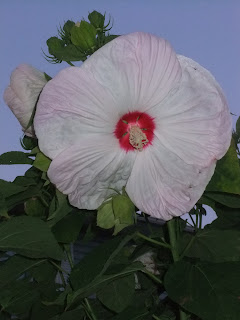 "I find myself lurking around and almost giving up, until I spot her......" 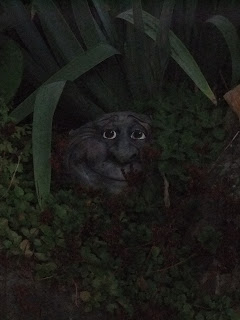 ".... finally driving into our driveway.   *Sigh*, my sidekick arrives.  "Hey, woman it's about time you got here, I was getting tired of lurking around in the dark !" 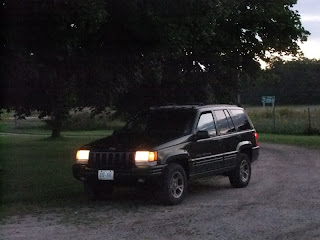 Ha,ha,ha....my girlfriend, Reenie arrives shortly before 7:00 a.m., and off we go down the road into the rising sun on our way to the Keady Market.....hooray !!!  I can't believe we had only see each other the week before, and still hadn't run out of things to "yak" about, so that made getting to our destination seem to go much faster....lol.

It was totally "awesome" arriving at the Market so early, as we got front row parking and lots of elbow room while we took in all the vendors.  We were on a mission, so up one side of the rows we went, only to go back to where we had "spotted" the best deals to make our purchases from.

"We were able to easily sashay ourselves up the main vein of the Market with much ease." 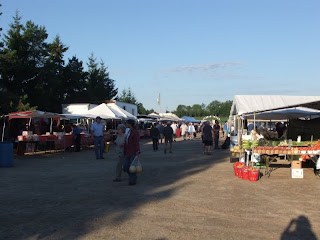 "None other then my Cousin Vi, and her "wonderful" older husband, Ross." 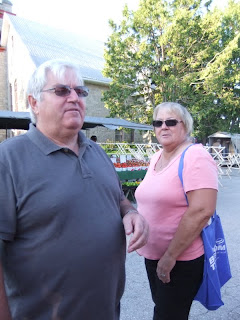 LOL, oh I am sorry, Ross, you weren't that old in this picture yesterday, as I heard today is actually your Birthday....."Happy Birthday, old guy, I hear you are officially a "senior" today !  Go easy on all those new "discounts" you qualify for now...... also go easy on my Cousin, who is much younger then you, or so I have been told .... lol.

I also ran into, Gayle, another acquaintance from Wiarton, who I was also delighted to see out and about in my travels.

While Reenie, was occupied elsewhere, I got talking to a lady, in the barn where the small animals used to be kept, who had some aerial pictures of the Keady Market in her office that she was more then happy to show us.

"From a bird's eye view, this certainly gave us a great visual on how the Keady Market looks from up above." 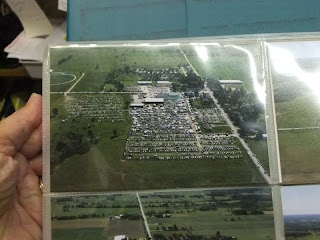 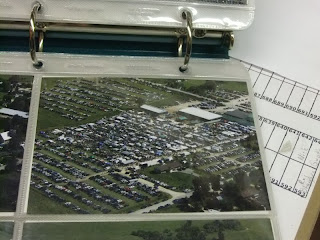 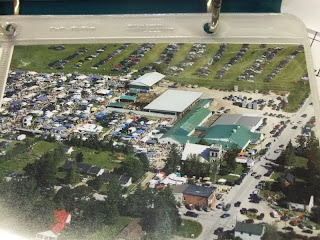 As we made our way halfway back to our vehicle, we needed to stop at the Vendor who sells the really good "Italian" bread.

"This lady was a lively as a "Mexican Jumping Bean".  The life of the party she would be !  LOL, we certainly enjoyed being in her presence." 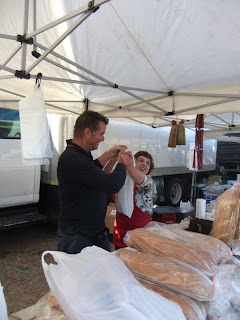 After we made a trip back to the car with our packages full of Musk Melon, Italian breads and meats, cauliflower and radishes, we made a second trip back for peaches and pickling cucumbers, before we headed back home.

"We got home and all Reenie's purchases transferred over to her vehicle, but not before I cut her some fresh dill from the garden for her to make her Garlic Dill Pickles." 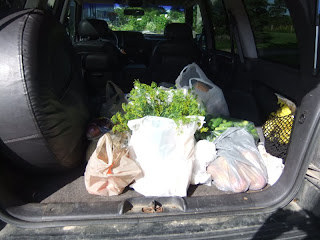 I think it was just after 10:00 a.m. when we arrived back to my house.  When we got there, Darol was gone to visit his brother, who also happens to live on the other side of Colpoy's Bay in Wiarton, so Reenie came in and had a coffee with Rob, Delores, and I before she headed off back to her own home.

Just after Reenie had left, our friend, Dean, pulled in with a trailer to leave for Rob to load with hay he had purchased from us, and then Rob's cousin, Joyce, pulled in to stop by for some Zucchini I had for her.....lol, it was quite the revolving door at this time, as Darol had also just returned back just before Joyce had arrived.  While we were all sitting having our coffee, another guy stopped by to see Rob, as he was looking for some type of equipment, thinking Rob might know where one could be found....

Before I knew it I was seeing Joyce out to her car, and it was almost 12:30, and we had to have Bandit and Lexus to their appointment with the Vet, which is located just over a hour away from our home....  It was a "quick" goodbye to Darol and Delores, telling them to make theirselves some lunch and call when they arrived back to their own home.  Nothing like literally running out on your Company is there?  LOL

Bandit and Lexus love going for any type of a vehicle ride.

"However it almost looks like Bandit was saying to Lexus, "I don't think they are just taking us out for a pleasure drive?" 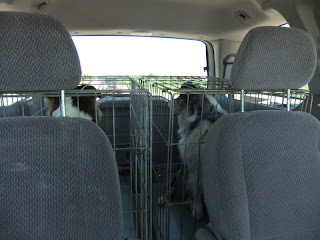 "Oh well, we are here now, so we might as well just enjoy the scenery." 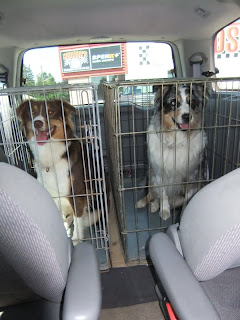 We made it to our Vet's in Mildmay just ten minutes later then our scheduled appointment, which was okay, as they didn't take us in right away anyhow.

First off came the weigh in.  I knew Lexus was starting to get to be a little pork chop, but a whopping 46 lbs., with Bandit coming in 10 lbs. heavier at 56 lbs. !  Wow, almost just like an old comfortable married couple like Rob and I, are they not?  LOL.

They were both very well behaved, which impressed the Vet, and we all came away from the Vet's with it being a very pleasant experience.  Once we finished up with the paperwork we made our way back home.

"Bandit is giving me the, "enough with the camera already" look." 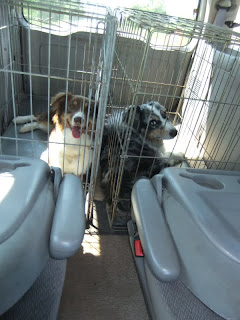 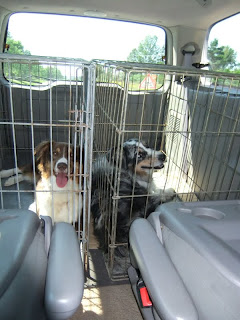 *Phew* by the time we stopped in Hanover at the Canadian Tire for some floor matts for the van, in Scone at a farm for sweet corn, and for a french fry at the Hell of a Fry Chip Wagon (which I might add we didn't find to be that good, especially not as good as the Chip Wagon going into Tobermory), we didn't arrive back home to our place until 4:55.

I was pooped, my eyes were at half mask, and other then having some play time with Bandit and Lexus (separately I might add), I called it a day.  So from the lurking at the start of my day to half masked droopy eyes a the end of my day, my day still ended up "going to my dogs", who I would not give up for all the World.

Here I sit with a "brand" new day and hopefully another "adventure" awaiting for me somewhere ahead, but first I must check out what kind of weather I am going to have go along with it.