A Day Chock Full Of Pictures !

Wowser wasn't that some "hot sticky" day out there yesterday ???? I am still not complaining, especially after 7 past and very long months of Winter behind me.  We actually had a wonderful soft caressing rain in the early morning hours, which I am sure was embraced by every living thing outdoors that needed quenching.

Not sure if it really has cooled down much this morning, but best start out the day by checking what the weather holds for the day ahead.


Today:
Showers with a few thunderstorms ending early this morning then cloudy with 40 percent chance of showers. Risk of a thunderstorm this afternoon. Temperature steady near 22. UV index 4 or moderate.

A severe thunderstorm watch in effect, of course our hay is laying in the field still unbaled....what perfect timing!  NOT !!!  *Sigh* typical of my life some days with an uphill battle....lol, but how boring if there were not a battle, I could also ask myself?

What a day did Rob and I have yesterday !!!  We barely stopped for a rest other then the driving from destination to destination in the car, air conditioned car I might add.

First of all we had to go fill up the car, so we decided to do so at Southampton's First Nations.  Since my Aunt Gerry and Uncle Reg were in Port Elgin visiting Aunt Gladys and Uncle Basil, I thought we had best drop in to see them since we were so close. 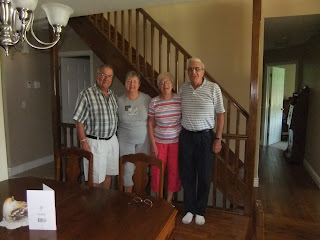 Uncle Basil and Uncle Reg holding their horns in....oops I mean two thorns at each end of the two roses, Aunt Gladys and Aunt Gerry in the middle.  Seriously though, nobody has no idea of how many pictures I had to take to get them all to "smile" at once !!!  Really some people never grow up !  LOL

Rob and I had a great visit with my two Aunts and Uncles; it is always fun to be around them.  I suppose we will all be together in three weeks for the Masterson Family Reunion.

We left there to go on to meet Paul halfway to pickup Aiden for his week of holidays with us.

"The halfway mark between New Hamburg and Wiarton where Paul treated Mom & Pops for Lunch." 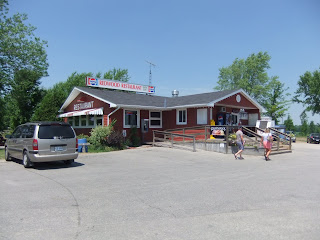 For anyone who likes Liver & Onions, "let me tell the World", they make them the absolutely "best" I have ever had at the "Redwood Restaurant" in Clifford, Ontario !!!!  The beef liver is from a local farm, and cooked to perfection then smothered with fried onions.......yummy.  Well worth the stop for the liver & onion lover.

"There is also a "play area" for the children or to exersise the dog." 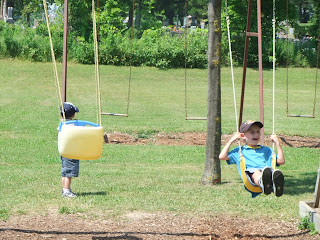 "Goodbyes were made before we all went our separate ways." 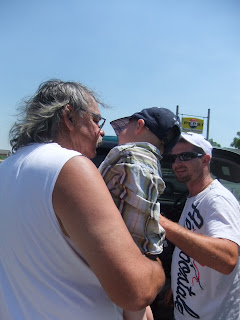 Rob and are are participating in the Explore the Bruce Passport, with one of the stops being in downtown Chesley we stopped there to get our "punch" since it was on our way home.

"Just outside the local Chesley Museum." 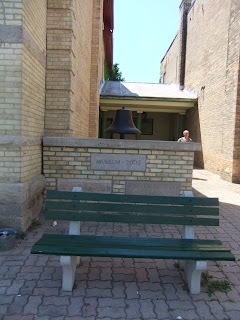 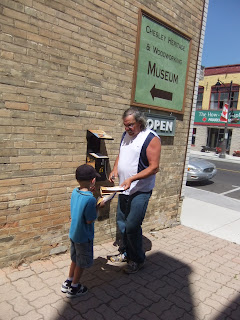 "Since we had never been there before, we took the time to take a little tour." 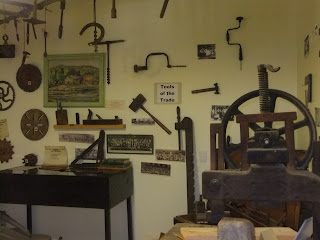 "Could you imagine having a "Marriage Certificate" of this size, mounted on your wall as a daily reminder?  LOL." 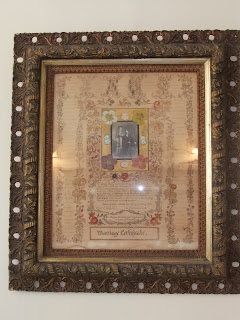 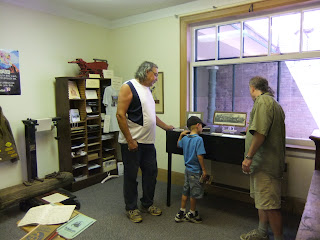 "This picture was in every school I have ever been in." 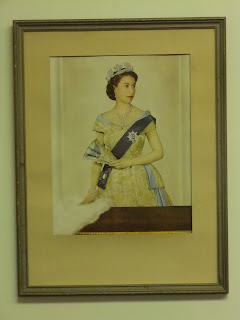 "Not too sure why, but they also had an African display there as well." 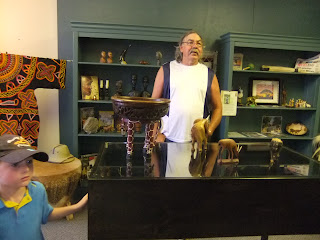 We took our leave of the museum, further up the road in Elmwood, stopping at a place which was advertising "Pond Fish".  This was an absolute stop for Rob and Aiden !
"Here is Rob doing his "style" of fishing.....lol." 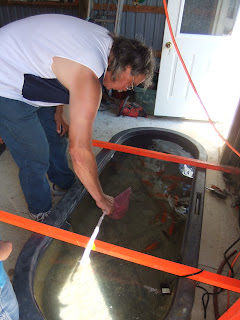 "We finally made it home safe and sound, with the Goldfish in hand." 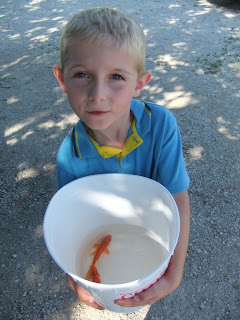 "The best part of all enjoyed by Aiden and Poppa....the great "release" ! " 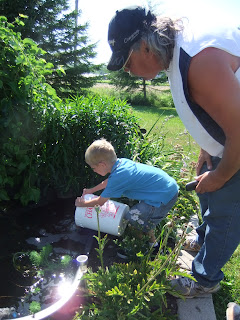 After all that action, you would think we would have had enough....but "oh no", after supper we decided to go for a walk down past the Wiarton Marina.
"Getting a picture taken with the new chainsaw cutting of Wiarton Willie was a must !" 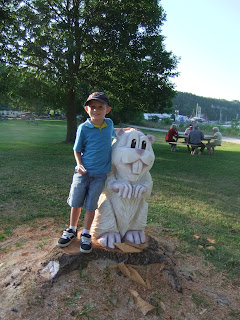 "This is a picture of contentment I won't see too much the week ahead.....lol" 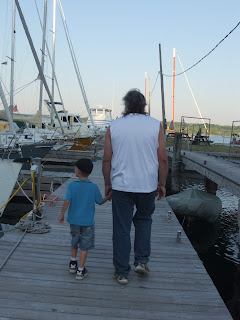 "I was so very lucky to catch Mama Duck and her babies all together." 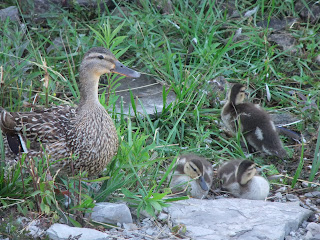 "Once they took to the water, her seemly turning around to do a head count." 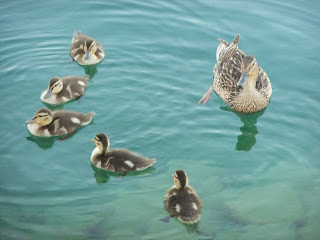 "We were even able to find my Cousin Vi's daughter and son-in-law's new boat, "Knot Yet", but alas they were Knot yet home." 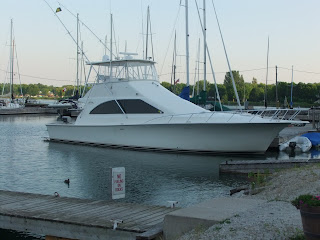 "At the end of our destination, before turning back, the three of us took a rest." 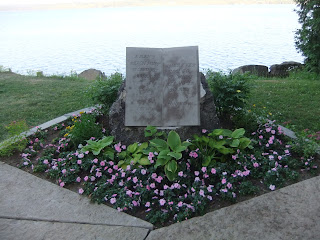 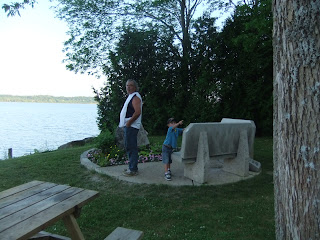 By the time we got back home it was 8:00 p.m., time to take the laundry off the line, have an ice cream cone, a bath and be in bed by 9:00 p.m..  I am sure it didn't take too long for the three of us to all be fast asleep.
The Bell Repairman has been here and gone, since we had been having problems with our phone line since last Friday.  It is now repaired and we are able to once again receive phone calls.  It was rather unusually quiet around here on the weekend now that I think about it.....not to bad at all !
Aiden starts his first morning at the Vacation Bible School, and I am running late since the phone repair set me back a bit, so here I go, once again, off and running, "Just North of Wiarton & South of the Checkerboard."
Posted by Cindy@NorthofWiarton at 7/18/2011 08:46:00 am