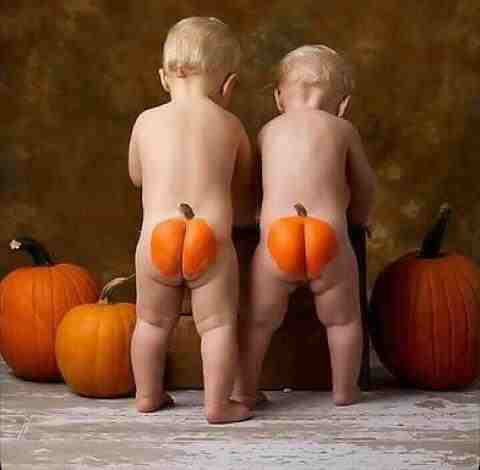 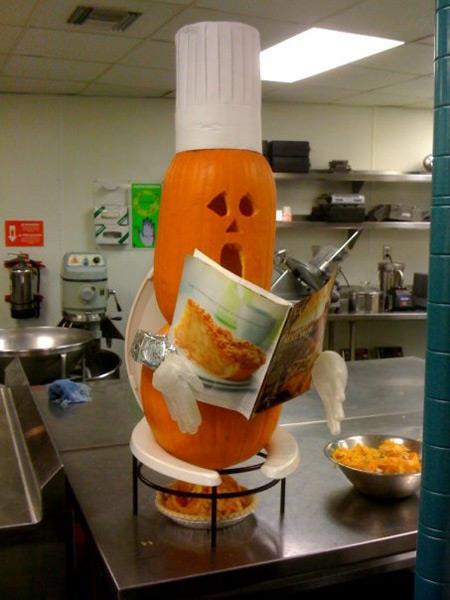 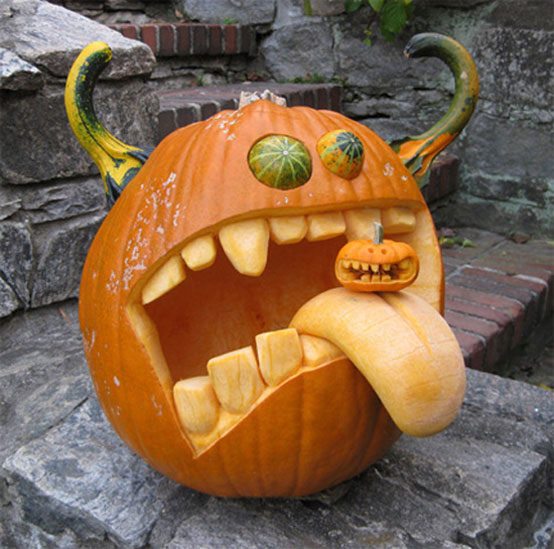 I LOVE Halloween so much I couldn't resist sharing so many Pumpkins.

For months I had been looking forward to heading South to spend Halloween night with the Grandchildren.  I was all showered and revved to go when Rob arrived back home from his daily morning run "sicker then a dog".  He was burning up and feeling totally dreadful.

I could not go and leave him alone feeling so sick.  I called the kids to tell them I wouldn't be down. We were all disappointed, but still understood and really wanted Rob feeling better.

After an hour or so of laying down Rob told me he was feeling much better and for me to go ahead down, but what he had done was tried lying to me as he knew how long I had been looking forward to Halloween with the kids.  I stayed home, and there will be other times. (don't say anything, but do you realize how miserable a sick MAN can be???).

Today I started Rob on something I have been taking for sometime.  Ground Flax Seeds.  I usually mix it in with my cereal, or more recently 2 tbsp. into a cup of low fat Yogurt.  The benefits of Ground Flaxseed are amazing, being a good source of Omega 3 and high in Fibre.  Not familiar with the benefits of Flaxseed? just *click* HERE & HERE to find out more.

Still, thanks to technology, I was still able to see the grandkids, or at least some of them as I haven't seen photos of Chase or Greyson posted yet. 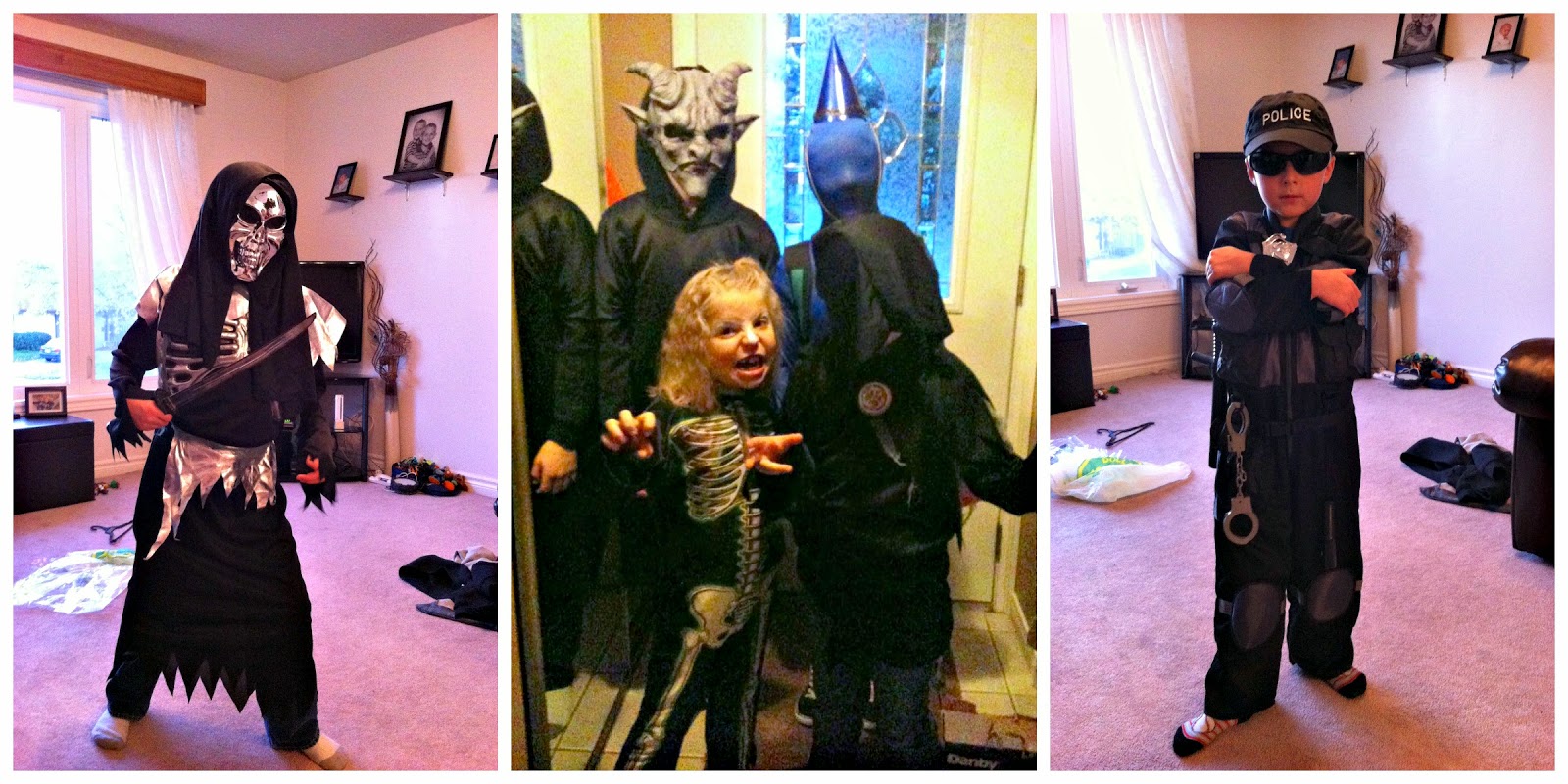 Hopefully I will get more photos later on in the evening.  Halloween is the BESTEST !

The other day Rob picked up the 4 year old Whirlpool Fridge with bought to replace our 16 + year old Fridge (the freezer seal started going on it back awhile ago).  We got a great deal on this model... 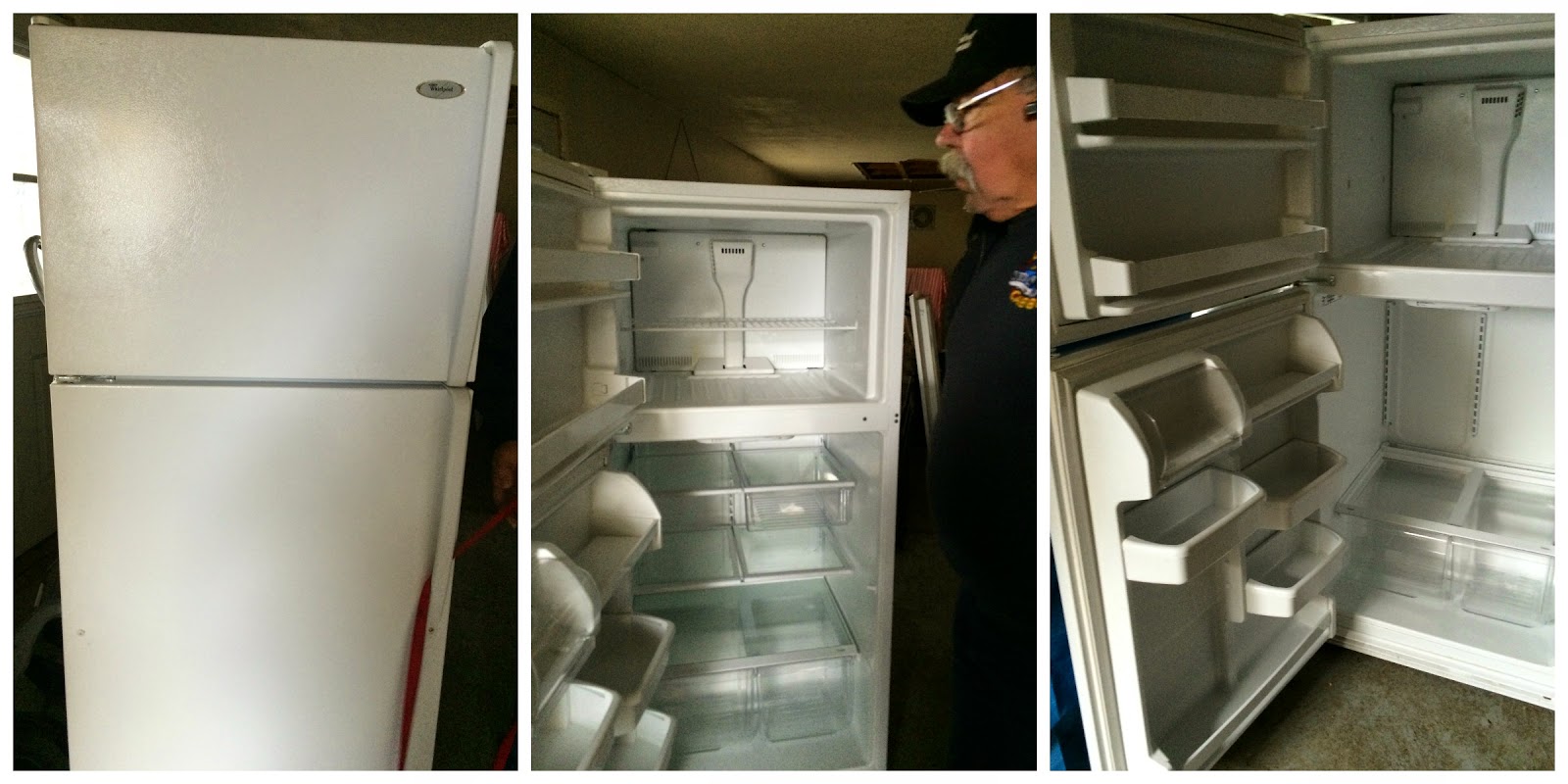 A couple of weeks ago Portia had chewed my very expensive Bluetooth Jabra that was to last me a very long time.  I did find another Bluetooth at an extremely low price, but I can not handle the ear bud in my ear.  I went online to Ebay and found the same model of Jabra I had, at a fraction of the price in the stores here.


I ordered it from Ebay and it had been delivered Priority Post within a week.  Really with its cost, shipping & customs it was less then 1/2 price.  Yes I am being more careful of putting it up when I am very very tired... 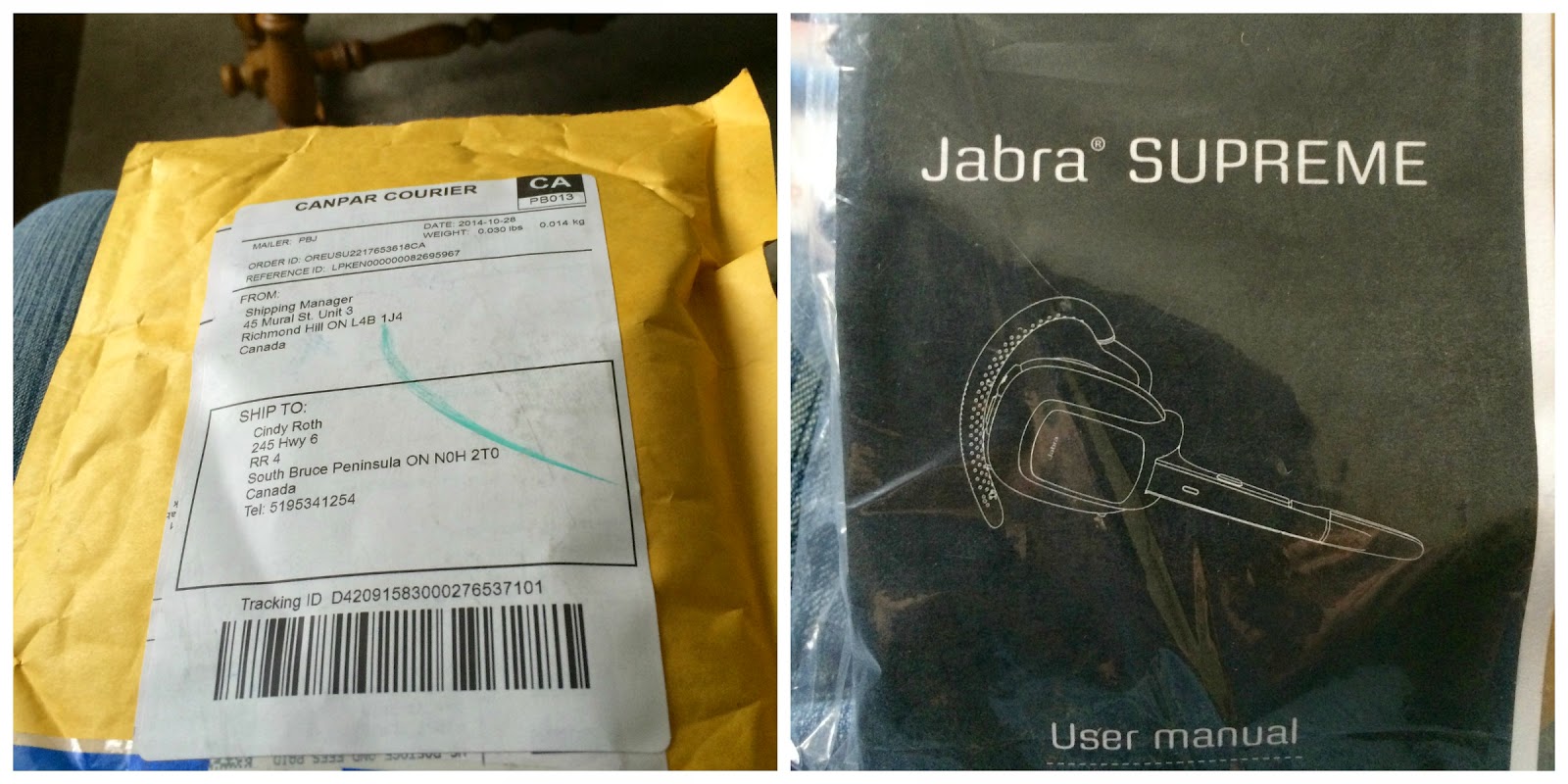 What a blustery Halloween evening it is going to be for the children out and about Trick or Treating.

The North East winds blew our Rocker right off the stoop, and this afternoon the flurries began. 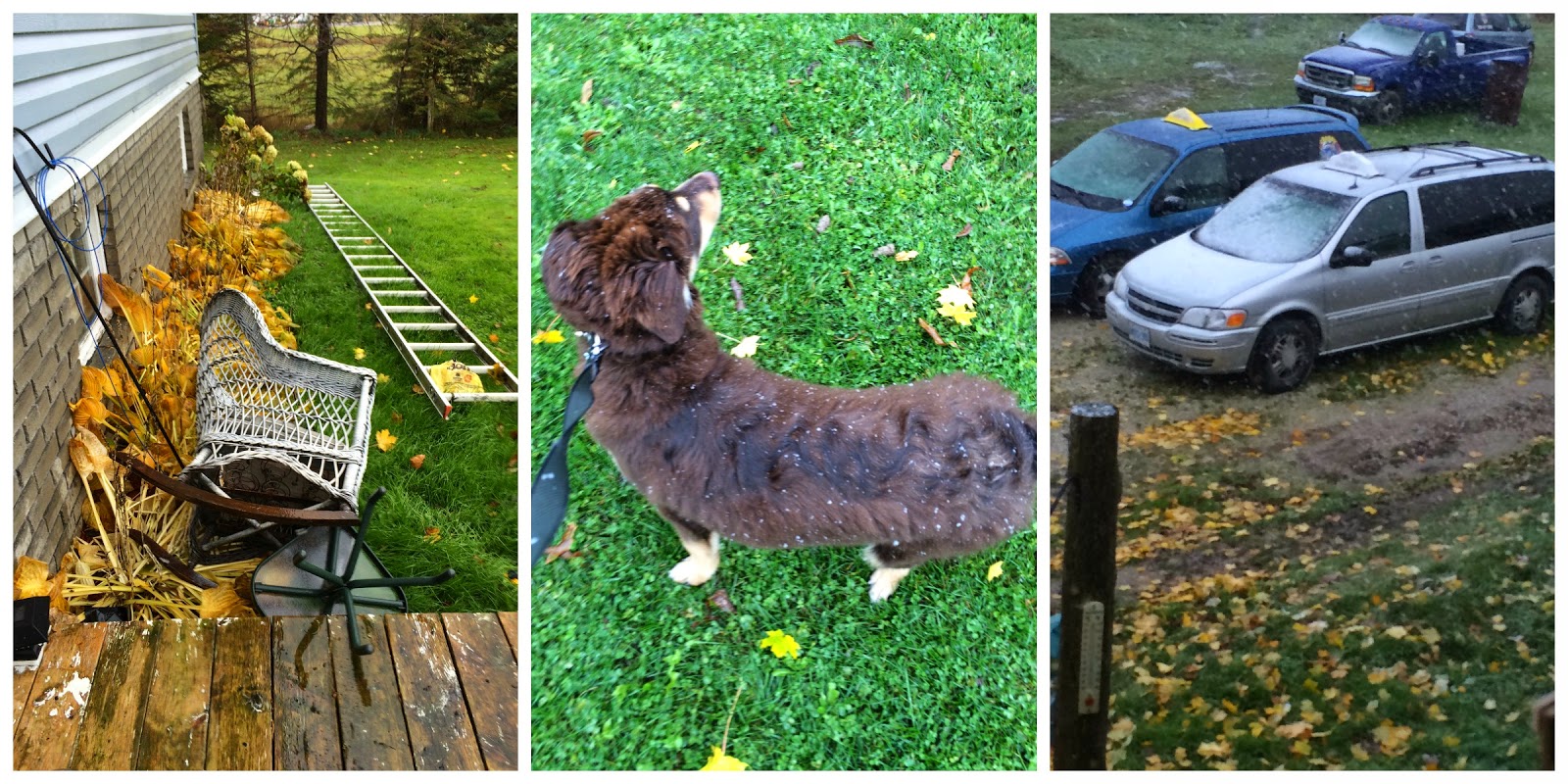 October is really going out with a "BLAST" !  I am thankful we are toasty warm inside with the wood stove fired up.

Maybe it is just as well I stayed home today with Rob, as it being month end I have billing to do tomorrow.  The never ending piles of Crabby Cabbie paperwork, Just North of Wiarton & South of the Checkerboard.
Posted by Cindy@NorthofWiarton at 10/31/2014 07:09:00 pm