Progress In The Works

I can not believe I slept at least 12 hours last night !  I could not go any longer and went to bed at 6 pm.  I woke up long enough at 9 pm to take my meds, call my son, Paul, and have a bathroom break, then it was back to sleep until after 5 am this morning.

When I got up, I looked after the Aussies, put in a load of laundry, and then thought of going back to bed feeling like my body was weighed down with a ton of bricks.  I somehow managed to push myself and got going.

I was very proud as I made a big dent in cleaning part of the kitchen today, and getting a bit of paperwork done as well.  Yes there had been some progress in the works today.

I also got the new Hummingbird Feeder, I had bought a few weeks ago, unpacked.  I just need Rob to mount the hanger for me to put it on then i will be ready to fill and put out.  I had also sold our Bunn Coffee Maker, since we bought a Keurig it had only been collecting dust on the counter and taking up space.  We really wasted more in it then we drank so it was not a bad thing I sold it.  I also got a huge box of stuff taken to the Sally Ann, dropped off 4 filing containers to my Brother, and got a box of stuff to go out to the RV. 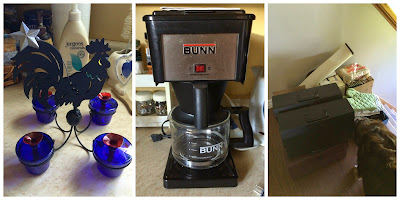 Mid-morning, a Canpar truck pulled in our driveway.  I was wondering what was arriving on my doorstep now.

I could not believe I received the new pair of BOGS already ! now that is Customer Service.  Thank you BOGS !!  I also thought the pair available to me was only in red (not my fav colour), and was even more happy to see they were green.  First thing to check was the nice soft tongue, which should not dig into my legs when wearing.  I would never hesitate to buy another pair of BOGS in the future, for their comfort, durability and guarantee. 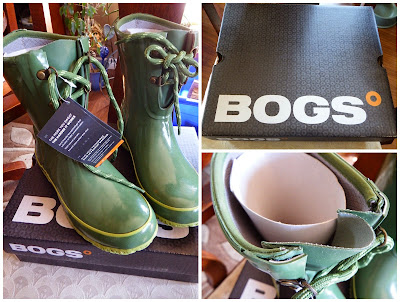 I most certainly had wanted to have a lay down today, but that did not happen for me.  By late afternoon I could barely talk as I had been slurring and stumbling with my words.  Fatigue does get the better of one, does it not?

I had to go downtown to do a couple of errands.  One was to stop round to the Wiarton Chamber office as The "Crabby Cabbie" is to be the Featured Chamber Business this week, and I needed to provide them with a photo.

Outside the Chamber office is where Wiarton Willie lives.  On my arrival I noticed he had been out having himself an early dinner.


He is quite the character some days, although a little discoloured from his long Winter slumber. 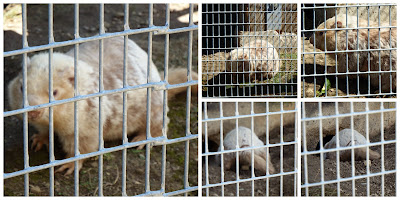 Tomorrow night I am attending the Heels & Hammers at the Wiarton Building Centre.  More details on that by going to their Facebook Page by *clicking* HERE.

Rob got tired of messing around with used Lawn Tractors, and with the size of property we have we do need a lawn tractor.  He went out yesterday and bought a brand new one, since he sold our little Ford 9n tractor.  This one had better last us the remainder of our Lifetime.  At least it came with a 3 year warranty on parts and labour, and it was purchased locally.  More to follow on this new purchase along with photos.