Highlights Of The Day

I feel I slept rather well last evening, until I heard Rob come in at 4 am, but I stayed in bed until 6 am.
After the Aussies were all looked after I got going on the laundry as it was going to be a "hang out the laundry" kind of day.  I managed to get a couple of large loads done (cheap hydro).  Then I settled in to have a morning coffee, or two.

Rob couldn't get to sleep when he got home so I had found him on the couch with the TV going.


Portia also found him and promptly began licking his feet, which he never felt when I asked him later.  When he did get up later he was a Starvin' Marvin, so we ended up having a breakfast at 11:30 am down at the Green Door Cafe.  As usual it was very good. 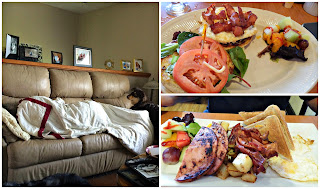 When we got home I hung the 2nd load of laundry out.

Highlights of the Day:


Portia got a "bear bell" put on her collar today so when she is outside I have an easier time keeping track of her whereabouts.  You can tell who is popular with Rob, can you not, as Bandit & Portia were leaning right into him on the front stoop.  Yes I did almost 5 miles today, and how did that happen one might wonder?  Our lawn tractor is broke down (again), and our lawn was getting out of control after all the rain we had.   It took me quite awhile however I got r all done other then the centre of our horseshoe drive.  Another day. 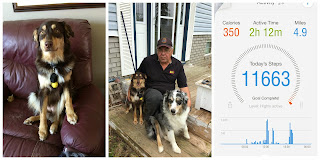 That was pretty much the long and the short of my day.  I have just finished off two cups of my favourite Green Mountain Blueberry Coffee, will be taking Portia out for a big of a run then calling it a night with my feet up shortly, Just North of Wiarton & South of the Checkerboard.
Posted by Cindy@NorthofWiarton at 5/17/2015 08:31:00 pm