Last night, just before 10 pm, I got a text from my niece, Joanne, that she took my sister, Jeanne, into the Wiarton Hospital.  She had fallen about 4 times yesterday.  It just so happens her family doctor was on call in the Emergency Department.

I went up this morning however Jeanne was sound asleep.  I went back an hour later and actually seen the Doctor, who told me she was going to be admitted for a couple of days as she was extremely dehydrated.  She was getting over a bout of pneumonia so it could all be related.  My brother, Al & I, went back up mid-morning briefly so Al could offer her husband, Cecil, to stay at his place while she was in the hospital.

I just got another phone call this evening from my other sister, Donna, that her husband, Wayne, was taken up to the Emergency Dept in Kitchener by their daughter, Jodi Lynn.  He was running a fever all day, achy and had a bad rash on his leg.  Oh my goodness he had gone through a life threatening bout with a staffa infection in his leg last Summer, the worse case they had ever seen.

Donna will call me back in an hour or so to give me an update.

My Rob was feeling under the weather today as well with a headache, sweating and dizziness.  This getting older is for the Birds !!!!  and our family is falling apart, seemingly all at once.

Today I only managed to get our bedding striped, washed and line dried, and the steps/foyer all cleaned and scrubbed.  Better then nothing I suppose.

This afternoon Rob was out on a couple of calls.  Late this afternoon he was called out to Owen Sound so Bandit and I went along with him.  Unbeknownst to our dear Bandit, he was going to the Pet Wash.


Bandit is now "fluffy, not stuffy", although he was not too impressed until after it was all over as you can tell by his *smile*. 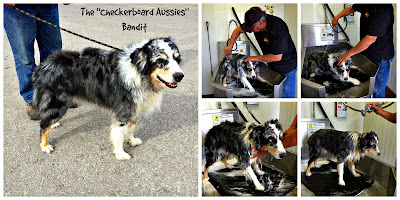 We got back home not too long ago.  I still have to make up our bed with the fresh bedding, so off I go, Just North of Wiarton & South of the Checkerboard.
Posted by Cindy@NorthofWiarton at 5/24/2015 08:17:00 pm