A Little More On This & That

Going back to the Bridal Shower this past Saturday for my soon to be beautiful daughter-in-law, Elizabeth Anne ....

Liz's Matron of Honor, her Cousin Vivienne, booked a room at the Puddicombe House located downtown New Hamburg.  What a lovely place, but then again I LOVE the character of the older homes.  At one time this had also been apartments. 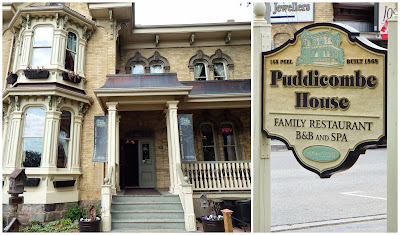 The open-face Chicken Salad was the "special" they had put on for us this day.  The scallops, that look so mouth watering, were chosen off the menu as were some other lunch selections.  Desserts which were chosen by a few of us were the Orange Blood Beer Cheesecake (melt in the mouth so I was told), and a flourless Chocolate Cake with a scoop of French Vanilla Ice Cream.  Everything was excellent to taste and well priced. 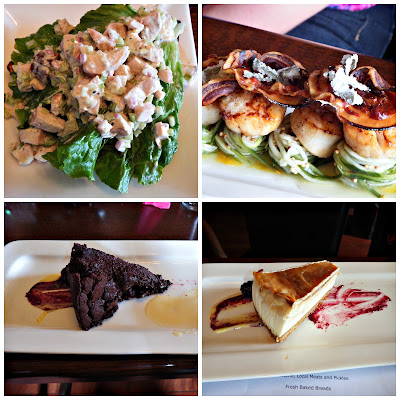 Liz with her Cousins, Vivi & Angela (who will be singing at the Wedding).  Vivi, Matron of Honor & Liz, then Liz's Mom, Jean & the two girls.

We all had such a wonderful afternoon together. 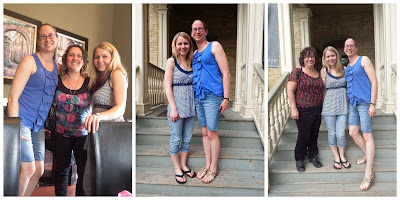 More about the Puddicombe House may be found HERE.

More on the Mother's Day Weekend ....

This is one mug, autographed by Chloe & Briar, for me the day after I had arrived.  It is so nice to have such delightful Granddaughters in our lives now. 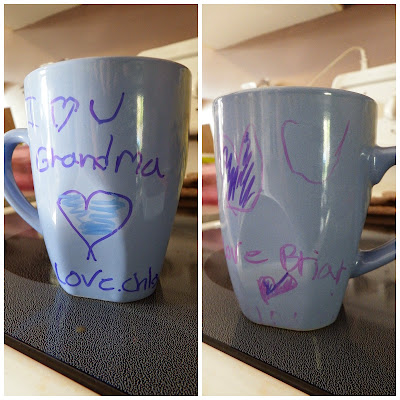 Sunday morning, our grandson, Aiden, was telling me he would love to contact Adam Levine on the Internet to ask him come and play his song, "Sugar" for his dad and Liz's Wedding Day.  On Aiden's behalf I sent the Maroon 5 off a note, as follows: 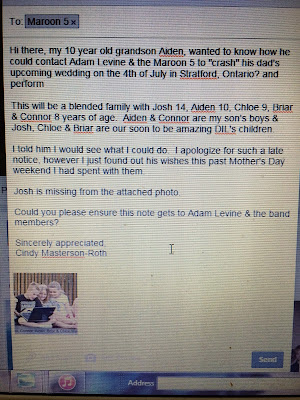 Should I ever hear back I will followup with a post on it.  Really it would be something else wouldn't it?  Here is what Aiden was requesting:

Yes I was busy trying to get "caught up" AGAIN.  I managed to get some laundry sorted and the bedroom somewhat organized, the fridge cleaned out, dishes done up and some vacuuming done, which was only a tiny bit of what really needs doing.

Darn I sure do not know what had happened to the housekeeper when I was out of commission for 3 days, and gone away for 3 days.  Difficult to find someone you can depend on any more, isn't it Honey Rob?

I did make a Fruit Salad today, and Rob made up some burgers from the Moose hamburg I had taken out of the freezer this morning.  Let me tell you we had an awesome dinner ! 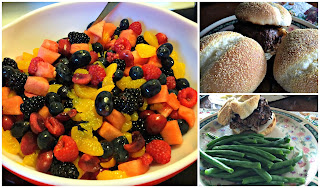 There is five contestants still on The "Voice" this evening, with a couple more to be eliminated tomorrow night.  The count down is on the next two weeks on who the WINNER of this Year's The "Voice" will be, and I do not plan on missing out on any of it, Just North of Wiarton & South of the Checkerboard.
Posted by Cindy@NorthofWiarton at 5/11/2015 07:01:00 pm