How did I sleep on our new mattress last night?  I was much more comfortable then on our old new mattress, however did not feel I got much sleep as per the usual.  Rob?  he said he slept however needs to get used of the new mattress.  I did not feel the pressure point pain as I had in the other mattress, so in my books this is very very good.  I believe it will be working for us much better then the last mattress.

I had gotten up a 5:45 am to take Portia and Bandit out, with Rob almost right behind me taking Lexus and Buddy out.  I was so terribly tired so I had thought I would go back to lay down in bed for another half hour (something that is very rare for me to do).  I just got back into bed when Rob says, "why are you back in bed, what was the point of me getting up?"  Hmmmm how is it I will be up anytime from 5:30 am taking Aussies out while letting him stay in bed until almost 7 am, and I can't take an extra 1/2 hour?  should anyone figure out what went astray in the "wiring" there, please fill me in.  *smile*

Today was mostly about my "Crabby Cabbie".  While he was gone on his usual morning run, I did Crabby Cabbie paperwork, as well as the normal mundane chores of dishes and making the bed.  I still have to tackle the 3rd Quarter of this Year, but that will be another day .... baaaahhhh.

Right after lunch Rob got a call to take an elderly lady, who he had never met before, down to a City Hospital as she had a severe eye problem that needed attention right away.  He got her down there in time to meet up with four Doctors waiting for her arrival.  Rob went in with her to make sure she was alright, and stayed to find out whether she would be kept or released to go back home.  The Doctors and Hospital staff were amazed at a Cab driver being so caring, which bring me to another aspect of The "Crabby Cabbie" ....


It is days like these that make you feel you are doing Business just right ! 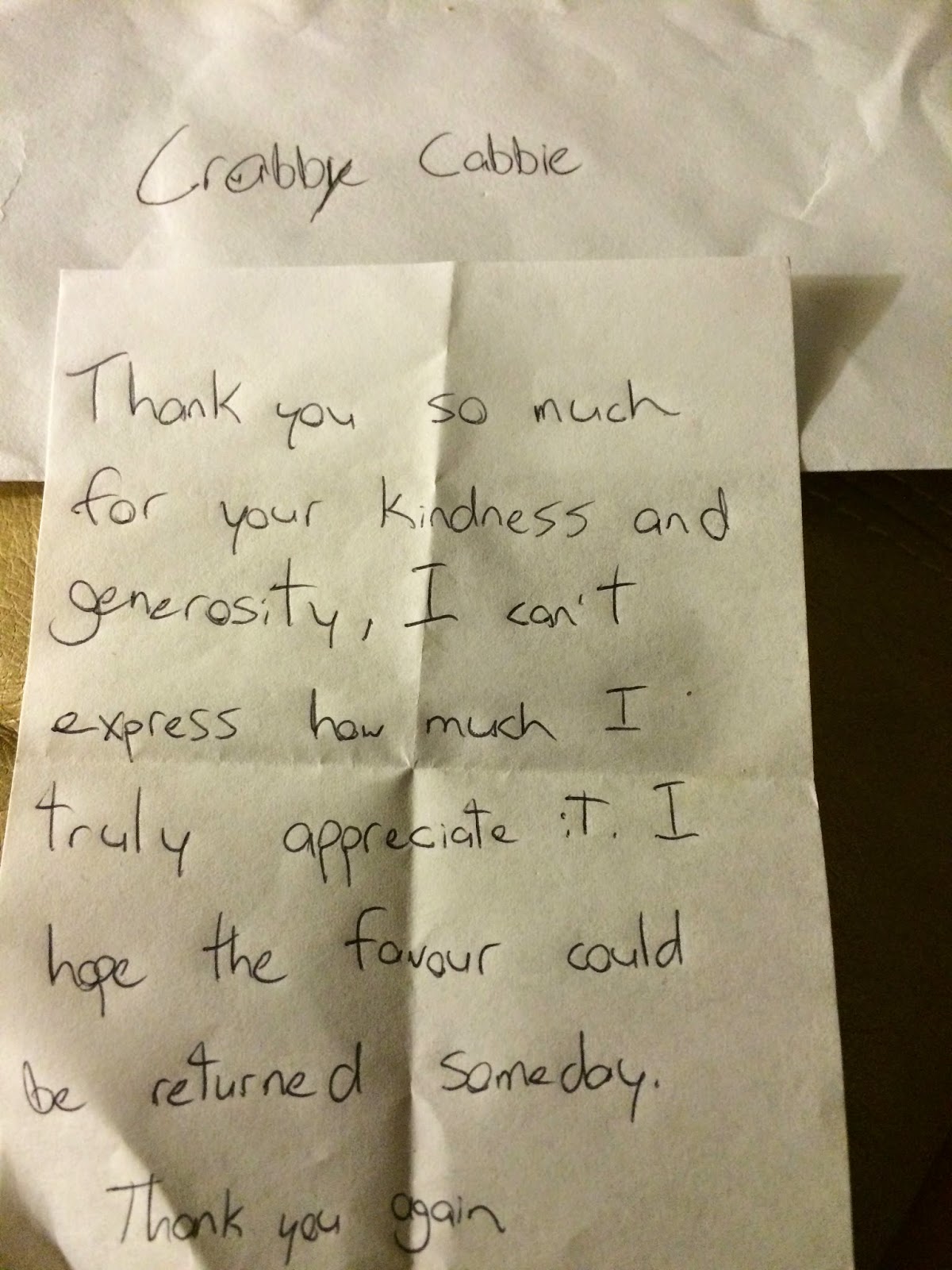 Yes there is many days I am very proud of my "Crabby Cabbie" Rob and how we do business, and that sometimes is enough to discount most of the crappy days that go with the territory.

Rob is on his way back shortly from the City.  Until he arrives back home I suppose I will be, once again, holding down the fort here with our Aussies, Just North of Wiarton & South of the Checkerboard.
Posted by Cindy@NorthofWiarton at 10/02/2014 06:45:00 pm