This morning we readied ourselves, Rob and I, to head down to the Southampton Cemetery to pay our respects to my Aunt Pearlina at a Graveside Service, as per her request.

When I had left the house, taking two separate vehicles as Rob had to leave afterwards to work, it had been pouring buckets of rain, however by the time we had arrived in Southampton it had been barely a drizzle.

The Service had been at 11:00 a with a fair amount of Family and Friends present.  I had also stopped by my Father's grave which was immediately before where Aunt Pearlina was laid to rest.   The Service was lovely, and exactly as she would have wanted it.  As I stood listening to the Minister's words I looked around at the beauty of the Southampton Cemetery with its aging Maple Trees, while feeling quite melancholy and admiring the beauty surrounding us all.  It was quite Peaceful, bringing back the memory of my Father telling me there would never be anyone in the Cemetery to hurt me.  I took comfort in his words many times over the passing Years. 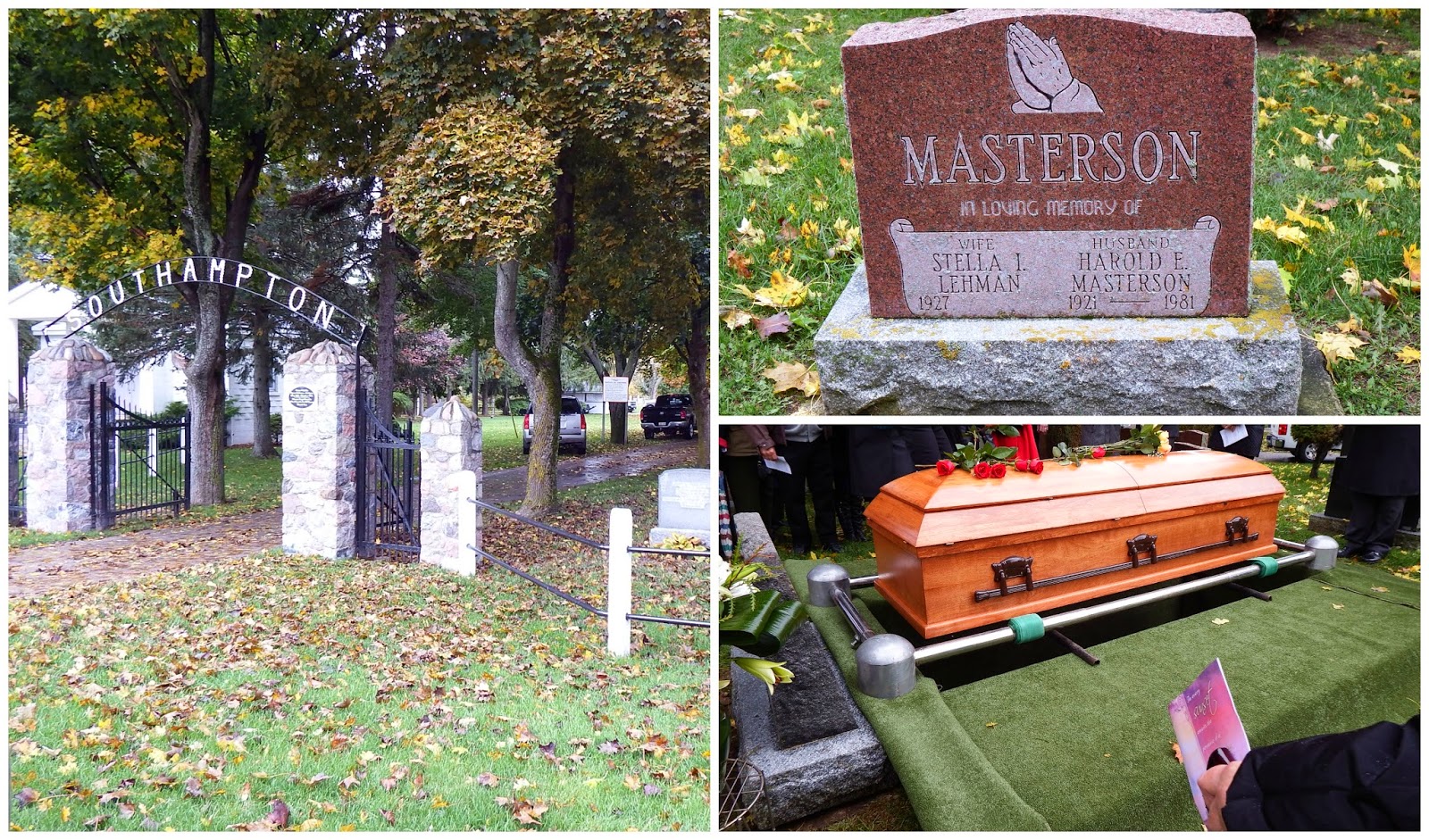 Watching my oldest Sister, Jeanne, take my brother Allan's arm to leave the Cemetery ahead of me made me somehow for some reason feel at Peace inside.  Why I do not understand ... maybe it was witnessing the love between two siblings in at "moment" of togetherness.  Again making me feel quite melancholy. 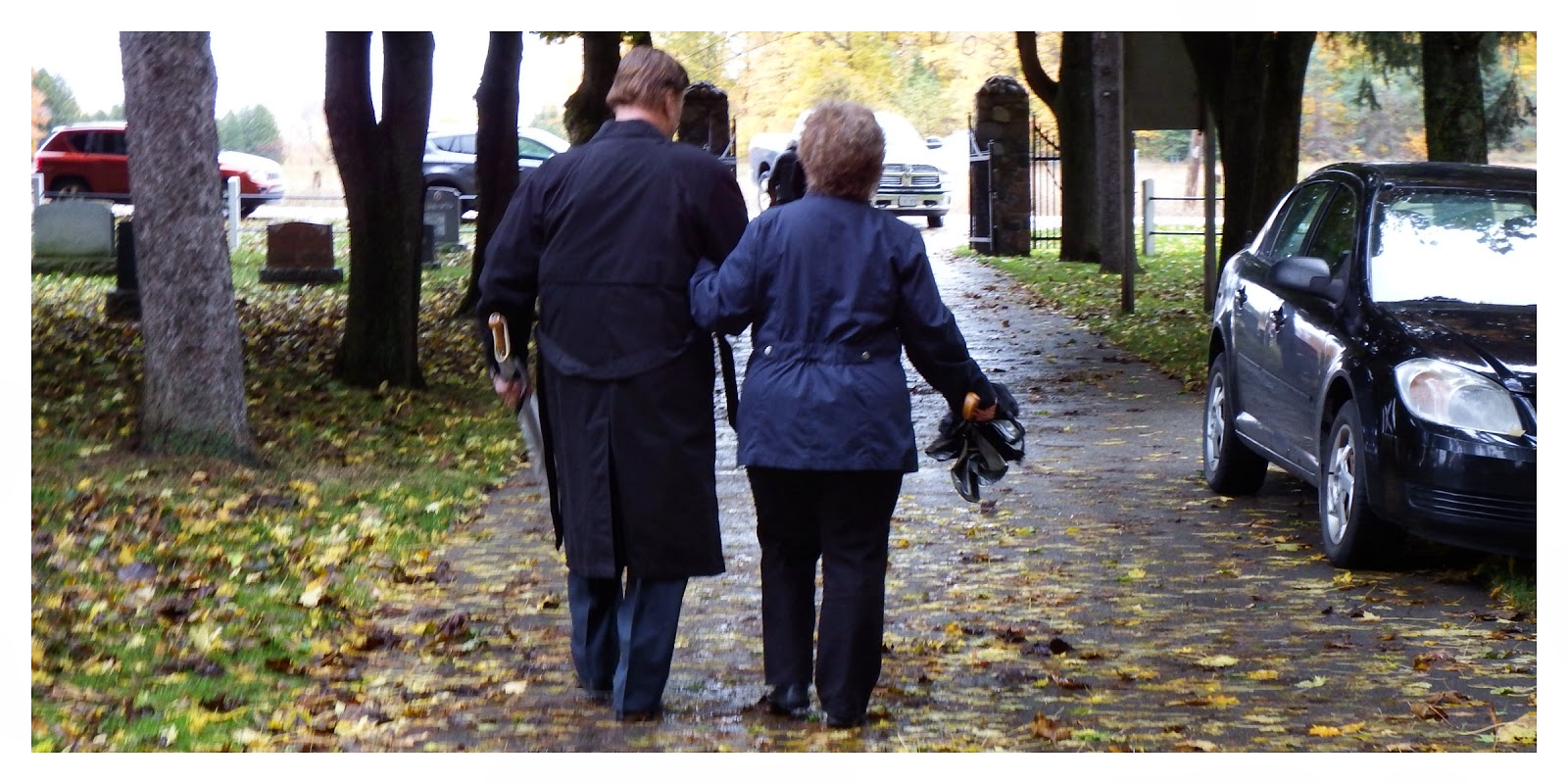 Family and friends had been invited back to Aunt Pearlina's Church, The Anglican Church, where the ladies of the Church had prepared a luncheon for everyone to congregate after the service.

My Auntie Gladys in one photo, who I know will miss my Aunt Pearlina, having visited her almost every week at least once.  Myself in another photo listening intently to a gentleman speak to me, and then my Sister inquiring what her husband  would like in the way of some lunch. 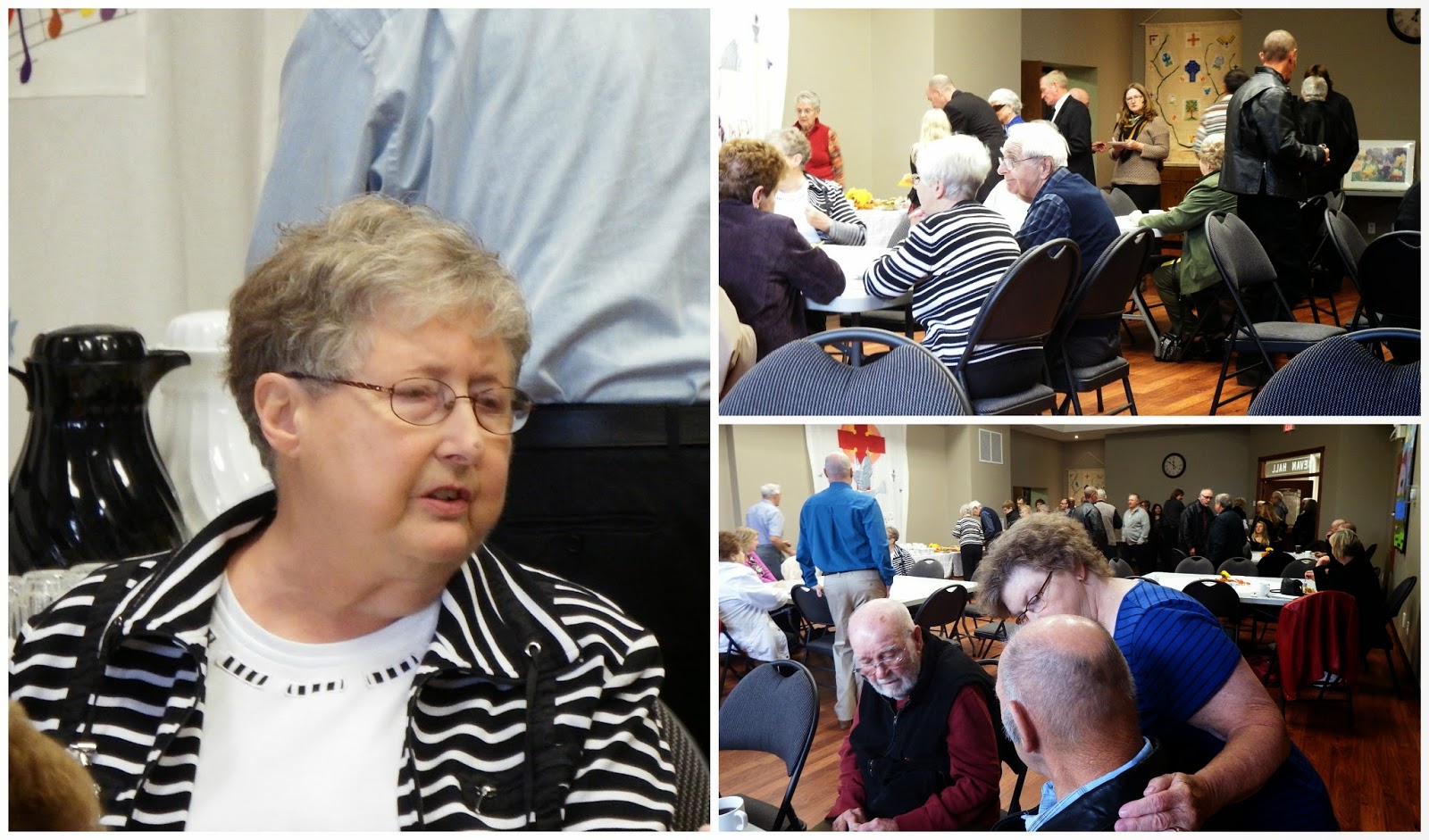 My first Cousins on my Mother's side, who were also Aunt Pearlina's nieces and nephew, had came today to the funeral.  We had not seen each other since their Father had passed way about 19 years ago now (the number of years could very well be incorrect as my memory of the year does not serve me as much as the memory of the event itself).

Here I am with my first Cousins, Vicki, Kim, their sister-in-law, and Mike, then with just Vicki and myself.  It was great to see them all, and from time to time Vicki and I get a chance to chat on Facebook together through Messenger.

Hopefully I see them again before it be a funeral we attend either for our Aunt Gladys Wismer (on my Mom's side), or my Mother.  Maybe they will come up to Southampton next Summer and we can get together with our other Cousin who lives there.

Since my Auntie Gerry and Uncle Reg were up from Scarborough, and staying with Auntie Gladys and Uncle Basil (Aunt Gerry & Aunt Gladys are sisters of my Father), I had thought I should get their photo all together as I usually do when I see them together.

Uncle Reg thought he would "ham" it up in the first photo, then continued into the second photo, but finally the third photo we had him straightened around, either that or Aunt Gerry had gave him a good elbowing !  I noticed once I had posted these photos that my Aunts had dress similarly .  I wonder if that is just the "bond" of knowing between sisters?

I do love my Aunts, and very happy Aunt Gladys is close by always for me should I ever need her.  I will also be missing my Aunt Pearlina very much, knowing she will be on my mind often.

After we all parted to go our separate ways, I stayed in my hometown of Southampton, as I had wanted to go see a friend at her place of business downtown, go to the hardware store to make a purchase of a new kettle, and wait for our Crabby Cabbie driver to show up as I had a pay cheque to pass on to him before I left town for home.


I made my way down High Street, which is the main street in Southampton, to the Cenotaph which looks out over the beach to Lake Huron.  Out from the shore in the distance lies Chantry Island which has always been a picture across the waters.  I do so love my Hometown, feeling melancholy every time I visit there. 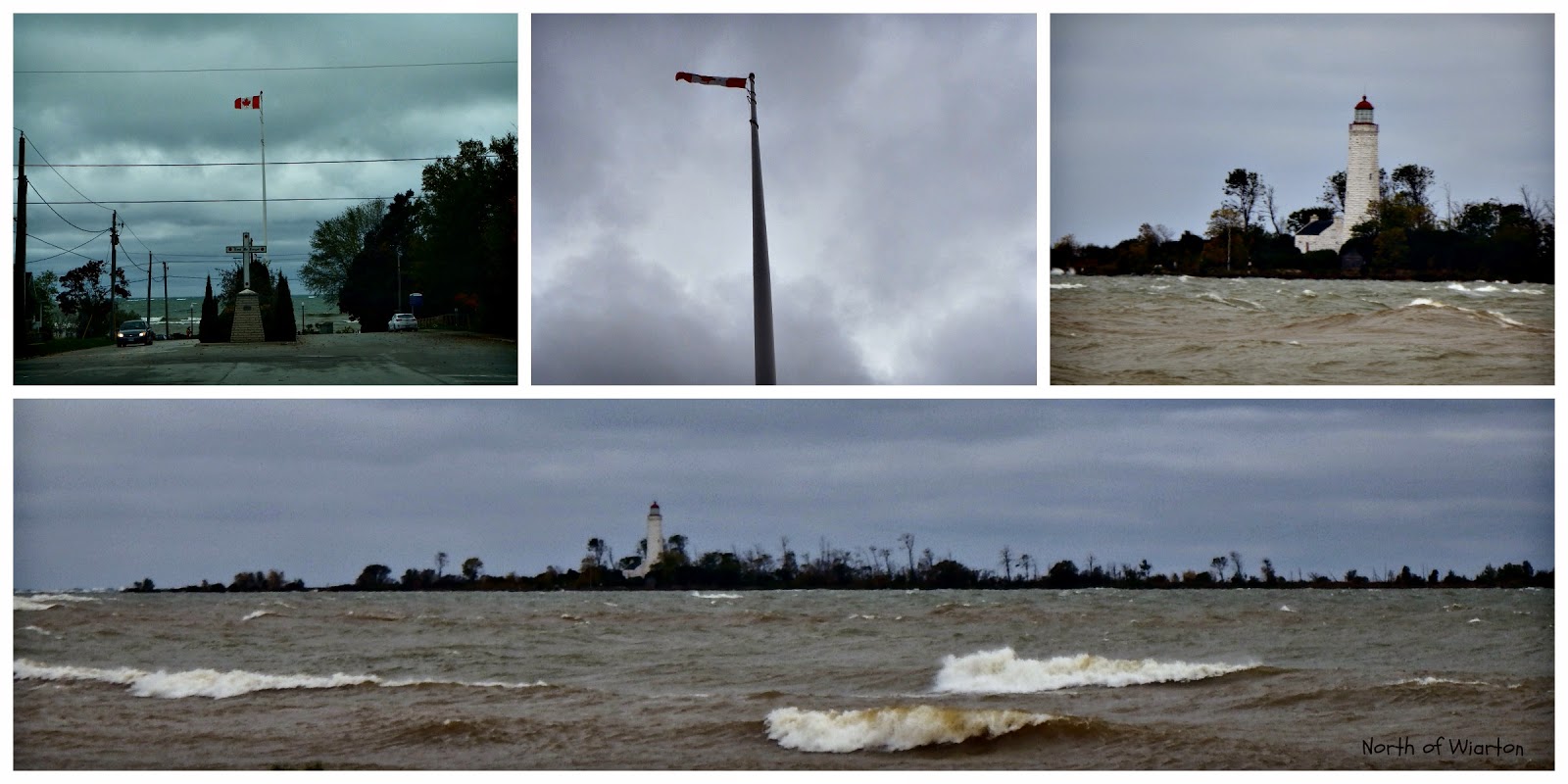 I made it back home before 4 pm after I had accomplished everything I had set out to do plus a little more.

Rob and I were both a little weary, and I really had not felt like cooking with nothing in mind to really have, so after we picked up our neighbour, Pari, from work the three of us headed down to the Green Door Cafe to have Dinner together.


Rob had the 2 piece Haddock Dinner, Pari had the Lamb Burger, and I had the "special" Spinach Pasta with a Caesar Salad.  It was all the usual Green Door excellence, and each dinner was only $8.99 each. 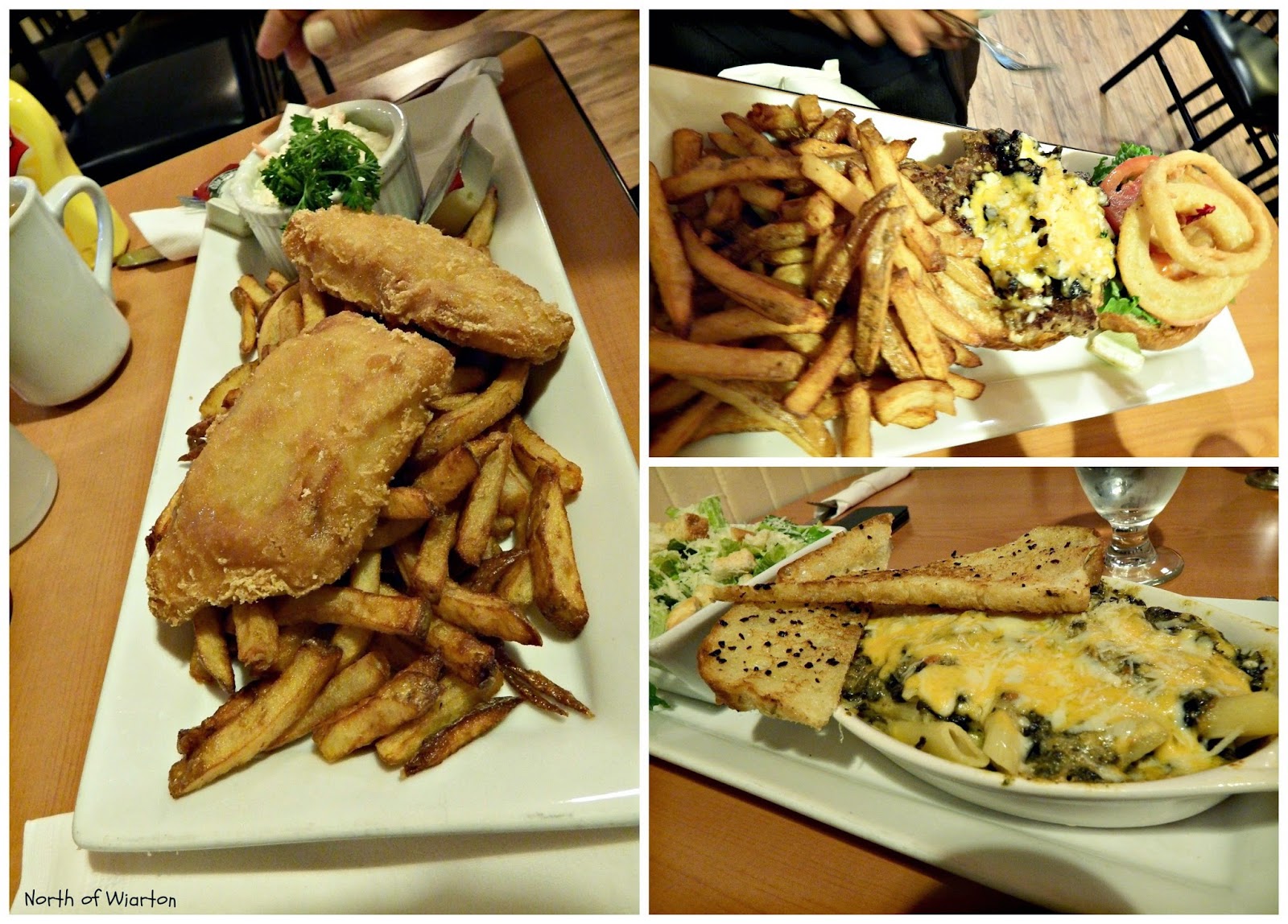 We arrived home to the first time the Sun made its appearance all day, ending the day as it was. 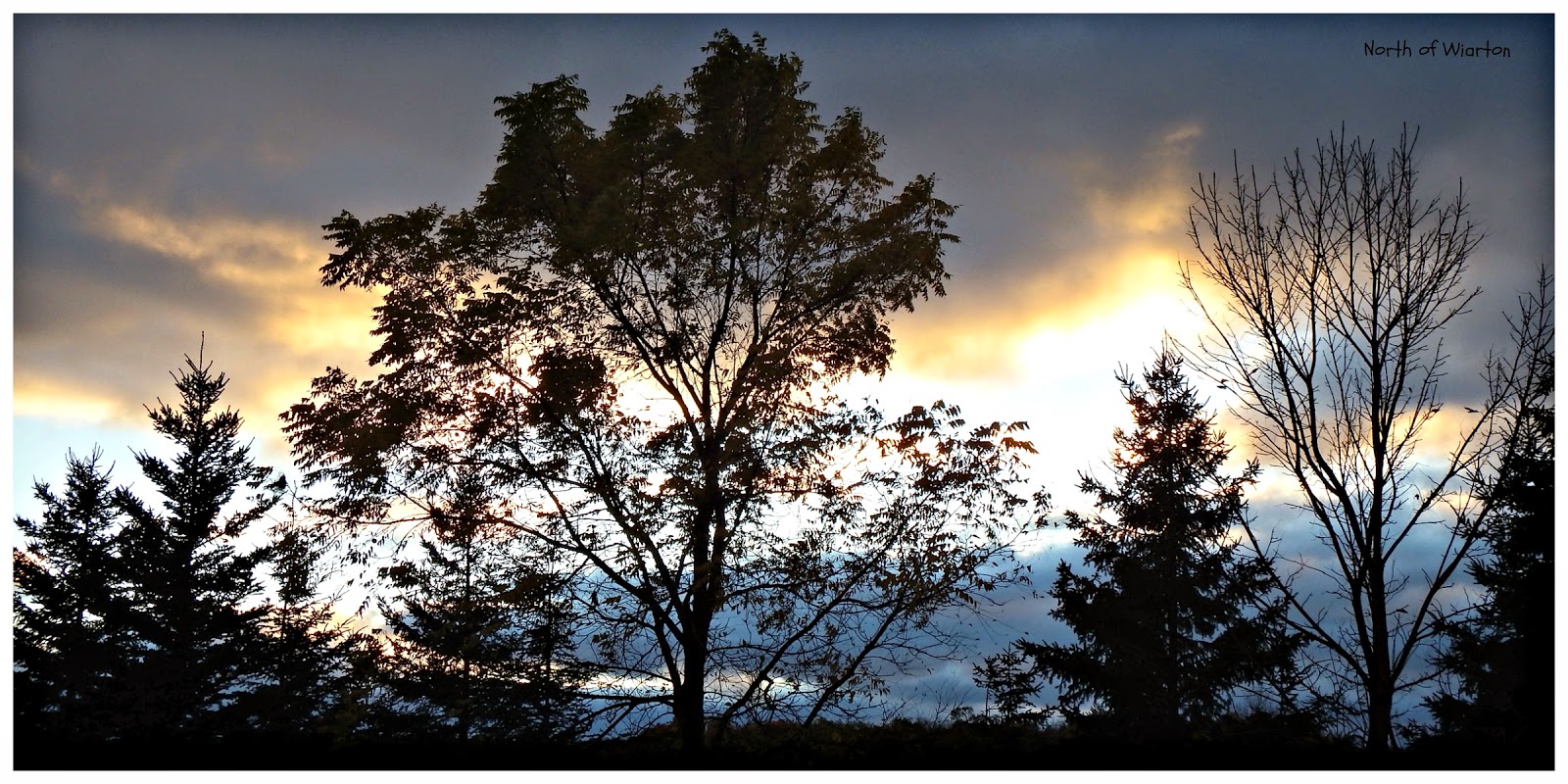 Rob is gone to work, Portia is being a puppy, and Bandit always my protector, Just North of Wiarton & South of the Checkerboard.
Posted by Cindy@NorthofWiarton at 10/18/2014 08:45:00 pm