My feet hit the floor at 5:30 am this morning & I never looked back (except to make the bed, of course).  I had the Lexus and the puppies, oh yes and Bandit, all out and fed by 6:30 am, while Rob took Buddy and Mercedes out for me, since I was heading down the road by 7:15 am.

I stopped at a friend's in Shallow Lake on my way en route to Owen Sound to do a favour for her before I arrived 10 minutes earlier to my 9 am appointment with the Specialist at the Owen Sound Hospital.

Oops best back track a wee bit here.  Wednesday I had a call from Dr. Nari Kaal's Office, Gastroenterology & Internal Medicine Specialist, with his secretary telling me they had a referral from Dr. Caulfield, who preformed my Colonoscopy last Thursday.  Apparently I have a polyp in a very "tricky" spot, hence the referral, since Dr. Caulfield, a General Surgeon, maybe felt more comfortable on my behalf to pass me over to Dr. Kaal.

I met Dr. Kaal at 9:30am this morning.  I have to say my very first impression of this Doctor was pleasant, and was quite put at ease speaking with him.  He explained in details any risks involved, assuring me if he could not remove the polyp by colonoscopy he would do so instead by surgery.  I have been scheduled for another "poopy" ordeal on the 30th of June.

Should Dr. Kaal have time when he is "on call" his weekend at the hospital, he might reschedule me earlier for that same weekend.  I will be happy for this to be all dealt with and over with much sooner then later.  The joys after turning 50 years old !!!

Next ordeal of the day I dealt with was trying to hunt down a Gazebo for our deck.  Our deck faces the South and has direct hot sun all day long, making it unbearable to enjoy sitting out there, so a Gazebo would solves some of this problem.  Canadian Tire and Home Depot both had one on in their Sales Flyer this week.

I thought since Sears was up the road I would stop into there.  They only had them for sale in their catalogue.  I took one along with me so I could call when I got back home.  I did take advantage of buying two extra firm pillows for 1/2 price at Sears.  I am sorry to think the Owen Sound Sears will be one to close down ... *sad*.

I had a quick 15 minutes before I had to head back home, so I took advantage by dropping in for a quick visit with my friend, Sharon.

I found Sharon doing what she does best ... sewing, or knitting when she is not sewing.  Sharon has been sewing for her daughter's little business, Katie's Kicks.  You may find out more about Katie's Kicks on her Facebook page by going HERE.  Custom orders made with LOVE by Daughter & Mother, inspired by Katie, Daughter and Granddaughter. 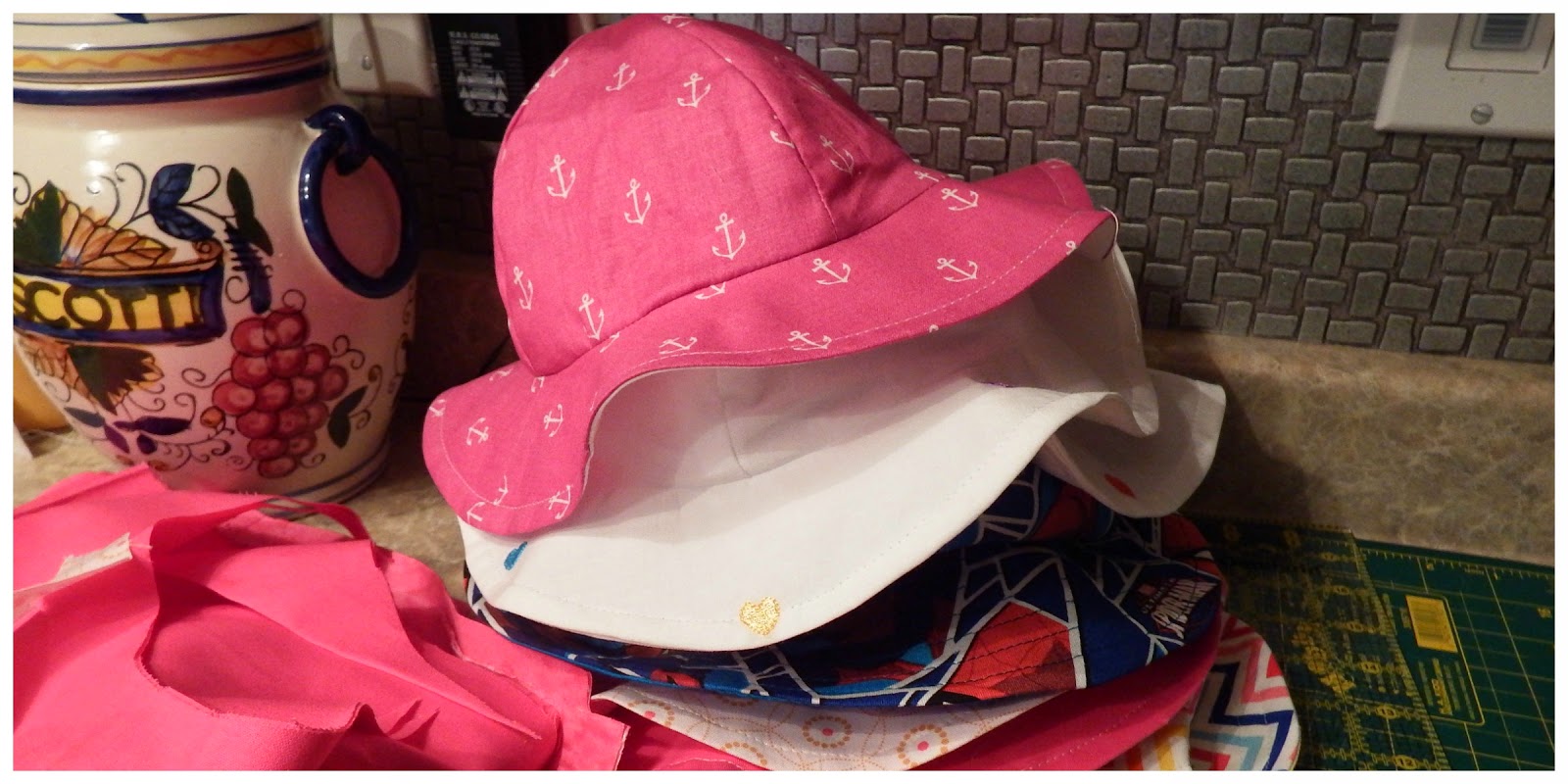 I also got to see Sharon's 2 Himalayan Kitties, Tigger in the top three photos and Bounce in the bottom photo.  Tigger had "starred" in a McDonald's Fillet of Fish Commercial, and Bounce so much a Celebrity, but just as darn cute.  I really like Bounce. 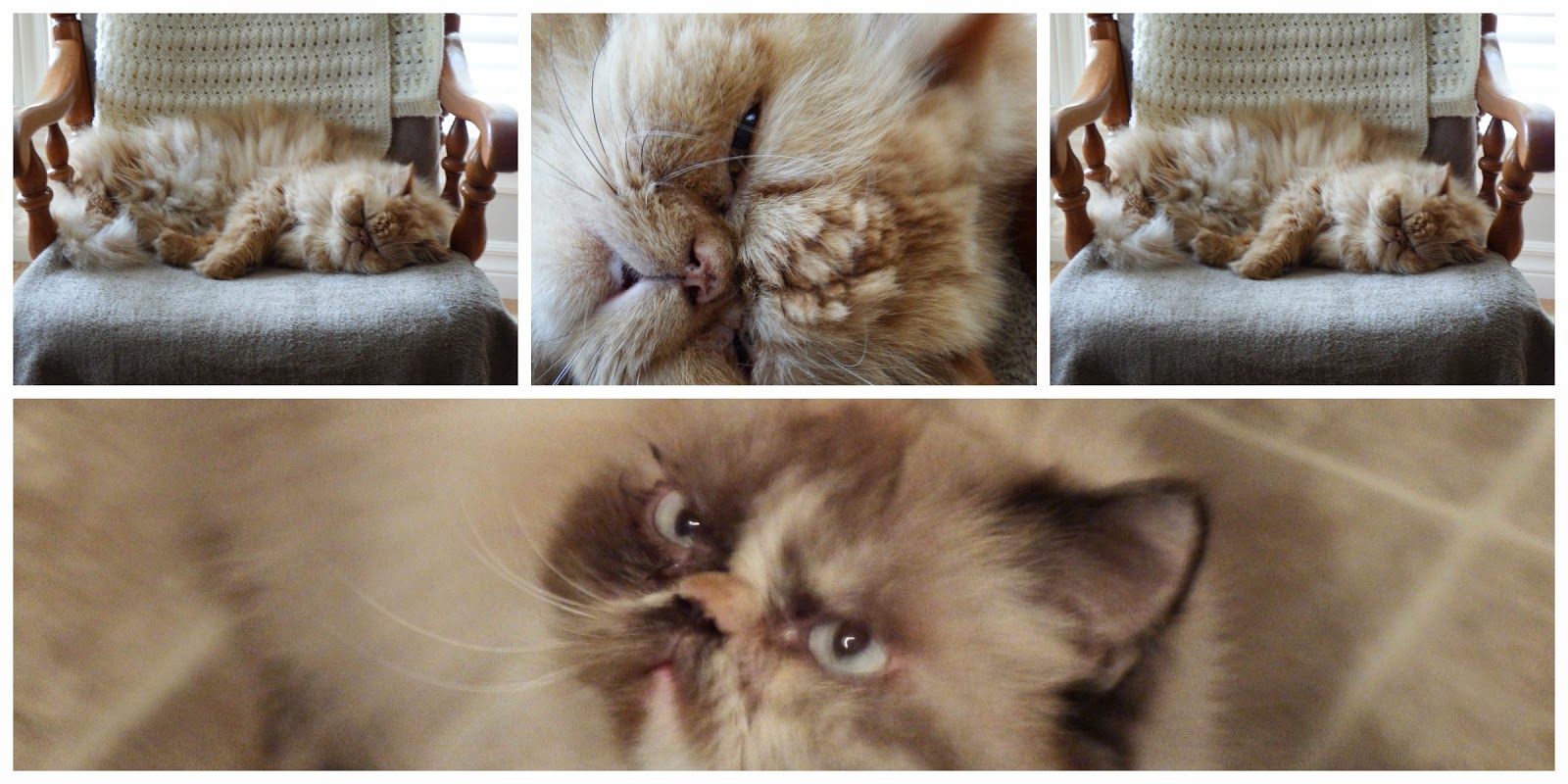 Back in Wiarton I had to stop around to the Wiarton Farmer's Market, as I was hand delivering an invoice to the Market Manage today, Abby Miners, who also just happens to be my friend too *smile*.


Abby & I both had ourselves a great "chuckle" when this customer came across our path. 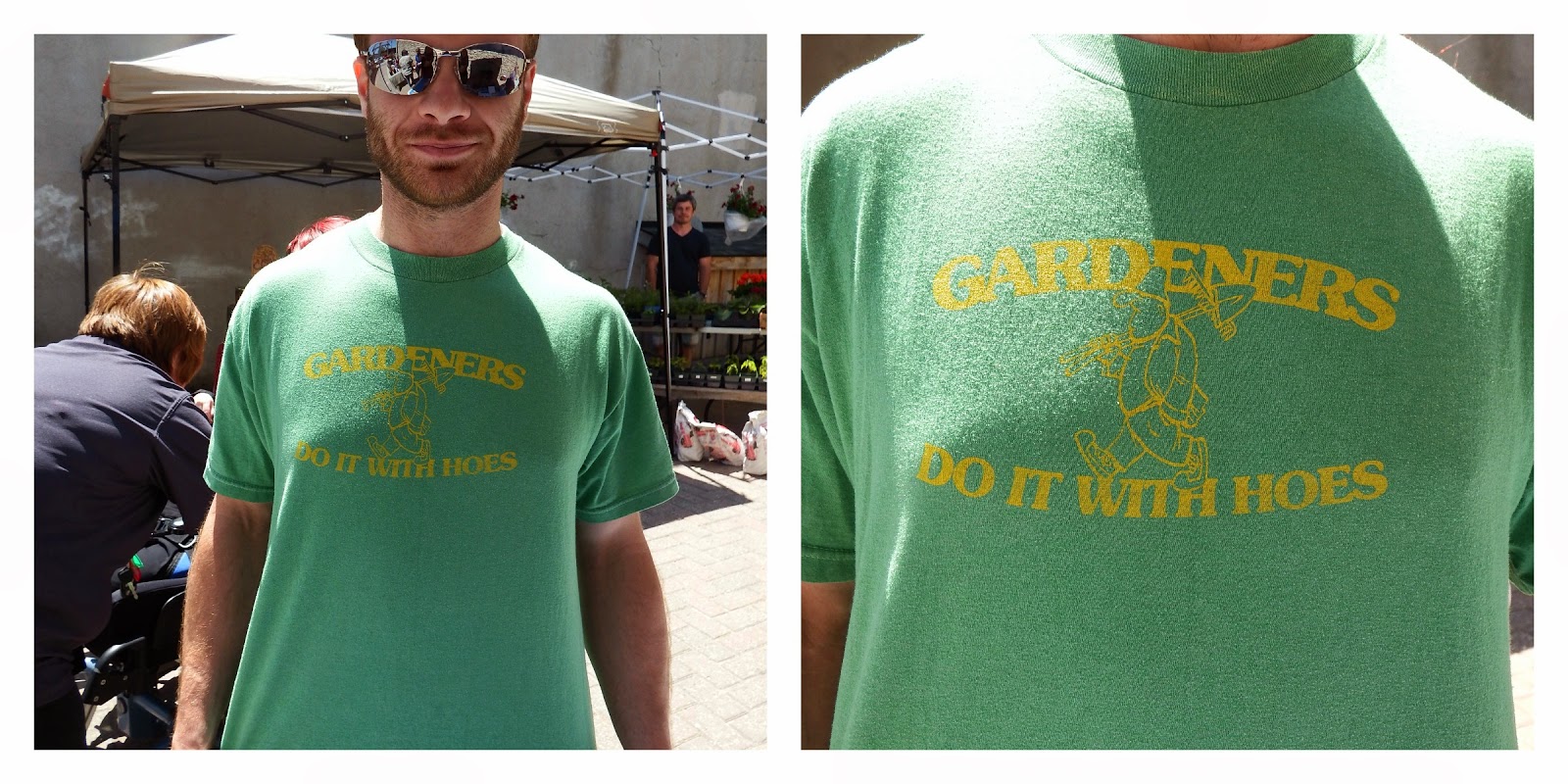 I treated Rob and I to one of Kelsey's Savoury Corn Chowder Homemade Pies for lunch when I did arrive home after 1 pm this afternoon.  All I had to do was pop it in a preheated 350*f oven for 30 minutes. 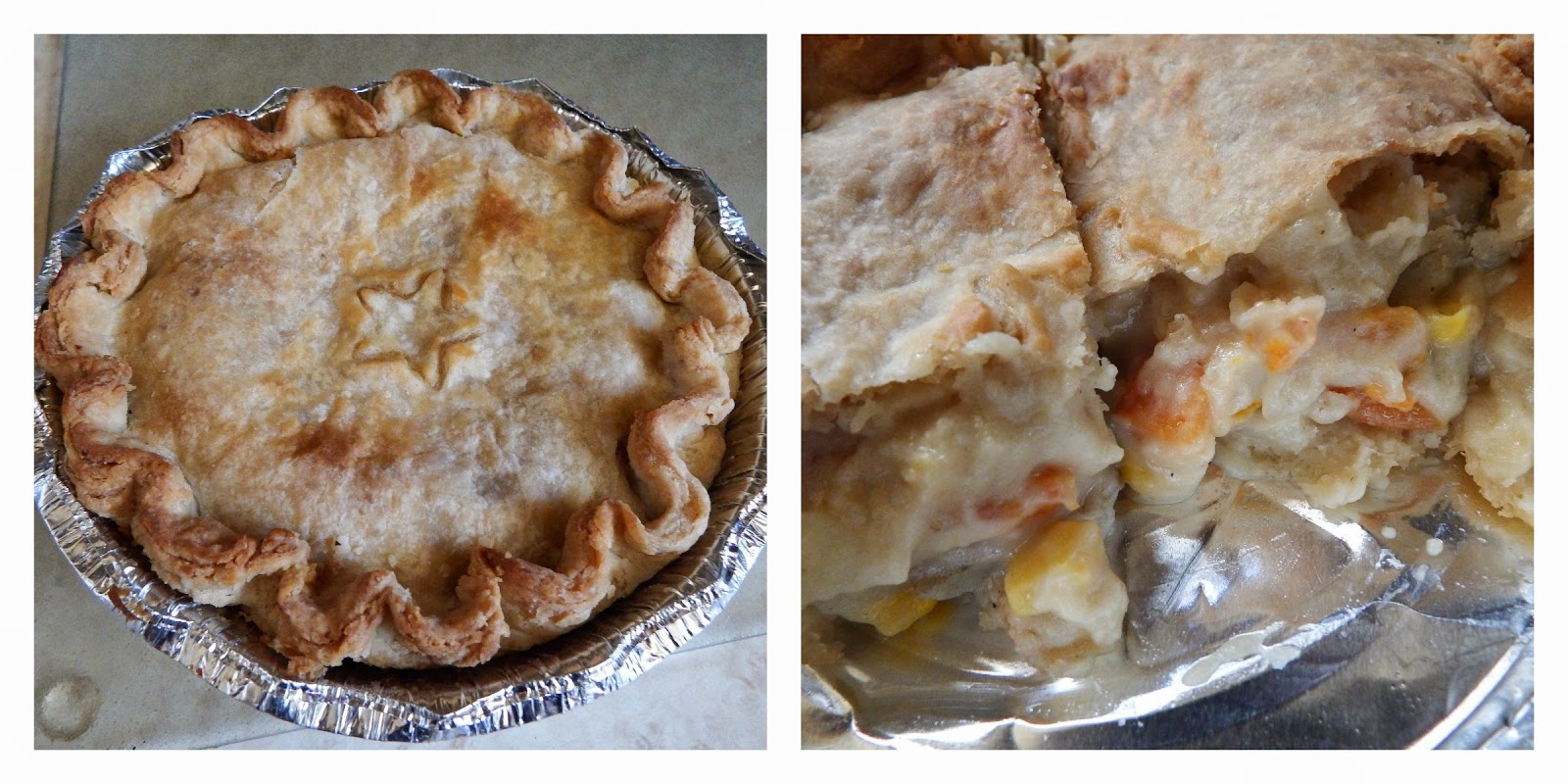 After lunch I settled down to calling Sears to order the Gazebo I fell in love with in the Catalogue.  Man on man frustration set in AGAIN, as there were none in stock.  On I went to check out Gazebos online at Costco.  Same story there.  Of course there were ones available in the $1200.00 dollar range, way out of my budget.

What did I end up doing? I called Canadian Tire back asking how many of their "on sale" Gazebos did they have in stock.  I was told only TWO.  I asked if they would hold one for me along with the mosquito netting and the panels.  I got Rob on board and off we headed to Owen Sound.

Oh yes I did stop to smell the roses for a wee bit today, as in Rose Breasted Grosbeak ...


I was thrilled when this guy came to our feeder today.  The photos were not as clear as I would like but still I was thrilled he was here today, and hopefully back again. 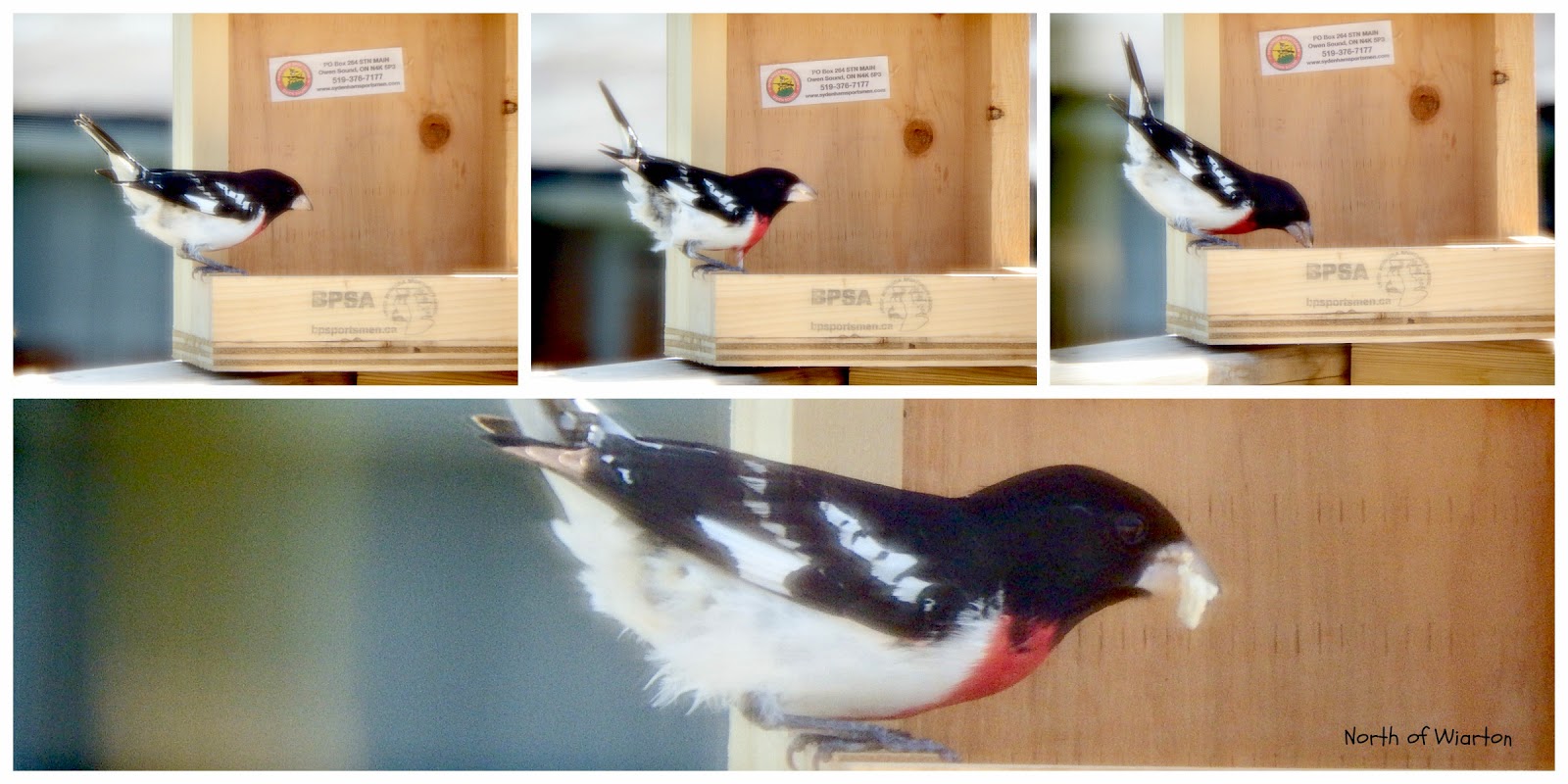 Rob and I made it to Canadian Tire, stopped into the Dollar Store, and into the Home Depot Store so Rob could google the John Deere Lawn Tractors.  I also bought some very black Calla Lilies and a Patio tomato.


Since the puppies are going to their Forever Homes next week I had picked up everything needed for their Puppy Gift Bags.  I just finished putting them all together at 7 pm.  The Gazebo? safe and sound in our basement waiting for our deck to be power washed and stained before it gets put up ... hopefully that will be done this weekend. 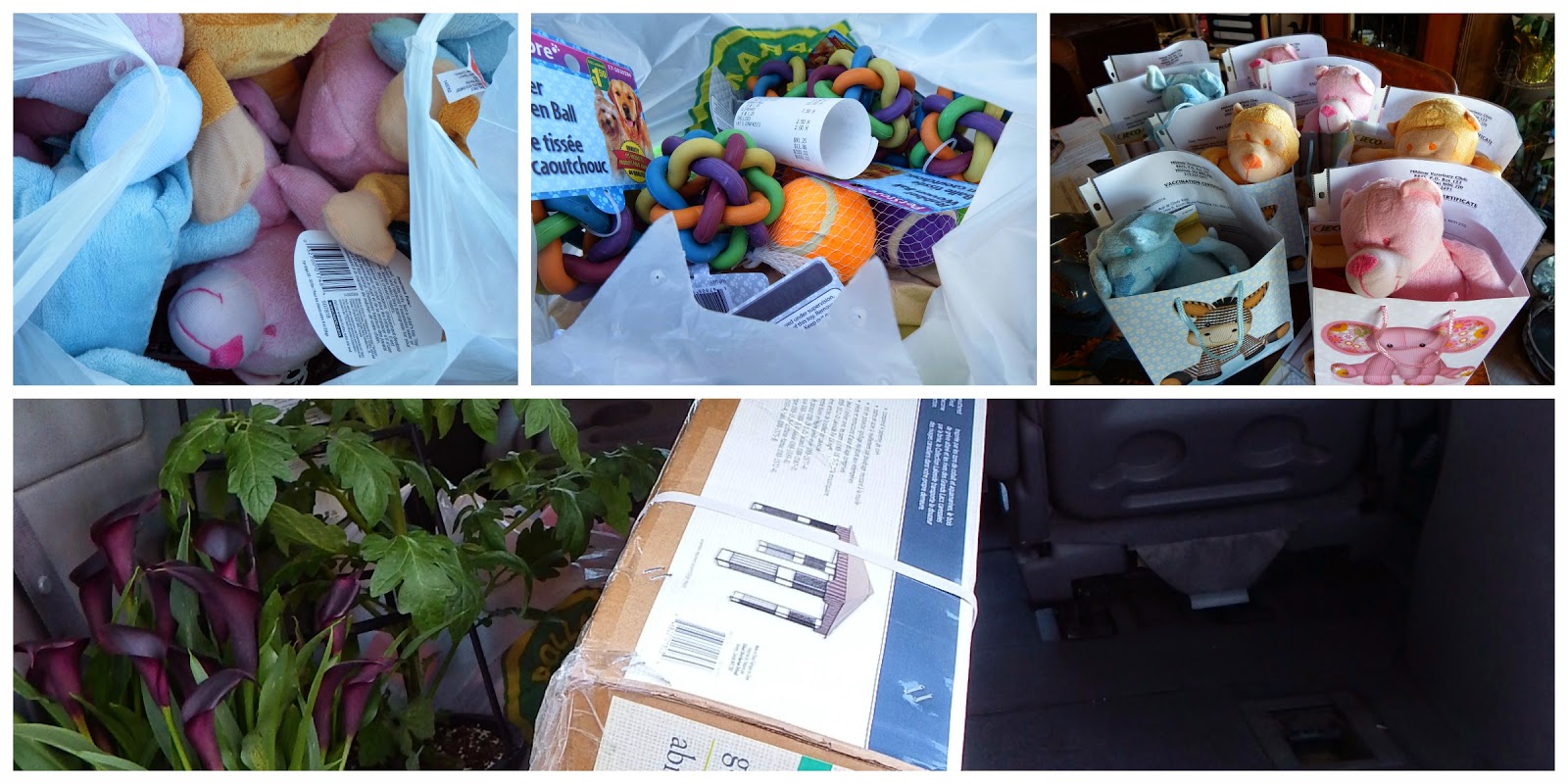 All the puppies have been put to bed for the night, as well as 4 adult Aussies.  I still need a shower before I even think about hitting the sack.  What a day !  I suspect I will be sleeping very well this evening, Just North of Wiarton & South of the Checkerboard.
Posted by Cindy@NorthofWiarton at 5/30/2014 09:40:00 pm