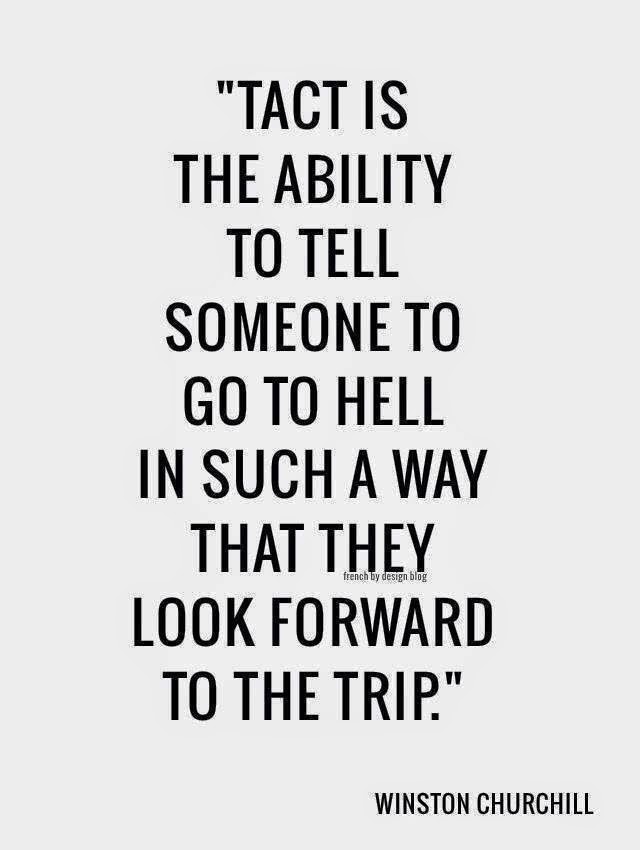 My dear friend, Renee had this on her Facebook page at some point today & did I have myself a laugh.  I sure wish I could come across that subtle to do this at times, however really do not think my heart would live with telling someone this.  I would probably stew on the fact that I told someone to do this in the first place, if I ever did.  I do understand being upset, angry and frustrated with some people, however I still believe that talking things out and learning to agree to disagree sometimes is the higher road to take.

Unfortunately not everyone sees things as I do, and besides nobody is going to agree 100% of the time even with ones own reasoning are they?  *smile*

First thing this morning I headed on downtown Wiarton to the Bluewater Park as there was a mini meeting concerning Canada Day plans being put on by the Wiarton Optimist Club, in coordination with the WDCC.  It was a slow drive into town as the fog had been very thick, but lifted and got quite humid by the time our meeting was almost to an end.  Couldn't believe how quick the temperature changed from cool to humid in an instant.

The Daffodils have been open since last week, as well as the Hyacinths.  The Tulip, being the only one I have, is late along with the Primrose. 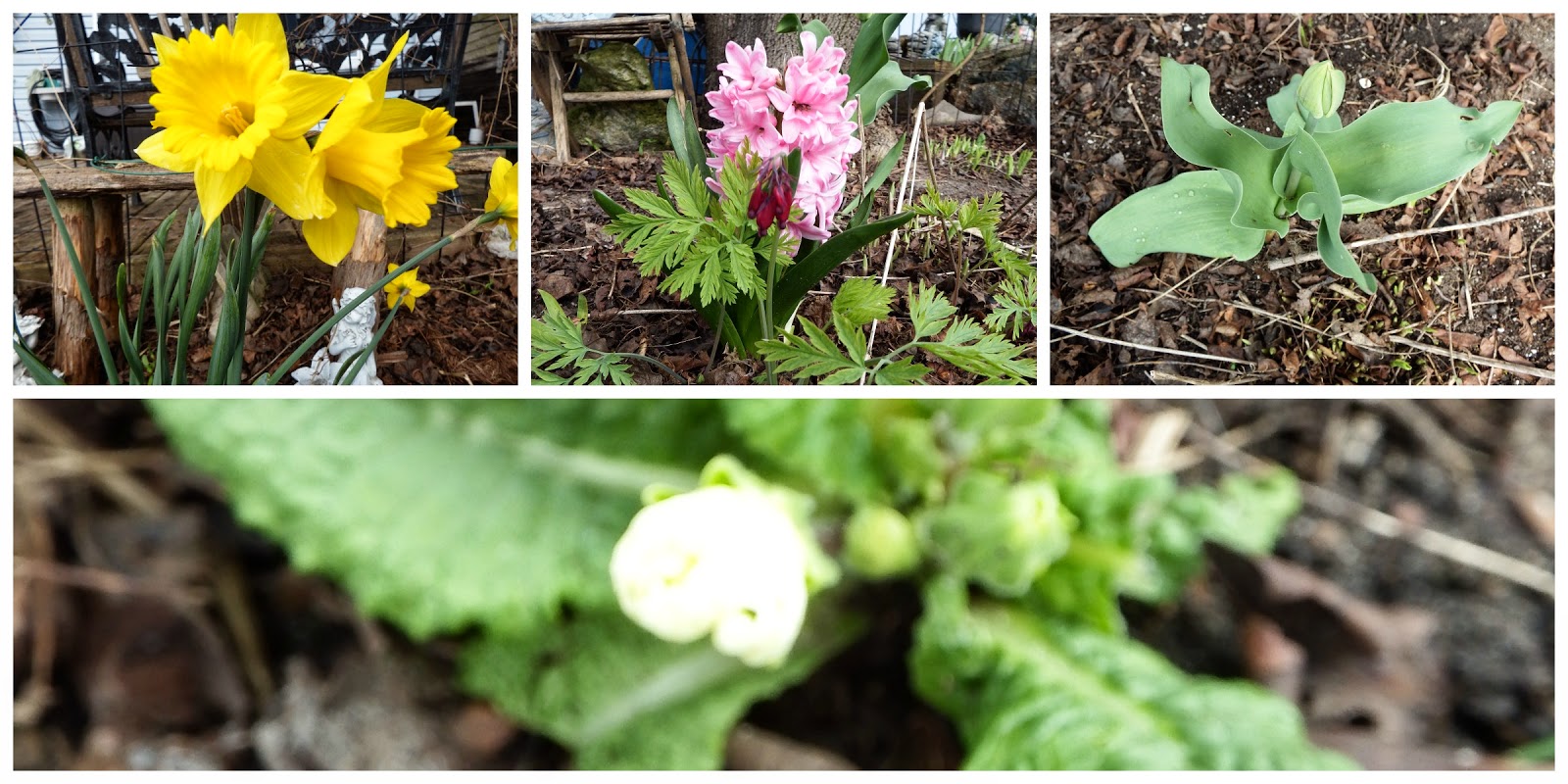 I have no idea why, but once I have left the house I somehow do not seem to want to come back home to get started on anything.  I am NOT leaving the house tomorrow morning, if I can help it as I NEED to get stuff done around here .... soooo much stuff that it is overwhelming.

Feeding and cleaning up after puppies now also can put a dent into a day, and of course I have to take the time to cuddle each and everyone one of them at least two times.

Regardless of how overwhelmed with what needs doing and how many times I can be taken from duties at hand on any given day, I have decided I need to do something for myself, and that is to take up my walking routine I left off after surgery twice within months of each other on my right knee two years ago.  I have put on a good 10 pounds since I quit walking, and I aim to get it off somehow or another.  Pray for me please, as I need it (*smile*).

I called a friend who had not been around today, then called my neighbour, hoping two days in a row of me would not be too much for her.  No it wasn't as Pari readily agreed to go for a walk with me.  I decided we would drive down to the Government Dock at Colpoy's Bay and go from there.

We headed up the Mallory Beach Road at a good pace.  Lots to see up on the bluffs.  Not certain if I would have cared to reside in one of the caves up there this past Winter.   Bandit was in his glory going along with us, next time we will give Buddy or Mercedes a turn, and  then Lexus when the pups are fully weaned. 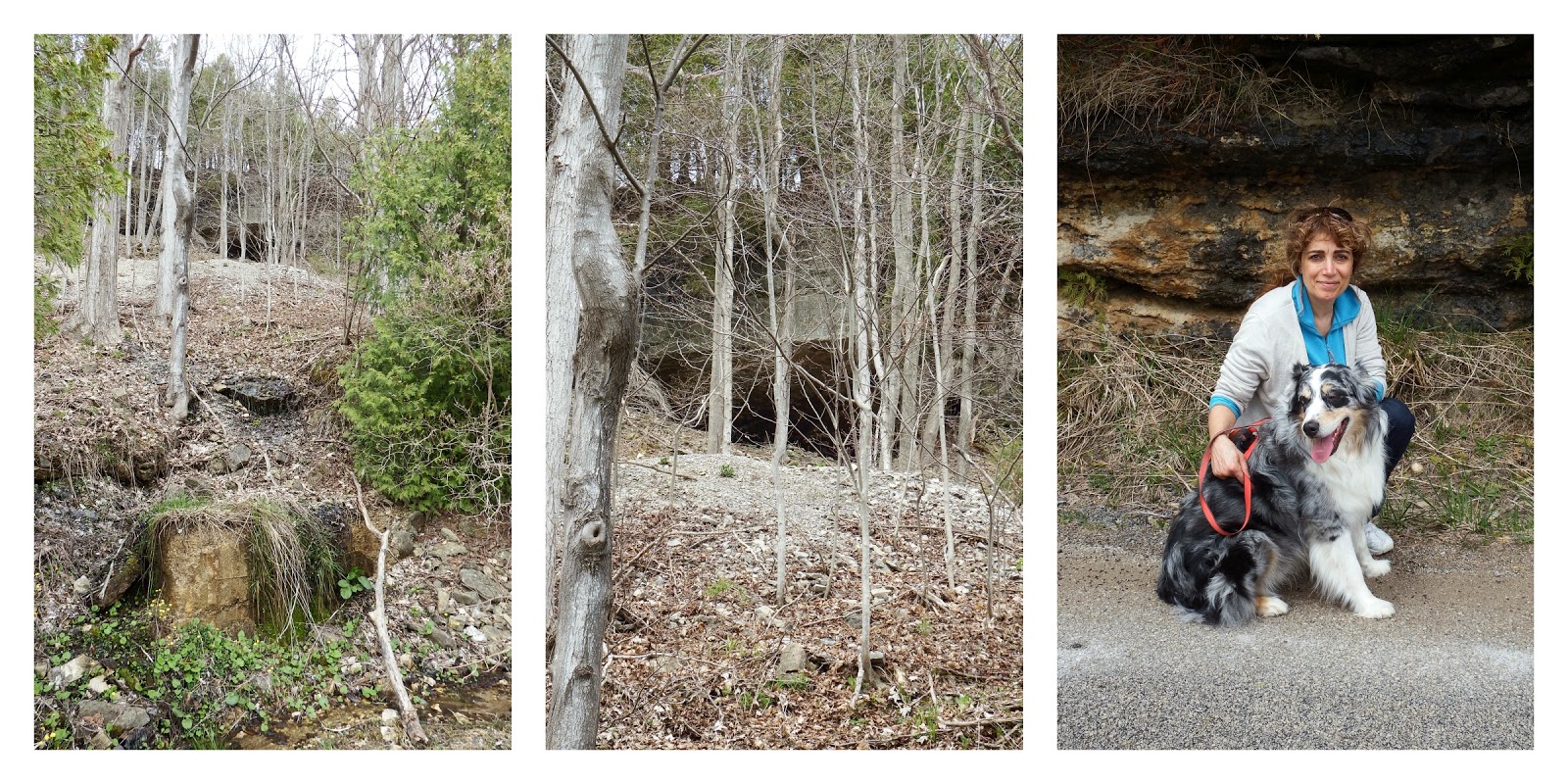 Way into our walk it had gotten quite humid, so we stopped down along the shoreline of Colpoy's Bay for Bandit to have a cool down.  He LOVED it, needing no encouragement to take a dip. 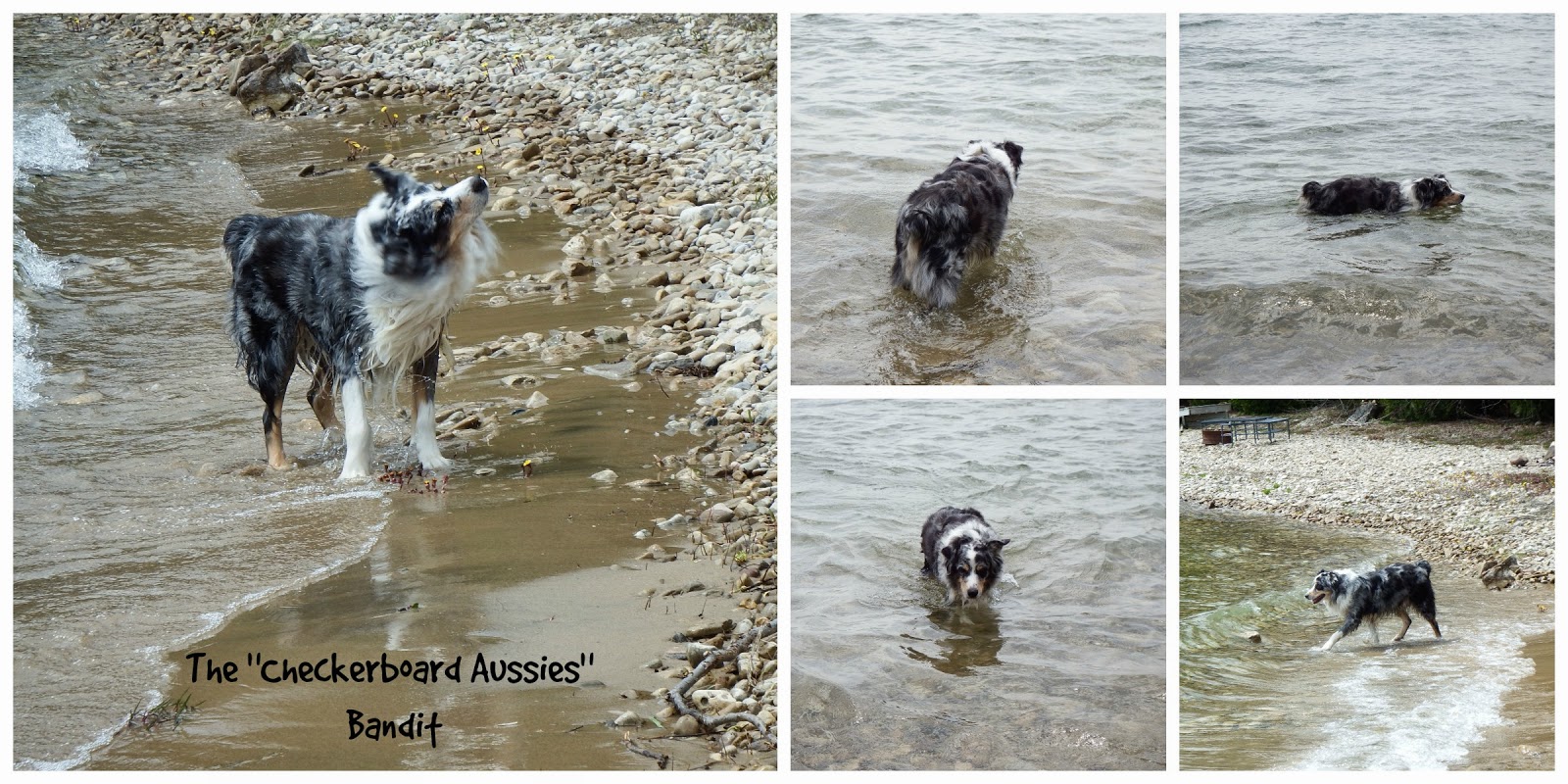 Beautiful is this Loon not? 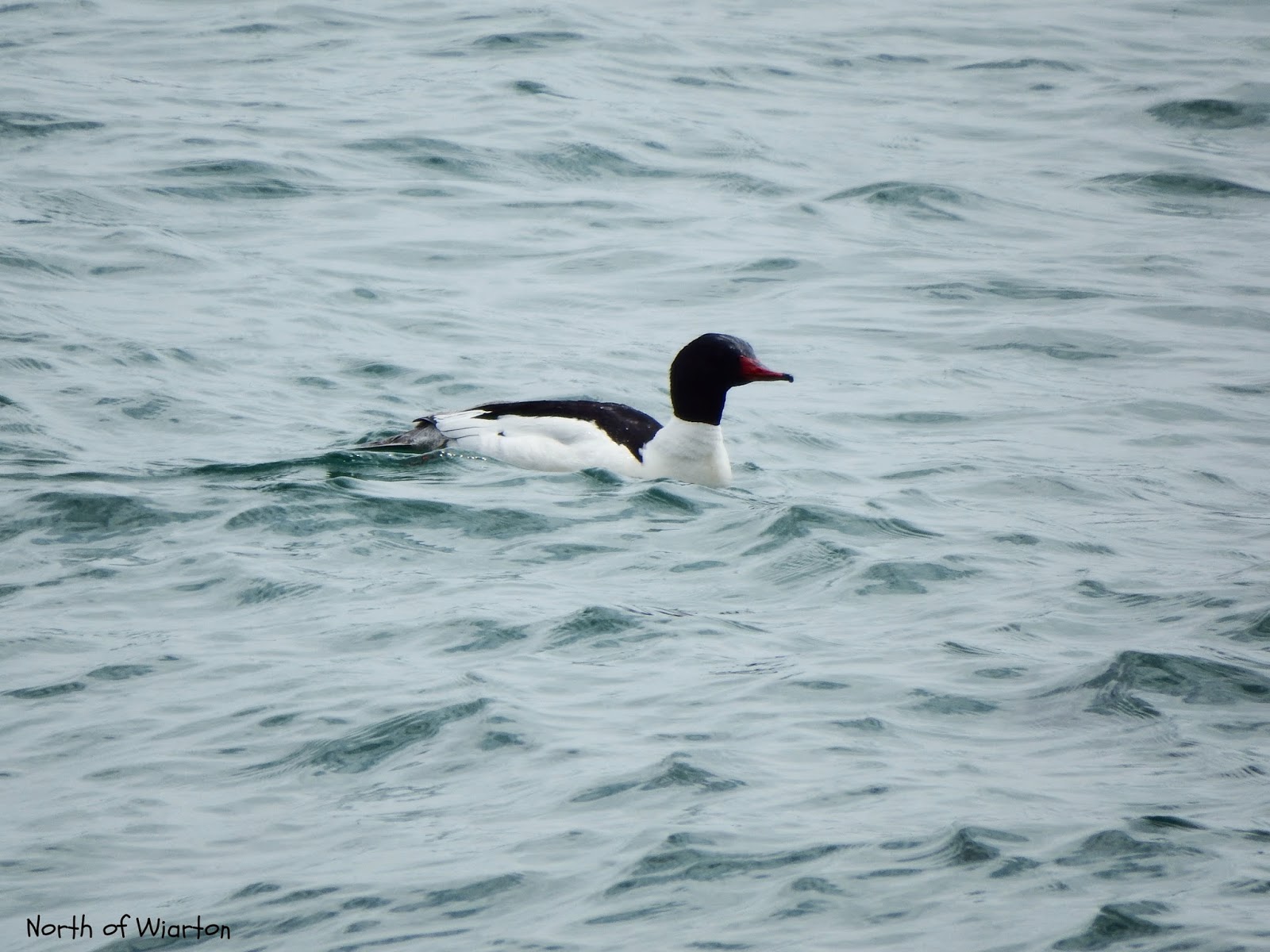 We walked over 10 km today !!! thinking that was a good walk under my belt, it being the third walk since Saturday.  A friend is giving me a pedometer in a couple of weeks, so I will be able to measure my steps.  Mine broke almost at the same time I had stopped walking so long ago ....

When I got back home I got all the Aussies out and back in before the Thunder and rain began.  Just after our Dinner of Scrambled Eggs, Bacon and Toast, the rain came down in torrents for the second time.

Oh I almost forgot ... last night before it was time to take out everyone for their last outing of the evening we looked out in our field to see a huge Red Tail Hawk among a pile of white feathers.  I startled him once I went out onto the deck to get a photo, however did capture him when he flew to a nearby fence post.


He was the biggest one I have ever came across, and he still had the Seagull in his clutches. 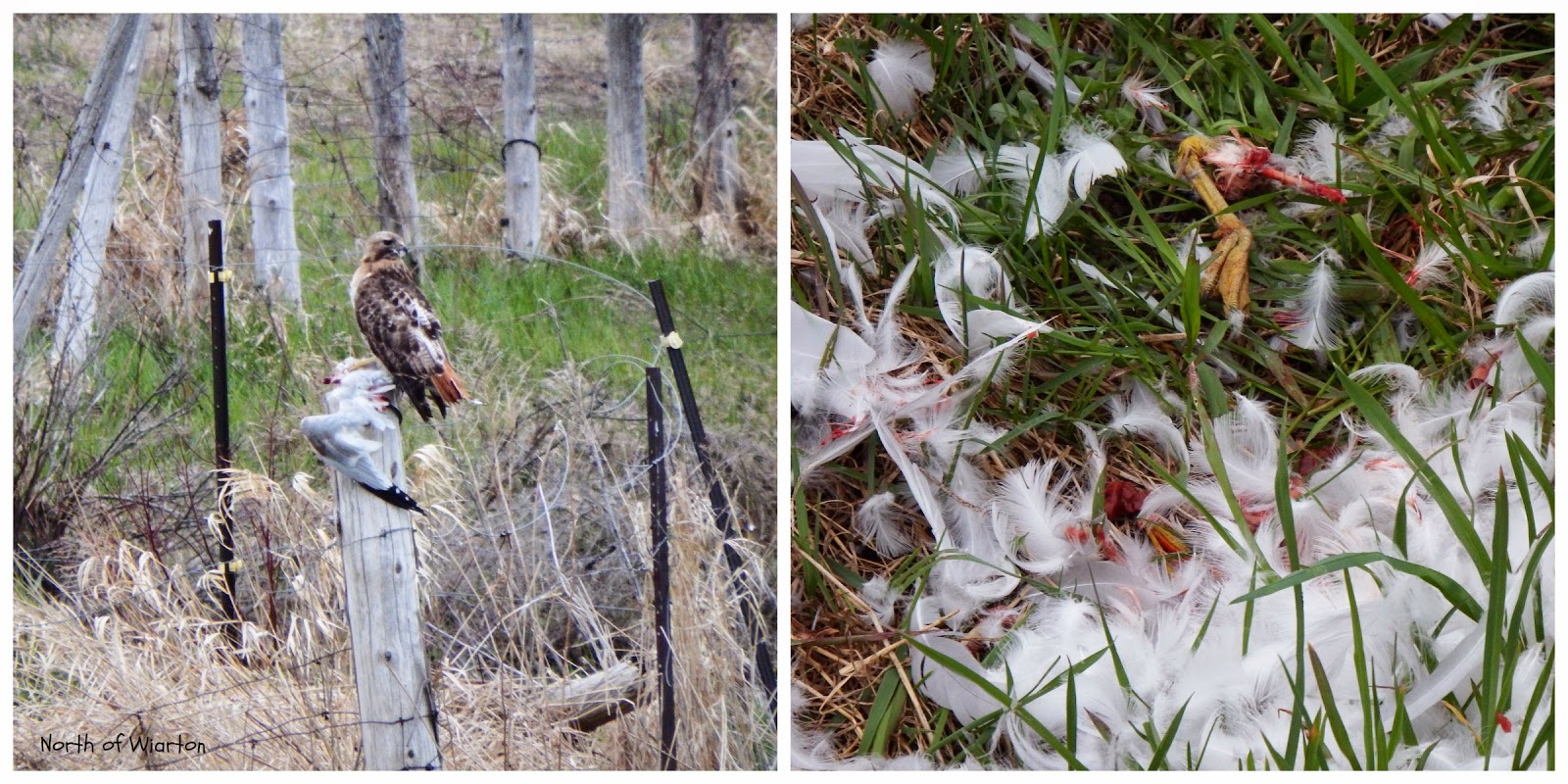 I do not have the greatest "state of the art" camera to capture my subjects, however there are times I am very pleased with what I am able to capture from time to time.