Is It Almost Over ?

I give up !  I have been sitting here for the past 20 minutes trying to upload photos to my photo editor and nothing is happening.  I am too tired, too frustrated and way too stressed to wait one moment longer.

My usual early morning wake up was later this morning, 5 am.  Nice to sleep in for a change.  Rob was out the door at 6:30 am.  He is still in much pain, however the medications have helped his knotted muscle start to relax somewhat.

I was out the door before 8:30 heading off to Owen Sound.  What time did I get home from Owen Sound?  Lunch time.  Within 10 minutes of being home, barely having time to take out all the Aussies and have a washroom break myself, the girl who was coming to see one of the puppies was pulling in the driveway.

How long did the puppy appointment go?  at least an hour before she was heading back out our driveway after committing to the smallest of the two Red Tri females.

Not long after I was heading back out downtown as I had forgot to pickup milk, and trust me creamer just not taste the same in a cuppa tea.  While downtown I also stopped to pick out a Mother's day card for my Mother.  Mother's Day is this upcoming Sunday, the 11th of May.  I also stopped to take a couple of photos of a restaurant who just got a new "face lift".

I finally got home to first make a couple of business calls before actually sitting to have a cuppa tea.

Rob came home, and of course it was time to go back out with the Aussies.  I had also noticed a different vehicle in the driveway realizing Rob had taken our car out of storage.  I think we might have got to drive it three times after purchasing it last year, to town and back... maybe???

Back in the house again I had been sitting maybe 15 minutes when I received a text from one of the new puppy owners reminding me they were coming to visit their new puppy.  Five people and an hour later, with another puppy call in between, I finally came back in the house to start our dinner of White Fish, Brown Rice and veggie.

Dinner was over with by 6:30 pm..  We had someone come to the door right after Dinner, which was better then during Dinner.  I do not know about anyone else, but I really hate when someone walks into our house without waiting for us to go down and answer the door !  Truly I find it as an invasion of privacy, especially with having our own business, I feel we have that right to have privacy behind our own closed doors.  I would never think of walking into someones home !!!  I even knock at my Son's home when I arrive.

When one is tired, in pain and stressed some circumstances seem to magnify themselves, do they not? but still I need my PRIVACY !  besides what if we had been in the shower, or .... whatever ????

Photos?  yes I put one together this morning.  Both privacy and peacefulness I had first thing this morning walking across our field with Buddy.  Canada Geese and Mallard Ducks were in the field beyond, Red-Winged Blackbirds were calling out, and then I spotted ....


Are they not beautiful.  I could not be more pleased they are on our Property.  First time I have sighted them in the 11 years we have lived here.  Cranes are pretty awesome looking birds. 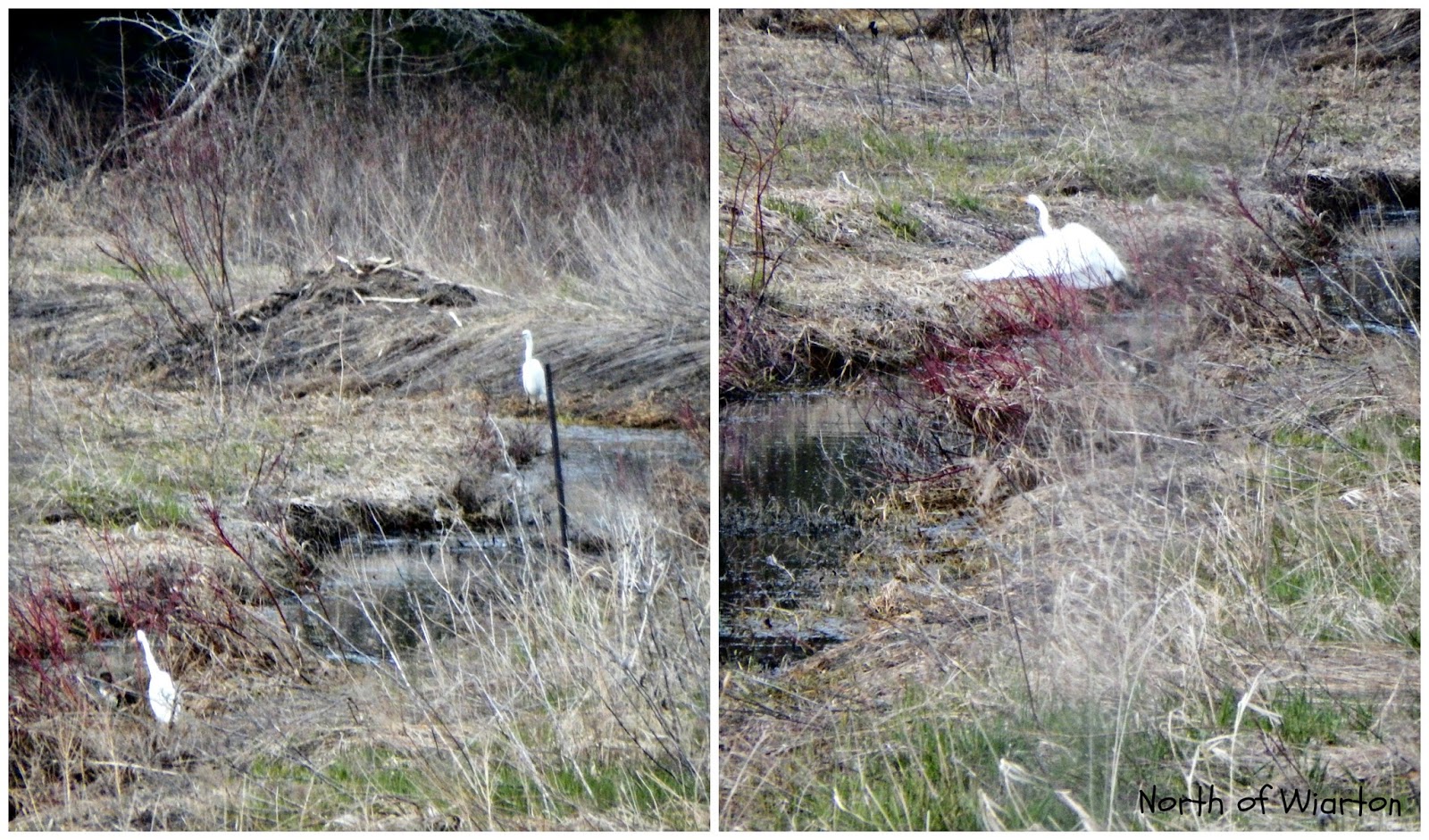 I am truly blessed to have this bit of Peace in my Life in our very own backyard.

Hopefully tomorrow there will be some more awesome Crane photos, and puppy photos ! if the dang, dang, triple dang photo editor works for me !!!  Geesh ....

Is it almost over this day!!!

On that note, know I am also blessed to have a roof over my head and food in my pantry, much much more, and a bed that is going to see me very shortly, Just North of Wiarton & South of the Checkerboard.
Posted by Cindy@NorthofWiarton at 5/07/2014 08:35:00 pm