I am feeling so terribly angry and hurt right now I do not even feel much like posting today.

Ever since my youngest Son and his partner, parents to our 2 grandboys, Aiden 9 & Conner 6, parted ways a Year ago October 2013, I feel I have been penalized.  Rob and I went from having Aiden for a week at Christmas, March Break, and usually 2 weeks in the Summer, then most recently including Conner (he didn't want to come until he got a bit older), to barely one week a Year.

Now I just find out the one week I have requested out of the whole Year just is not suitable to Her who controls all.  Apparently her Mother has first dibs on what week she wants them this Summer, a Grandmother who sees them on a weekly basis as they live in the same City !!!  Where is the justice in all this ...

It is worse.  I was told by her that if I wanted them I had to go through her.  Our Son told me I wasn't to talk to her and I was to go through him.  What the Hell !!! (pardon my French) what is terribly wrong with this picture ???  And if I say anything in rebellion to either one of them, I am the BAD person, except I can not say my son has any control in this matter as it is a constant battle for him as well as SHE has full control and uses it to her advantage never mind the boys best interests.

Honest to God if I had the money I would be able to afford to go to Court to exercise my Grandparent's rights, but I can not even afford to do that !  so where does that leave me? at their mercy.

The worse part is what we all know that once our children or grandchildren get to a certain age they want to hang out with their friends, not their parents, especially their grandparents.  I am feeling much hurtful anger over this, AGAIN, as I feel I am being robbed of my time with our grandchildren.

I sure wish I had a friend that was a very smart snazzy lawyer that could take care of this for me for a "song" that is what I wish for ... as the other things would not be legal now would they?  Geesh it makes me angrier then a "wet hen" sometimes and truly I have already cried a river or two about it.

If I get the boys at all this Summer it will be not when I want them for the week I can put them into the Day Camp Aiden so loves, and that ends with my Family Reunion so the boys can get to know our side of the family and all their cousins that are their ages, NO it will be some week where it there will be nothing going on rather then something I had planned will be in their best interests in mind.

But regardless if I am so fortunate to have them, I will enjoy every blessed moment I get to spend with them, this I know.  That is my rant for the day, not that I feel much better, but still it helps getting it off my chest somewhat, and knowing I am not the only grandparent who has had to suffer because of a child and their partner splitting up.

What really frosts my butts is remembering HER saying once, "if anything happens between your son and I, I would NEVER keep the boys from you".  HA what a pile of BS that was.  I suppose this might have been true if I would have taken her side completely and shunned my son forever, then there might have been some truth to her statement.  Apparently I wasn't completely done my rant yet.  There DONE !

Back to a couple more pleasant moments of my day despite the deary rain that is flooding out our property again.


I indulged the other day and bought myself a table runner.  I love Sunflowers and the colour blue.  The birdies I had also indulged in for myself last Fall seemed to be the perfect fit for the runner.  Little things sometimes brighten up an otherwise dreary day, do they not? 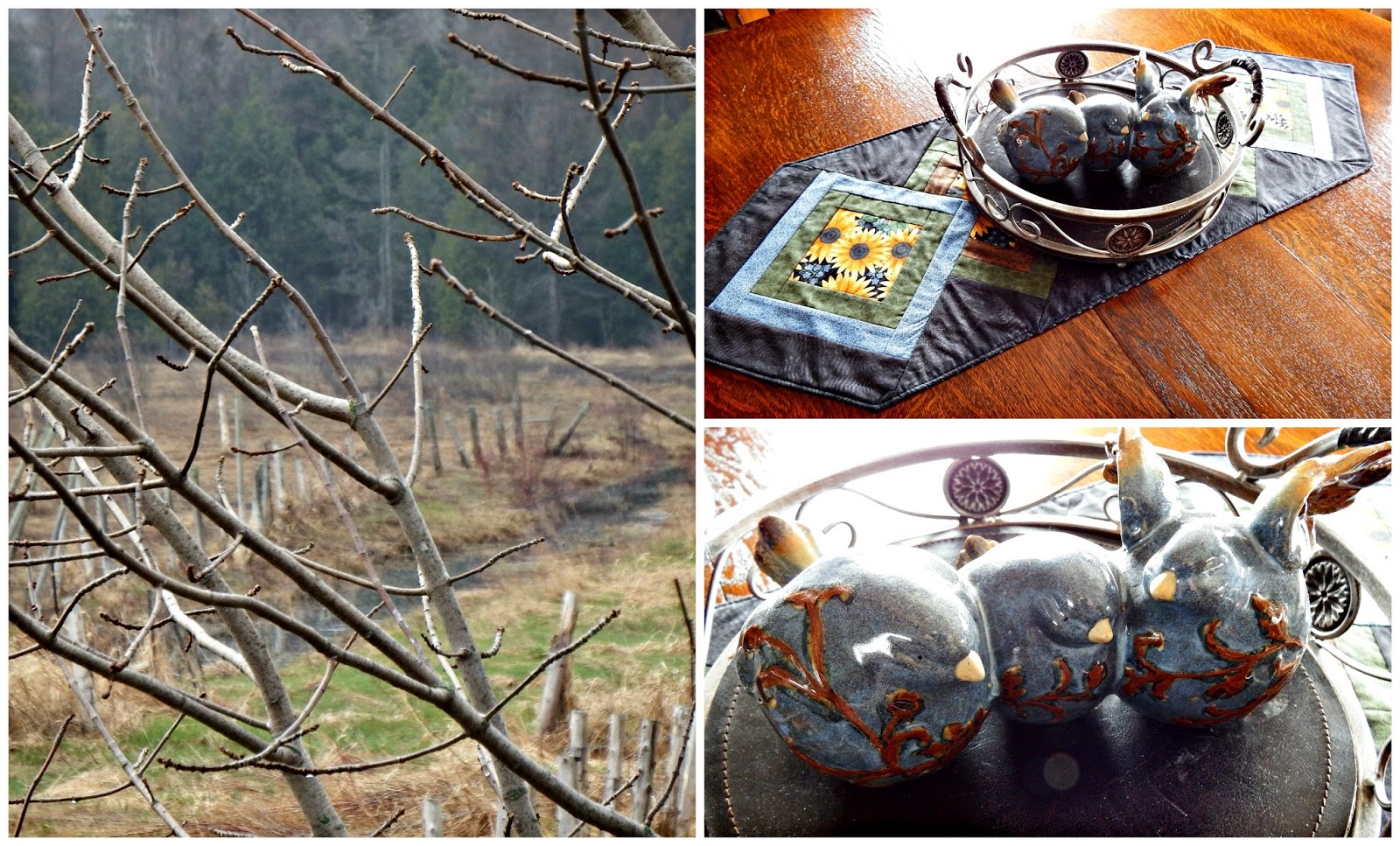 This morning after I had changed up the bedding, put in a load of wash, I headed out the door for some errands downtown Wiarton for myself and the WDCC.  I left home at 10 am to return 4 hours later.

Returning in the afternoon didn't mean I could shirk further duties of the day, as I had another load of laundry to do, vacuuming and then washing some floors.  The washed floors will probably not stay as so once Bandit has been out and in the next couple of times.  Regardless of wiping his feet with old towels the floors still suffer.  For the LOVE of our pets, and truly I could not imagine life without them, especially our Bandit.

Even though this afternoon was pouring down rain, Rob was kind enough to go out on the deck to BBQ us each a pork chop for our Dinner.


We had a poor man's dinner with each one chop, and as requested by Rob, Pork and Beans. 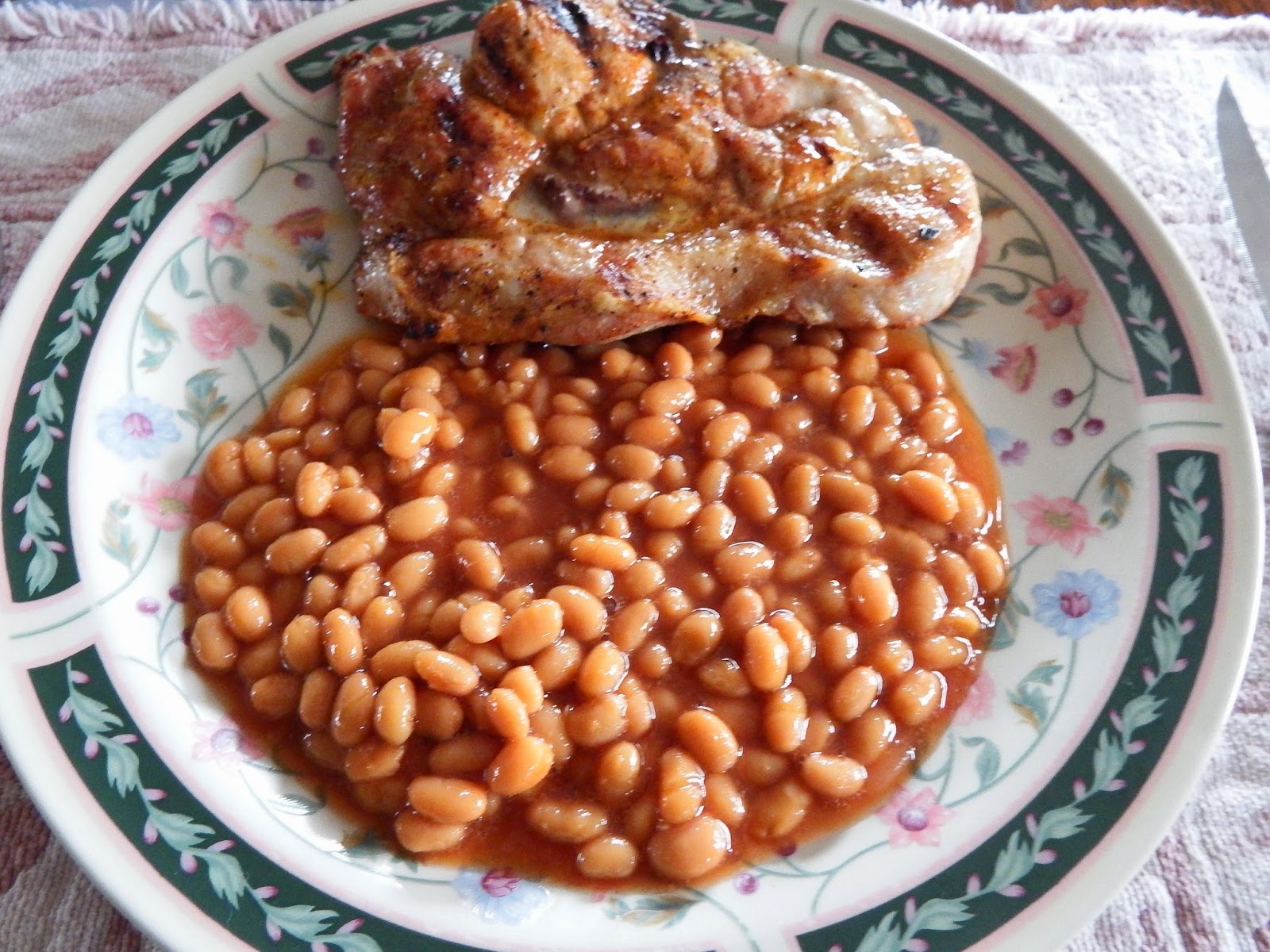 My dear Crabby Cabbie is gone to work, while I think I will try to knit a couple rows on a scarf I have been working on for at least 2 years or more, or try to read, or maybe watch a bit of TV as in the Food Network that I enjoy, or a re-run of the Vikings.  Things to do to take my mind off of other things.

Almost forgot again to post the photo of what I had been following up Frank Street in Wiarton yesterday...


.... thinking it was a good thing they had removed the wings before transporting??? 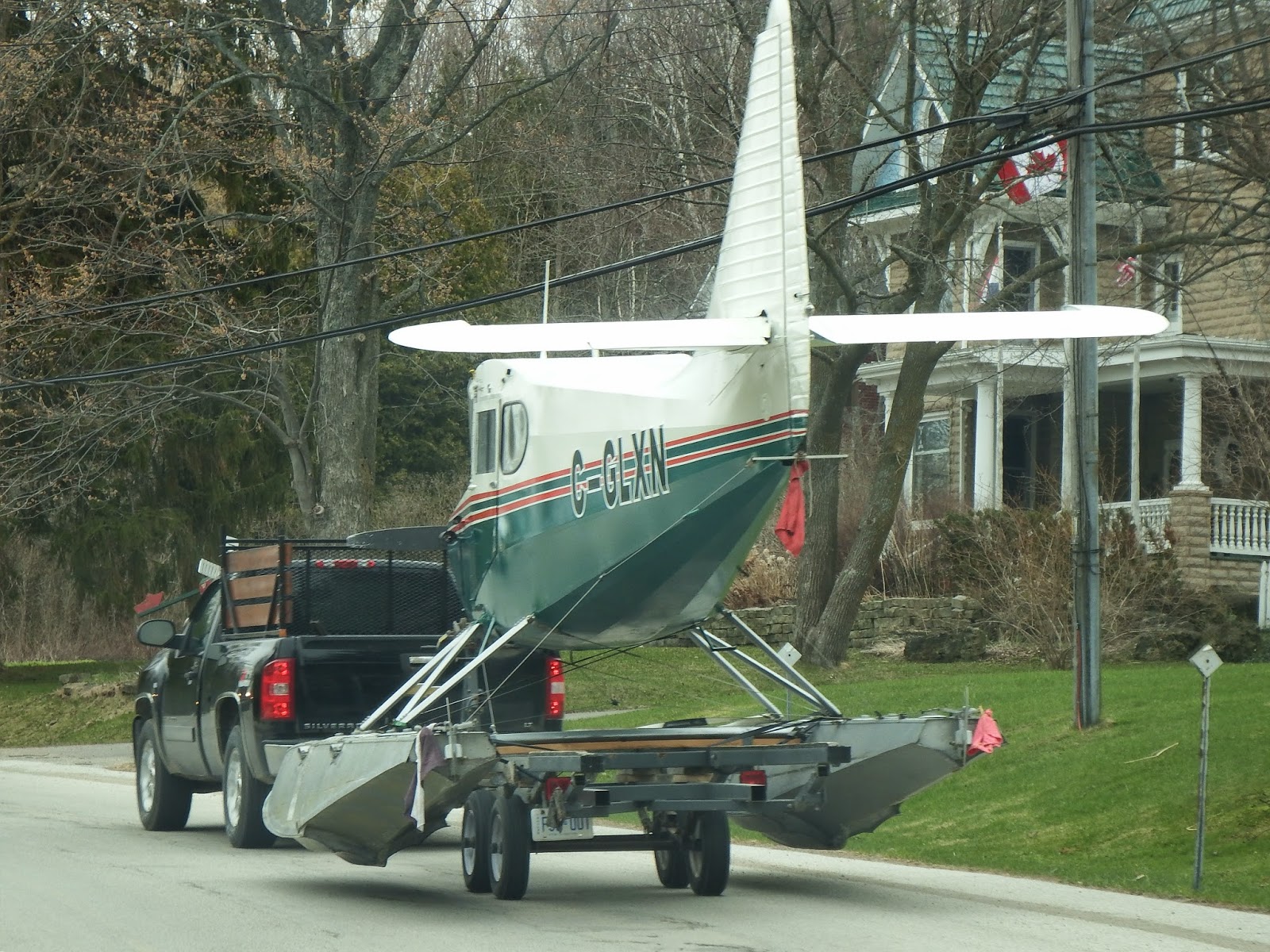