Before I had a hot shower and headed off to bed, I headed out the back 50 (not too far though) behind Rob who was checking the drainage ditches between our fields for Beavers.  Damn it had been really cold out there last night.  The wind had been brutal.

Rob had been smart enough to wear a scarf around his sore throat.  Other then part of a fence down, and a culvert a bit on the plugged side there had been no sign of Beavers on our property. 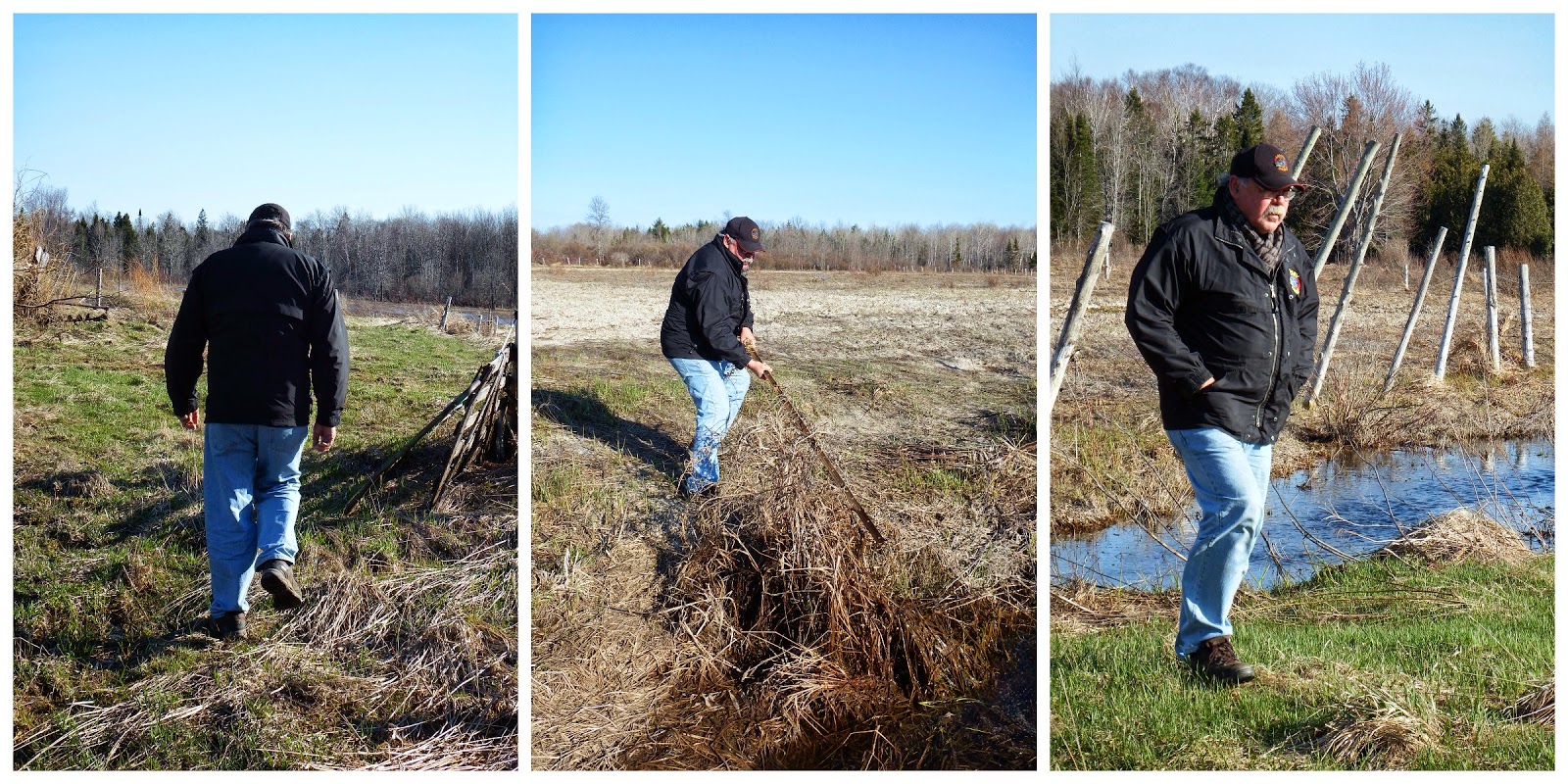 Rob checked to the South, the East and then up the West. The water was moving pretty good. 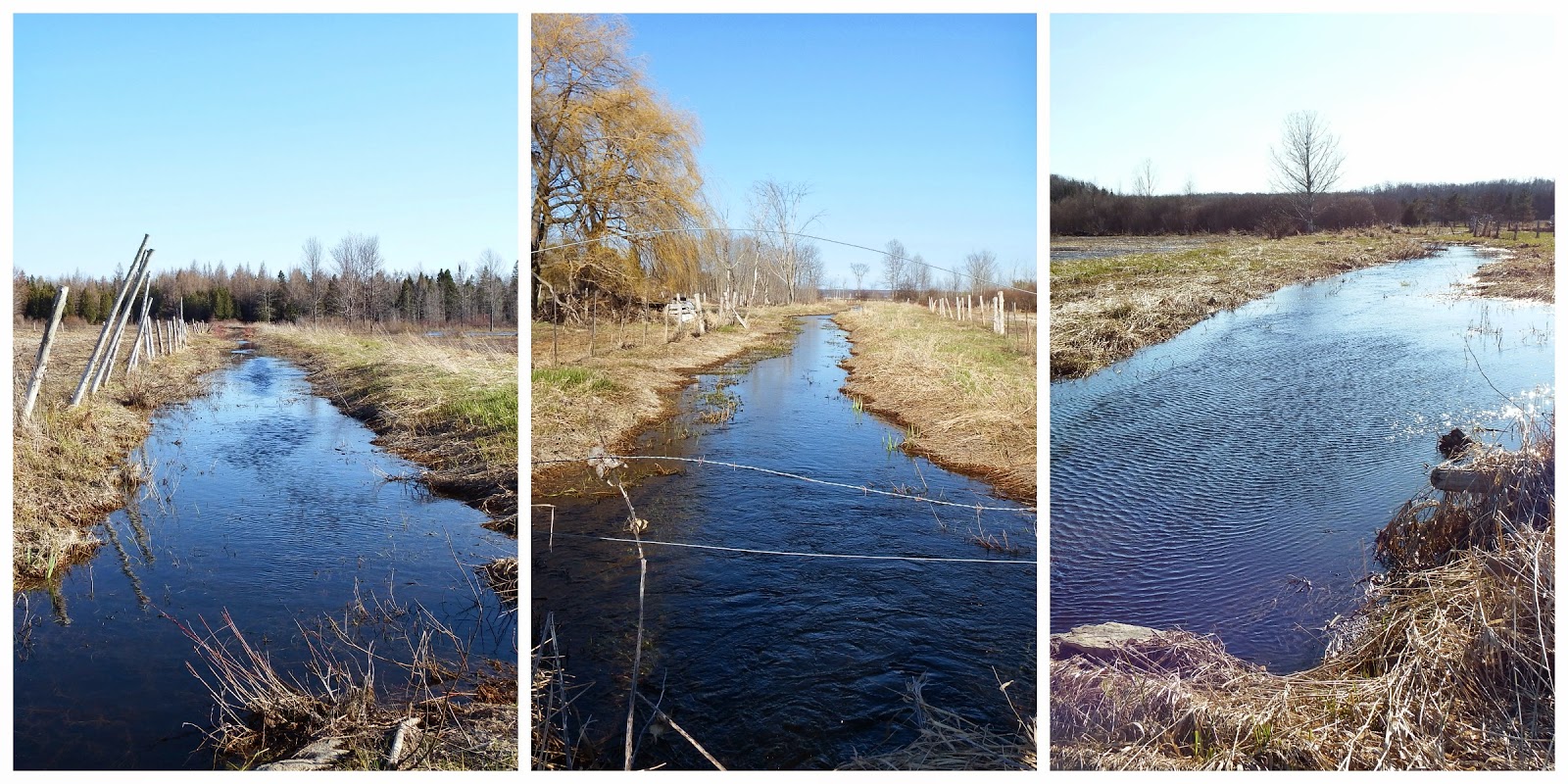 Last Summer when we had the Tornado like weather one of the Willow Trees had broke off.  Someone has been munching on the Willow by the looks of it.  The deer must come throughout the night as I haven't seen any in the day time. 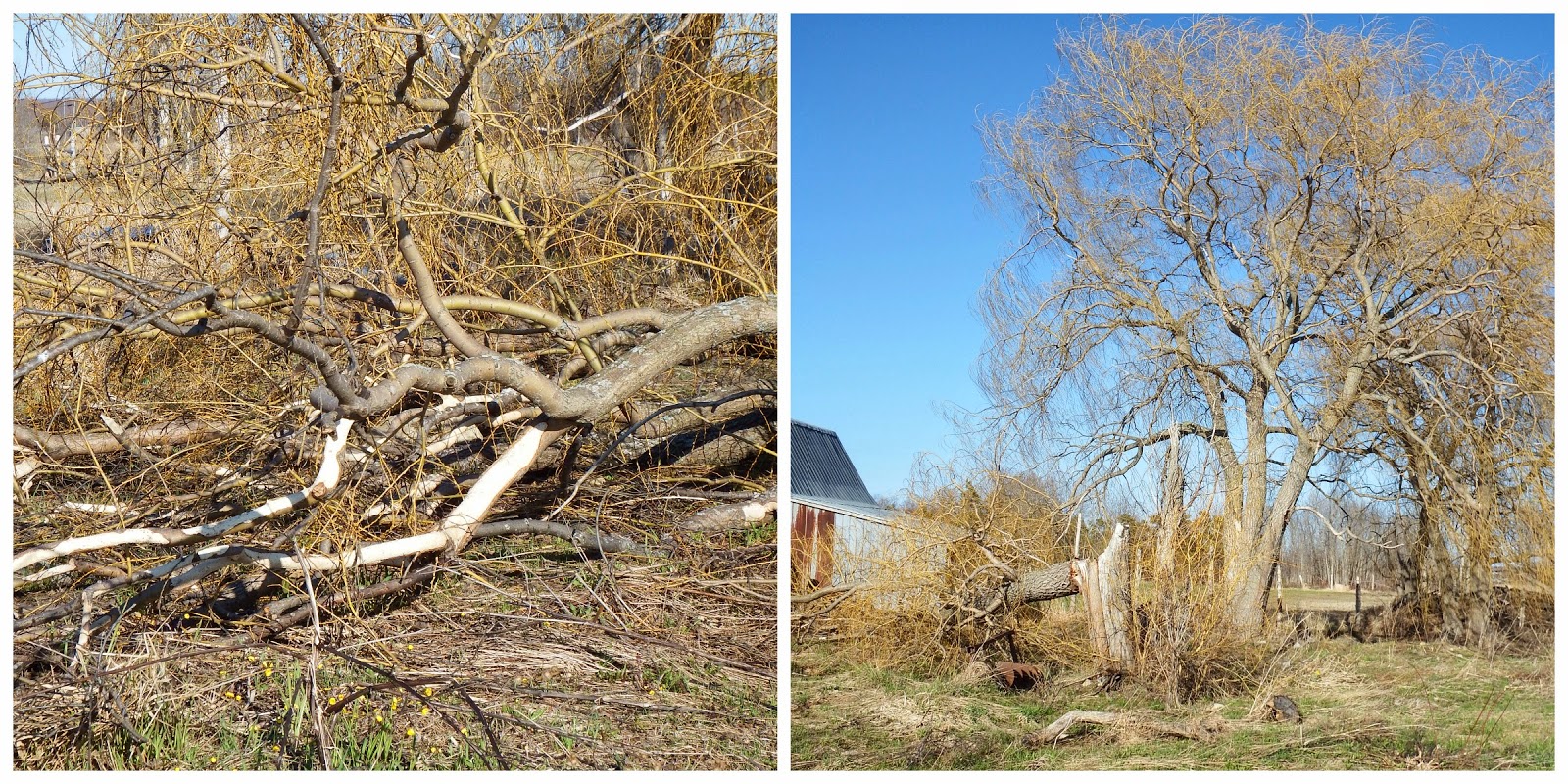 This morning I had been over to our neighbours, Solway's Farm Market.  When talking to Mike he was telling me a Beaver had started a dam at the mouth of their pond, and again down at the neighbours, where they had just pulled it out with a backhoe last week.  He took care of both spots.  It was agreed that between him and Rob they would have to keep a watch out and keep pulling the dams apart before they get out of hand again.  Any Beaver trappers out there?  really neat animals but can cause lots of havoc for property owners such as us.  Dang those Beavers !

I had not been to my niece's home forever !  today I collected my friend, Pari, and we headed on down to see Joanne at her home.

As I was heading out, Rob was looking after a branch from the Maple Tree that he must have had taken out with the tractor this past very very very long Winter.  Of course I managed to get a little "smirk" from him behind the branch.  Check out those cheeky cheeks. 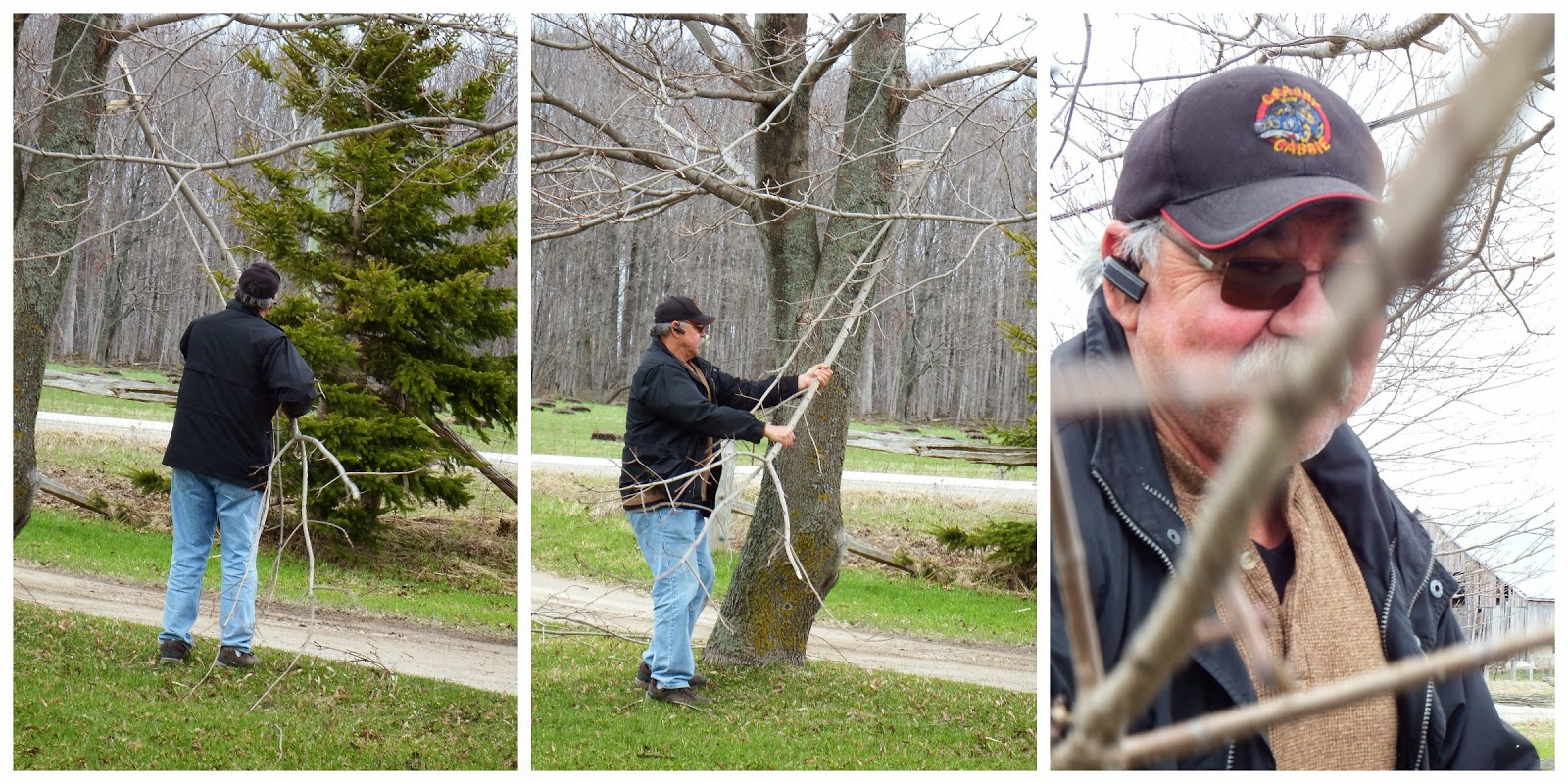 Pari and I had a bit of visit with Joanne at her house, checking out the back entrance room she had re-done herself.  Forgot to take my dang camera in with me, I am definitely slipping.

The three of us headed on downtown Tara to have a bit of lunch at the local restaurant there.

I  had a Toasted Clubhouse Sandwich, Joanne had the same with fries & slaw, and Pari had a Hot Dog.  It was a good lunch, and the walk had been enjoyable there and back. 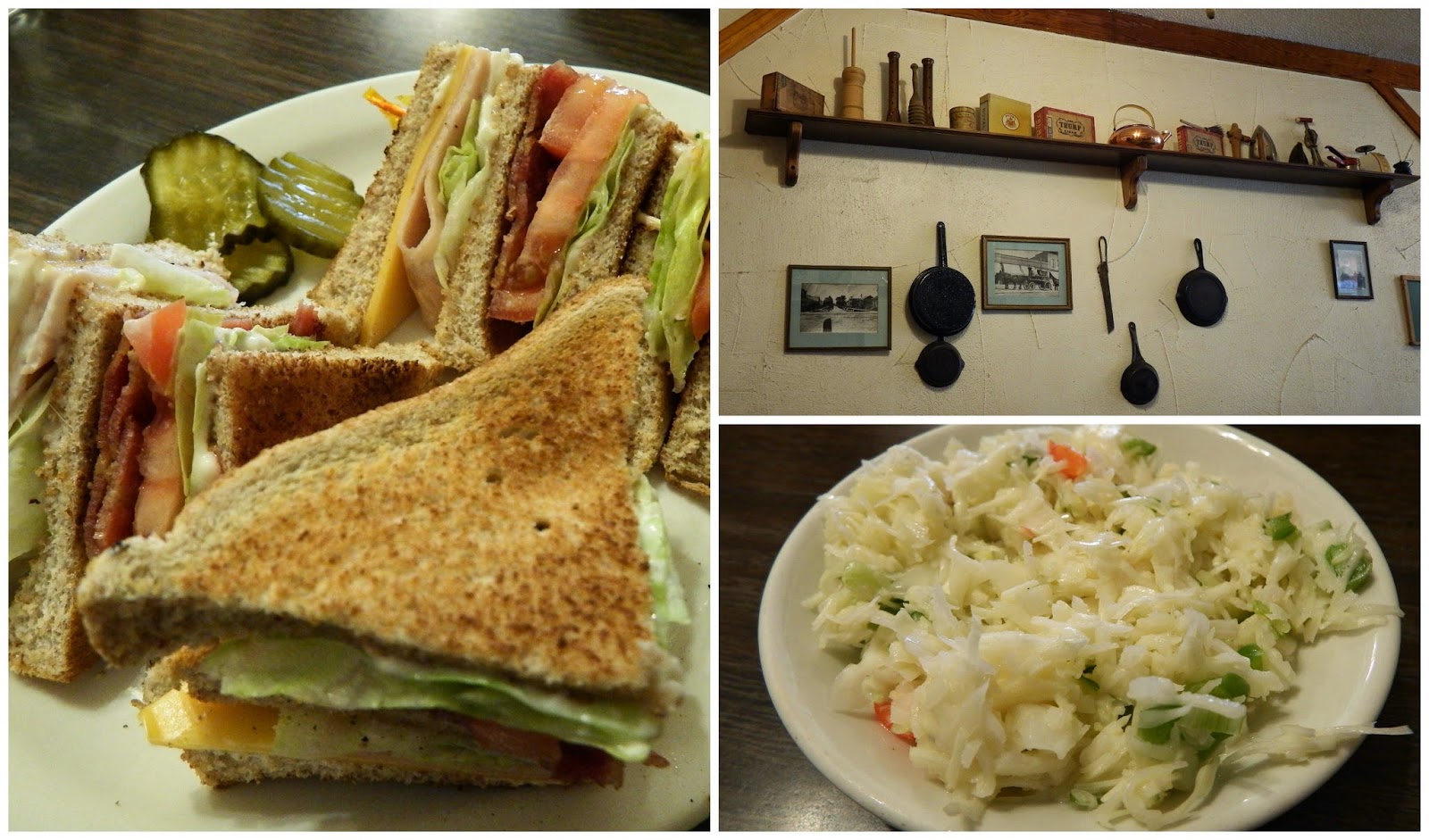 When I arrived back home after 1 pm, I was ready for the couple who had purchased one of our pups arrival.  Of course selling pups is quite time consuming you know.  First you go through all the formalities of seeing if the home is suitable for one of our pups (grill them with questions till they drop), then there is the halfway mark before the pups go to their Forever Homes when they are visited.  Each visit is never a 15 minute "oh that is our pup" kind of deal, some we have had last over 2 hours !!!!  Yes it is all quite time consuming, but you know I love the people who are "solid" and love our puppies, so that in itself makes it all worth it.

Believe it or not, I received a call about our puppies last night at 10:30 pm when I had been in a dead sleep.  Who calls another person at 10:30 pm on a Sunday evening ??? for crying out loud !!!  Then they had the nerve to say, "did I wake you?  I am sorry but we are so excited, and do you have any spotted dogs?"  Give me a break lady a "spotted dog" .... I sit her reflecting back on the conversation *shaking my head*.

Enough of that nonsense, such is the Puppy Business, not always what people might think it is cut out to be.  Hahaha !

I made a Rice Casserole this evening for our Dinner.  Rob loved it, even though I had thought I had messed it up a bit.  Photos maybe tomorrow, but in the meantime it was a recipe by one of Cindy's Recipe Exchange's members, as follows:

I used lean ground beef rather then pork.  Unfortunately the "boo boo" I made with the recipe was cooking the beef first, that was a "no, no".  It was good and Rob really liked it, so I will definitely do again.

Dinner is clean up from, Rob is gone to have a shower to get himself cleaned up and I am going to get the Electric Blanket turned on before I hit the sack, Just North of Wiarton & South of the Checkerboard.
Posted by Cindy@NorthofWiarton at 5/05/2014 08:24:00 pm