Holy Moly it seems like we were gone gone gone the whole day long.  We just arrived back home sometime after 6 pm ?

My day started out pretty good, although the dampness was taking its toll on my body I still kept moving.  I had all the Aussies looked after first thing, a shower, a load of laundry in and some Crabby Cabbie paperwork going.

My poor Crabby Cabbie had a very late night, or should I say "early morning" having not arrived home until almost the crack of dawn.  Again he was up and out the door coming to a man's rescue who called and was stranded in Owen Sound where he had stopped his vehicle off for servicing, and his friend had not shown up to collect him.  No phone book at hand, and no answer at the one Owen Sound Cab Company number I had given him when he had called.  Yes he was thankful Rob went out to collect him and deliver him to his home in Sauble Beach.  I have a good man with a big heart most days when he is not too tired otherwise to have one.

I was waiting for Rob to arrive back home as we were meeting up with our Driver in Southampton early afternoon, when the phone rang.  It was a friend who was in town at her daughter's whom wanted to drop something around to me?  Really what could Alice be coming all the way from Shelburne way to visit with her family and think to have something for me?


Here is dear thoughtful Alice with a tray of goodies in hand that she had made, with a tray in mind for me and my Rob.  You can well imagine my surprise !  Alice thought I was deserving of a treat or two for all I do in supporting my Community.  I am truly honored.  Thank you, Alice, I have consumed 2 of the marshmallow and one of the shortbread this day and ....  "Let Me Tell the World", oh so good ! 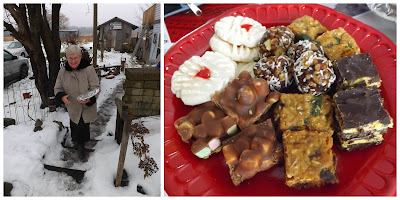 Rob had pulled in shortly after Alice had arrived.  I was sorry we were not able to have much of a visit, but hopefully there will be another time.

Off we headed to Southampton where our first stop was where I got to meet Summer.


Please meet Summer.  She is a 11 year old Great Dane, one of 5 Great Danes her family has had over the years.  It is most unusual for a Great Dane to live much past 8 years, never mind 11 !  Truly she is very lovely.  One of the groups I belong to on Facebook had not long ago posted a Live Cam to an organization who trains Danes as Service Dogs.  Some might enjoy watching it by *clicking* HERE. 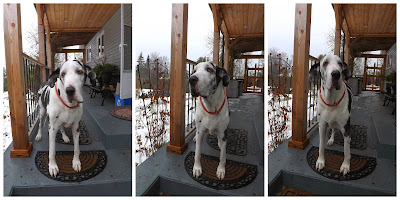 Rob and I then headed down to the Bulk Barn to pickup some Candy Canes to be handed out at Wiarton's upcoming Santa Claus Parade on the 7th of December.  Details can be found HERE.  Then we headed out to meet our Driver, Ron, which we did, thereafter getting a call to go on a run to Owen Sound.

By the time we had arrived back in Wiarton it was late afternoon with us both being starved (or thinking we were starving).  A quick stop into Foodland solved the problem, and good thing as we got home to find our hydro was out ! 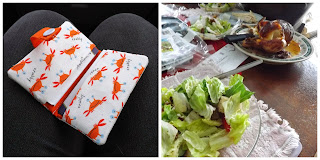 We had barely gotten settled in after eating when Rob was called back out again.  My poor Crabby Cabbie is truly "over tired" more then anything else, with most of knowing what a not nice feeling that can be.

I am tired, my Crabby Cabbie Rob is tired, and you got to know that can't always be a good combination, so I sit in my corner and he sits in his, all peaceful and quiet (Smile) with bedtime not too far from either of our minds, "Just North of Wiarton & South of the Checkerboard".
Posted by Cindy@NorthofWiarton at 12/01/2013 07:37:00 pm