The sunrises this week have been anything but AMAZING !!!

Another stellar morning here Just North of Wiarton & South of the Checkerboard. 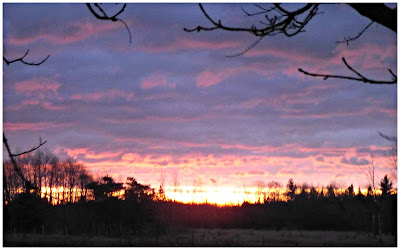 This shot was taken shortly after over at Speedway Road by Sauble Beach.  The clouds are billowy with shots of sunshine coming through. 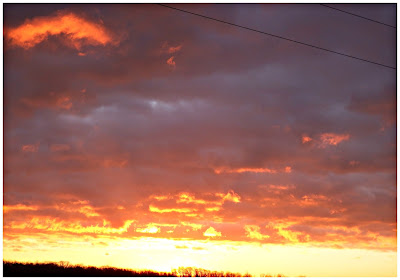 Last night I had called my oldest sister, Jeanne, and her husband, Cecil.


The friend they are presently living with, Brenda, shared these photos on her facebook page for me.  Cecil had been actually speaking to me on the phone when she took the photo. 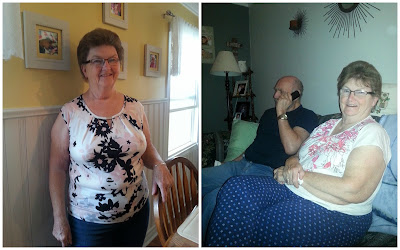 Jeanne & Cecil had moved back to Ontario for a Year, however late this Spring moved back down to Newfoundland, Cecil's home Province.  Maybe in the Spring they will move back to Ontario; time will tell.  As long as they are happy wherever they are is all that counts.

My sister Donna's husband has been in the hospital for the past week with a "weak" heart, and water on his lungs,  He had an angiogram today to check for any blockages, however it proved there were not any.  Good news, however he will have to remain on heart medications the remainder of his Life, more then likely having to give up long haul truck driving.

It has been a tough year for both my sisters.  Donna was diagnosed with Stage 2 breast cancer this February, finishing up some heavy duty Chemo and Radiation just over a month ago now.  Cancer runs on my Mother's side of the family with herself having a breast removed at 80 years of age, and her own sister having both breasts removed in her 50's.

Donna will be going for genetic testing February 2016, which will give myself and her 2 daughters some future insight.  We will wait and see.

Jeanne's husband has problems with circulation in his legs, as well as problems with his heart.  He just recently had his driver's license revoked, and Jeanne had hers taken when she had her stroke.  It is difficult when one has health issues that takes away independence, is it not?

Us girls have had quite the Year, with prayers 2016 will be better for all of us.

My day was full,  Too full, however I had a totally relaxing 1 hour of light therapy, zoned out completely.  What got done at home? dishes and the bed made, not a thing more.  That is okay, as there is tomorrow behind hopefully behind another stellar morning, Just North of Wiarton & South of the Checkerboard.
Posted by Cindy@NorthofWiarton at 12/11/2015 07:25:00 pm