When I first looked at the clock this morning it had been around 4 am.  I could not go back to sleep so I got up, stoked the wood stove, had a cup of tea while updating Facebook Social Media pages, while patiently waiting for it to be a half descent hour to wake Rob up.  Once the hands of the clock got to 6 am, that was it, I could not wait any longer.  Rob was woke, the Aussies all looked after, and we were out the door by 7 am.  I was EXCITED !

Why all the excitement one might wonder for someone wanting to be out the door by 7 am on a cold blustery Sunday morning? what could cause more excitement for me then the prospect of seeing my grandchildren, I really don't know at this state in my life.  Our scheduled Christmas Dinner with them on January 5th had been cancelled due the beginning of a Blizzard, and nothing was stopping me from going this day.

We headed South ... by the time we had crossed over Hwy 86, and through Linwood, we had been passing by Church goers. 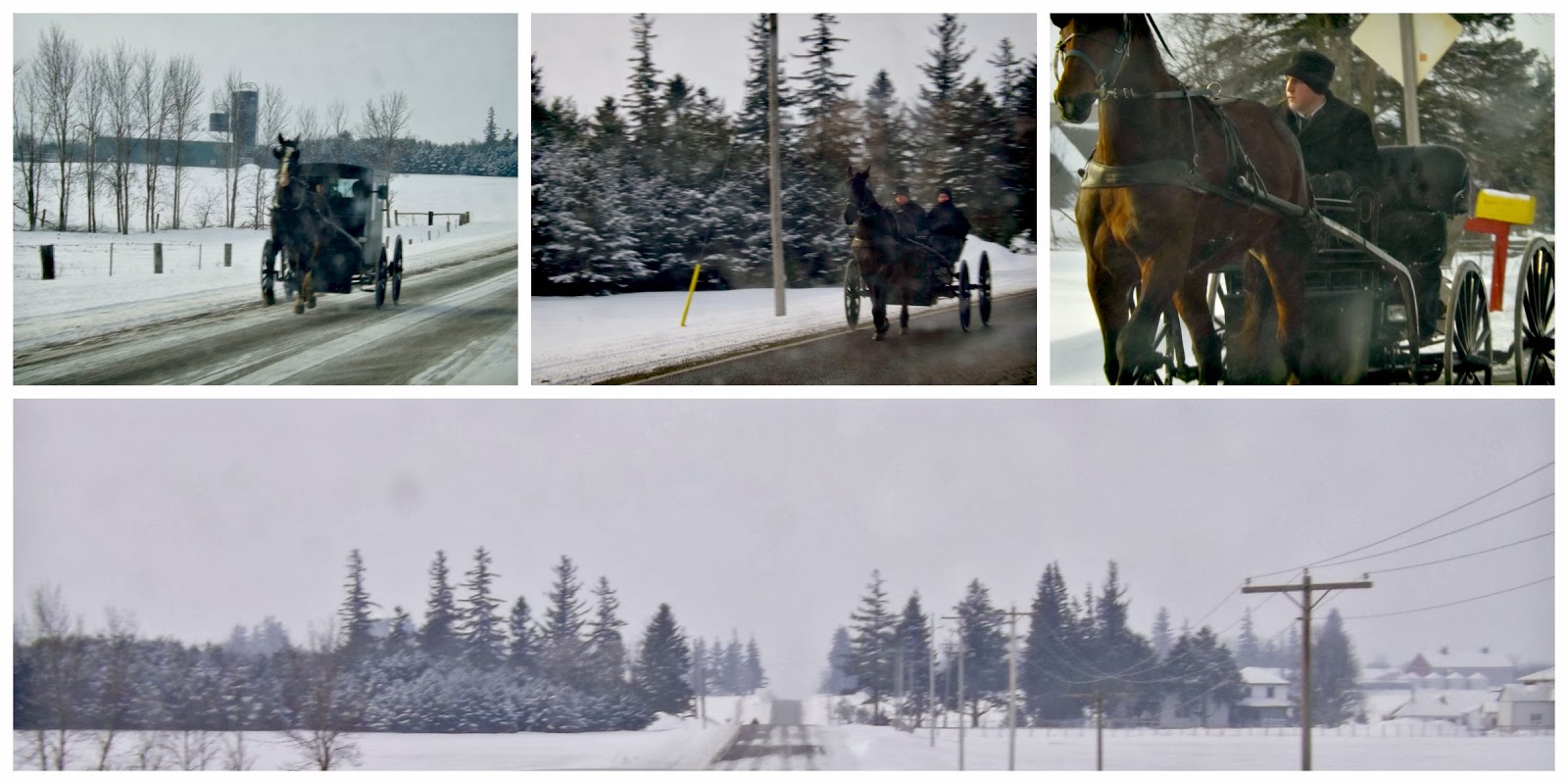 Rob had us in New Hamburg in record time !  even after we had made a quick stop in Wellesley to drop off a Apple Cinnamon Bread to our Insurance Broker (an nice young man who has been looking after us very well since his father passed on a few years back).

Here is our "crew" having themselves a blast while I watched on on..  They were playing "keep away from the shark".  Josh this time around was the "shark" down in the water while the others tried their best not to dangle off their boat.  Oops Connor was not so lucky, being captured by the "shark". 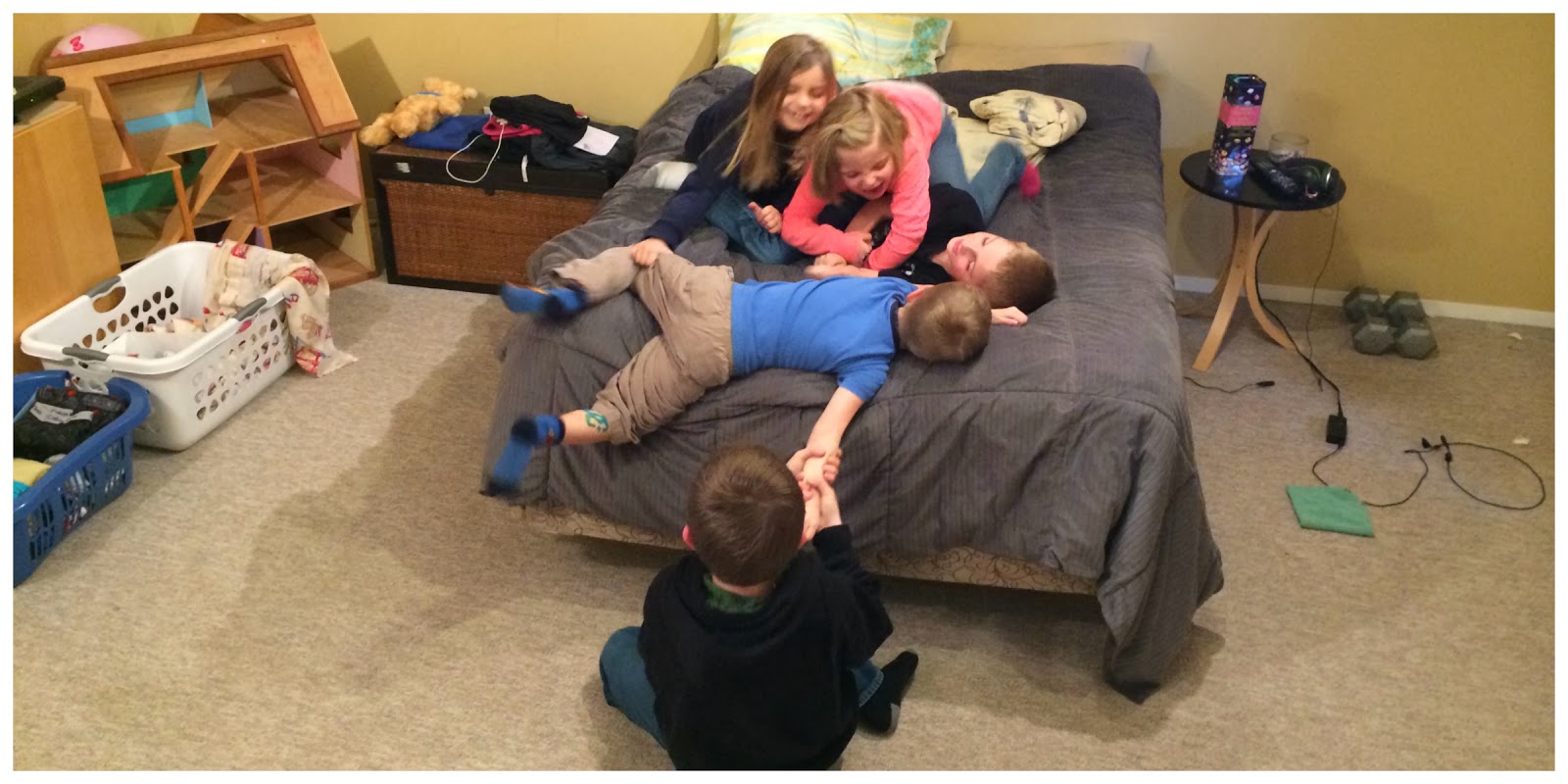 When we had first arrived I had the biggest hug and kiss from Aiden, as we had not seen the boys for such a long time, that it brought tears to my eyes.  Connor took awhile to come around, but he did with lots of hugs later.

Poppa also had some "prime time" with Aiden too.  He obviously misses us as much as I miss him.  We have been having Aiden for weeks on end since he was barely 2 years old, so we have had more of a bond with him.  One Year when he was about 6 years old he had told his parents he didn't want to go to Grandma & Poppa's as we were "too old".  Well it took a bit of convincing that year for him to come, but after I told him how much we both needed his help, that sealed the deal and he was back here with us in a "blink of an eye".  Maybe he will be the one looking after Poppa & I in our elder years ... once can always hope. 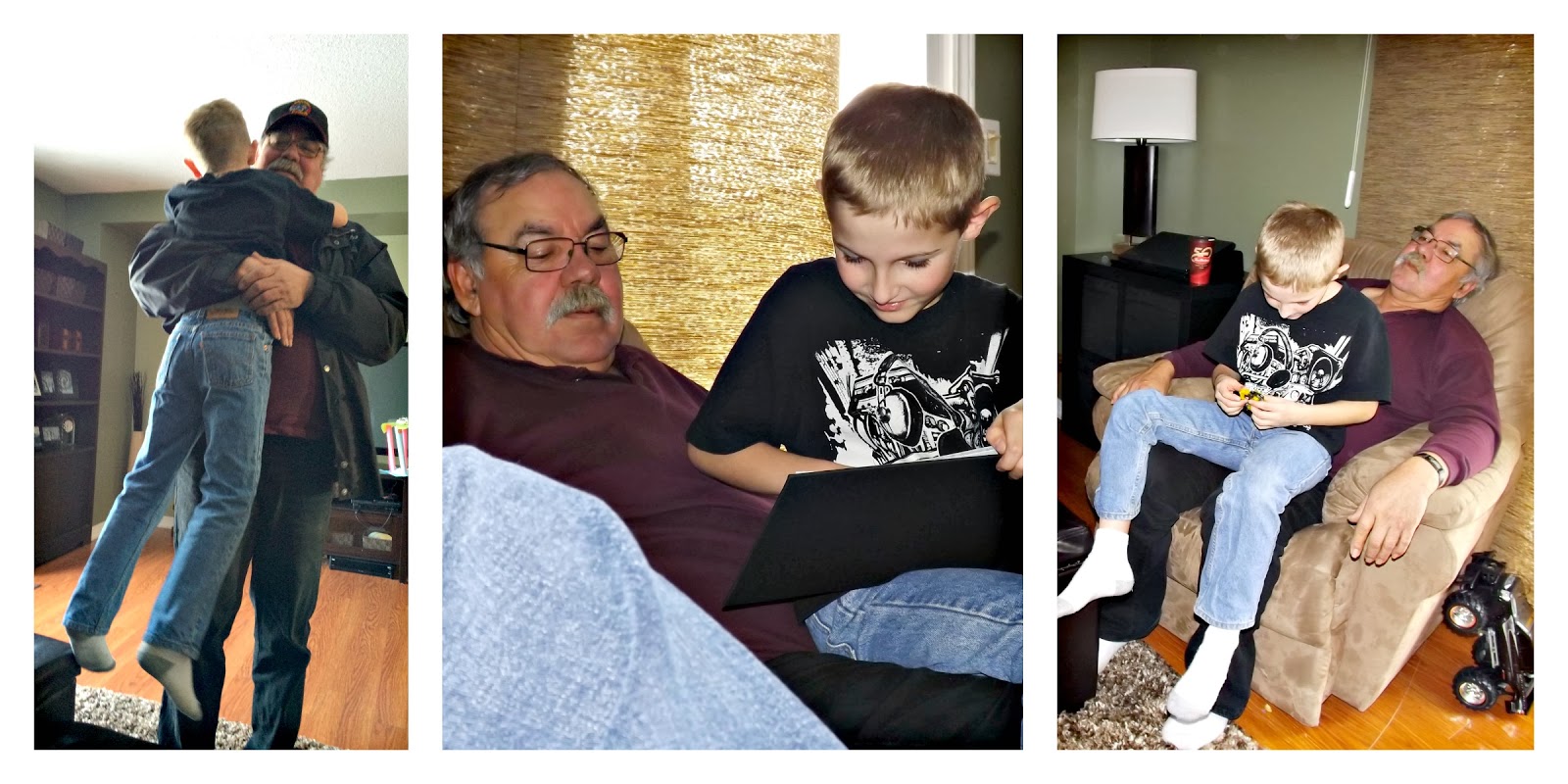 I was enjoying being entertained by just sitting back and taking it all in.  I was in my glory this day ! 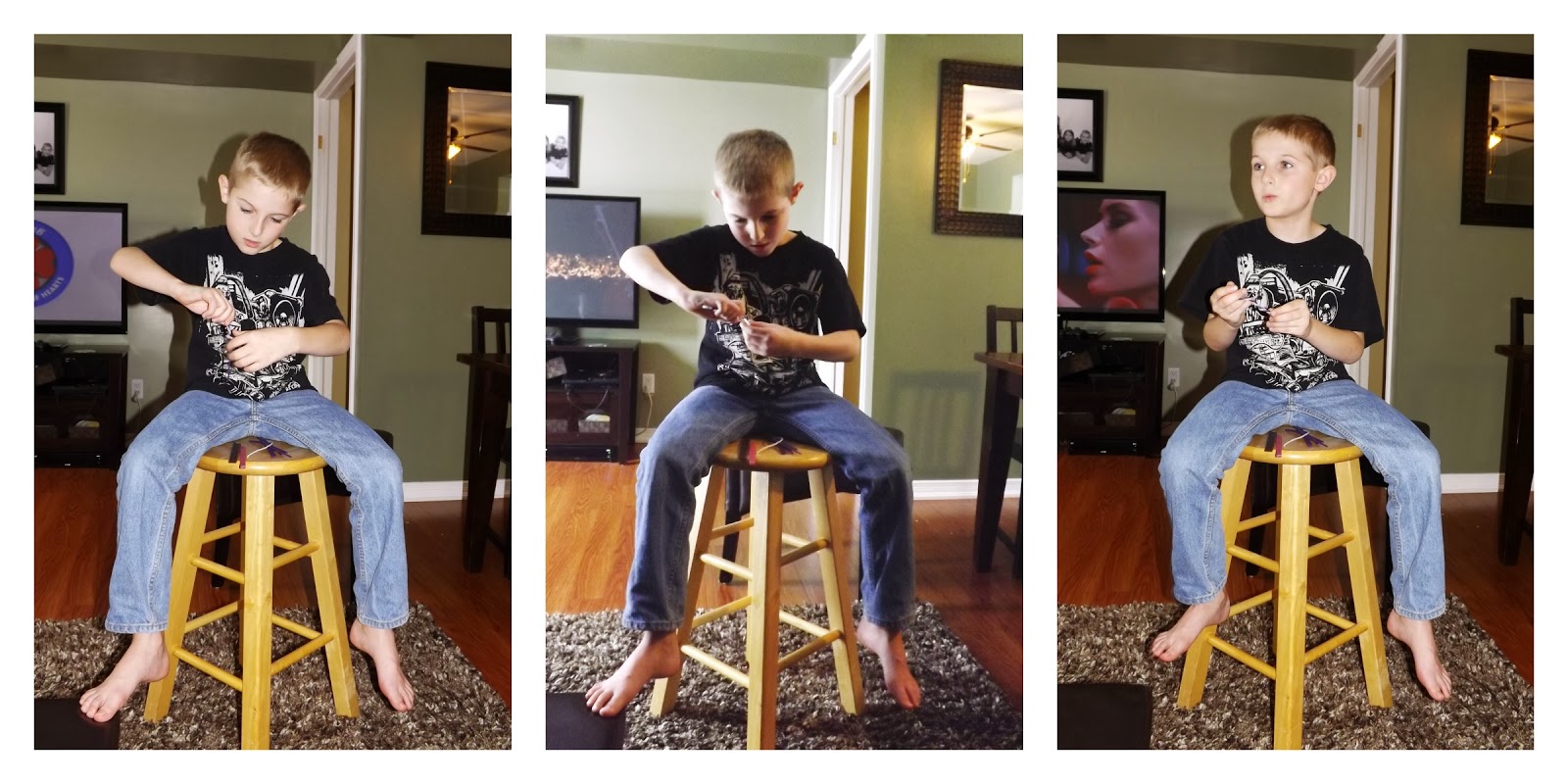 There had even been "show & tell" with Briar & Connor showing me their tattoos.  Then Chloe & Connor had to show me their "tats" just like dad on the back of the legs.  Monkey see, Monkey do ... hahaha. 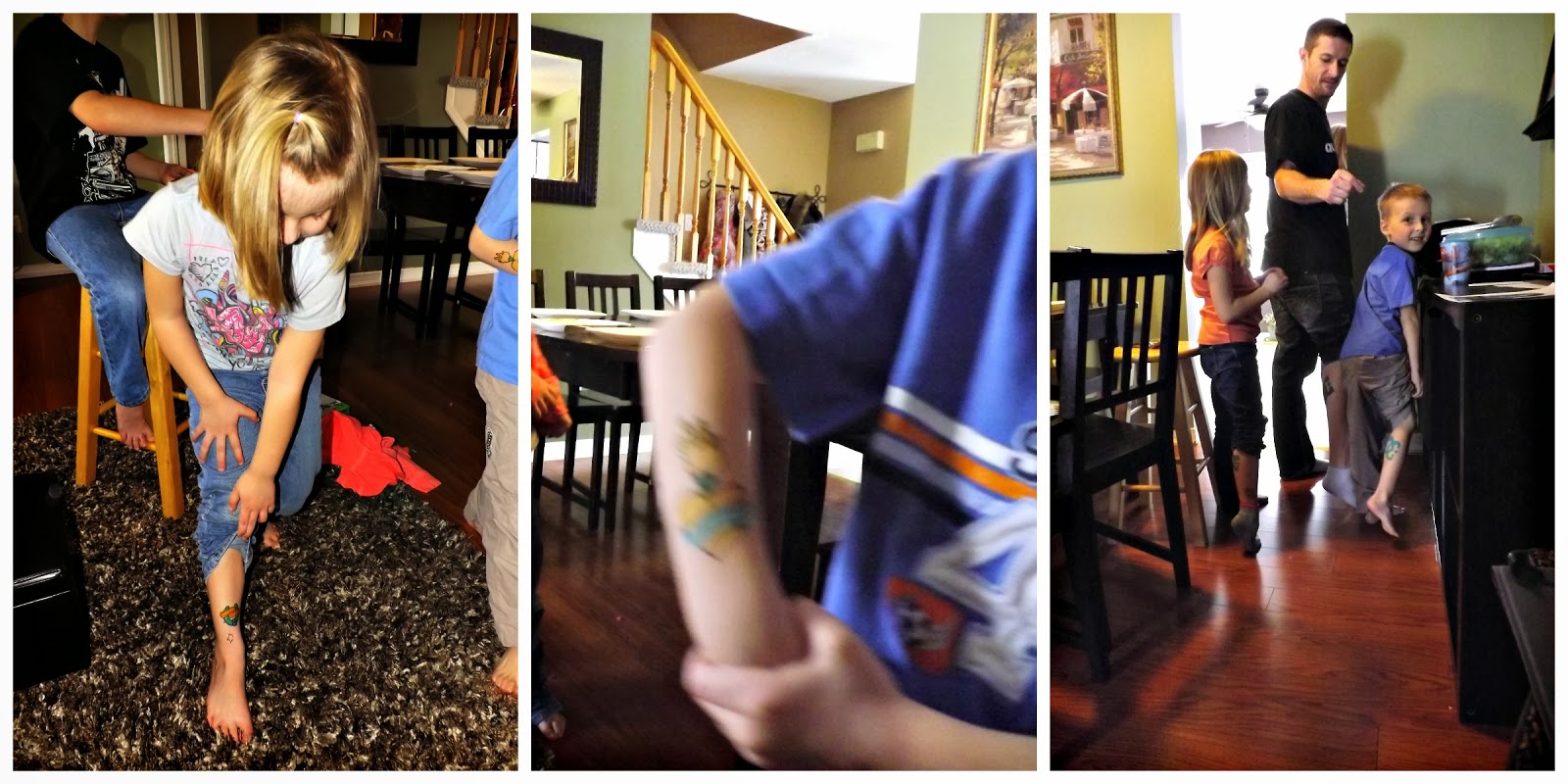 We were having our meal today at the Lunch Hour.  Our friend, Bob, showed up just in time to supervise the table being expanded to seat us all.  Paul, Liz and Rob managed to get it all sorted, while Bob watched on. 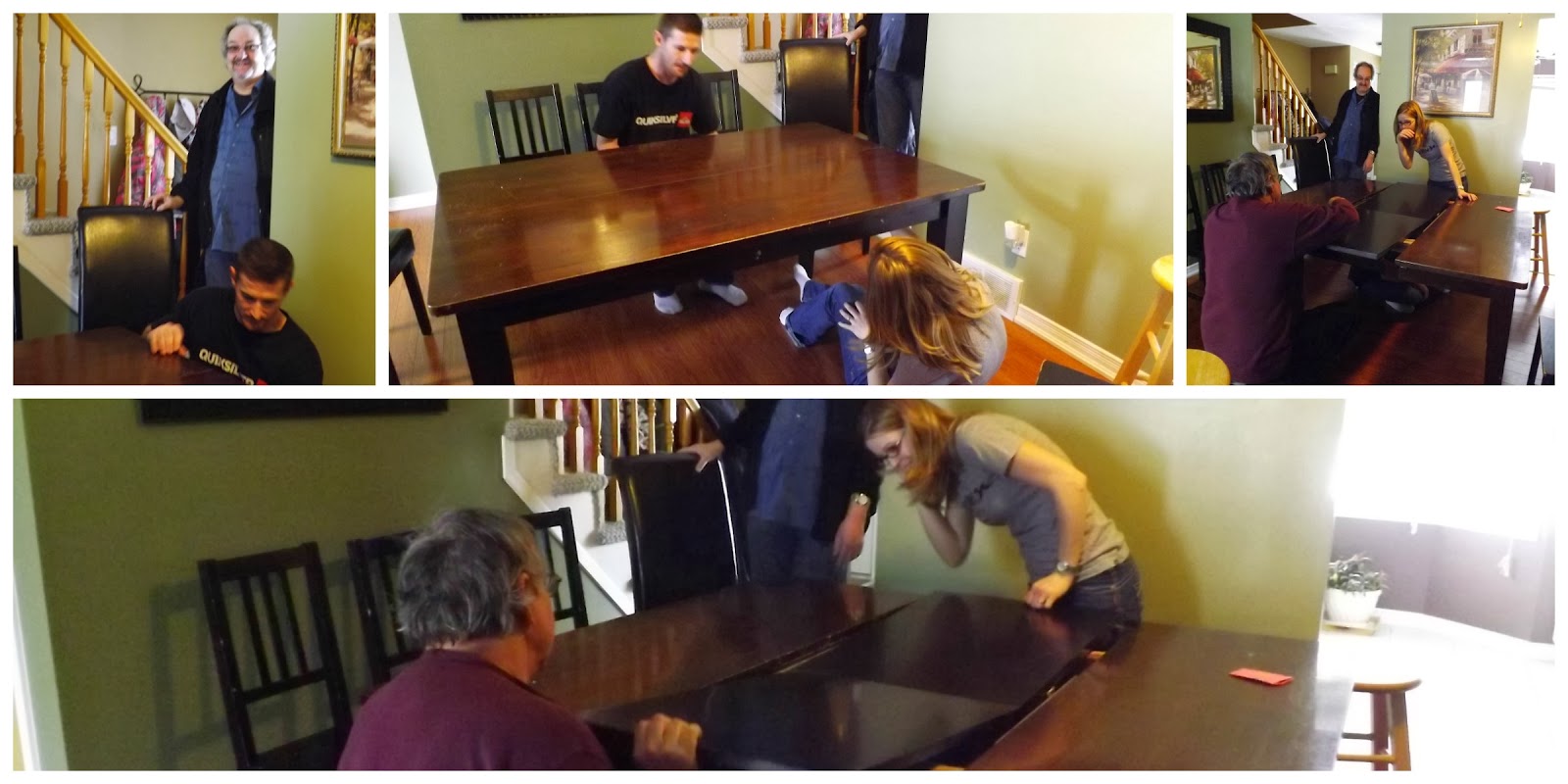 I love sitting all together at the table to have a meal.  This has always been the way I have done it with my boys when they were growing up, and still with the grandchildren.  It is nice to see Liz and Paul are doing the same with their children.  It is a time when everyone can be brought together to have quality time with each other. 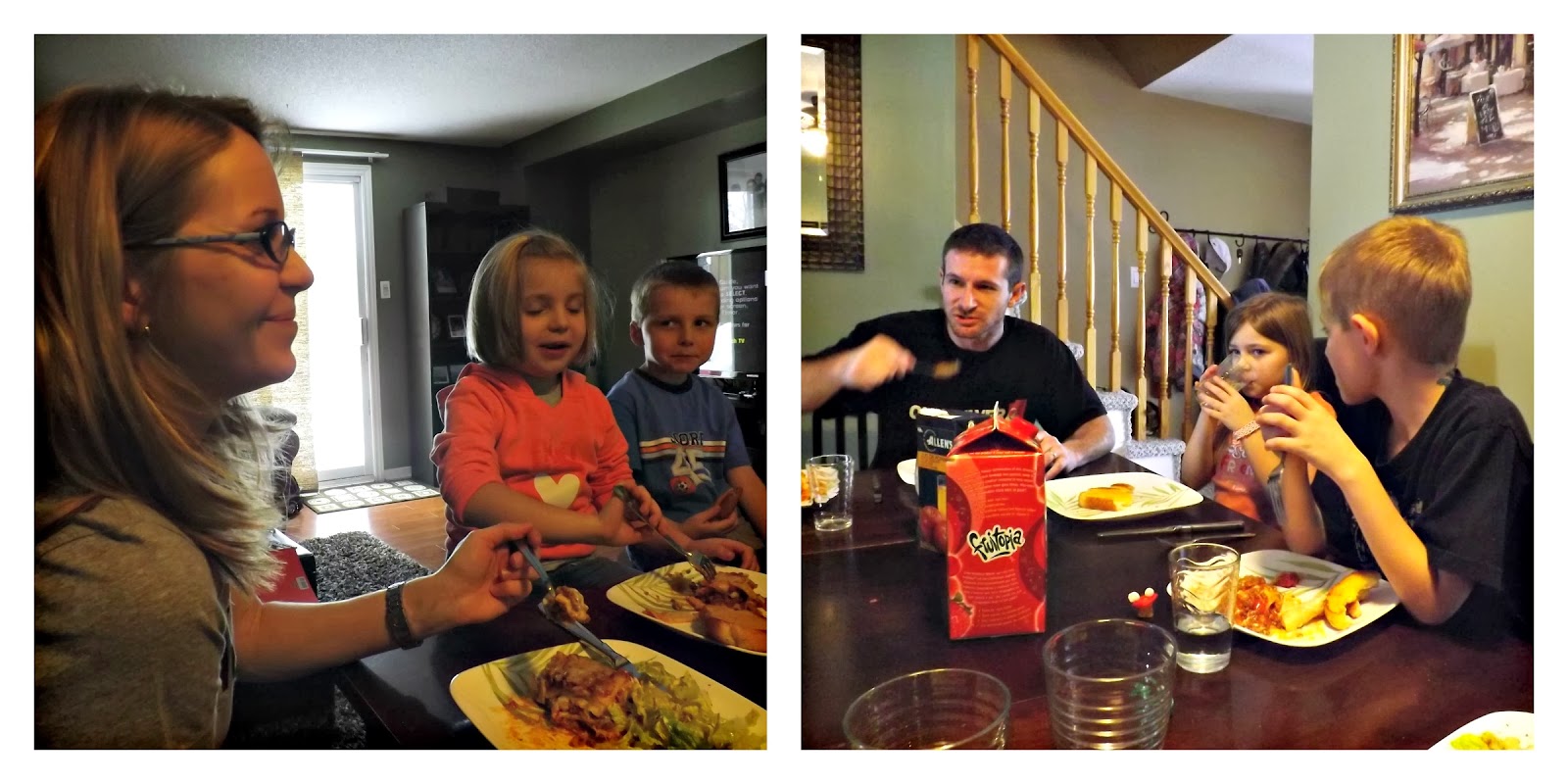 Here is my Ham, our Connor.  He is the most lovable Ham I think I will have with Briar coming in at a close second. 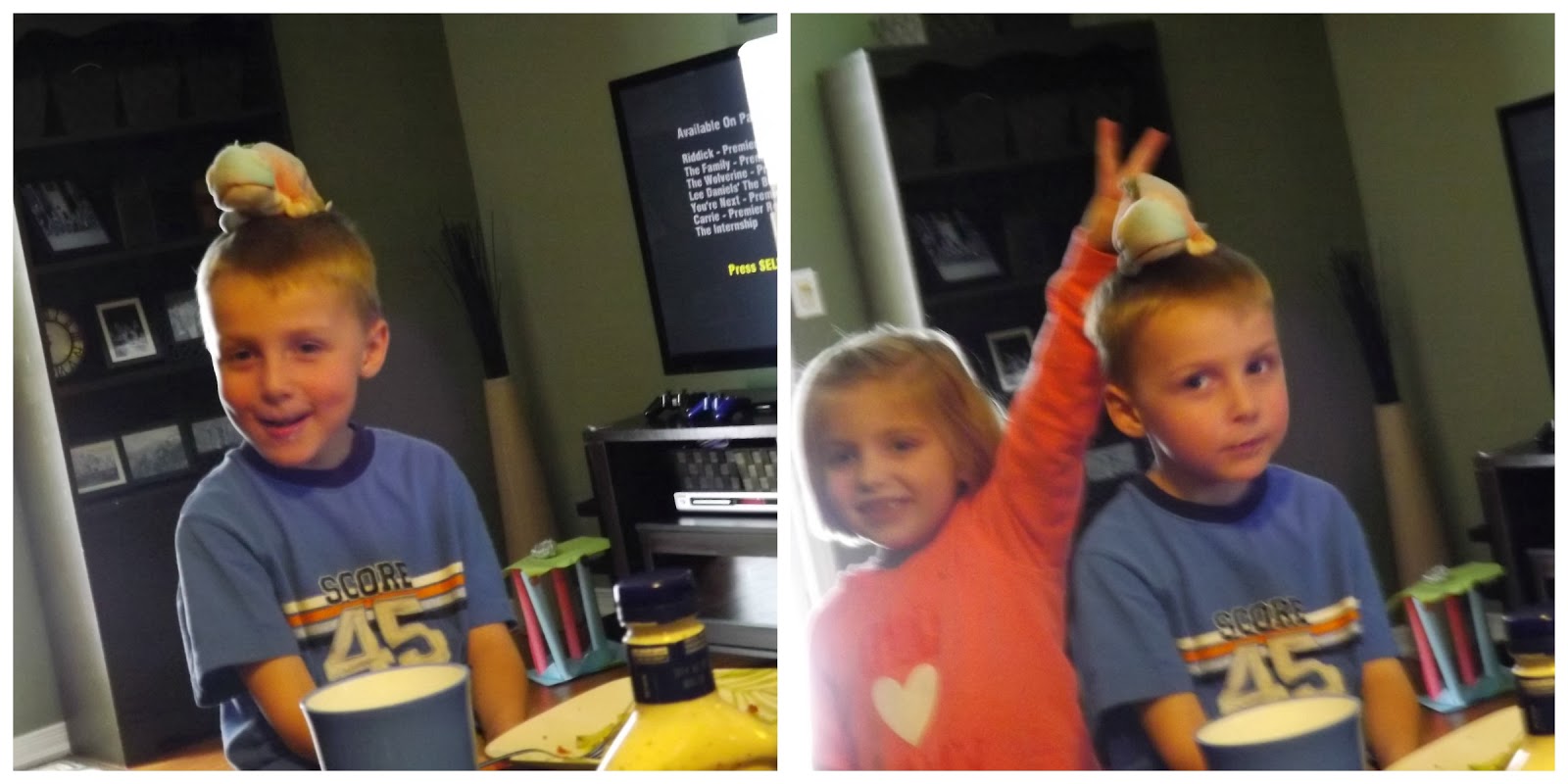 Dinner was beyond AMAZING !  Thank You, Elizabeth, you out did yourself.   Your Lasagna with a "twist" like nothing I had ever had was a hit with Rob & I.  I can't wait until I get my hands on all the ingredients which made it so tasty. 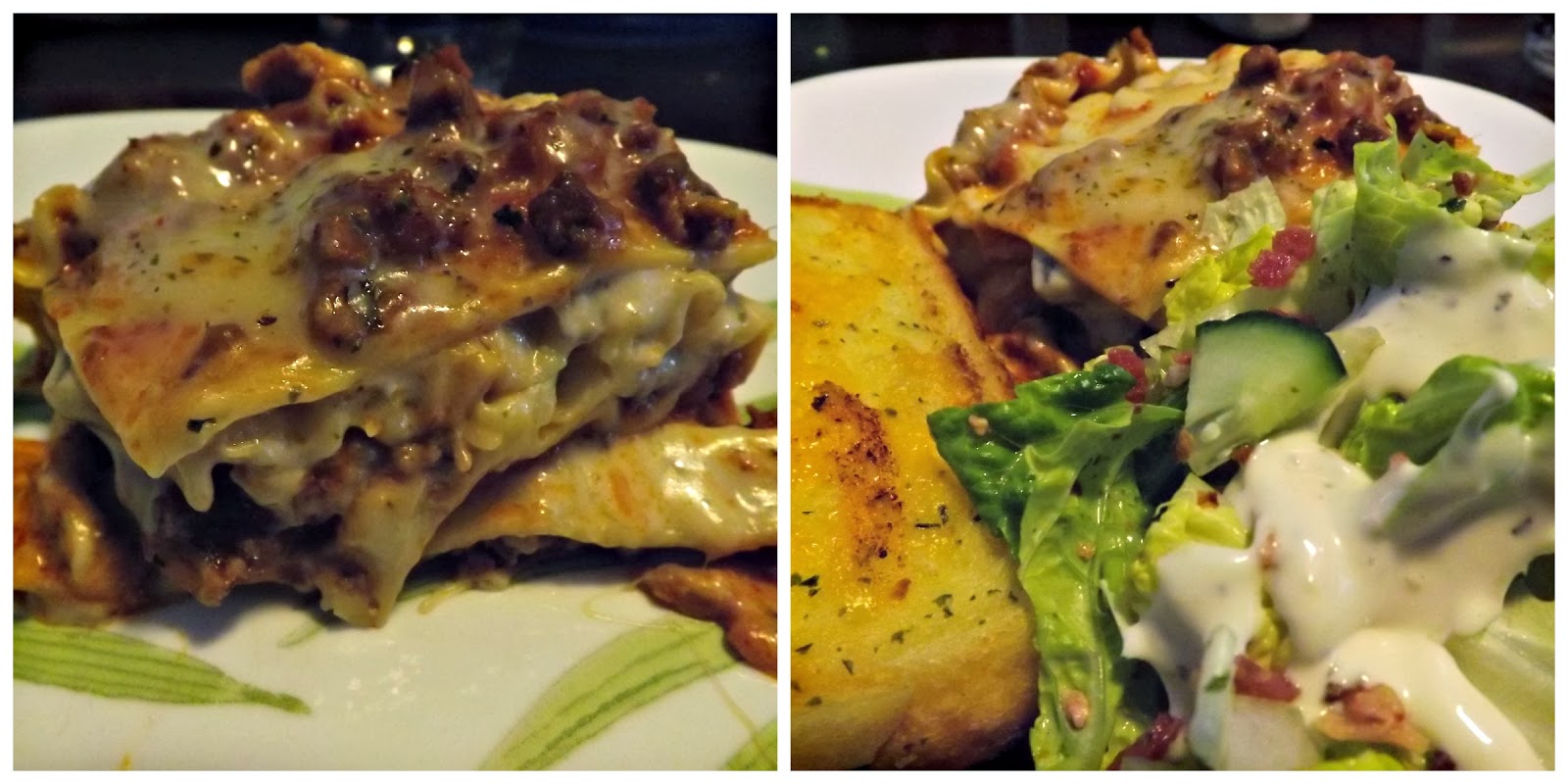 I had brought dessert.  Some had "seconds".  Chocolate Arrowroot Bars with Vanilla Whipped Cream, thanks to Rock's Recipes. 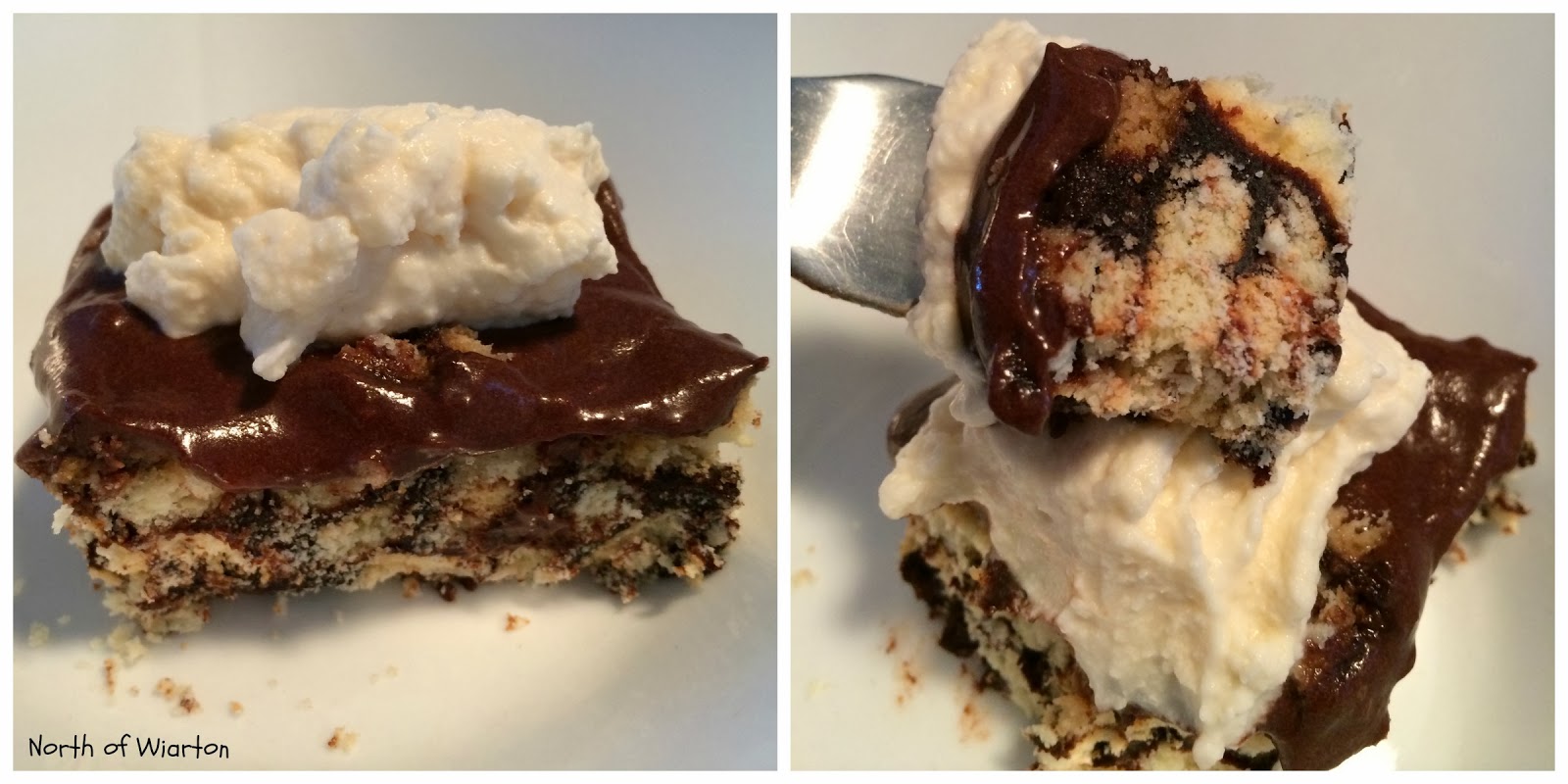 Recipe please?  Please *click* HERE.  For some reason my chocolate center was not as firm as shown in the Rock Recipe's photo, but really is was very very good.  I will definitely adding this recipe to my favourites.

Yes my Son, Paul, was taught at a very young age, how to clean, do laundry, shop, cook and wash dishes.  It is obviously paying off now for the little lady of the house. 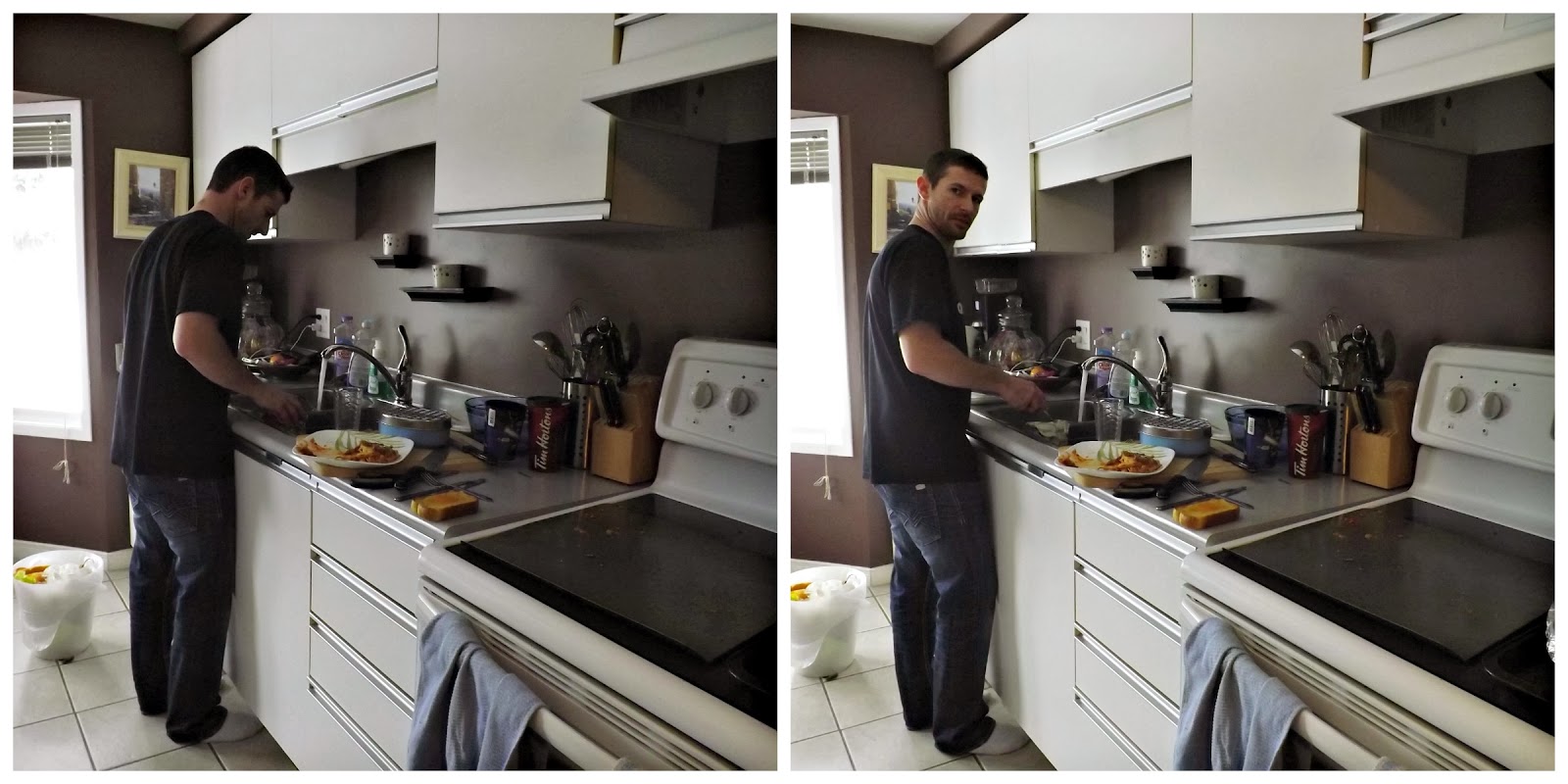 Rob and I decided we would take off back home by 1:30 as we had been getting reports from back up North at home the weather had been very nasty.  Almost like the Blizzard we had experienced 2 weeks prior.

Rob & I had the pleasure of taking Aiden & Connor back along home to their Mother's this afternoon.  I was still being entertained on the way there. 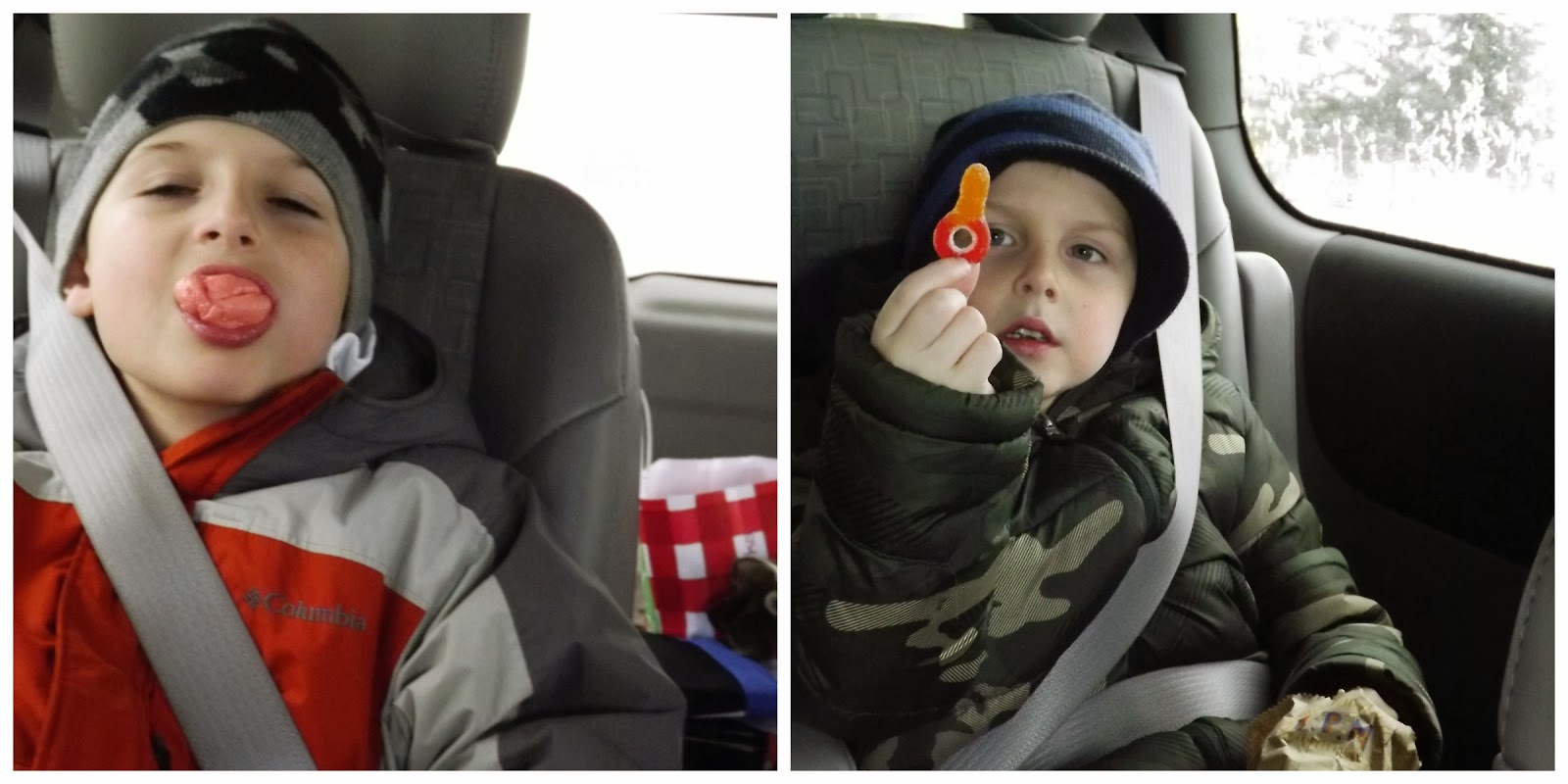 The roads had been on and off all the way home.  We could not believe when we had seen this poor Soul out hitching in this bitter cold nasty weather ... hope they got a lift before frost bite.. 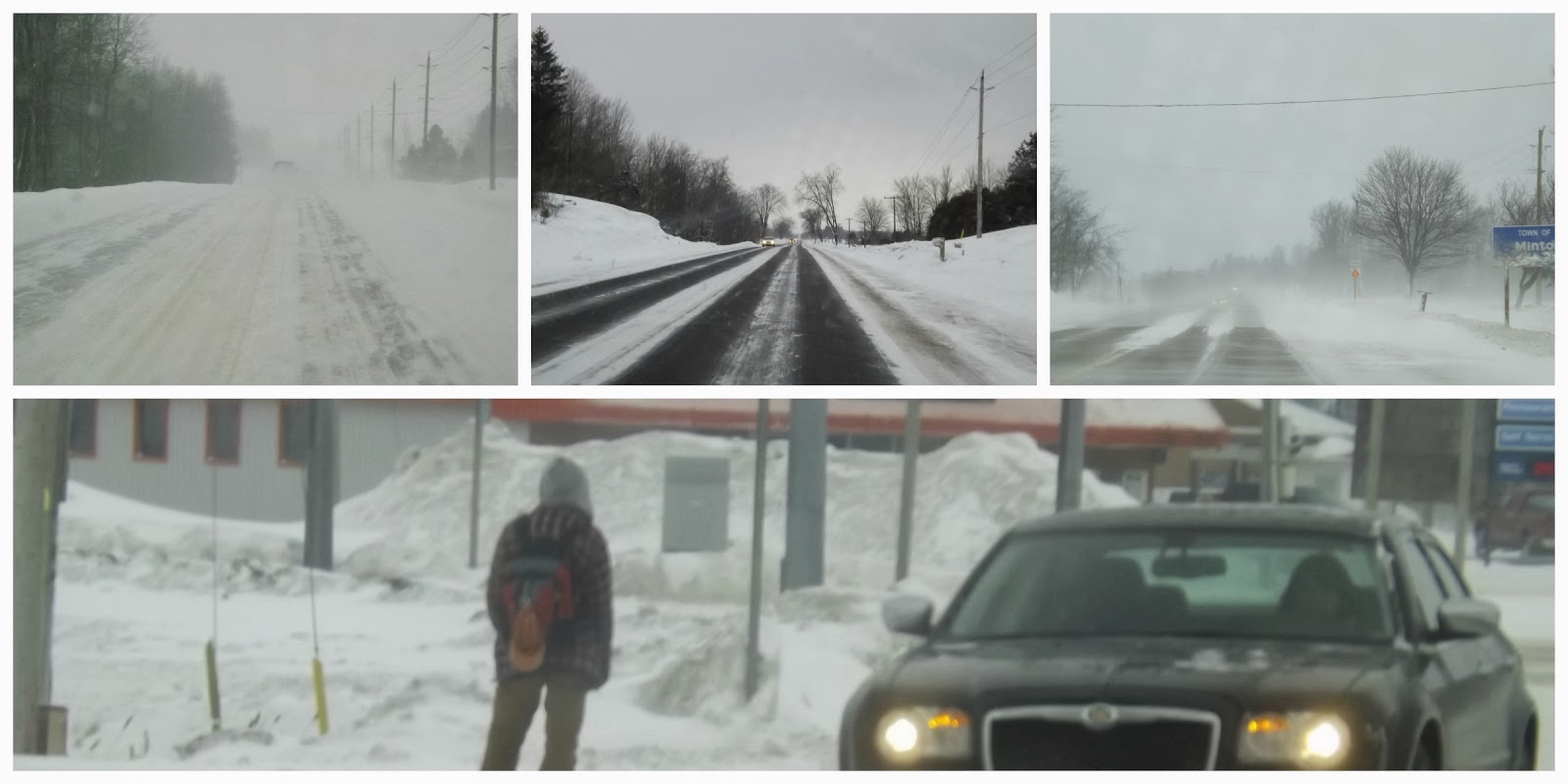 With a bit of tension, on my part, we finally made it back home about 5 pm.  Home Sweet Home with lots of snow having had fallen since we had left so early this morning.  The drift Rob had to blast through to get in our driveway was well over 3 feet.  Our final excitement of the day for us. 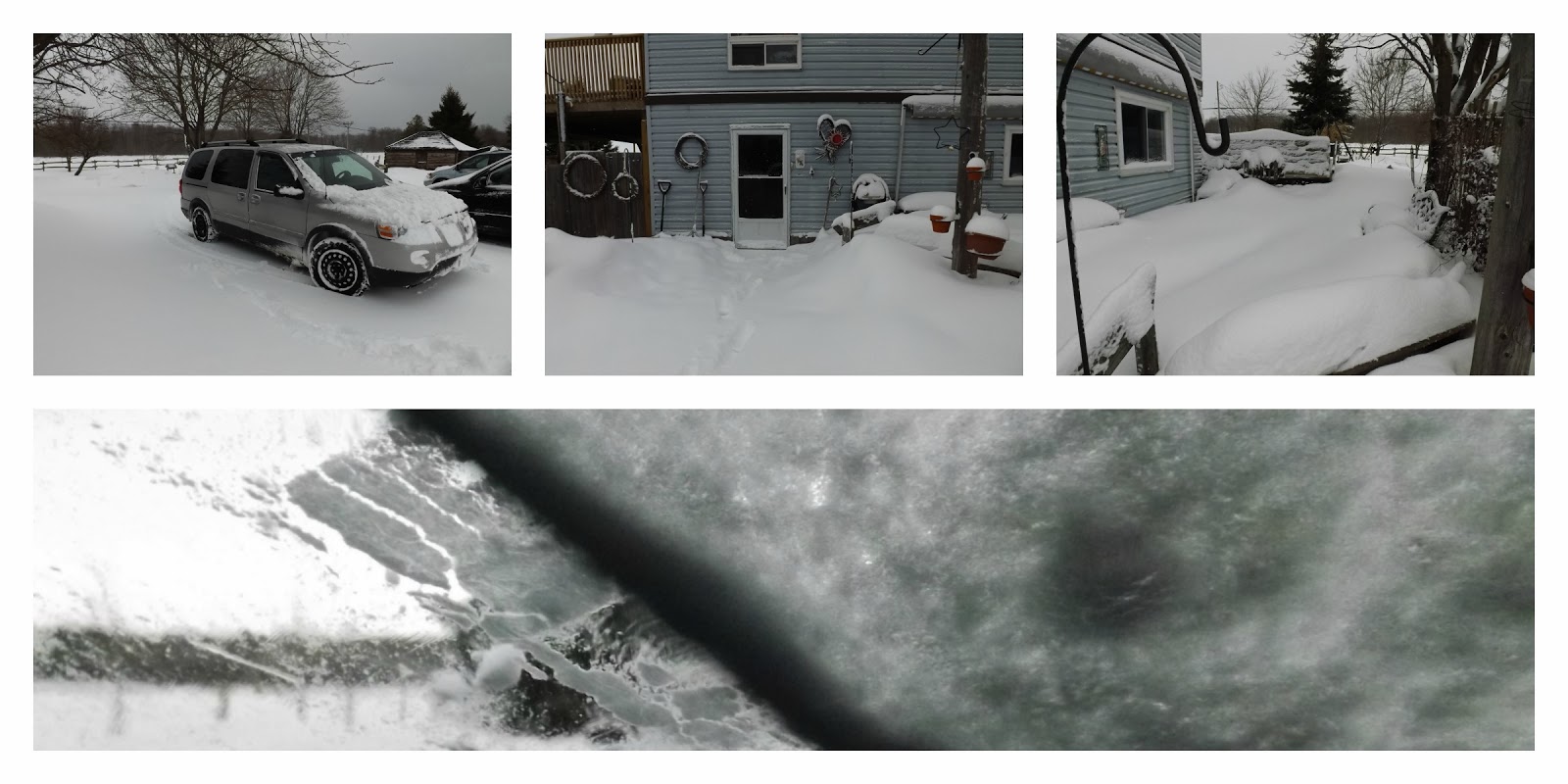 A pleasant surprise was getting a Christmas Gift from Liz, Paul and the Children.  All the school photos, some treats and soaps from Bath & Body Works.  Thanks Gang, I was really happy about these gifts ... xoxoxo. 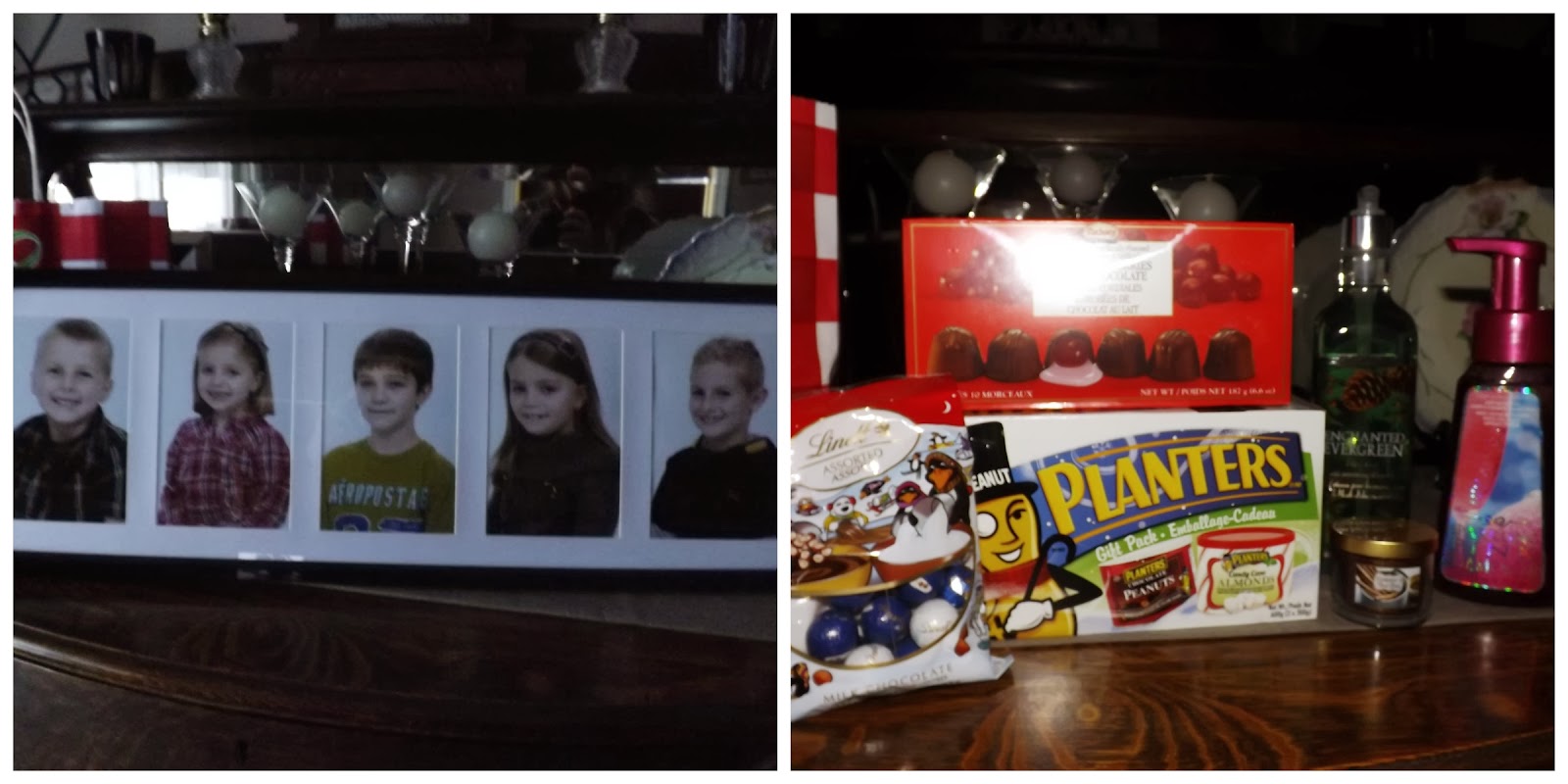 We had a wonderful day with our family.  I am EXCITED for many more days such as the one we had this day, in our future, "Just North of Wiarton & South of the Checkerboard".
Posted by Cindy@NorthofWiarton at 1/19/2014 08:15:00 pm