Rob & I brought in the New Year with our "party animal", Bandit, who obviously could have cared less.  Rob? shortly after the Clock struck Midnight his Crabby Cabbie phone started ringing and out the door he went.  Me?  I called it a night by 1 am, baffled that I could stay up this long (usually this is the time of the morning I am waking up). 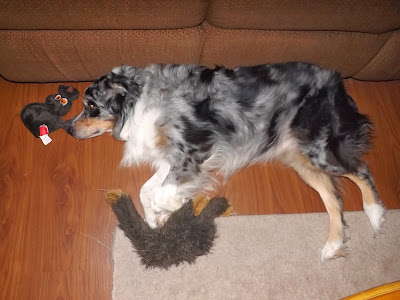 Rob was home after 3 am, I was back up this morning at my usual time before 6 am.  All was good.

I thought a New Year should be "kicked off" with a couple of things.  The first was a newspaper clipping I re-found when putting some decorations away today.

A BLAST FROM THE PAST !  Here is my oldest Sister, Jeanne, my Mother, Stella, and Patsy Smith-Dennison, my now Niece Jo-Anne's Aunt.  This was take in 1975 in front of the Woolco Mall on the Sunset Strip in Owen Sound.  Back in those Days it was Christmas Cards & Wrapping Paper that was the big sale "ticket" items, not electronics which has been the trend for how many years now.  The Mall has long been gone replaced by a No Frills Store, Galaxy Theatre, Restaurant, Dollar Store & a Giant Tiger store. 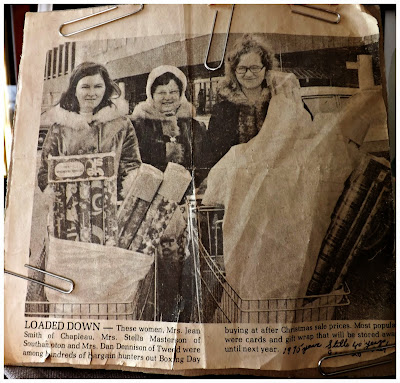 True to myself, I bundled up today to head out for a walk.  Since I lost a 2nd pair of gloves within 2 weeks, I dug in the Deacon's Bench to find a pair of mitts my Sister Jeanne had knit me at least 10 years ago.  I was grateful for them today as they were really really warm and cozy. 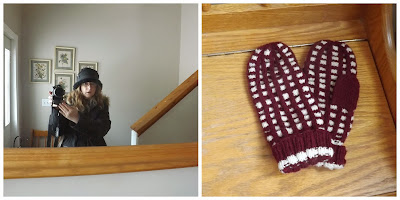 I had picked up my neighbour and we headed downtown Wiarton for a walk.  There were definitely no crowds to fight for sidewalk room this day.  It might have been clear and sunny, but man oh man it was COLD !!! 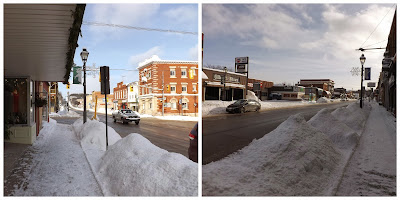 I had won $2.00 on a Lotto Max ticket I had bought.  What a perfect day to put this twoonie into my "sealed" Nest Egg to start saving for the end of this year. 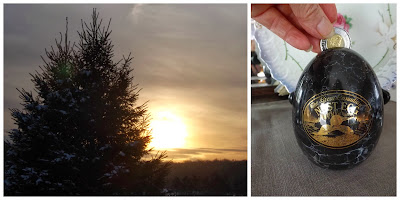 I had some Turkey Bucks saved from the local Foodland Store.  They had to be used up by the 26th of December, so Rob and I had went in then to find they had been out of Turkeys however were substituting Prime Rib Roasts.  We picked one up to have for our New Year's Day Dinner.  The $15.00 roast had cost us $3.00 after our Bonus Bucks had been applied.  Another good start for us this day.

Since I had taken the roast out last night it had still been partially frozen today.  Carrots when in the bottom of the Crock Pot to make a rack for the Roast to rest on, with an onion also put in for flavour.  Then a few shakes of Soya & Worcestershire Sauces, along with one or two of Montreal Steak Spice.  It went on HIGH for the 6 hour setting. 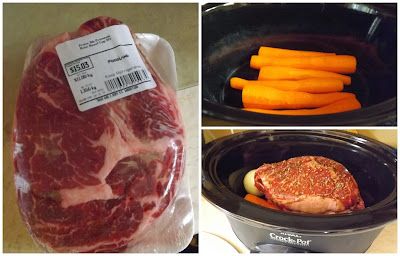 While Rob cleaned out the driveway really well today, I puttered a bit in the house.  Nothing too strenuous mind you.  Another wheel bearing went in Rob's Crabby Cabbie vehicle, the opposite side of course to what had been done a week ago, so late this afternoon we dropped it off to our mechanics.  By they time we had done that I returned home to get our Dinner in place.

Potatoes were peeled and set in the pot to boil, while I set the table ...

A New Year, a new day and a new fresh start deserved a bit of luxury and ambience.  This is what I set out to accomplish. 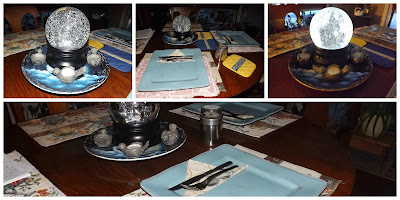 Dinner was amazing !!!  the carrots full of flavour and the roast falling apart it had been so fork tender.  Truly a meal to "fit a King". 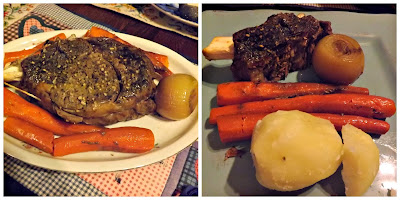 Dinner over with, dishes done up and a cup of tea sitting beside me, while I sit with my feet up relishing the relaxing day Rob and I had this day together, "Just North of Wiarton & South of the Checkerboard".
Posted by Cindy@NorthofWiarton at 1/01/2014 07:42:00 pm