That Was A HAM Dinner To Write Home About !

I absolutely LOVE when my husband gives me a hand with the Aussies first thing in the morning.  A "change up" in routine (the Aussie routine never changes up in the morning) with him doing it instead of "moi" is quite nice some days.

Rob was out the door by 7:15 am, not returning until after 11:00 pm.  What would I possibly do with myself all this time he was gone?  I took advantage of the time to sort Crabby Cabbie paperwork for the months of October and November.  With it all sorted it is just a matter of entering it on the books, and "voila" by the first of January, another 1/4 will be finished.  YAY !!!

When Rob did get home we had to head downtown to get a new door sweep for one of our outside doors, as the other had totally broke off.  Sadler's Home Hardware was first stop, then into the Great Canadian Dollar Store to get some picture hangers.  I had high hopes the 3 pictures I had been waiting for months to be hung was going to be done this day .... wrong !!!

By the time we had returned back home, Rob was called out again and gone for another couple hours.  Better he be gone and out working, then sitting at home with so many lay-offs going on, and why do so many happen just before Christmas????  could they not lay off a couple months earlier ???

Our Son did not only get laid-off his job of 13 years, just last week, he also learned today that after many many years of being in business, they CLOSED the doors for good.  A very *sad* day for our son, Paul, and many others.  He feels totally lost since he had been working for this company since he was 17 years old.  Very *sad* indeed.

These times almost feel like the early 90's when there had been also many lay-offs and cut-backs.  It always seems to get worse before ever getting better.  I pray he finds something in the way of employment sooner then later.

Both Rob and I had been feeling very tired today, so having being invited to my Auntie and Uncles for Dinner this evening had been perfect timing.

Late this afternoon we headed out into the blustery day. 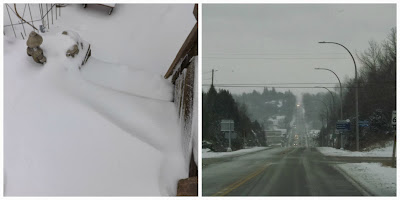 We headed on down to Port Elgin, where we stopped in for a bit of a shop at the Walmart Store before heading on over to Auntie's.

There is always warmth and happiness walking into my Aunt and Uncle's Home.  Auntie made sure she welcomed us in full "Reindeer" attire.  I also could not help but admire the lovely lights just inside the door she had purchased at a Bazaar this past Year. 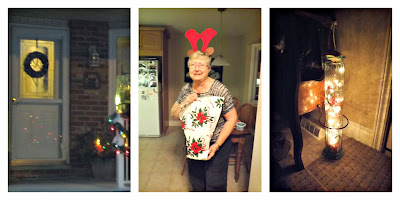 My Cousin Vi, and her husband, Ross, had also both been invited.  It was nice to catch up with both of them too.


The Head Chef, and her assistant, were busy in the kitchen while the rest of us relaxed.  The table had already been set just waiting for the Ham, Scalloped Potatoes, Mini Brussels, Ginger Carrots, Relish Tray and bread to be served up. 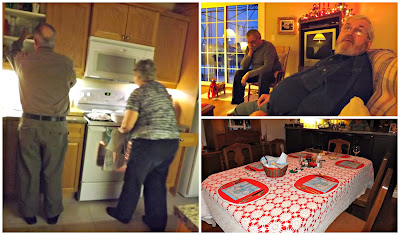 Dinner was amazing, as usual, and the evening very relaxing.  Thanks Auntie and Uncle, you out did yourselves once again.  That was a HAM dinner to write home about !

We head back home about 7:30 pm.  The roads were really good with only a few blustery moments here and there, nothing threatening or making driving unbearable at all.

The 2nd part of the "new" Bonnie & Clyde series is on tonight.  Personally I enjoyed the original 1967 Movie starring Faye Dunaway and Warren Beatty much much better, didn't you?