I had thought I would be posting my day yesterday, however that was not to be earlier this day as I awoke with a terrible migraine headache again.  Nothing seem to bust it out of my system.  I have been a migraine suffer since my late teens, so I know when meds are not going to work, they are not going to work.

Let's see the past 24 hours had me taking Tylenol 3's, Axert (migraine meds), and finally what kicked in was the 1200 mg of ibuprofen.  This relief did not come until late this afternoon.

Back to the highlights of my yesterday when I met up for our Annual Christmas Luncheon.  This Year it was my Aunt Gladys (my dad's sister), my first Cousins, Vi, Suzanne, Peggy, and Paula, and my Niece, Jo-Anne.

We all met at the Green Door Cafe, downtown Wiarton.  My "bland" lunch consisted of a plain turkey burger.  My Auntie and Cousin Vi were going to be potlucking it that evening, so they went light with a bowl of Tomato Basil Soup each and splitting a Tuna Sandwich.  Jo-Anne had the special of the day which was a mixed platter with a side Caesar Salad. 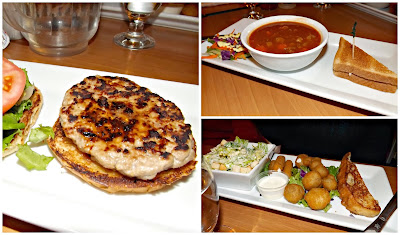 It was a fun lunch with lots of chatter, and a few small gifts exchanged.  Auntie had made all of us girls each a Gumdrop Cake.  Bottom left is Suzanne, Paula, A. Gladys, Jo-Anne, and bottom right is Viola and Peggy.  Lots of memories of growing up together in Southampton.  Really I don't know what happened to Auntie many years ago, as she left Southampton to cross the tracks to marry that Port Elgin Eby guy, who happens to now be my Uncle (hehehe). 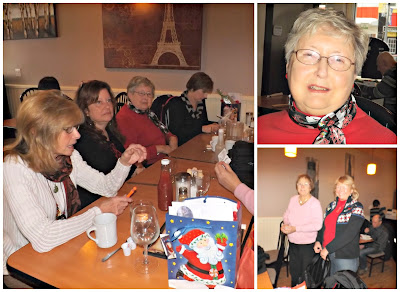 After lunch Vi and Auntie had to leave to ready themselves that afternoon for the Potluck Dinner.  The rest of us girls did up the Shops & Stores downtown Wiarton, Rankin River Trading Co., The Cluttered Cupboard, Josie's of Wiarton and Gilbert's Shoe Store.  All favourites of all of us.  Some of the giftware pictured to the left in Rankin River Trading Co., and to the right Jo-Anne offering Suzanne some of those fantastic Black Balls we all used to get at Tommy's Candy Store Downtown Southampton so many years ago ... I think that is where half my Church collection when to after Sunday School some Sundays, Shhh, don't tell MOM ! 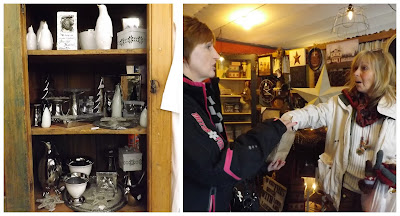 It was well after three o'clock when my Niece, Jo-Anne, had dropped me back home.  When Rob arrived home shortly after he had been thrilled ...


... as Auntie had spoiled him again, this time with his favourite Hickory Farms Honey Pineapple Mustard that she had gotten him a previous year (that he never forgot when he finished it).  He got TWO this Year, happy happy Crabby Cabbie, Rob !!  Below all the lovely things I had gotten gifted to me.  The Candy Jar with the Snowman to the left was hand--painted by my Cousin Vi. 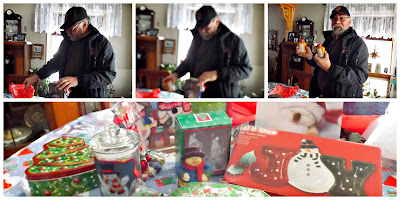 Last night the dreaded Migraine had its grip on me, so my bedtime was early, very early at 6 pm.  This morning I arose with the Migraine.  Still there were things that needed done.


I have been been getting back into the routine of making Rob Oatmeal and toast to start his day with, as it is something I feel he needs.  He got the tractor plugged in, as he was going to be unplugging our driveway at some point this day, while I got a couple loads of laundry done (cheap hydro day) and hung on the wooden clothes horses. 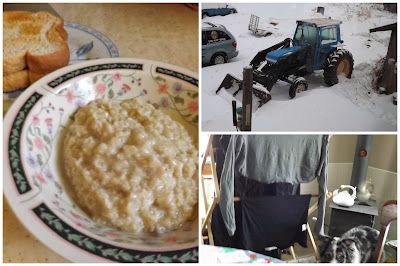 I check over and faxed off the payroll to our Bookkeeper this morning, while Rob when out to do a couple of calls.  The weather this day indeed was frightful, however from reports I had been hearing in other parts of Ontario, we were doing pretty good in comparison.

Late this afternoon Rob brought some wood up from the drive shed into the house.  I had been in bed the most part of the afternoon, not feeling too good that I was unable to help him with this, even though it is one piece at a time, it still would have been a bit of help. 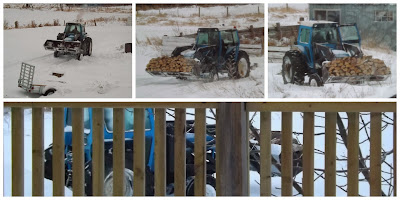 Rob was called back out around 5 pm, while I got our Dinner ready.


Simple again, 2 Sirloin burgers for Rob and a "bland" Turkey Burger for me. 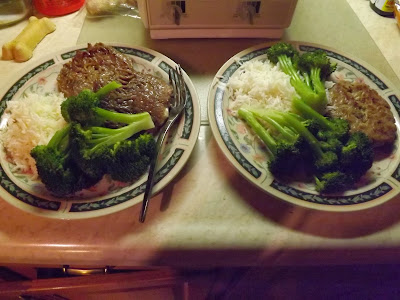 Truly I am getting tired of dry toast, cereal, and turkey burgers.  Tomorrow I will have to think about some chicken, mashed potatoes and turnip.

Christmas is just around the corner now, are you ready?  I am definitely ready with only my Mom's gifts to wrap which will not take me too long at all.  I also have to put a tin of Christmas Goodies together for my brother, Allan, and Mom.

We most certainly can not say Winter Solstice did not come in a flurry now can we?  I am hoping it passes for all the travelling that will be done on Christmas Day.

It will be another early evening here for both Rob and myself, with hopes of good weather tomorrow, and no  migraine to weaken the strong, "Just North of Wiarton & South of the Checkerboard".
Posted by Cindy@NorthofWiarton at 12/22/2013 07:05:00 pm