A Wonderful Day Away !

I was ever so tired, again, last night going to bed early and watching Iron Chef (I love the Food Network), finally falling asleep after 10 pm sometime.  I awoke thinking the alarm should be going off soon?  I got up to check the clock to realize it was only 2 am !!!  Really do you think I could get back to sleep after that? of course not.

The alarm clock finally did go off at 5:50, set just in case I really did sleep in ... ha !  Up I got to ready myself and out the door to pickup my neighbour, Pari  at 7:00 am.  We were headed South to New Dundee this day.

With a coffee stop and a washroom break on the way, we arrived at my BFF home before 10 am.  Bob had been waiting for us as I had contacted him the day before.  Now that he is officially "retired" he had the day set aside for our arrival.

Since I had missed his Retirement Party a couple of weeks ago due to nasty weather, I was able to deliver his gift to him, as well as a little Christmas gift for him and Tim.

Maple Syrup to keep him fuelled with "sweetness", along with a new pair of "socks" for him to begin his journey into retirement. 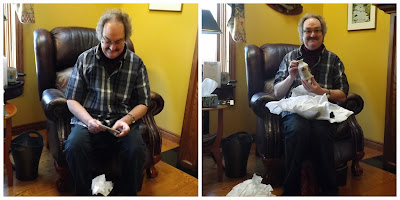 Bob gave Pari a little tour of his home, my Home Away from Home, and I even got to reminisce a bit with a photo taken on my Wedding Day to Rob.

Bob had stood up with me when I married Rob.  This was the photo we had of Bob and I together before I tied the Knot with my Rob. 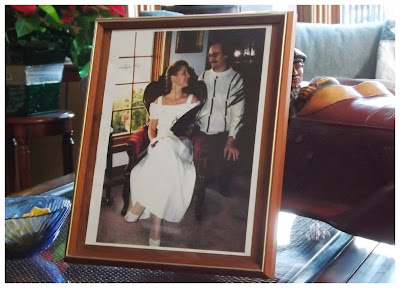 Bob took Pari and I into Kitchener for a shop, as I needed a few things, including a couple bags of Dog food for Bandit and Buddy.  It was not too crowded at Costco, but was a quick in and out as we had made plans to meet up with my Paul, and our Elizabeth to drop off the Christmas gifts before heading back home.

Driving back to New Dundee, Bob took us past the New Dundee Damn to show Pari how pretty the town Rob grow up in, and where he lives, is. 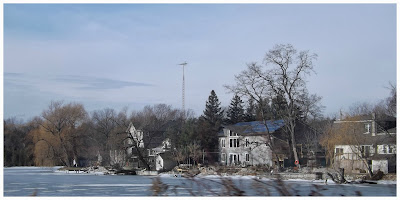 Once we went back to Bob's to pickup my Van, we then head off to meet Paul and Liz in New Hamburg for lunch.  By this time in the day it had been about 11:34 am.

On Bob's recommendation, and Liz's choice, we went to Meme's Cafe located downtown New Hamburg.  A cute down to Earth Bistro type cafe it is. 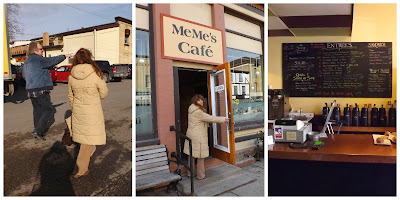 
... they had not been long to follow after.  Yes there is my son's "look" that says, "oh Mom, stop with the camera will ya!"  When our food arrived he was quick to grab Liz's lunch away from her to display it for me to photo.... he really is a little "smart *ss", he is.  The food was very enjoyable, however the Latte Pari had ordered was cold, and the Earl Grey Tea I had left an unusual bitter taste in my mouth.  Overall, other then the beverages, I would certainly go back to Meme's Cafe in New Hamburg, as I really did enjoy the Spinach, Feta & Red Onion Quiche with their House Feta Salad, and the wraps with salad were also enjoyed, as was the Beef Teriyaki dish Bob had ordered. 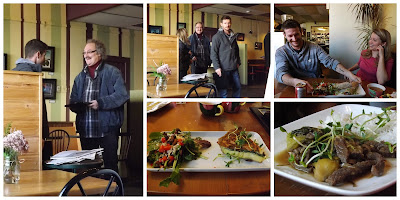 Once lunch was over with we headed over to Paul and Liz's home.


Paul unloaded this huge filled (heavy I might add) box I had put together as a Family Christmas box for the seven of them.  That is right all "7" of them, being Elizabeth, Paul, Josh, Aiden, Chloe, Briar and Connor (in order of age).  The Curious George's had also been delivered but just as "fun" for the kids, and not as a gift. 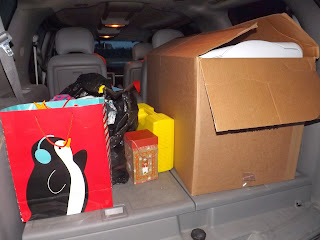 We truly did have a nice visit with Bob, Paul and Elizabeth, but had to get leaving by 2:30 pm as I really do not care for driving after dark any more, or much ever for that matter.


Thanks Elizabeth for taking a photo of my friend, Pari, and I, as I enjoyed having her company all day, and she enjoyed going to places she had never been before. 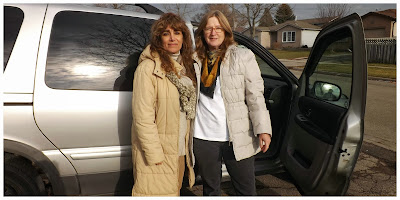 Off we went heading back Northbound.  I passed by Mapleton's Organic Ice Cream, which I have been doing so for the past 10 years without ever stopping in.  We decided to turn back around to check it out today.


The service was not only friendly but oh so delightful, and the Ice Cream? really quite a difference from "store bought" ice cream.   Pari was enjoying a favourite flavor of hers being Cappuccino, whilst I had a Chocolate Mint, that contained NO green artificial colouring.  As soon as we had first drove in we had been greeted by a beautiful, none other then, a one blue eyed Red Merle Australian Shepherd pup, that also delighted me. 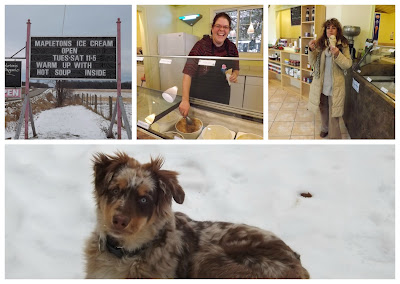 On our way towards home again the snow began South of Hanover, remaining very light until of course we arrived back in Wiarton.


Not only had it been dark when we arrived home, the snow was coming down pretty dang good with the roads becoming slippery.  At present there is a Freezing Rain Warning issued for our area, which I certainly hope does not happen as my Rob has to head out tomorrow morning on a call at 5 am down South way. 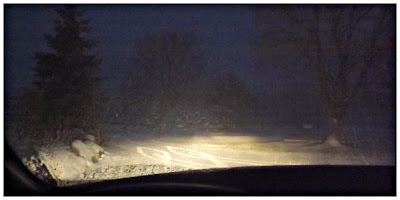 After getting all our Aussies needs looked after, and the purchases brought in, I was happy to find there was an awaiting email with a photo attached to it from Elizabeth.

Briar and Chloe had been THRILLED when they had seen the Curious Georges !  Upon a phone call to Liz, they had been trying on outfit after outfit from their clothes up in their bedroom.  Oh my ... wait until Aiden and Connor see them too, as being boys I am sure there will be more wrestling with the Georges rather then "dress up".  It is so nice to know the kids are having fun times. 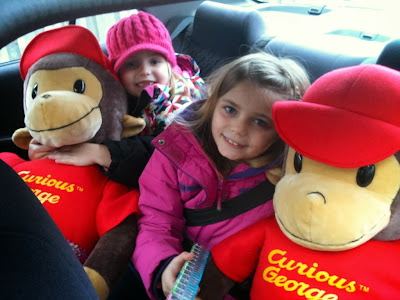 Oh yes, Paul and Liz gave me a beautiful photograph of the seven (7) of them that they recently had taken.  I will "post" a photo of the photo hopefully if I remember tomorrow.  Truly we are blessed to have all seven of them in our lives.