Another Wiarton Wednesday And ...

Last night found me exhausted this morning as I felt as I had barely slept a wink at all.  Pain was searing through my neck and other parts of my body.  I really can't remember me feeling this badly for some time, which is a good thing.

Poor Rob had a call at 3 am from the OPP for him to go pickup some people over by Oliphant, so I am certain with his sleep disrupted he was feeling pretty tired too.  What a pair we make some days ... good thing we have each other, this I am thankful most always.

Apparently last evening was another Blue Moon.  Not have a high tech camera as some of my friends do, I was still able to capture a glimpse of it this early morning before it got started.

This morning I headed up to Hope Baby to pickup these two lovely young girls who were having themselves an adventure by hiking the Bruce Trail from Wiarton to Tobermory.  They were have a break in the trail by having The Crabby Cabbie drive them from Hope Bay to Lion's Head where they would take up the trail again.  They were doing it as a project through the London YMCA Youth group. 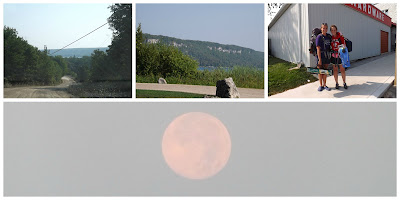 When I returned from Lion's Head I had to get going on still more Crabby Cabbie stuff.  Really can I believe it ?????  Finally with that accomplished I managed to get a sink full of dishes washed up and my bed made.   All that was getting done around here today !!!

Heading down to meet Rob in Southampton was the next thing on my Agenda for my afternoon.

As I was about to pull out this little guy caught my eye.  The little fledgling that had been just out of the nest yesterday was hip hopping all around lickety split.  Way too cute. 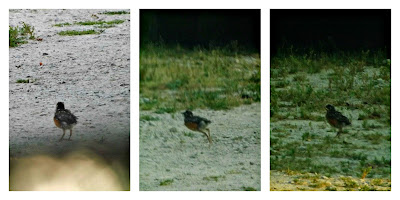 When I finally arrived in Southampton Rob treated me to nice cold Fruit Smoothie at the Tim Hortons.  I had a Tangerine Mango I believe.  A little bit on the too sweet side for me, but now I have tried one and know.  Yes my poor tired Crabby Cabbie going over the paperwork I had brought down to him.  It had to be dealt with this day. 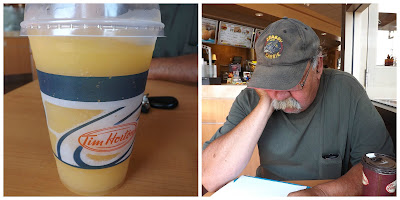 I left him behind as I headed back home again for about the 4th time this day.  When I got home our new Wiarton Driver, Jeff, had been in our driveway under a shade tree.  I had barely said "hello" to him when we had received a call from the Hospital to do a run.  I went along for the ride to show him the paperwork. Once done he dropped me back at home and went on his way, I had some Aussie time, then sat on my kester for a bit as it had been too hot to do anything butt but.  No pun intended .. *smile*.

Finally my Crabby Cabbie Rob arrived home.  Too hot to cook anything I thought I had better use up the leftover chicken I had in the fridge.  I decided to cook up some bacon and make him a Toasted Chicken Club Sandwich with Potato/Egg Salad on the side. 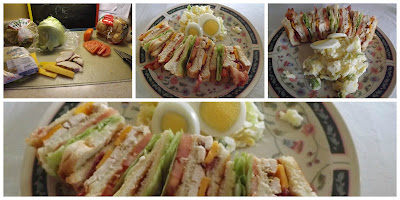 With dinner done and out of the way it had been after 7 pm by this time.  I had to run downtown if I was to take in the Entertainment for Wiarton Wednesday, especially since I knew some of the entertainers. 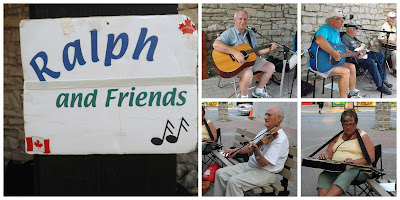 ... and Bob Corp were the people I knew, other then Lyle's daughter on Guitar.  It was a good night and they brought out lots of people who enjoyed their Old Time Country Tunes. 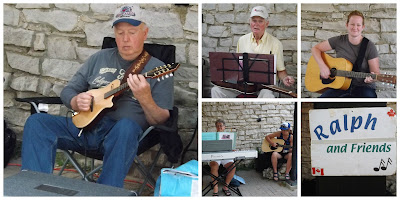 Before I knew it, it was 8 pm and time for Ralph & Friends to pack up.  I had to drop around to see my friend, then head it home to look after all the Aussies for the last time this evening.