Who Left The Door Open?

"Who left the door open" letting Winter back in ???


"This was about 7:00 am this morning.  There was no problem convincing Bandit or Lexus to come back into the house, nor Buddy when I took him out and back in.  However Missy Mercedes had been another matter as she wanted to play, play, play in all that fabulous snow." 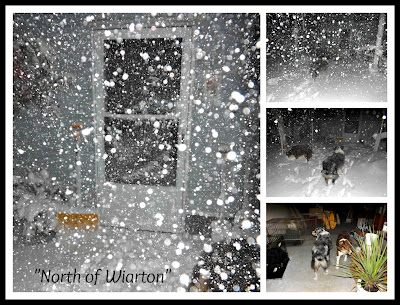 Not only had it been a challenge out in the wind and snow this morning, I had awoke to no hydro.  There had been some groping for a flashlight and candles.  It is times like this which validates how much I love the fact that we heat our home with a wood stove; especially when a pot of water went on top of it to heat water for my coffee.  The day might not have started off not too good without the required amount of caffeine in my system.  A wood stove is a "life saver" when one finds themselves without hydro or a super duper honking generator.

Generator? a great idea for backup.  Do we have one? of course we do.  It is really nice and looks just lovely still in the box it was purchased in.  *Sigh*  Time? did I ever mention what a precious commodity that is around here?  Rob has had no time to crack it from its box to put the required amount of oil and fuel in it for such times.

What does a person resort to when there is no hydro and it is storming outside?  Think wayyyyyy back in the "good old days" when we had to survive without Cell phones, data plans, or Internet .... 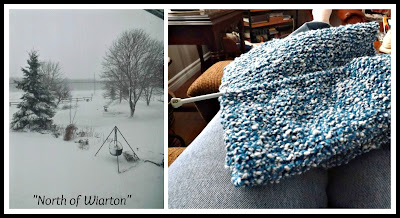 I was happy when the hydro resumed at 9:00 am, as my neck couldn't take much more knitting, or my arms by trying to adjust myself so my head was not too tilted.  I love knitting, I loved crocheting, I love reading ... jeez it really is the pits some days when I think of the hours I used to spend at all those things I had enjoyed doing at one time.  Oh well, it is nice I now have a laptop and a recliner where I can set myself somewhat up ergonomically compute, as I do LOVE me some computing.

Around 10 am, or shortly after, the sun made an attempt to shine through the heavy cloud cover.


"Other then a few attempts by the Sun, it was pretty bleak with snow squalls mustering themselves up to block any view between the house for as far as a crow flies." 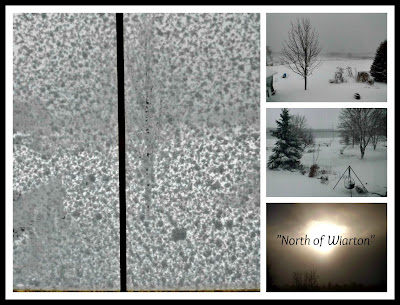 We took advantage of a break in squalls to head downtown Wiarton to do a couple errands and purchase some bread at our local Foodland store.


"Following behind a Snowplow pretty much ensures the fact any drifts have been removed before you get to them.  Every side street we turned down in town had someone out and about blowing out their driveway; no surprise there." 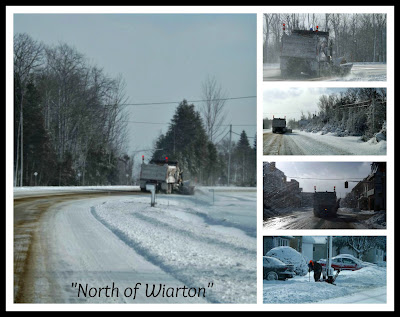 Once we returned home not too much was accomplished this day as both Rob and I were bone tired, and for some reason I am certain I could come with an educated as to why we were.  I did manage to get a load of laundry done and hung on the clothes horse in front of the wood stove, as well as a sink full of dishes washed up.

Late this afternoon Rob and I thought we would go out into the elements again ....


"The gate was "sprung".  Watch out here he comes !  With lots of snow and not too much traffic going by on the Highway, Rob and I took Buddy out for a big run late this afternoon.  Run he sure did.  Run, run, run .... " 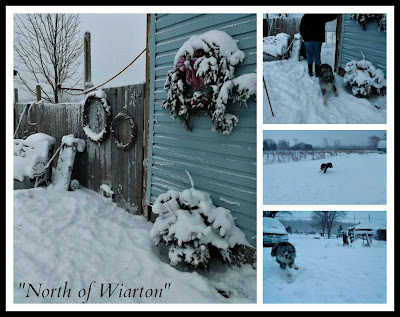 "What a pretty pretty boy our "Buddy" boy is.  A one point Rob had him twirling circles for a treat." 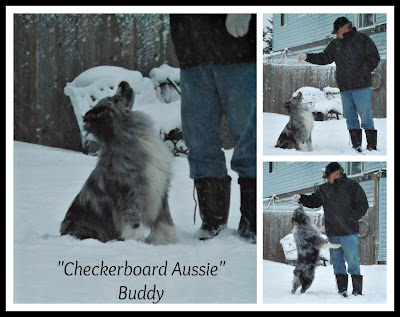 "I got lots of *smiles* from our Buddy boy." 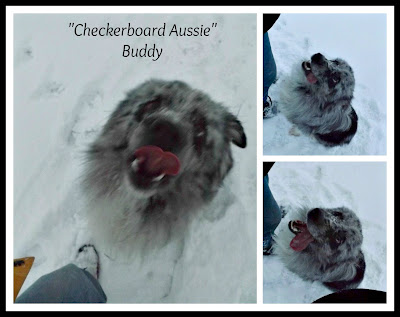 After our romp outside, I might add how cold it had become as well, we got in as I had to get the potatoes and veggies prepared for our Sunday Dinner of ....


"Roasted Chicken from start to finish.  Lightly sprinkled with Mrs. Dash Herb & Garlic and roasted from frozen in a moderate 350* oven for 4 hours until it had reach its peak of perfect doneness." 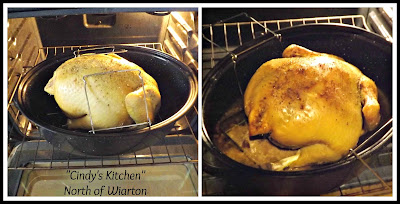 Dinner was good, no dessert needed.  I am not only tired, now I am full and tired.

That is all she wrote for another day, "Just North of Wiarton & South of the Checkerboard".