Not A Pretty Sight

Everyone has a "bad" day every once in awhile.  If they don't I really would think they are telling a pretty huge "fiblbet".  Some of us have bad days, with some absolutely "horrendous" ones.  I just had a day that was "bad, bad, bad" ... but far from "horrendous", so that couldn't be too bad now, could it?


"It was bad enough I wanted to be permanently "Out of Order" for part of this day." 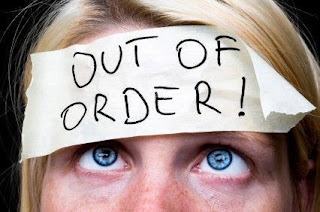 This morning went along pretty good with the usual routine with the "Checkerboard Aussies" and myself.  Then a bit of cleaning of this and that until just before the noon hour my dear sweet Rob got up for the day.

I have been waiting to finish up The "Crabby Cabbie" book work, it being the last quarter end of the Year and whatnot, however I had some questions needing  Rob to clarify a few things for me ..... trust me it was "not a pretty sight".

Have you ever had one of those days when nothing you say to each other is communicated to the other the way you want to be? of course you have.  Black should be White, but they think not.  With both of us not feeling well, with fatigue and headaches, along with the usual aches and pains ....


"... and the "stuff" needing dealt with still there to deal with until it gets dealt with." 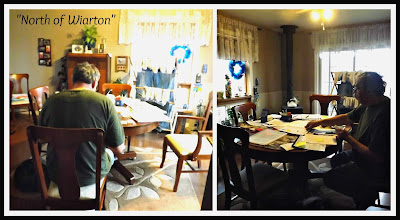 We settled the grey areas between the black and white, finally getting the task at hand done, even though it was over 3 hours later.  *Sigh* have I ever mentioned before that I hate doing book work?  more then likely I am sure.

Oh did it get better?  NO ... the beautiful supper I had planned on didn't turn out the way I had wanted.  Nor did the Artisan Bread I had planned on trying to make, that my Blogger friend, Debby, had made with success, did not even get past a thought.

Oh man it felt like I was on a mini "bad" roller coaster ride this day.

I still managed to have a couple *smiles*.  Usually one, or another, of our "Checkerboard Aussies" put a smile or two or many more on my face every day at some point, usually regardless of how I have been feeling or how bad the day has gone.


"Buddy enjoyed himself one of the Ciabatta Buns that had gone "off" before their Best Before Day.  He was in his glory with that big chewy bun, putting a *smile* on his face." 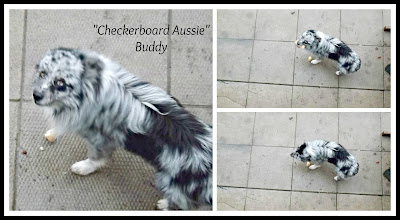 Then the creation one of the members on Cindy's Recipe Exchange made today put a *smile* on my face when she posted the Homemade Pizza, using a Dough "from scratch" recipe another member had submitted to the Exchange.  We have such a nice little community of people in the recipe exchange, how could that not make me *smile*.


"Oh how I wished I had lived closer to Kathy this day so I could "share" with her this awesome looking Homemade Pizza she had made.  Isn't is colourful and yummy looking? "

Just look at all those sweet little faces .... 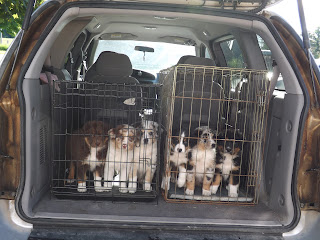 The "Checkerboard Aussies" are expecting their 2013 Litter of amazing Australian Shepherd puppies on or about the 6th of February 2012. Contact us to Reserve yours now. Fully socialized, vet checked, shots and deworming x4 at $550.00 each. (deposit required).

We are are on FACEBOOK at https://www.facebook.com/pages/The-Checkerboard-Aussies/391795127565803, as well as having our own Blog at http://checkerboardaussies.blogspot.ca/

Puppy PHOTO is of our 2012 Checkerboard Aussie Litter

I don't know about anyone else, but if we didn't have the parents of all those little sweeties, I sure would be "sold" on one after seeing and reading this advertisement.

From left to right, Jake, Scout, Injaca, Cash, Fraff and Myles.  The "Spectacular Six" !!! do I know our pups, or what?

A big welcome to Christy who has joined along with the other 19 of us in the 52 Week Money Making Challenge, you might have noticed on the side bar of my blog.  We are now 20 strong who are taking this Challenge together !!!

I am also pretty excited that there are about nine Ontario Bloggers that have shown an interest in being "linked" up here for an Ontario Bloggers Day post !!!  Should you be an Ontario Blogger, please Email me at justnorthofwiarton@live.ca to let me know should you like to be "on board" with this too.  Also any SHOUT OUTS on your blogs pointing others in this direction would be appreciated.  Hopefully we will have just a few more to make this a great "link" up and a regular upcoming event.

I am tired, still with a headache, thinking I am going to make it another early night here, to look forward to a better day tomorrow.  On a big "P" for POSITIVE that is making me positively happy at the moment, that dang, dang, triple dang "Crabby Cabbie" book work is done for the time being, "Just North of Wiarton & South of the Checkerboard".
Posted by Cindy@NorthofWiarton at 1/13/2013 08:26:00 pm