My Cousin Vi emailed me this Survival Kit just after New Year's Day.  Since I love sharing, trying to as often as I can,  thought maybe you out there could also use a Survival Kit too.

I had to share something nice as really my day wasn't that exciting whatsoever ....

I was pretty proud of myself yesterday of sticking pretty much to the list I had been making the past Year for when I went next to a Costco Store, yesterday being that day.

"Rice, Freezer and Sandwich Bags, Canola Oil, Parchment Paper, Pure Vanilla, Corn Starch, Socks, Razors, Batteries, Lint Rollers and Vitamin D had been on my list.  Neutrogena had not been on my list, or the bag of Ciabatta Buns Rob had picked up, however there was Black Pepper and one other item on my list that I never got, so I consider it evened up.  Grand Total was $173.43.  What I do know, I will not have to buy most of this stuff for some time, with the exception of a couple items, I am probably good for another 1 1/2 or 2 years.

Outside the many times I go with our "Checkerboard Aussies", today wasn't one of the greatest.  As my friend, Cathy, had said on her Facebook Status, what kind of footwear should she be wearing out today on her walk, Winter boots, Rain Boots, or Skates?  Ha Cathy I could not have agreed with you more as my driveway was quite the challenge for me even with my winter boots on, as I almost fell flat on my behind a few times.

Lexus and Bandit were in their glory, as they LOVE ice in any shape or form.

"Really how I missed Lexus carrying a huge chunk of ice into her kennel was beyond me.  I did get a little grin out of her, probably in satisfaction that she had pulled the "ice" over my eyes." 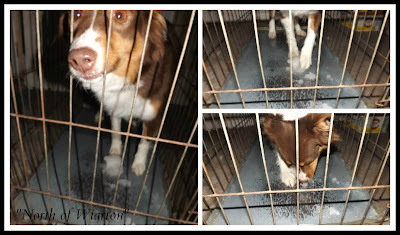 Pssst ... if you didn't already know we are expecting puppies on or about the 6th of February, and The "Checkerboard Aussies" have had their very own Blog for the past few weeks.  You are more then welcome to check it out by *clicking* HERE.  They even have five of their very own followers who have "joined" them there !

Trying not to fall on my butt on the ice was probably the most excitement I really had all day, as most of my day was spent finally tackling more "Crabby Cabbie" book work.

"Two months down and one more to go, along with a few phone calls that had also to be made today ... boring !   Dinner wasn't so boring but was rather Easy Peasy as 1-2-3 to make.  Chicken and Rice in one dish cooked in the Oven.  Rob loves this Dinner." 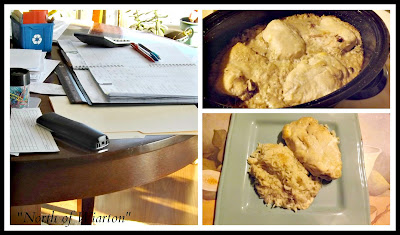 That was just the kind of day I had here.  I can't wait until Rob gets home as I am thinking I would LOVE to have myself a Candy Kiss from him, "Just North of Wiarton & South of the Checkerboard."
Posted by Cindy@NorthofWiarton at 1/09/2013 08:53:00 pm