One o'clock am the phone rings awakening me, the bedroom light goes on, my "Crabby Cabbie" bundles up before heading out the door on a "run".  Sleep eludes me.  He arrives home at 3:00 with a decaffeinated Tim Hortons coffee for me.

Four o'clock am an almost lull takes hold with the alarm sounding off just before six am.  I gave up and got up again.  My "Crabby Cabbie" out the door to continue on with is day, and I bundled up just before 7 am to head out in an extremely cold morning.

"With Rob gone out the door I had to take photos of myself modeling the Cowl I had been gifted after Christmas.  Is it not lovely?  Thanks Sharon, my Fort Myers friend who I am sure is much warmer then I here." 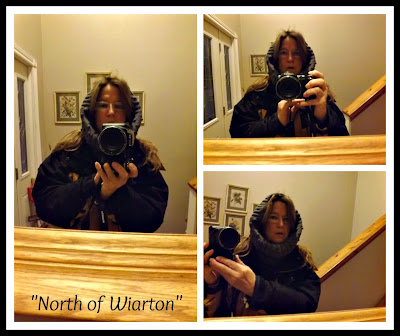 The morning was a total "write off" as I could barely keep my eyes open to have a coffee, or to even lift it for that matter as my body was feeling pretty much like a "dead weight".  Just as well the snow storm continued outside our doors, as the original day's plans had been cancelled, but would not have been that great with not much sleep anyhow.

I tried to lay down around 10 am, but would sleep come? of course not.  I finally gave up to get up to look at the mess around me that was suppose to be started on yesterday.  Those plans had been changed too.  Forever changing ... I really wish I would accept things don't always go as planned. I know it, but I have to "chew" about it within my  being before putting it behind and get on with further planning.

Yesterday there had been some pretty cool mail waiting for me to retrieve from our Mailbox.


"A Postcard from Osaka, Japan,  one from Holland, NL, and a third from Wisconsin, US.  They obviously read my Postcrossing profile to know I LOVE food." 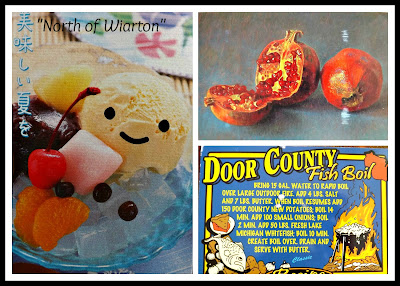 I do enjoy receiving Postcards from all over the World from people.  Postcrossing is an easy and fun way to get to know the World through Postcards.

Yesterday I had dropped around to my friend, Lynn's to pickup an invitation.  This Wiarton Willie Festival 2013, I am really looking to attending this event again ....


"You are invited to Wiarton Willie's 16th Annual Fancy Tea at The Salvation Army @ 576 Edward Street, Wiarton, ON." 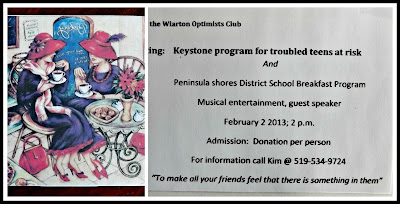 Mark your calender, as really you can tell what a lovely time I had last year at the Fancy Tea by going HERE.

The squalls had finely let up sometime after the noon hour with the Sun making an appearance.

"Do not be fooled into thinking the Sun brought any warmth along with it as brr....says it all." 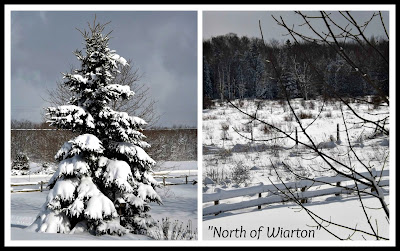 I really had a difficult time getting my "act" together today.  Regardless I had a "push" as today was the last day I had to get the week three challenges completed that I had signed up for over at Carla's, My 1/2 Dozen Daily.

Decluttering Challenge: Choose a closet, any closet, and clean it out!! Pick 2 closets if you're feeling really energetic & determined!! Take before & after photos so you can awe & inspire everyone else participating in my challenges as well! ;) lol!
Financial Challenge: Give. Find a way in your budget to "give" financially somehow... It doesn't have to be grand, you don't have to go hungry. I just want you to go that 'extra mile' for someone else. Buy a coffee for the person in line behind you at the coffee shop, hand a $5.00 bill to a homeless person on the way to work, throw a little extra into the collection plate at church, toss your change into the charity box in front of the register at the grocery store, etc... simply give.
"This was the state of things last week when I cleared out the bathroom closet.  It had remained like this until this afternoon." 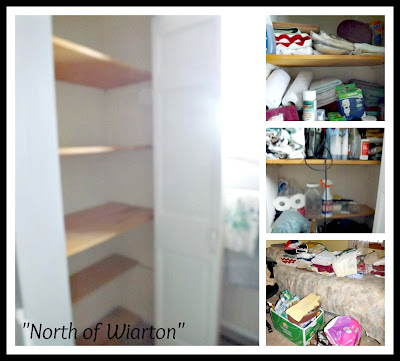 "After first washing down the inside and outside of the closet, I then went through everything that had came out of it ending up with what was being kept placed back into the closet nice and neat as below." 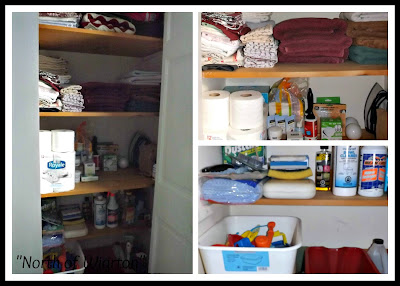 "This is all the clutter we have no longer any use for.  Lots of rags in these two piles.  I did hold back a couple towels for the beach when the Grandboys are visiting and some for when one of the "Checkerboard Aussies" might be in need of a bath or wipe down." 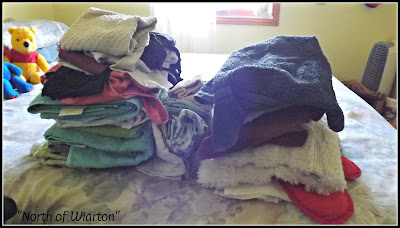 The giving back to the Community was put into the time spent on rolling the Pennies my "Crabby Cabbie" had collected in the VON Piggy.  This was the second part of the third week's challenge completed.

Once the closet was done I made sure each on of the "pack's" needs had been attended to before I hopped into a nice hot shower before starting our Dinner of Homemade Chicken Soup.  Rob requested the soup along with Grilled Cheese sandwiches.  I was happy to make both as they were easy to do so, and besides what better dinner then that on a cold Winter night.


"How could something made from "scratch" from the homemade chicken broth on down the line to chopped fresh veggies and a homegrown chicken be anything but GOOD ! " 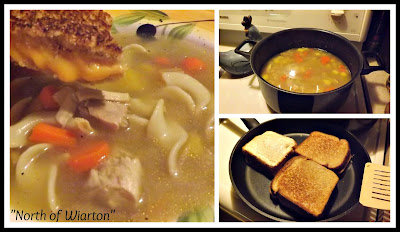 It is still freezing outside our doors, and I still have to go out and about with all four of our "Checkerboard Aussies" yet tonight.  Brrr.....wish me luck as I head away from the warmth of the woodstove out into the deep freeze, "Just North of Wiarton & South of the Checkerboard".
Posted by Cindy@NorthofWiarton at 1/22/2013 07:47:00 pm