Not too much excitement around here other then the normal same old, same old with our "pack", the "Crabby Cabbie" and myself today.

The very first thing I had to do this morning, first after having little Missy Mercedes out pronto, was go out along with Bandit and Lexus to get me some kindling as it was a little bit on the "chilly" side this morning in our house ... 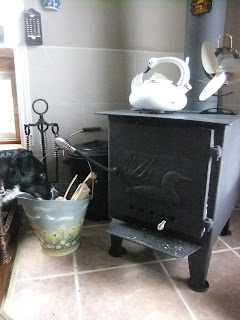 I made another deal on one of the local Swap & Sell Facebook pages bringing me in a few more bucks then I had before.  This kept me a little bit busy this morning as I had met the person part way for the delivery of the goods.


"I am certain I had only used this set of dishes maybe a couple of times in the 20 years I owned them, so the $30.00 I received for them today was a pretty good "price" in my eyes.  I really did love the pattern though, however not enough to use them more then I did, so a sweet "goodbye" it was." 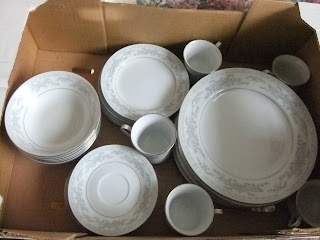 It was just before the Dinner hour that I returned home to find my "Crabby Cabbie" was wide awake, and not too "crabby" at all ..... lol.  Since he wasn't too "crabby" I decided I would fix us up some Dinner.
"I need to make up some Homemade Soup, as our freezer stash has been used up, so today's Dinner was a toasted Tuna Salad Sandwich along with a side of Caesar Salad." 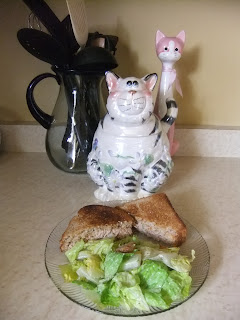 It was "simply" nice to have a luncheon for the Dinner hour today.  I hadn't had a Tuna Salad for oh so long, although not one of Rob's favorites, I enjoyed it for a change.
The "pile" of "chicken feed" change that Rob had brought in from his "Crabby Cabbie" vehicle the other day, along with what we had been stashing away in our "Piglet" since September or so, took some time between the two of us to get it all rolled up this afternoon.
"It doesn't take long for "Chicken Feed" & a "Piggy Belly" to add up, as we scored a whole $107.50 !!!  A bit more to go towards the "Some Day Year" Vacation Fund.  A little bit was leftover and put back into the "Piggy Belly" to keep it fed and off to a new start." 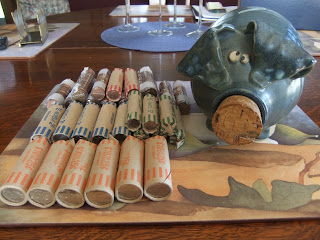 "The Tomato Plant I had been "gifted" last Monday, actually has a flower on it now.  Whoohoo ... we might have "fresh" tomatoes before we know it !  Yummy !  Can't get any fresher or more local then this, now can it?" 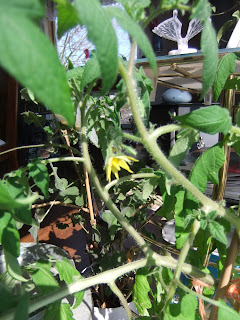 Speaking of local and fresh, I received an email from Foodlink Grey Bruce just the other day, inquiring if they could use some photos from my "blog".  I called and spoke to the author of the email to find out the photos she would like to use were those I had taken last Fall of Anita & Brian Dejong's Farm, HERE, since the Dejong Farm is going to be listed on Foodlink Grey Bruce.
Maria of Foodlink and I got to chatting a bit, with her telling me they don't have too many photos yet of Farms, produce, etc ... since I LOVE promoting LOCAL, I told her I was more then happy to oblige as long as I was credited for the photos.
Here are a few of my favorites from last year I had forwarded on to Maria at Foodlink Grey Bruce:
"The "Checkerboard Aussies" of course."

"Hay being baled on our fields"

"Who wouldn't love the antics of the "chickens"?"

"The beauty of our Mares in the early morning mist." 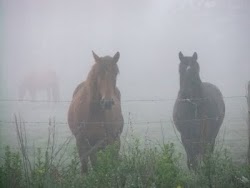 "Nothing like fresh Ontario grown Leeks right from our garden." 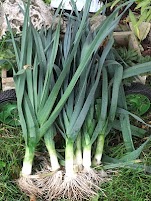 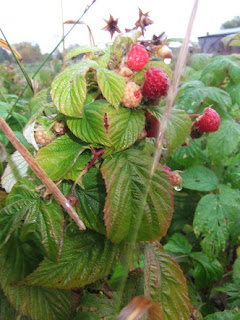 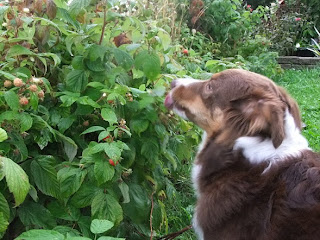 "How much better does it get when everything on your Dinner plate is Home grown by one's self."
"... and most of it all came from here."

Looking for Local food in Grey Bruce Counties?  Go to Foodlink Grey Bruce, as they will link you up to Farmer's Markets, local Farmers, and everything food, fresh & local  ...so check it out at the following link:
http://www.foodlinkgreybruce.com/
I love local and I love local Farmers !!!  It doesn't get much better then coming from your own "Backyard", now does it ???
Today there was more evidence of us heading into Spring more each day ....
"The "Blanket of Snow" is just beginning to bloom." 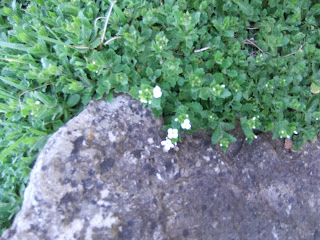 "Daffodils coming out in between the Lupins which have begun to awaken." 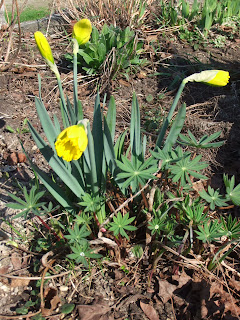 "Evidence of chives coming through the Maple leaves of a Fall now long past." 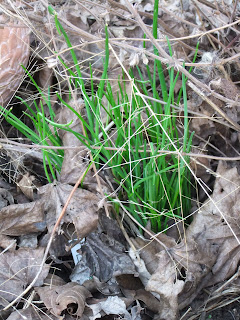 New life is slowing awakening from a long Winters sleep.   I can hardly wait for the sleepiness to be long behind with the full warmth of Spring/Summer to be infused into the Earth bringing forth all of its goodness.
I think I am pretty much ready to call it a "day" here now, until my next adventure in the morrow, "Just North of Wiarton & South of the Checkerboard"
Posted by Cindy@NorthofWiarton at 3/24/2012 09:05:00 pm