Hello First Day Of Spring So Nice You Have Arrived

Hello Spring, I am totally thrilled to see you and the wonderful warmth you brought along with you this day .... happy, happy, happy !


This morning was pretty much tied up with Rob's annual physical at our Doctor's this morning.  Men can be so "dang" stubborn about such things at times ... can you not, Honey?  After this was all over with we left Lion's Head to drop off prescriptions at the Drug Store in Wiarton.

All was not lost since we had time to put in before the prescriptions were filled, we took a jaunt up to Wiarton Decor where we found a great buy on a carpet for the spare bedroom we are re-doing.  We also had to stop into our bank while downtown, where I learned that some of Bruce Peninsula's Royal Bank gals are doing a "fund raiser" Dance for a Cure. 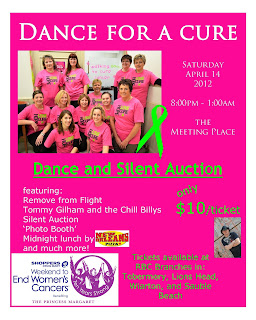 "When we finally arrived back home we managed to get the furniture from the spare bedroom moved over into the other spare bedroom.   Rob also got the old carpet lifted and taken outside.  He then finished prepping the walls for painting.  Later in the day the old baseboard heater was removed too, since we did have a new High Efficiency Propane Furnace installed 3 years ago, so why leave it in there." 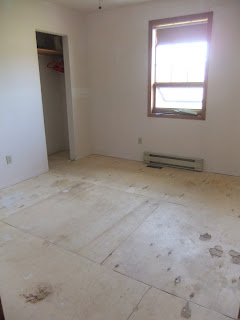 Since we didn't have the paint chip for the colour we had picked, we will be heading back downtown tomorrow to pick up the paint since Rob said it was a "go" for paint.  Progress man, there has been progress made !!!!
Another wonderful barbecued Supper tonight ... I so love warm Spring weather, bringing with it Barbecue Season !
"Barbecued boneless skinless chicken breast with a side of Black Bean & Feta Salad.  Yummy, two of my favorites." 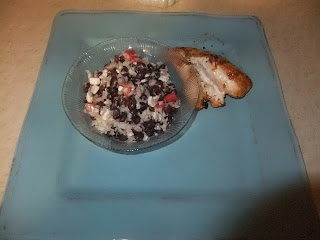 With the weather still so nice after supper was over, Rob and I went for an evening walk down by Bluewater Park in Wiaton.
"It won't be long now until these boats will be going into their appointed slips." 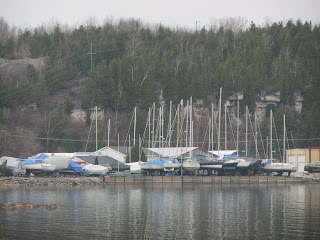 "Spring Fishing isn't far off now with the Salmon soon starting to run, then this dock will be a happening spot." 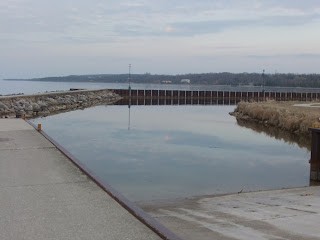 "This is the old train station that is now set up for Tourist Information.  The Wiarton Farmer's Market is also at this same location in the Summer months." 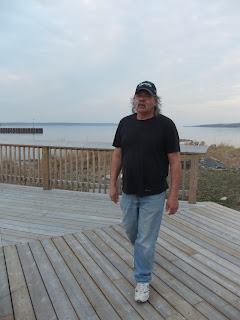 "We were just heading back to our vehicle when Wiarton's Volunteer Fire Department began pulling in." 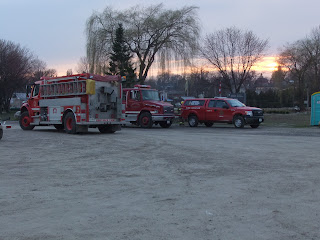 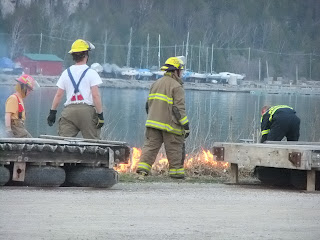 "They started the brush along the Bay shore on fire.  Rob said it was a "controlled fire" to practice on.  Believe it or not, I was actually too shy to go over and ask one of them ... lol.  Can you believe I was actually having a "shy" moment?" 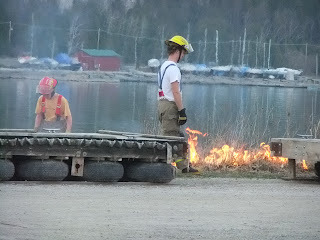 "Today Rob and I also picked up the required order forms for chickens.  If I missed asking any family or friends in close proximity should they like to order any Home Grown Chickens from us for this Fall, sorry as it wouldn't have been on purpose.  Please email me at justnorthofwiarton@live.ca should you like to place an order to be filled this September 2012.  Thanks in advance !" 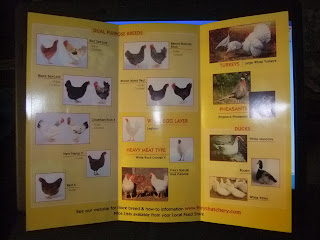 Here it is almost 9 pm, with me not too far off from my bed and supper dishes still needing to be done, "Just North of Wiarton & South of the Checkerboard".
Posted by Cindy@NorthofWiarton at 3/20/2012 08:50:00 pm