An "Goose Chase" Adventure In Ontario It Was

"It was still pretty dark just after 6 am this morning when we headed out to see about another "Crabby Cabbie" vehicle Rob was interested in 3 1/2 hours down country from us." 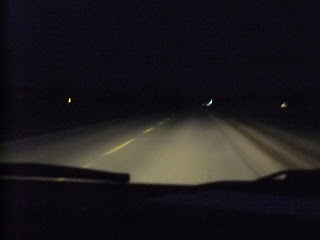 "I thought I would bring along the almost three page "speech" I had prepared for myself to practice, as I have been asked to speak in front of a group of people this week.  More about this later, as it is even too scary to speak about yet ... lol.  Needless to say taking in all the scenery along the way & chilling with Rob, I only read it out loud once." 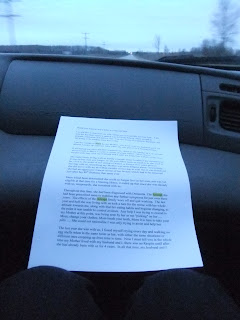 "We made our way winding through the Village of Neustat.  Quite a quaint little village by the way, which boasts the oldest operating original brewery building in Ontario, The Neustat Springs Brewery." 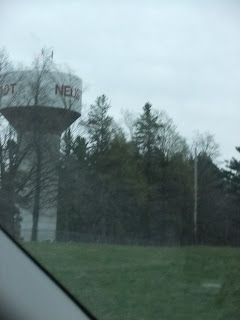 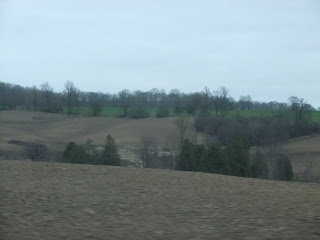 "This little Hobby Farm along the way has quite the collection of old tyme tractors." 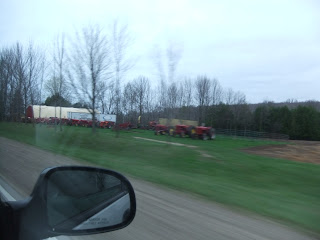 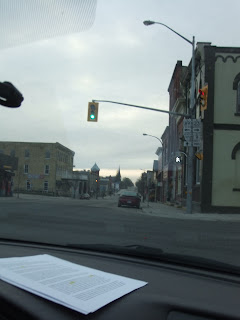 "On a by-pass route of Listowel, we came upon this wonderful chainsaw carving, which I eventually found out was created by one of Bruce County's very own artists, Bobbi Switzer.   I absolutely love Bobbi's creations I always have access to in and around Wiarton, but to come across one while on the road?  How cool was that?" 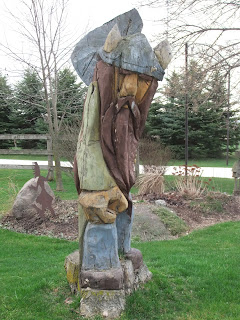 "This is where I happened upon Bobbi's work, not by choice, however by chance, as this is where we lost a pin out of the Dolly behind our van, where the gentleman that resides here came to our assistance.  Oh it was pretty scary by the way, as I was driving, and the dolly was only being held on by the safety chains once the pin let go.  Supposing people shouldn't be pulling any type of trailer without safety chains, since I am proof they do work ! ... and oh man, so glad it happened on a back road !" 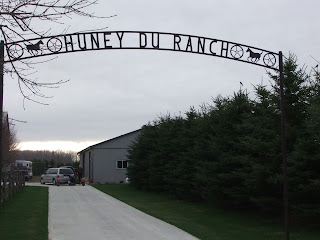 "It is so nice to know there are still "Good Samaritans" out there in this World, is it not?" 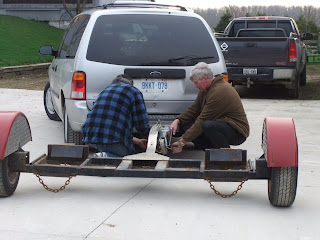 "All fixed up and on the road again.  Oh that was "Topping" we just passed through back there, hope ya didn't "blink" or ya would have missed it." 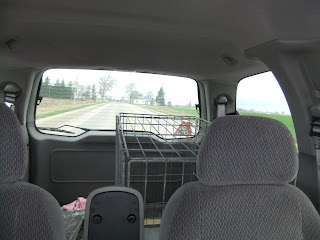 "Amulree, Ontario has a little more going for it then Topping does.  At least it is noticed a little bit more when you drive through there." 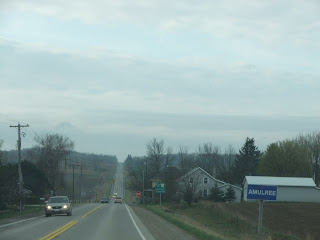 "After quite a few miles later we came to the crossroads in Shakesphere, Ontario.  There is a little quilting shop here in Shakesphere that we had taken Rob's Mother to shop on the odd occasion in days long past.  Shakesphere is also home to a handful of very quaint little Antique Shops, should you ever cross through there." 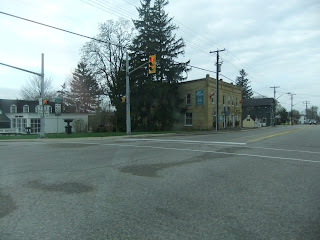 "More miles we went along straight aways, as well as winding roads." 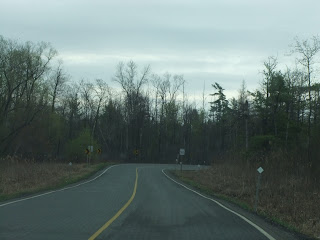 "We finally make it to our destination of Norwich, Ontario, where .... " 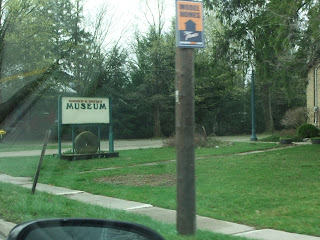 .... we had been on the road over 3 1/2 hours to find out the vehicle we were interested in purchasing had been sorely misrepresented.  We must have been in and out of there in 10 minutes flat.  There was damage the seller had not even thought to disclose to us, or just avoided telling us over the phone, which was plain in sight to the "human eye" .... not to mention if the vehicle had been in good repair, its insides were disgustingly "filthy".  A little dirt and gravel on the floor mats is very understandable, but complete "filth" when you are attempting to make a "sale" ????  NO SALE !!!!  ... but an Ontario "Goose Chase" we had ...or "Canadian Goose Chase", in Ontario, should I say?  LOL
"Homeward bound we headed." 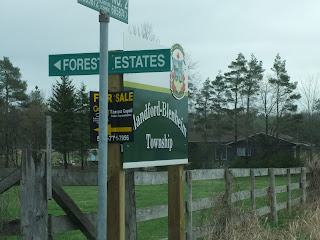 "We made our way through Tavistock, Ontario, more or less the outskirts, as we never did go through the main Business Secton of Town.  I did not know until now, when I "googled" Tavistock, that they hold the World Championship for Crokinole.  Wowsers !  Way to go Ray Beierling!!!" 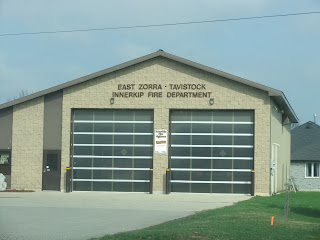 "Milverton, Ontario, the oldest and largest of 10 Amish settlements in Ontario, where we almost stopped for coffee, but opted to wait until the Tim Horton's in Listowel." 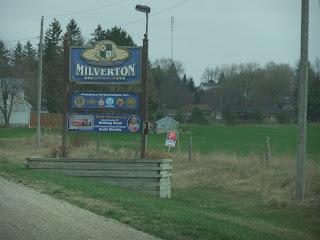 "Speaking of the Amish, here comes an Amish gentleman our way now.  My Rob grew up in a Mennonite home, with his parents and six children, including himself, however not the "Old Order Mennonite"." 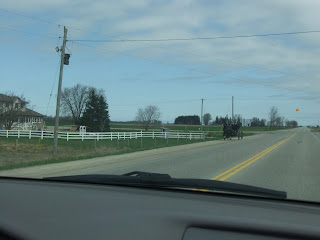 "Ahhhh, Listowel, there you are, and Timmies here we come !" 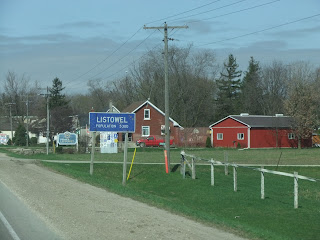 "Fordwich, Ontario, another quaint little village nestled in the Heart of Ontario." 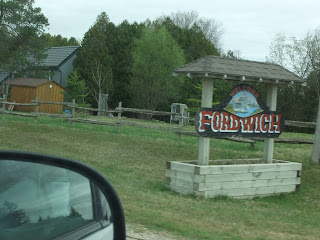 "With so many choices at this crossroad, it was a good thing we knew where we were going, or we could have gotten seriously lost at this point.  Not really, but that all sounded rather good, did it not?  LOL." 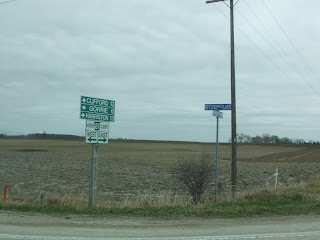 "From the last point, through Clifford, back through Neustat, Hanover, Elmwood (where my paternal Grandmother was born), Scone, and Hepworth, it was finally back home, "Just North of Wiarton & South of the Checkerboard"for us, with the "winds blowing and the willows weeping"." 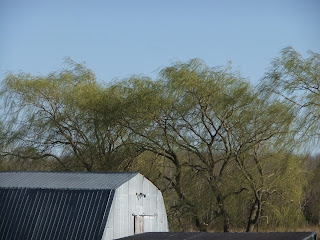 Holy cow, I just came back in momentarily from having little Missy Mercedes out, and we almost got blown away by the Northwest winds that have been building up memento since we arrived back home earlier when I had snapped the "Weeping Willow" photo.  Hold onto your hats Bruce County, I heard there is a "cold snap" arriving tomorrow, but by the feel of it, it is beginning to make its appearance already, whether it stays or not remains to be seen !
It is the day to do our March Eat Right Challenge updates, however Lena over at Frugal and Thankful, and myself are the only two out of five of us who have checked in today.  I am going to wait until tomorrow to post the updates to see if the other three gals report in by then (oh I hope I remember to do so this...lol, another Note to Self ).
It has been a very long and tiring day.  The upside to the whole day is Rob and I got to spend it together.  The poor guy had only a couple of hours sleep after taking his "Crabby Cabbie" off in the wee hours of this morn, so needless to say, he has been sleeping since we arrived back home.
Since I am feeling a little chilly at the moment with the wind feeling like it is going to come right through the house, I think I will "fire" up the woodstove to get the chills from out of my bones, "Just North of Wiarton & South of the Checkerboard".
Posted by Cindy@NorthofWiarton at 3/25/2012 07:43:00 pm