My day began in it's usual manner with Mercedes waking me up with a nudge to my hand from the side of our bed just after 6 am.  I am awake by then, but some days it is nice to just lay there and pretend I am not .... lol.

My "Crabby Cabbie" had returned in the "wee" hours of the morning, only to arise and leave early to do a "job" first thing for someone.  Poor guy will be pretty tired on his "watch" tonight, even though he had a really big catnap in-between coming back home and going back to work again.

I had some Tortillas to use up, so thought I would make the Layered Enchilada dish again, as Rob loves it, so I went to get the recipe out and ....


"... I am really looking forward when Debby over at Nanny's Place puts an "Organize All the Loose Recipes Challenge" into place that she had mentioned, as this was how my morning got going ... (but not in March, please, there is enough on my plate !  LOL)" 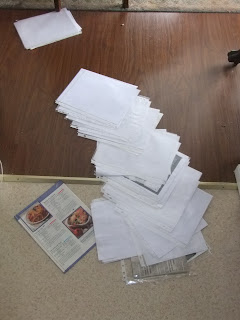 "It is not like I don't have two lovely books just itching to be filled and organized with recipes, you know?" 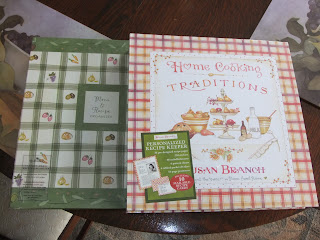 "After that mess was cleaned up from I wrapped up some of the Zucchini & Carrot Bars w/ Cream Cheese Frosting for our son, Paul, as I was meeting up with him today.  The apple pie I had made him was already in my vehicle to go.  He obviously enjoyed it, as the report I got when I had returned home is that he had half it ate before he got back home .... lol, boys will be boys, will they not?" 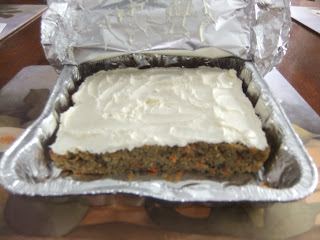 "I did find the recipe once the mess all over the floor had been cleaned up.  Lunch was a "hit" once again with Layered Enchiladas being served up!" 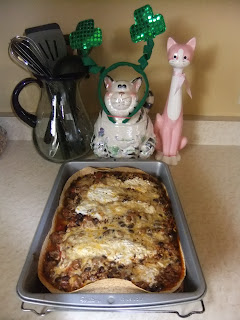 Kraft's Layered Enchilada Bake, so easy and good, can be found HERE.

Personally I love the PC brand Black Bean & Corn Salsa, instead of using a regular Salsa.  I had picked up the large tortillas in error, so that is what got used, rather then the medium sized ones.

We had just finished up with our Dinner when it was time to head out to meet my boys halfway to bring back our Aiden for the March Break.


"On my drive South there had been a few vehicles on the side of the road, as shown here in this picture.  This would be hunters running their dogs on Coyotes.  This is a most common sight, with Coyotes' numbers increasing the last few years in Grey/Bruce Counties, and surrounding areas.  There have also been reports of person(s) being attacked here and there by Coyotes, they have become so "bold"." 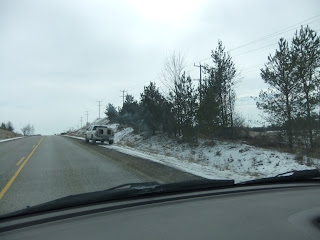 "The day was grey and overcast, but the roads were bare with clear sailing right through." 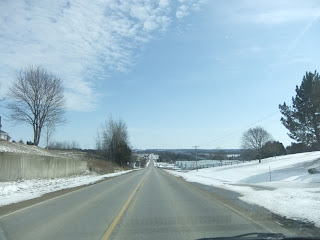 "I arrived to my destination in a timely manner where I picked up the "goods" to leave the rest in their own vehicle across the way for them to make their leave back home.  Really Paul and little Connor are in there somewhere !" 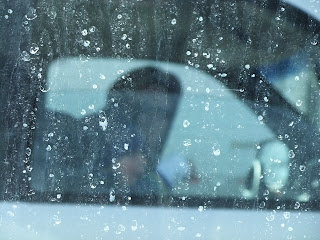 "Halfway home at Hwy. 21, unfortunately there had been an accident.  It seemed everyone was out of their vehicles safely with the Police and EMR vehicles already there, as well as a Tow truck." 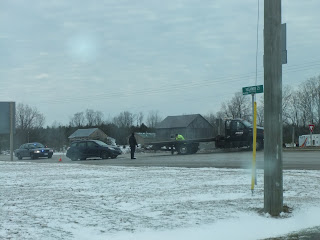 I got my goods home, where the "pack" were all taken care of before we head on downtown Wiarton ....


"... where we partook of the Salvation Army's Spaghetti Dinner by donation with proceeds going towards the Children's Camps.  Great cause and a pretty good turnout, if I do say so myself.  We also had the pleasure of having supper with my walking friend, Sharon, who was there volunteering her most gracious services to the cause." 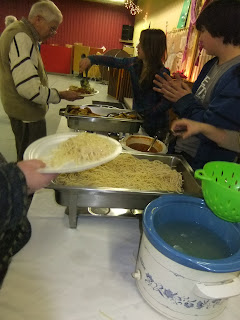 "Returned back home, once again, with my "goods" in the form of our Riptail Snorter #1, Aiden, he was reunited with one very delighted best buddy !  Were these two every happy to see each other, as these pictures show." 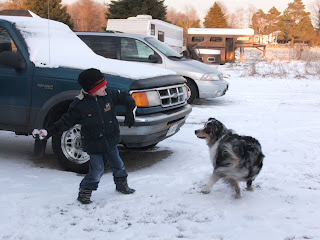 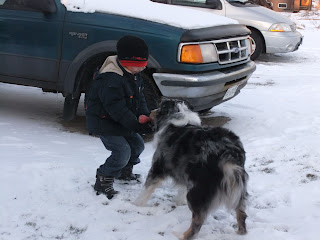 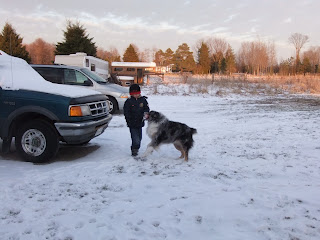 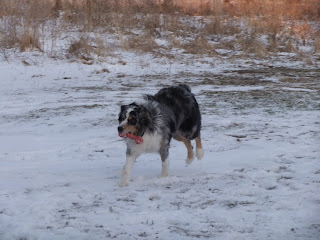 When together, you never see Aiden without Bandit.  They are inseparable and have been friends for almost seven years now.
"Once the two buddies were done playing, my dear boy, Aiden, decided his muscles were big enough to carry up his bag Mommy had packed for him (it was heavy enough the kitchen sink could have been in there)." 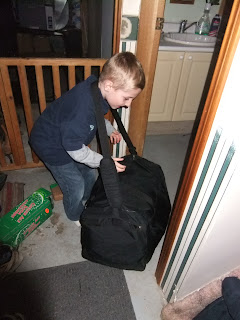 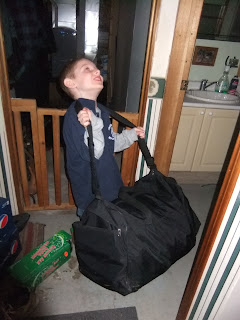 "Mercedes was overjoyed, as she has never had a real boy just her size to play with before !!!" 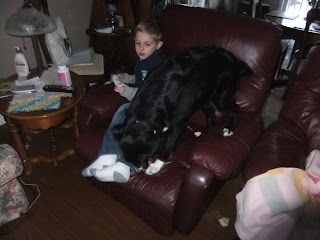 I couldn't believe after Aiden had ate a huge dinner plate of spaghetti, Caesar Salad, with a second helping of spaghetti, then a pile of cookies, that he actually asked for something more to eat not too long after .... the boy certainly must be having a "growing" spurt !

Bandit and Lexus have been looked after for the last time this evening, Mercedes still needs a venture out one more time yet, Aiden is chilling and watching a movie on Netflix, and I am thinking I am soon going to call it a night here shortly, but before I do ....

The last Public performance by "The Man in Black" ....

I am sure the week ahead will hold lots of excitement for all of us here, as the boy asks, the second time tonight, for more food, (LOL), "Just North of Wiarton & South of the Checkerboard".
Posted by Cindy@NorthofWiarton at 3/10/2012 09:04:00 pm