I am so happy happy happy I didn't start cleaning out my flower beds, as it has turned wet, damp, and cold, compared to last weekend and most of this week with temps up in the 20's (Celsius that is).  Today has been a much cooler 30* C (10*F).  I even put a little fire on in the woodstove to take the chill out of the house this afternoon, can't be having my bones creak any more then they do now, now can I ?


"I would so miss our little Wind fan should we not have it, as I am so used to counting on it for which way the wind is coming.  No wonder it is so cool today as winds are out of the Northeast." 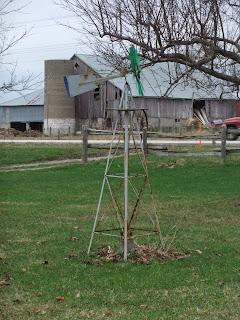 It was a usual trip up "North of the Checkerboard" for my weekly shot in the arm by the "Good"  Dr. Loney.


"The Hoya Plant in the Good Doctor's office had a bloom on it this week.   I love the flowers on a Hoya Plant, with their waxy appearance and daintiness." 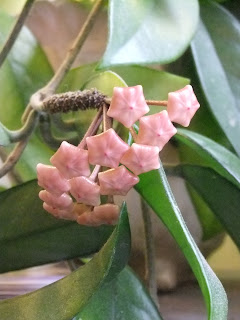 Rob was up early this morning, so he actually drove me there, which was nice to be able to spend a little more time with each other.  I made the mistake of leaving my Cell phone with him while I was gone into the patient room.  When I had finished up with my appointment there he was sitting with a "huge" grin on his face.  I knew right then he had been up to something !  Of course !  he had been texting our daughter-in-law, Holly, as well as my niece, Joanne, with "crazy" stuff trying to let on it was me .... I think they figured it out soon enough though and were on to his "game".

We made a pit stop back at home then headed right out again to Owen Sound, as the Accountant had called to say our taxes were done, "could we come in to sign some paperwork".  On the road again we were .....once we were all finished up at the Accountants, I took advantage of us being in Owen Sound by popping in to the No Frills store to pickup a few items I find cheaper to purchase there then at our local store.  The big box stores usually are cheaper, aren't they?


"The Tax Man comes, reaches out & grabs ya !!!  LOL, and he also returned those triple dang "Crabby Cabbie" books to me too, which I really didn't care to have back !" 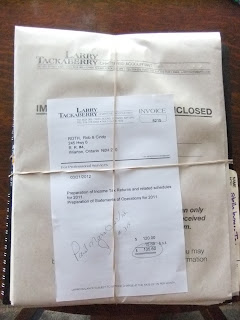 By the time we got back home, unloaded the few grocery items we had purchased, we needed to get right on the "ball" with the making of our Dinner. 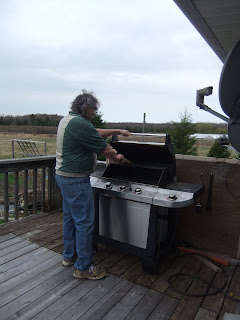 "Despite it being cool, it wasn't raining at the time so Rob did our boneless loin chops out on the BBQ.  They were mighty tasty after being marinated in Zesty Italian Dressing overnight , barbecued, and served alongside boiled cabbage and cauliflower." 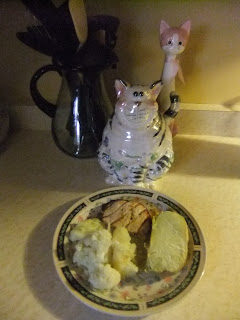 It was going on to 2:00 pm by the time our Dinner was over and cleaned up from, so I had to make haste to get some Blueberry Muffins made up and in and out of the Oven before Rob put on his "Crabby Cabbie" hat, so he would have some to take along for his lunch.
"Right out of the Oven just in time before he had to leave." 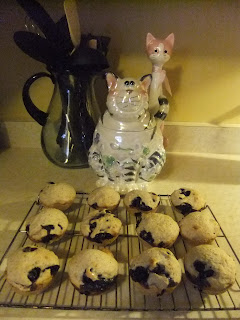 Spoon into greased muffin tins (DO NOT use muffin liners, as they will not come away from a liner once baked because of the low fat).

Bake at 375*F for 25 minutes. Note: Oven temps vary.
— Made at Cindy's Kitchen @ "Just North of Wiarton & South of the Checkerboard".
Remember these muffins are not the sugary sweet type we are usually used to making, if you should make this recipe, but much lower in fat content.
"When I had been running errands yesterday, I had also picked up a few Birthday Cards for upcoming Birthday in the next couple of months.  Do you buy Greeting cards in advance?" 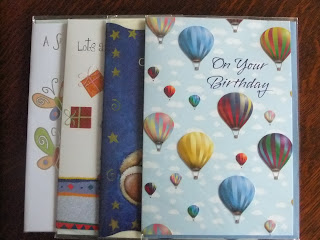 While I had been sitting here "blogging" last evening, the dogs got to barking.  I ended up going outside to find who other then  ....
"Winter must be over, cause there is that Ralphy Shular guy out in our Yard, giving that McNabb guy who stored his old car in our barn this past Winter a hand."| 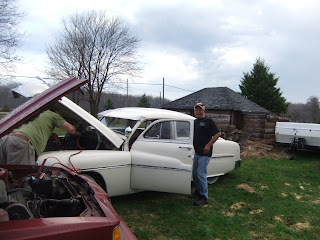 "Ralphy is already sporting a new 2012 Bike Week shirt.  Guess it won't be long til he has his HD out.  Now would that be his Hound Dog, or his Harley Davidson ... I wonder?  LOL" 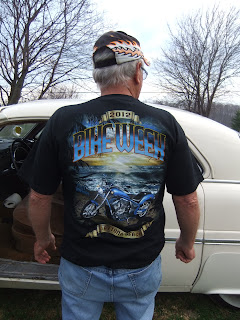 I have been feeling just a little melancholy tonight, thinking I will share a little Harry Chapin to match my mood.
"How are you, Harry .... how are you, Sue ..."


I am thinking I will just "chill out" by putting my feet up the remainder of the evening for some R&R, "Just North of Wiarton & South of the Checkerboard".
Posted by Cindy@NorthofWiarton at 3/23/2012 08:32:00 pm