A Little "Missy" Was In A Spot Of Trouble & Then Some

"This was Yesterday afternoon.  The winds gained momentum later in the evening with the roads icing up.  Rob said the roads were not too pleasant to travel in most areas.  I know around 8 pm there was two plows going by our house 10 minutes within each other.  It was pretty blustery." 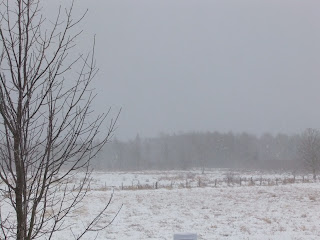 They have been calling for more of the same today with accumulations of 15 cm and a Snow Squall Warning still in effect for our area, as well as surrounding areas, with it coming off Lake Huron.  We have no need to leave our house tonight, so Rob, myself and the "pack" will remain "snug as bugs" inside.
A new day dawned after I had actually enjoyed a not too bad fitful sleep until the "Crabby Cabbie" arrived safely home in the wee hours of the morn.  I didn't really get back into that fitful sleep afterwards, finally arising just before 7 pm. carrying on with my and the "pack's" usual morning routine.
What was I going to do with my Sunday?  Rob had asked if I would make him some Banana Muffins, so I had it in my mind to do this as I had taken some bananas from the freezer the night before to thaw.
I did talk to my son, Paul, on the phone this morning for a bit.  Afterwards him and Holly did a little texting back and forth with me.  Holly informed me she was going to be going to a fund raiser this afternoon by doing a  Zumba demonstration to raise money for a cause.  Paul had texted me she was doing Zumba on their Wii System at that moment, and Aiden was going to be after her.
Unbeknownst to either Holly or Aiden, Paul took some photos and emailed me so I could see what these two were up to so early in the morning in front of their Wii System with the Zumba program happening. 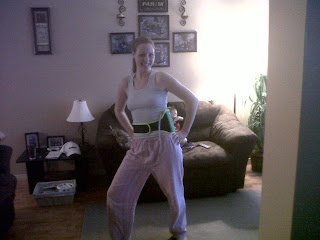 "Here we go with my early morning Zumba dancers having fun and burning those calories away staying fit.  Zumba has been quite the "rave" for the past while, I have yet to personally check it out myself, by these photos of Holly & Aiden is sure looks to be lots of fun." 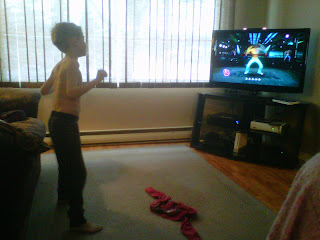 "Isn't technology great that Paul was able to email me these pictures, "just like that", without anyone else knowing?  LOL."

Not familiar with Zumba?  The "beat" is very catchy and lots of fun, so check out how it all came to be by going into this web link:  http://www.zumbawithhope.com/History_of_Zumba.html


"Quite the mess to be cleaned up when I found the upset.  Thank goodness I hadn't watered the plants recently or it could have been a little bit on the messier side of things." 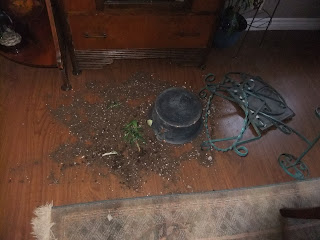 "A little Miss Someone did not want to own up to the fact that she had caused this mishap." 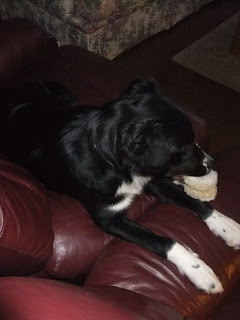 "Finally I got somewhat of a confession out of her." 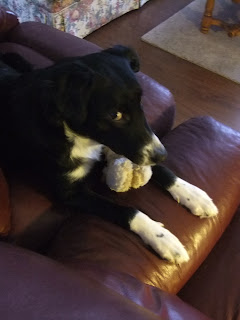 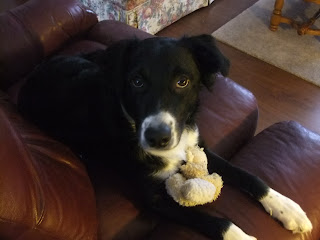 "We got it all back set up the way it had been once the broom and vacuum had done their job first." 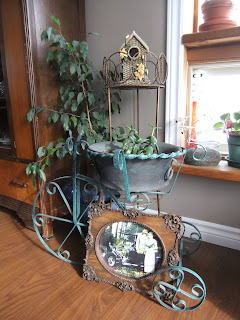 I had the kitchen all tidied up and ready to get down to making the Banana Muffins when I realized I had used up all the sour cream I had the other day on the Layered Enchilada Bake I had make.  My Crabby Cabbie had just gotten up from his "decrabby" himself sleep, so he suggested we head on down to the store to pick some up.

We returned back home and I finally got down to getting the muffins made.


"The butter and sugar has been creamed together, the eggs added and just waiting for the sour cream to be added, along with the Vanilla." 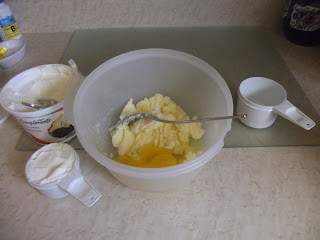 "Wet and dry mixtures all ready to go, just waiting for the Bananas to be peeled and mashed." 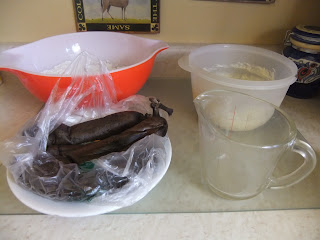 "I bought this ladle, along with one smaller size, at the Dollar Store.  It is the perfect size to scoop muffin mix in to the muffin liners." 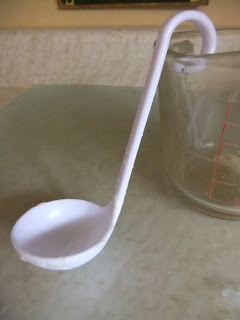 "Eighteen Banana muffins going into the oven for 20 minutes or so.  My oven is not right on so they did take 30 minutes to bake." 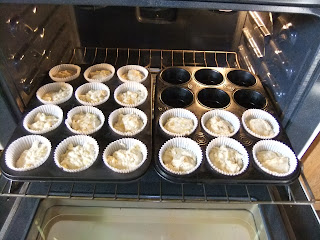 "Before I knew it the time was up and "Viola" Banana Muffins were sitting on my Counter Top cooling." 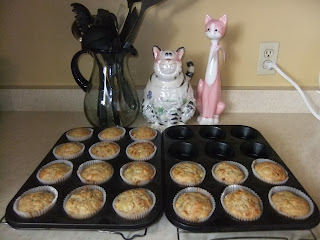 Rob and I really enjoyed a couple of Banana Muffins for our lunch.  Yummy !  Rob actually thought they were "Out of this World".  The recipe was submitted by my friend, Reenie, to Cindy's Recipe Exchange the other day, wherein she also had posted photos of the ones she had bake.  They looked so "amazing" I just had to try them myself, as Rob had just requested Banana Muffins the other day.  Here is the recipe:

After all the muffin making was over and cleaned up, I got to go downtown for a walk with my friend, Sharon.


"We happened by this "metal" flower beside a house.  I absolutely love this type of metal garden art." 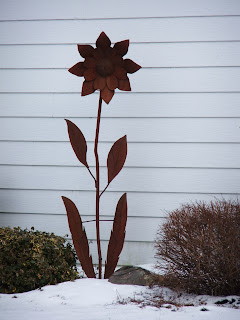 This was pretty much my day all in a "nutshell".  Oops I almost forgot about the other little mess I had around and about the house from a certain little Missy, after the other upset I might add ....


"I think there is one more toy with "stuffing" and a "squeaky" left in it after this one had been de-stuffed.  LOL." 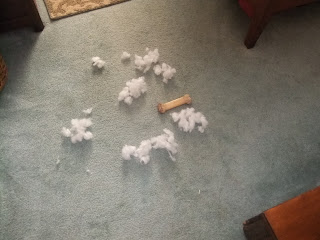 I am trying a Pork Tenderloin recipe out for tonight's supper.  It is in the oven now as I sit here typing away, almost going to be done I believe.  I will do a "post" on how this new to me recipe went tomorrow.  My girlfriend, Vicki, tried it already on Friday, and her and her husband, Doug, absolutely loved it.