The Big Guys Says "No More Chicken For A Month" !

My day started out pretty slow, as my "Crabby Cabbie" hadn't arrived home until the wee hour of 4:00 am this morning, so the "pack" and I had to be pretty quiet in order he could get his "de-crabby" himself sleep.

First thing I first took Missy Mercedes out, then Lexus, and lastly Bandit.  It was actually not too cold this morning, so we all rather enjoyed the early morning romp much better then the freezing cold mornings of the past few days.

I puttered around a bit, took Bandit and Mercedes out again, this time out into the back field for a big romp, back in again to have myself a shower, then put a load of laundry in the washer, and puttered some more.  At this point I was starting to get tired of the "puttering" around so much.

I even displayed the great deal I got at our local Drugstore for next Christmas.  I was so impressed at what a great deal I had gotten !


"I just thought these guys were so adorable.  How could I refuse a 75% discount?  Total for all seven items were under $13.00, and I have a start on my Christmas shopping for this December already." 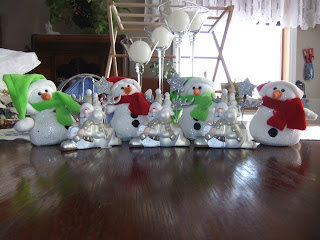 "The Santa Claus and Reindeer is a photo holder for those precious moments of grandchildren sitting on Santa's knee photos.  The bean bag Snowmen are what I thought would make great stocking stuffers for the grandsons." 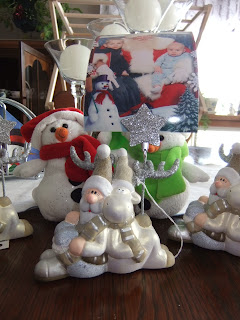 Before I knew it, it was 1:00 pm, and I am thinking half the day was over and my Crabby Cabbie should be "de-crabbified" with enough sleep by now !!!  I went in and said, "Honey, are you awake cause I am lonely and bored waiting for you to get up".  Amazingly enough, he got up and wasn't even "crabby" about doing so .... lucky me, eh?  LOL.

My Aunt Gerry and Uncle Reg are up from the City of Toronto visiting Auntie Gladys and Uncle Basil.  This is an annual visit about this time every year.  Rob and I had to drop over to Port Elgin anyway to pickup a few items that had been offered to us by Auntie Gladys' friend, so I could not be so close by without stopping  over there to say "hello" to everyone.

Once Rob had a coffee into him, we headed out ....


"We took the scenic route on our way to Port Elgin.  Sauble Beach certainly looks a lot different in the Wintertime then from how it looks in the Summer months, does it not?" 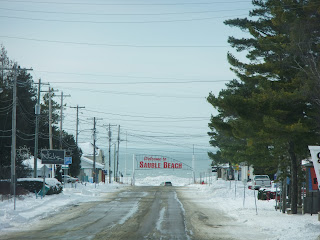 After driving the winding road from Sauble Beach to Southampton we were finally heading  across the bridge over the Saugeen River.


"I am certain a week ago the mouth of the Saugeen River had been completely covered in ice, not so being the case today." 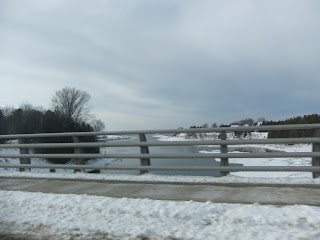 Once we arrived at Auntie Gladys and Uncle Basil's, it just so happened my Cousin Vi, and her husband, Ross, were there having a "hello" as well.  It was an enjoyable little get together, until there was a "mishap" .....


"Here is my Aunties cleaning up after someones little "mishap".  I will not center out which Uncle was responsible, as really I am quite fond of  the both of them." 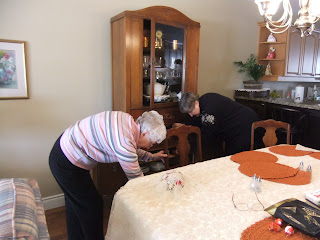 We had a nice afternoon of sharing stories and a few laughs.  Vi and Ross had to run a couple of errands, so they took off a little bit before Rob and I did.


"Good-byes were made, as we won't be seeing Auntie Gerry and Uncle Reg again until our Family Reunion in August." 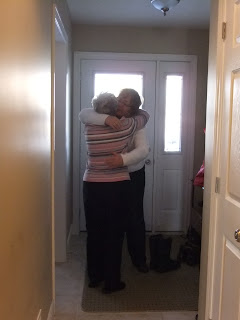 Rob and I were able to stay put for a bit and enjoy a little more of the Aunt and Uncles stories and company.


"Auntie Gladys & Uncle Basil all layed back just a chilling and enjoying their company." 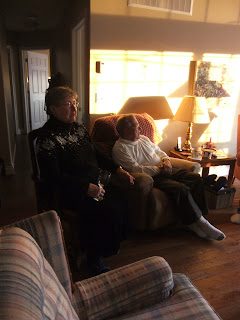 "As I had said, since we won't see the Auntie Gerry and Uncle Reg until August, I had thought it best to get a "picture" of the two of them.  Uncle Reg is looking pretty lovey dovey here, I wonder what he has up his sleeve?  What was that Uncle? a trip to Australia you were thinking about were you?  LOL, but you have a trip planned to England in May with the Auntie first, do you not ?" 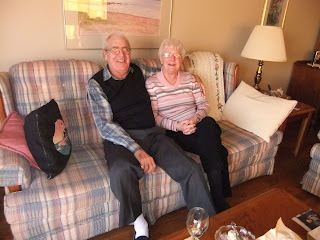 Since Rob had told me he didn't want any more chicken for a month, and not to take out anything for today's dinner, I was assuming he was going to be taking us out for Dinner after our visit with the Aunts and Uncles.  Since it was getting to be that time of day, we had to say our good-byes.


"Of course the "smartest man in Port Elgin" that being my Uncle Basil pictured here in the white shirt, and his side kick, Uncle Reg, had to see us off properly.  Oh dear, Florida in March will never be the same again, after these two have "hit" the Beaches together !  Watch out Florida here they come !!!" 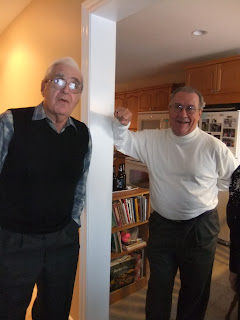 
"My "Crabby Cabbie" took us to "Crabby Joe's", how fitting was it for us to go there.  Since he is so tired of chicken, it was a patient look he had of "bring on the beef" ! " We had never been to a Crabby Joe's Restaurant before.  I have to say, we both really enjoyed our Caesar Salads and T-Bone Steaks.  The steaks were on special for $15.00 per meal, a $3.00 discount off regular price, and $2.99 each for the side of Caesar, which was a good size salad.  We both agreed we would definitely go back there again for a meal.

On our way out of Port Elgin, we had to stop into Cousin Vi and Ross's

We finally got started back on our way home again, to where a very happy Bandit and Lexus were waiting for us (Mercedes, being the baby, had been with us).  Home sweet home after a great afternoon and evening out with Family members and each other.  I absolutely loved it !!!

Oh yes, and I also rid myself some more of that awful "Cabin Fever" I have been getting bouts of the past couple of weeks.

Here I sit thinking, this is the latest I think I have ever done my "blog".  I am now content it is done, and I can take my leave hopefully towards a fitful night sleep for myself, "Just North of Wiarton & South of the Checkerboard".
Posted by Cindy@NorthofWiarton at 1/22/2012 09:06:00 pm