We all slept like babies last night without a peep in the house until almost 7 am.  I had been up a couple of times, as well as Rob.  At one point he came back to bed telling me what a traitor Bandit was, as where was he? laying in beside Aiden's bed.  He loves his Aiden boy, and has since they were both young lads.

When you were looking for Aiden, you knew Bandit was never far from his side .... these are a couple favourite photos of mine from years past. 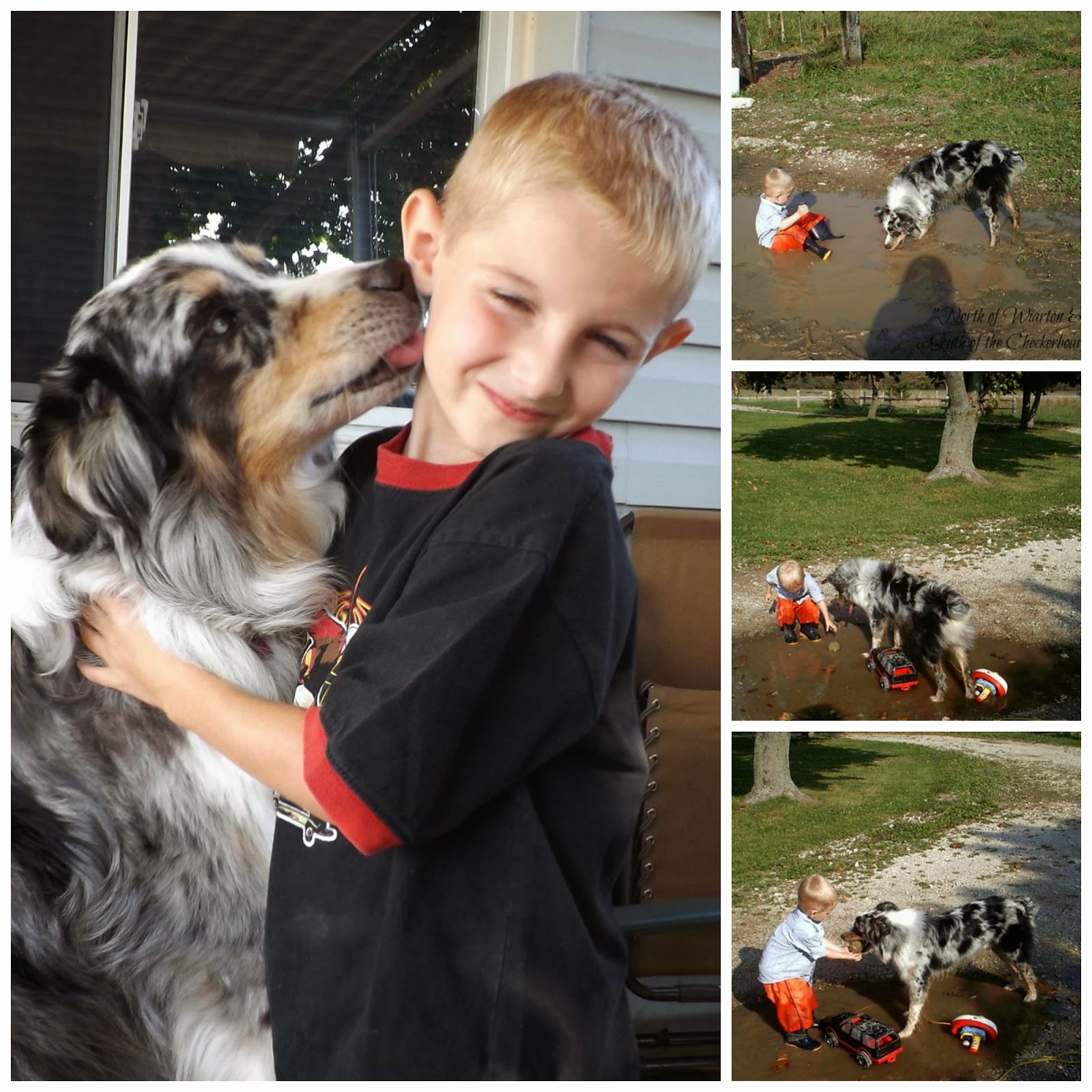 After I was done with the Aussies' needs then it was time to attend to my boy's needs, as in the way of breakfast.  I could not believe that they each had a bowl of cereal twice this morning.  They are both growing leaps and bounds.

No sense getting dressed right away when on vacation at Grandma & Poppas, especially when they can cuddle up with throws and watch kids programs first thing. 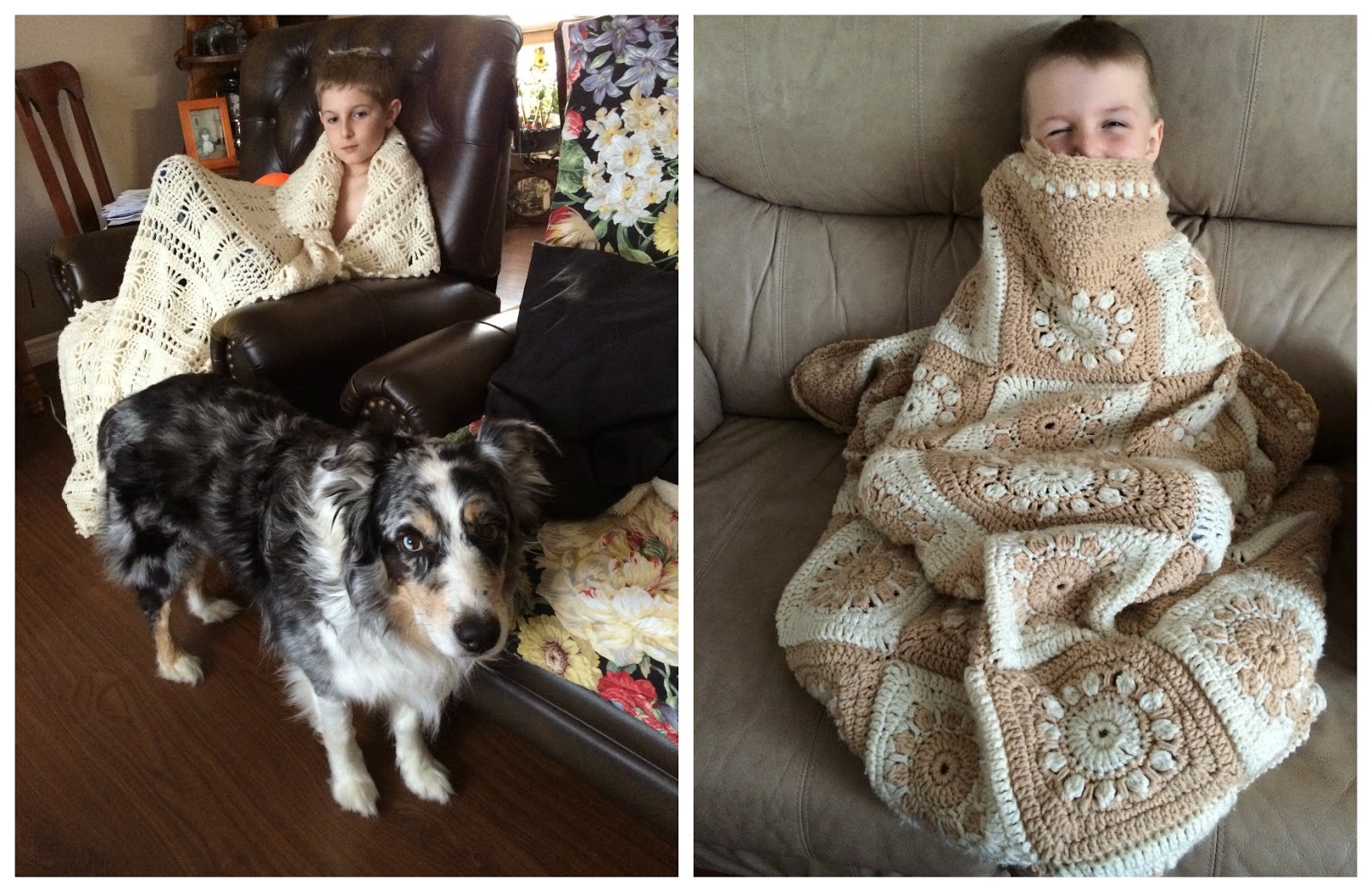 Yes I eventually had them get dressed, just in case we were called out or something.  Before lunch they were working on their activity books.

Portia can not seem to get enough of Connor, and had been all over him from the time he had gotten up this morning. 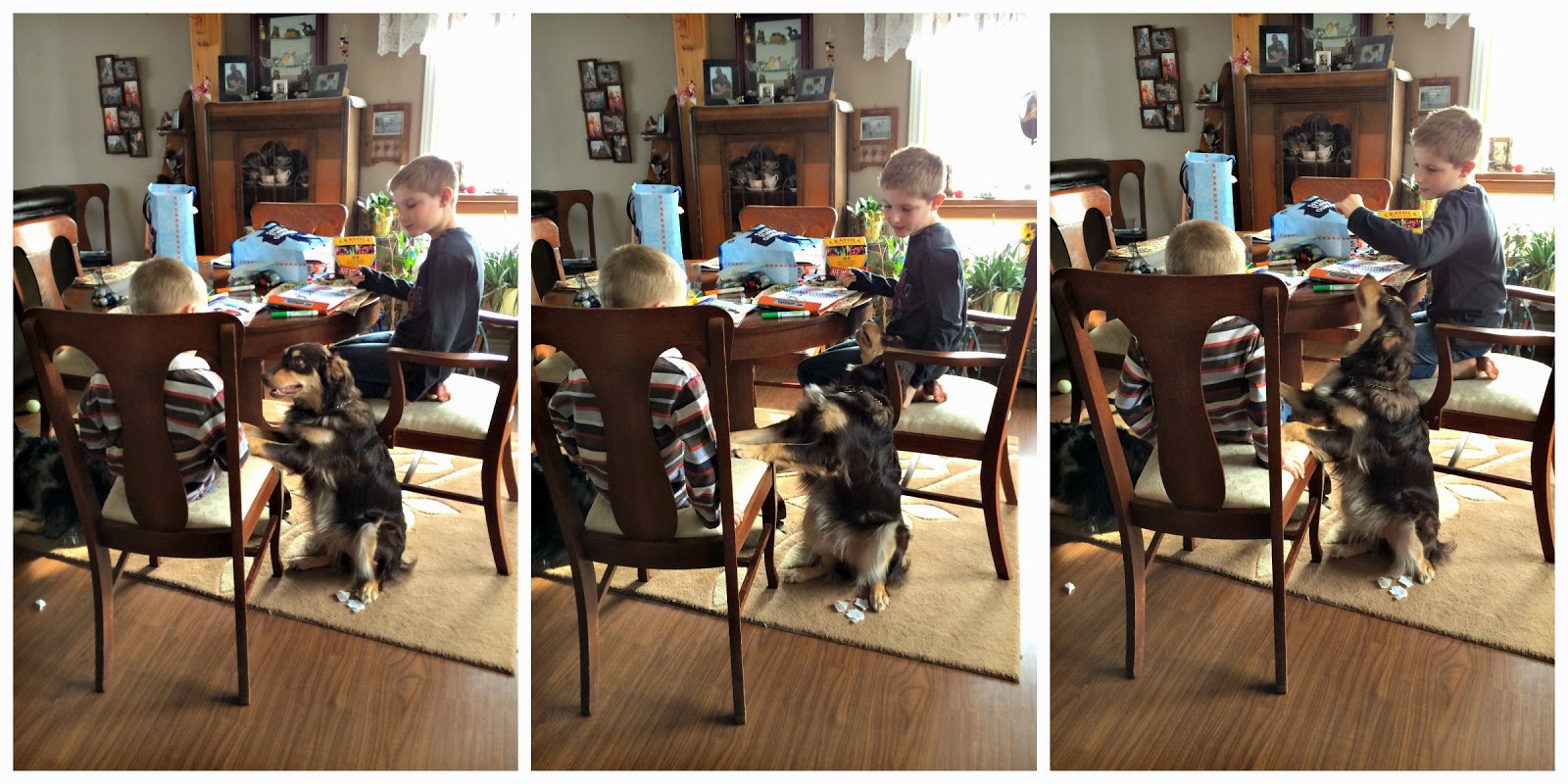 Poppa hadn't come home by lunch time so we had our lunch before he got here.  Leftover Roast Beef on a bun.  Aiden asked for seconds he liked it so much.  Poppa came in after we were done to have his lunch before we headed over to his appt. with the specialist about his hip.

I had tried to get Connor to bet me that he would be asleep before we reached our destination, however he wouldn't bite as he knew he wouldn't not long after we had started out.


Nothing like being lulled to sleep by a drive in a vehicle is there? without a worry in the World. 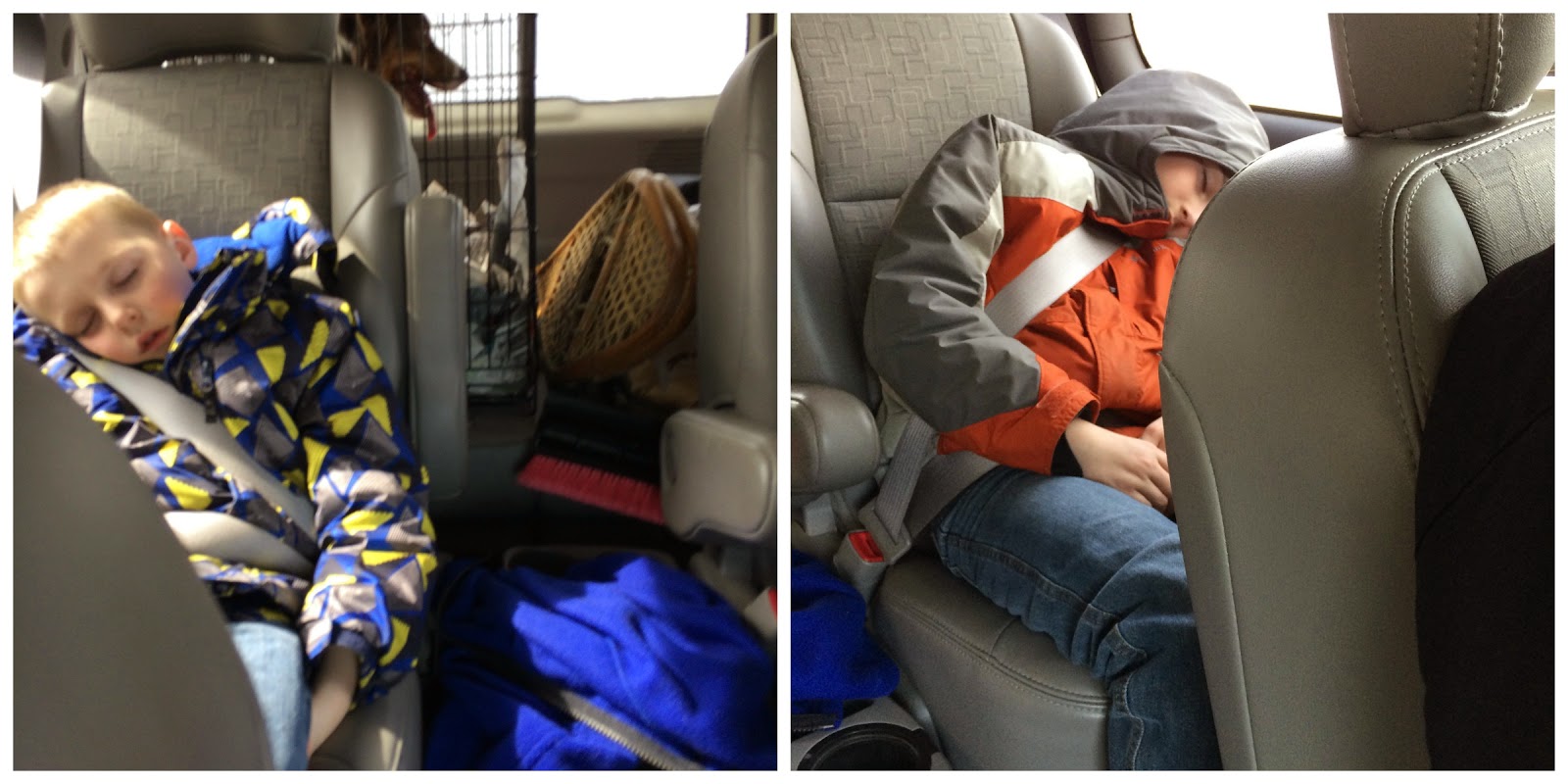 Rob's appointment went fairly well I suppose.  His hip is arthritic, however not bad enough for a replacement, however the arthritis in his back is much worse, even though it wasn't addressed any further then that at his appointment.  I suppose he will make an appt. with our GP to see if there should be anything further done about his back.  The specialist told him to keep on loosing weight and doing what he has been doing, and that was that.

We were barely back home when Rob got a call to go back out.  He dropped us off then headed out on his call.


Back doing activities again, Portia was right at Connor again.  Yes Portia LOVES Connor so it seems some and then more. 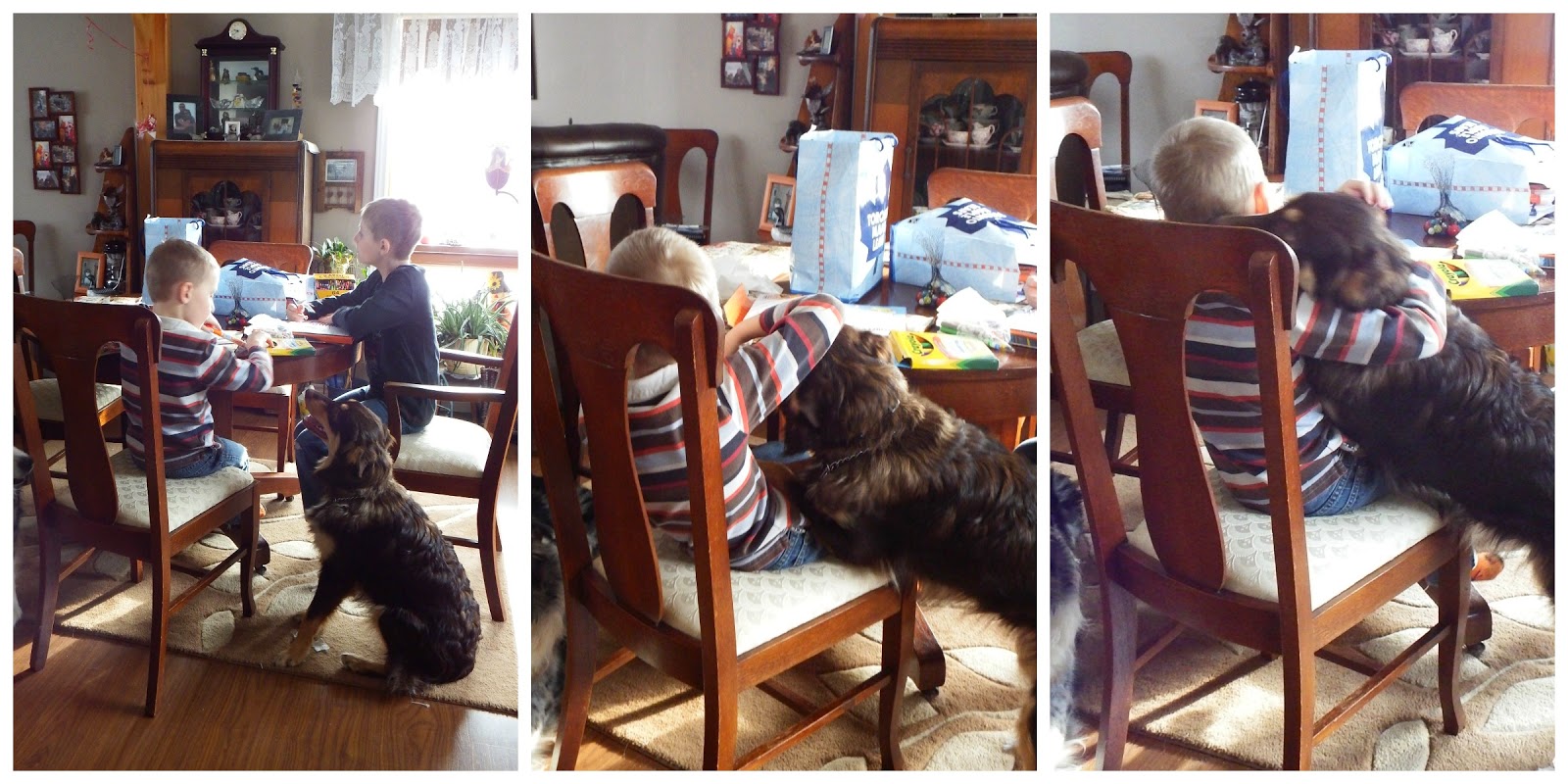 While I made the boy's Dinner they camped out in their favourite spot to watch a movie ...


... on Grandma & Poppa's bed of course, with Bandit laying beside it and Puppy Portia locked out as not to cause any trouble for them. 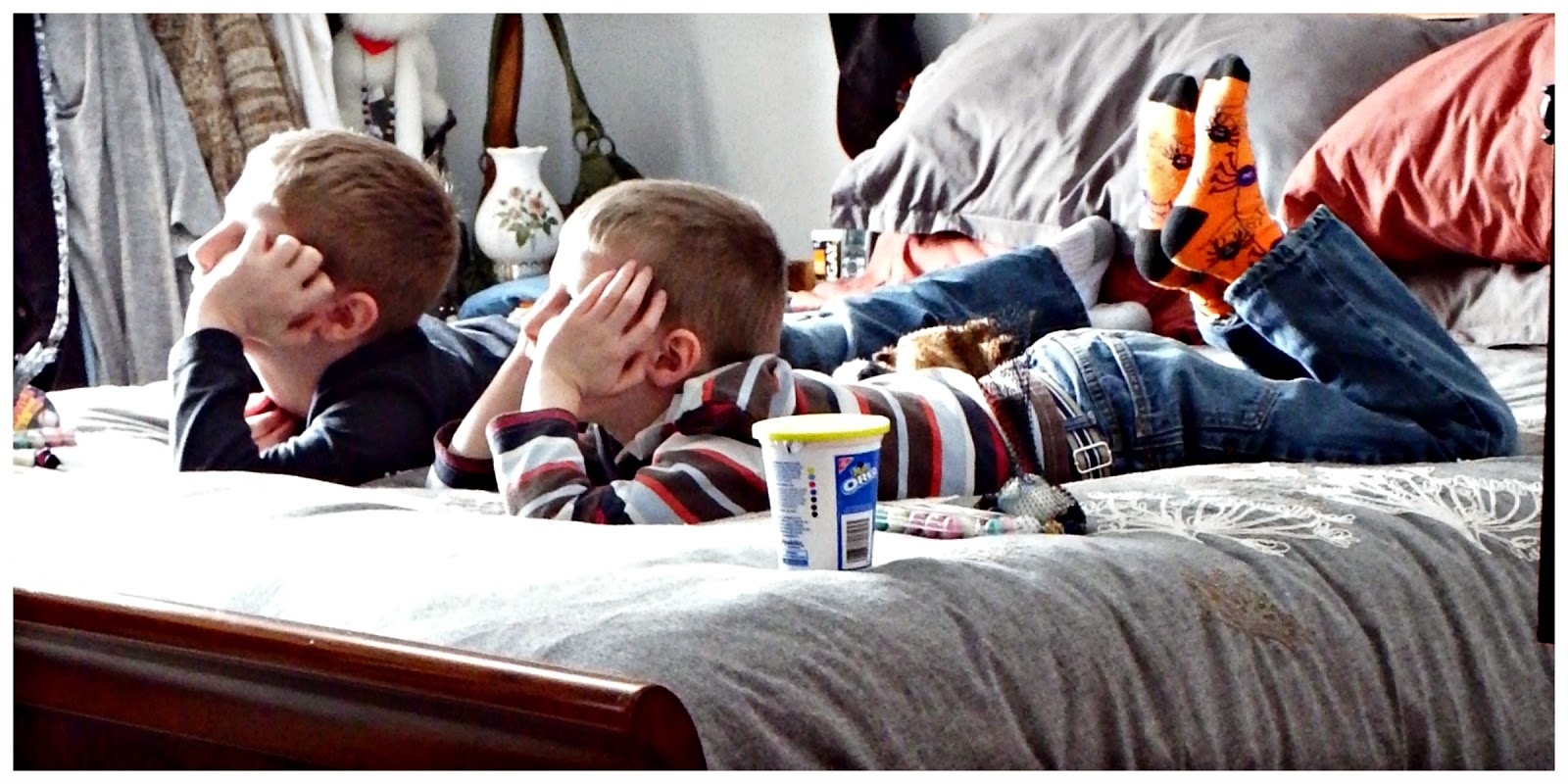 Dinner is over with.  The boys are watching the rest of the movie, and before I will know it it will be time for jammies and bedtime.  They have my undivided attention before The "Voice" comes on at 8 pm, then it will be "lock down" at Just North of Wiarton & South of the Checkerboard.
Posted by Cindy@NorthofWiarton at 3/16/2015 06:37:00 pm