I was wide awake before 5 am waiting for the alarm to go off at the 6 am time Rob had set it for.  Finally it went off and I was up to let the Aussies out, update a Facebook business page, and get ready to head South down the highway, as today was the day we were off to collect our Grandsons, Aiden & Connor.

At 7:30 am my brother, Allan, and his Nancy, dropped of their Grandson, Riley, as we were dropping him off in Kitchener around to his other Grandmas.  I love Riley, and it was nice to have him along on the trip down.  I will be bringing him back home with me to my brother's when I take the boys back home.

After we had dropped Riley off Rob and I headed over to the Petsmart on Fairway Road.  Portia was very good for her first time in a Pet Store, or any store for that matter as it was her first time.

Yes Portia and Rob we having the time of their lives checking out the different "squeaky" toys. 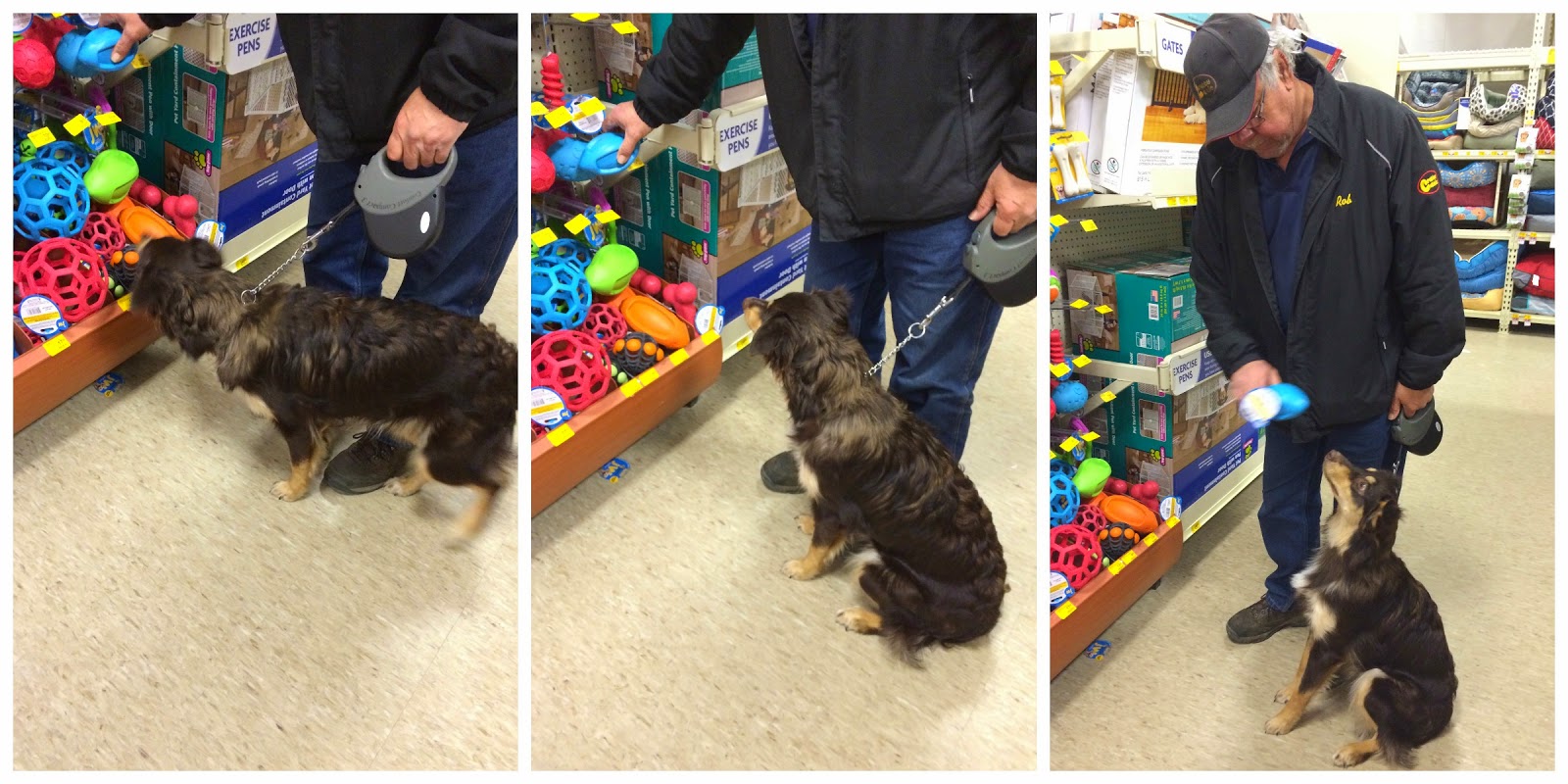 When we were done at the Petsmart store we headed up Hwy 8 to the Costco.  I don't know why but I do like that store, however never have time to really inspect everything aisle by aisle.  Some day, but maybe not as I wouldn't want to spend more money, or at least not be tempted to.

We spent $261.00, however in all fairness $100.00 dollars of that was a gift, so considering what we had purchased that was not too bad at all.  $10.00 of that was also for a Carrot Cake we took along to the kids for dessert after we had lunch there.  We had sampled a small piece and it was very moist, and just baked that morning.  It was a double layer cake and a really good value for what we got.

We were out of Costco by 12:30 and on our way to New Hamburg to the Liz & Paul's home where Aiden and Connor were this past weekend on their visit with their dad.

When we walked in not only were there our Liz, Paul and our 5 kids, there had been two "extra" kids.  The neighbours little girl and baby boy had also been there being babysat quite happily by all the older kids.  Connor was having the time of his life feeding baby boy Logan when we had arrived. 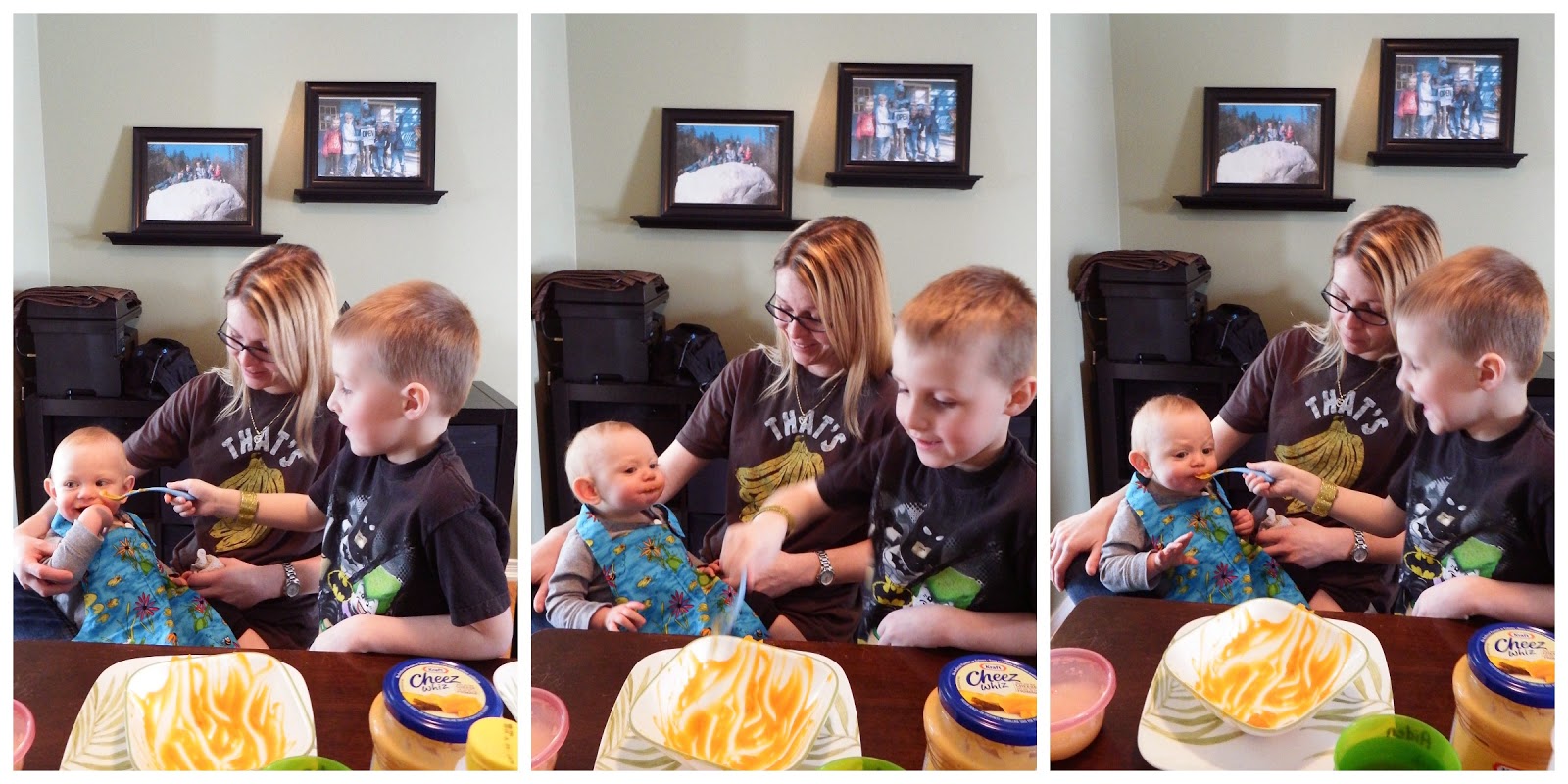 Paul and Liz served up a lunch of BBQ'd hot dogs for the kids, and burgers for us, along with a very yummy Greek Pasta Salad.  Yes this blended family of 7 are very busy busy most all of the time. 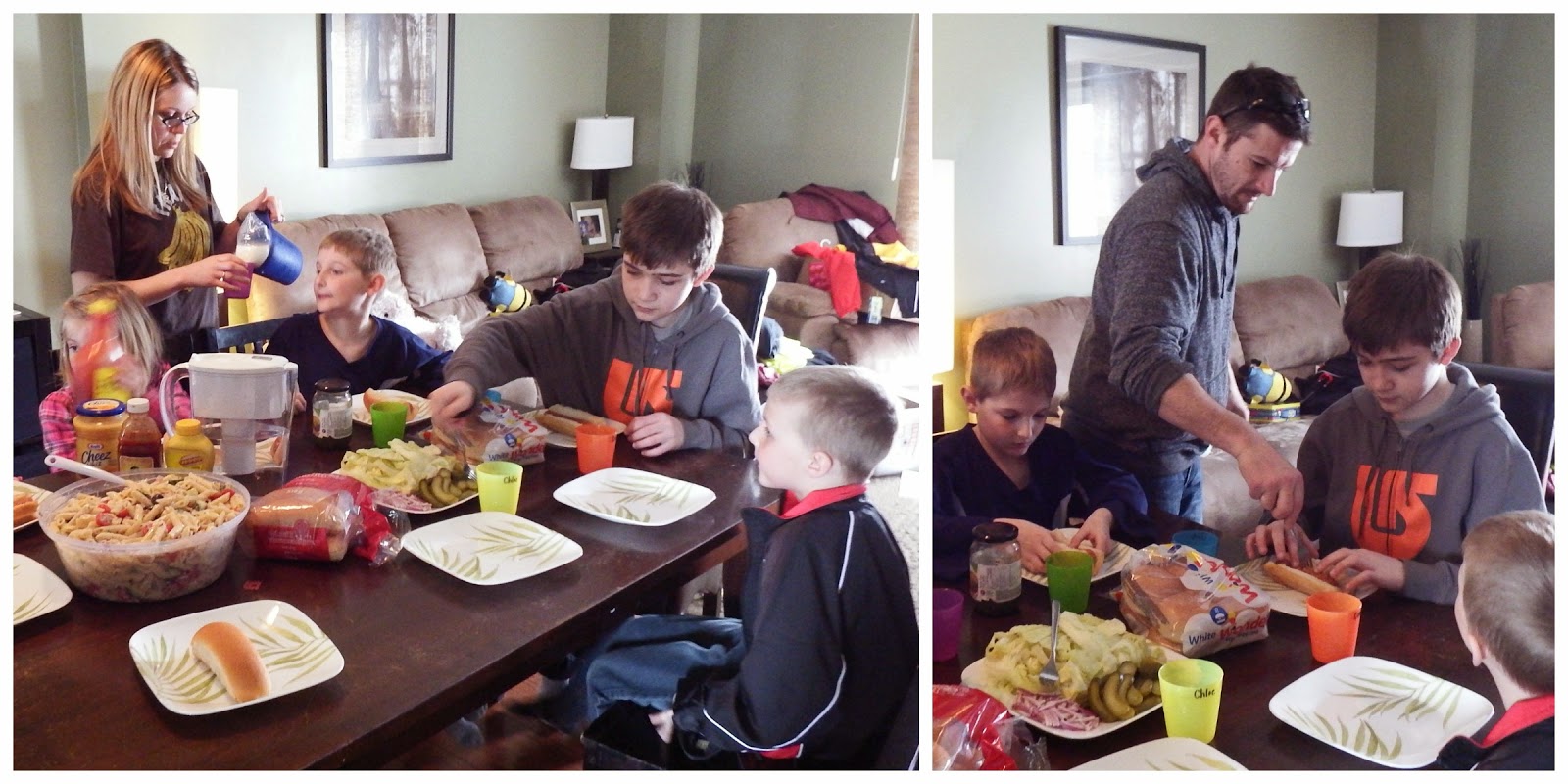 We had a great time in the amount of time we had to visit before heading back home with the boys.  I had brought down "Wiarton Willie" noses for each of the kids, and ....

.... Briar, Josh (with a wig on to entertain us), and Connor appeased me with no problem on modelling the Willie noses.   Don't know where Chloe or Aiden had gotten to.  Love all these kids to pieces. 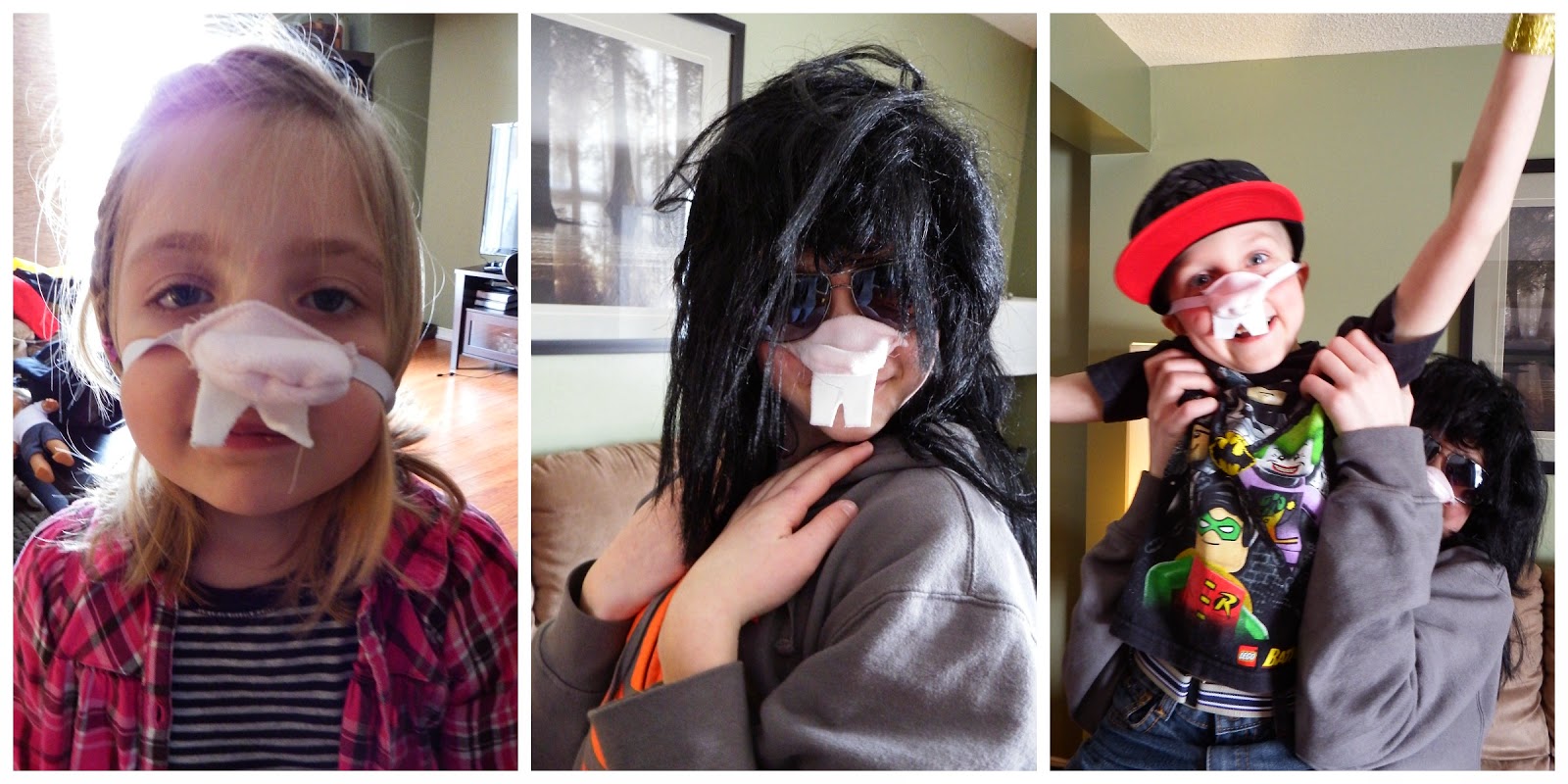 We loaded up Connor and Aiden and headed on back North towards home mid-afternoon.

You have no idea of the reception we got from Bandit when we did arrive home when he realized the boys were with us.  The barking was out of this World (and very loud on the ears) he was beside himself with happiness !!  Check out the smile on his face in these photos.  Portia? she is head over heels about Connor and licks him every chance she gets. 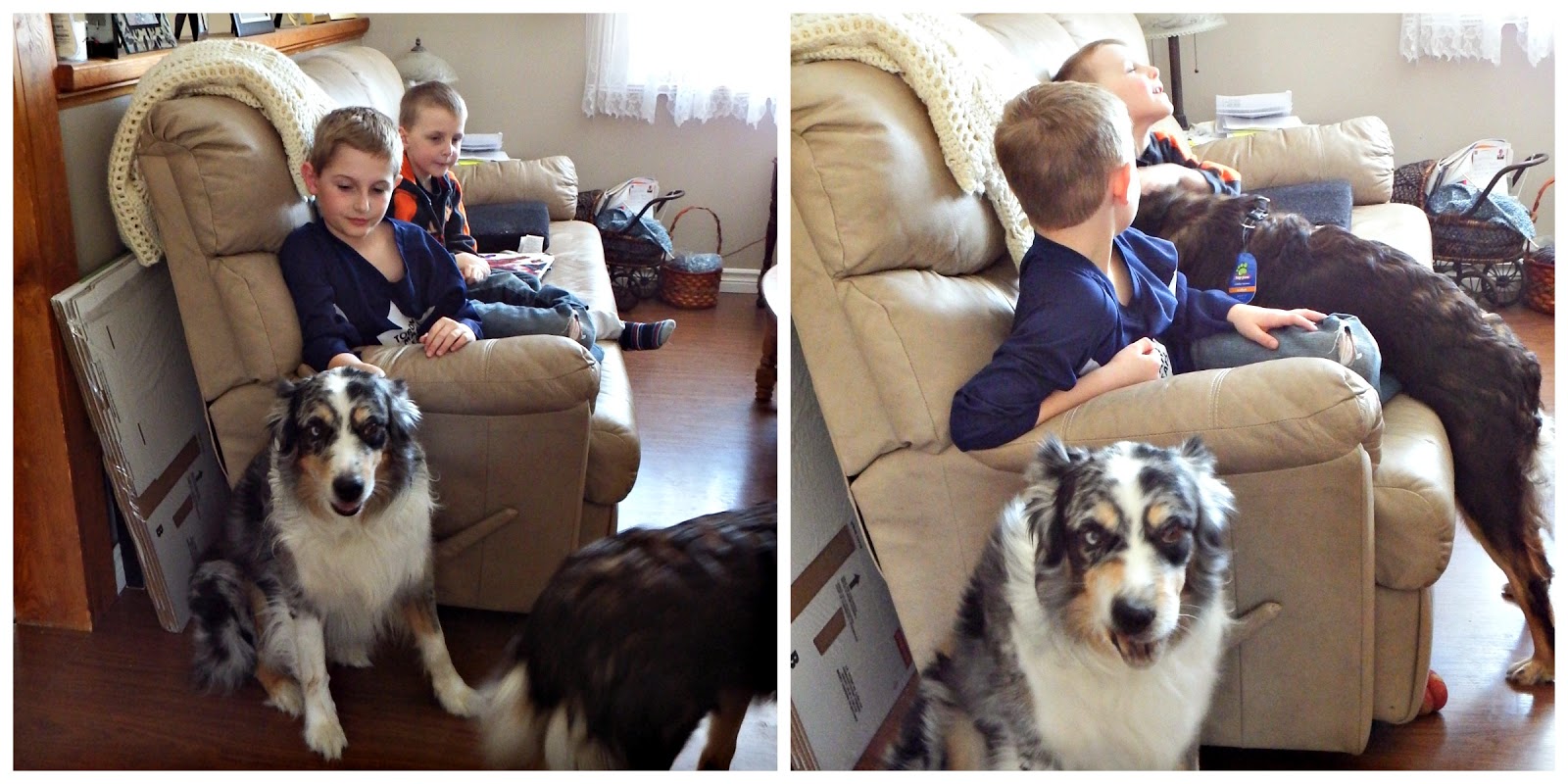 Before we left this morning Rob had put a Roast of Beef, along with carrots and potatoes, in the Crock Pot.  We all had ourselves a great Dinner together.

Liz and Paul had made up each the boys a "care pkgs" for them to open when they arrived here.

Boy oh boy oh boy were they both happy with their "care pkgs" !  Poppa was even showing the kind of faces he should be making over some of the contents ... hahaha now I have two hams in the house to contend with. 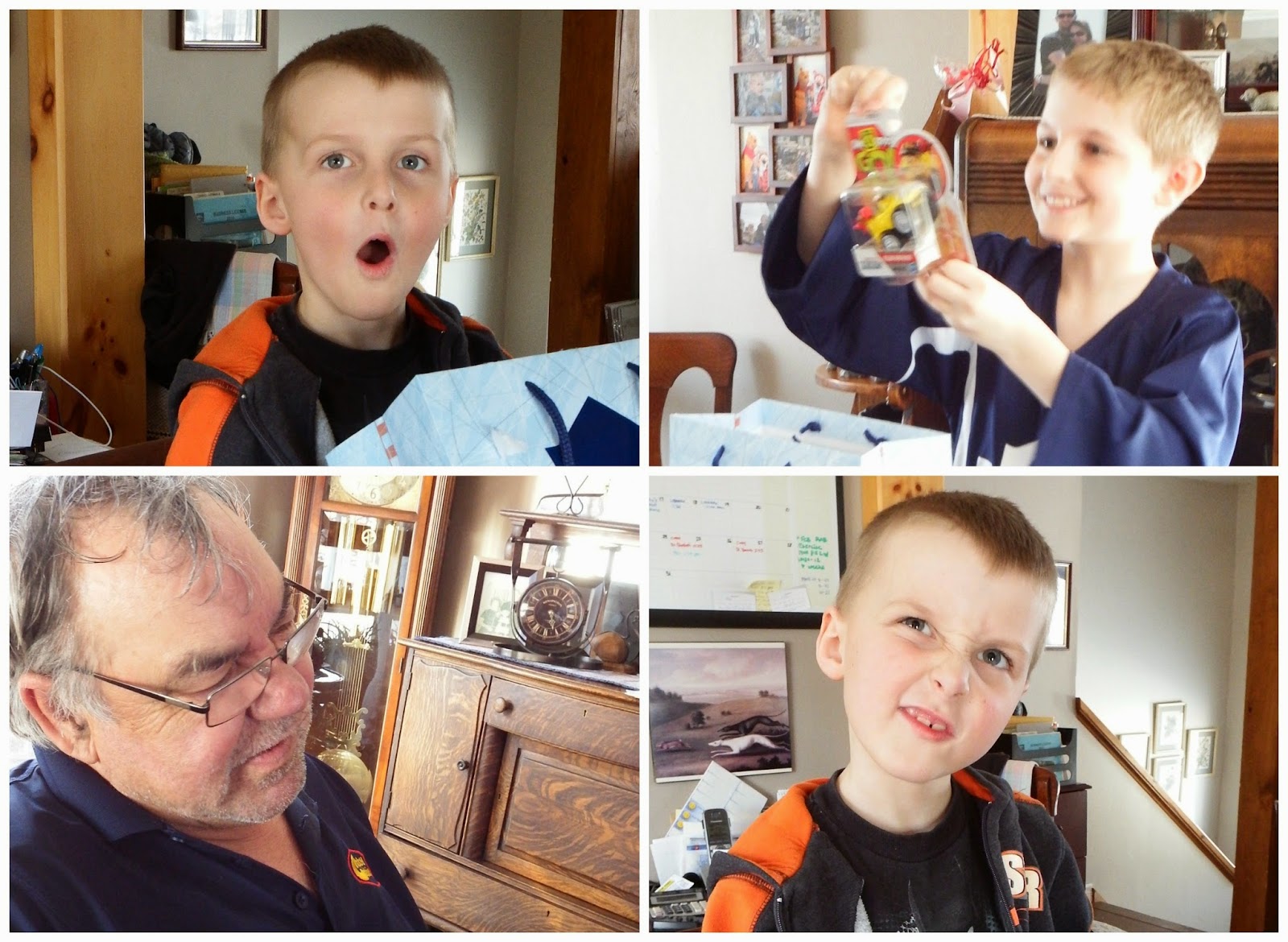 I really think Poppa was having as much fun as the boys over the stuff they had gotten. 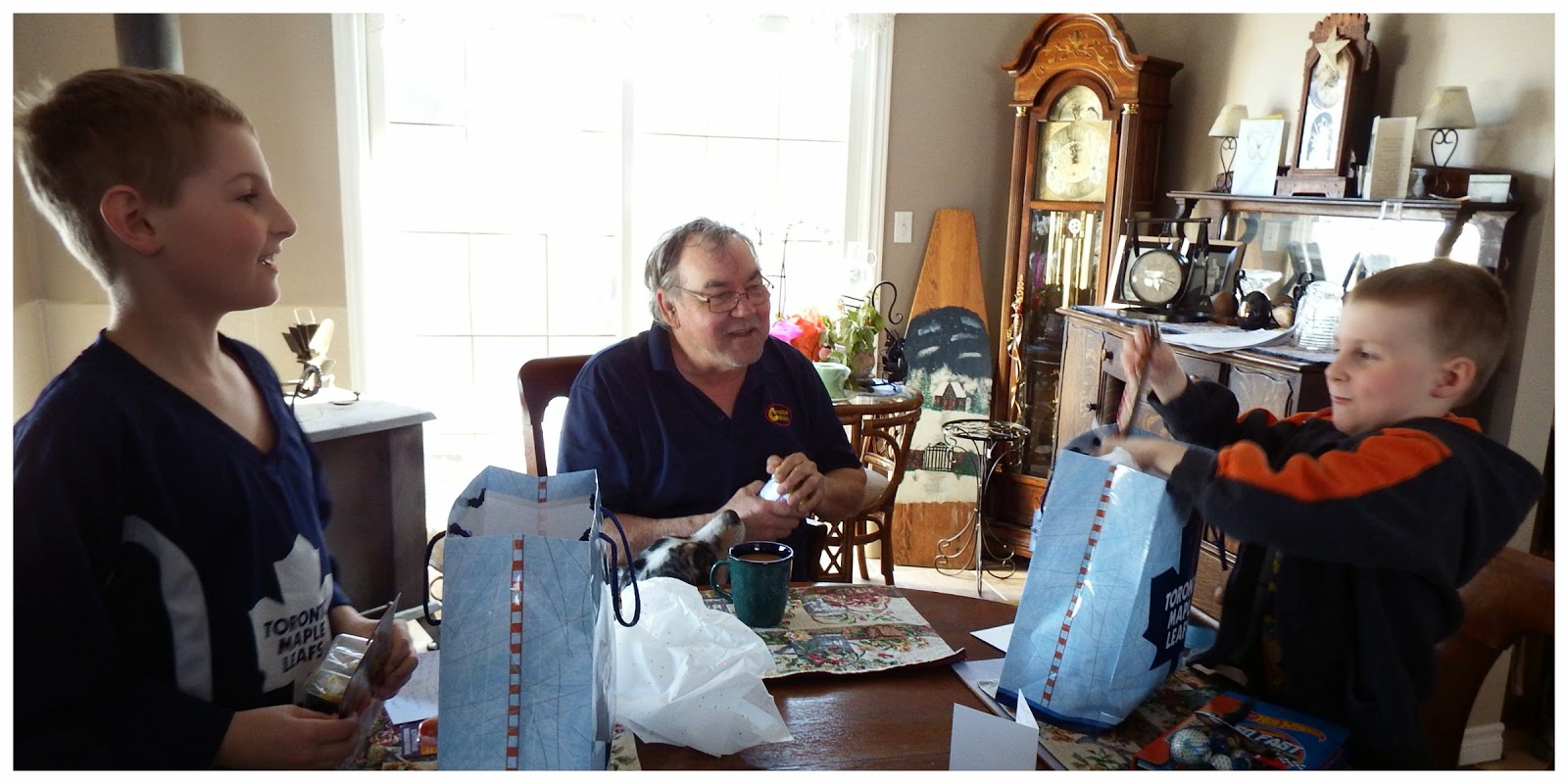 Connor has had his bath, now Aiden is in the tub having his.  Rob has gone out on a call, and all the Aussies are content and quiet for the time being.  Me?  I am feeling pretty tired but going to treat myself with using the dishwasher every day while the boys are here with us as a break.

Tomorrow?  Happy days are here & I am looking forward to it as an adventure together, Just North of Wiarton & South of the Checkerboard.
Posted by Cindy@NorthofWiarton at 3/15/2015 08:38:00 pm