Just after my "Crabby Cabbie" Rob arrived home around 4 am, I was up an hour later at 5 am.  I decided to go back to our warm bed and lay there until it was a half normal time to really get up for the day.

Once the morning Aussie chores had been accomplished I headed out on my weekly Saturday morning trip to Owen Sound.  I usually arrive back home before 10:30 am, but which time this morning Rob had been up when I had.

The Wiarton Fall Fair Parade for Ages 12 and under was to take place down in Wiarton's Bluewater Park this morning at 11:00 am.  I had wanted to go down to take some photos, but by that time the rain was coming down by the bucket full.  Really it had not been nice enough for man, nor beast to be out in that mess.  I hope they managed somehow to have enough room in the arena to judge who won the Bicycle that had been donated by the Purple Valley Ladies Institute.

Later on this afternoon, once the skies had cleared, I headed on downtown Wiarton once again.  I had a couple of errands to do, but had also dropped around to the Wiarton Chamber of Commerce's office to ask if the parade had been or not, since the offices are right in the park.   No as it had also been raining buckets in Wiarton.

As I was leaving the Chamber's office, low and behold out front had been ....

Young Kyle Gilbert with his Paint hitched up to the buckboard heading over to the Horse Show across the way in the Park.  Handsome pair that horse and young man make, do they not? they had even picked up a couple of young gals on their way. 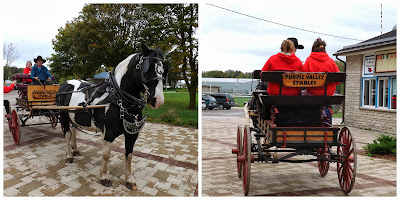 Heading back up towards Wiarton's Main Street the traffic seemed to be going a tad slower then usual ....

The reason for that was Kyle Gilbert's dad, Robert, had his team of Painted Percherons out for a walk around the block before heading down to Bluewater Park themselves.  Lovely team the are too. 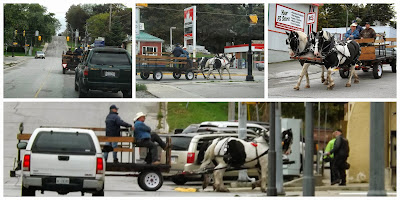 Part of the Wiarton's Fall Fair was horse pulls and such this afternoon, which I never got to take in. However I did so manage to finish up my errands and head it back home for a second time this day.

Almost to the front door I noticed this little guy, up close and center.  Funny the closer I got the more he seemed to show off by stretching himself right out.  He never tried once to "hop" away all the time I was taking his picture. 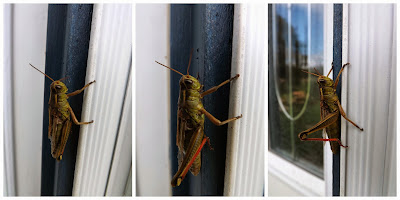 The remainder of my afternoon was spent out and in with the Aussies a couple of times, getting our bed made, putting together the payroll our Bookkeeper had emailed to me, and booking some fares for my Crabby Cabbie.  A little of this, and a bit of that kind of day it had been.

When talking to Rob about 5 pm, when he had been on his way home, we decided we would meet up downtown Wiarton for a Dinner date   To him it would be dinner, to me it would be a dinner date ... *smile*.

While I had been waiting for Rob to get into town I browsed around in at the Rankin River Trading Co..Post.  Just inside the door is this humongous Rooster.  I LOVE Roosters, but you would have to have the perfect spot to have this big guy displayed to get his full effect, would you not? 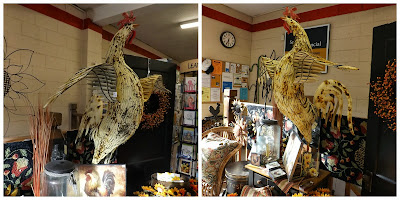 Rob did meet up with me about 5:45.  Right next door we headed into a very very busy Green Door Restaurant (reservations are always recommended).

Rob not usually the adventurous once, choose the Curry Beef Lentil Soup, Cabbage Rolls and a side of Caesar Salad.  Lemon Meringue Pie is always a "given" when it comes to Rob. 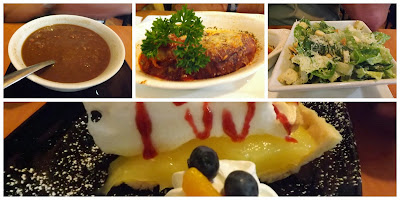 I had noticed the change in the Menu, being told by our waitress, Brit, that it was only newly updated a week ago.  I happily choose, after first consulting the girls to find Melissa (the other fantastic waitress) loved the choice I was going to make.  I ventured to try the Butternut Squash Lasagna.  Oh my ... I am already looking forward to going back again to have it, or even attempting to make on myself it was sooooo beyond GOOD ! 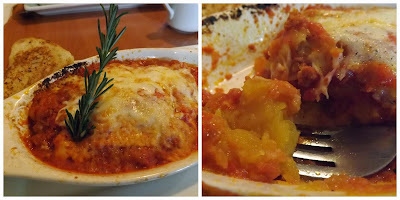 With our Dinner Date over, we headed  back home, Rob in his Crabby Cabbie mobile, while I headed across the street to get our personal van. 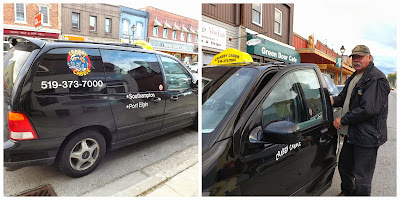 My morning began with the overcast sky to the left, and ended with a touch of Sun but still lots of cloud cover this day. 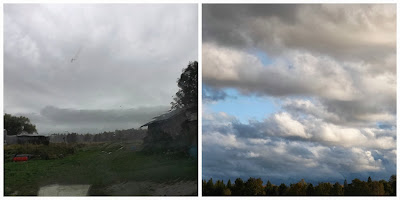 Really tomorrow will already be the first day of Autumn.  Fall 2013 will begin throughout our World, as well as in my little World here, "Just North of Wiarton & South of the Checkerboard".
Posted by Cindy@NorthofWiarton at 9/21/2013 07:55:00 pm