Rob drove me over to the Owen Sound Hospital, and as we were pulling in my Cell phone rang.  It was the Hospital calling to tell me the Cat Scan Machine broke down earlier this morning and would I call back later today to reschedule.  "Murphy's Law", I say ....

Not all a loss, as I had needed a few things while in Owen Sound.  Let me tell you, 7:30 am is the time to go shopping in Walmart ... it was a breeze !!!  By the time we had arrived back home, unloaded our shopping, and took care of our 4 Aussie's needs, we headed on down the road again.

There are some pretty big rocks that come out from Bruce Peninsula, needing some pretty heavy duty trucks to transport them.  Gozzy? I wondered at what that name stood for?  and it being such a nice day there had been a few Antique vehicles out and about in our travels.  New Hamburg? why on Earth would we end up there???? 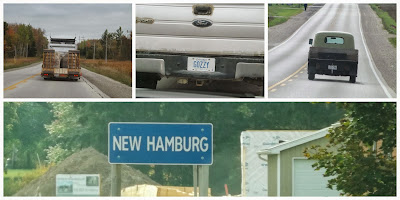 2:00 pm we arrived at my Son, Paul & his girlfriend, Liz's home in New Hamburg.  Ha he hide back inside the door when he seen the camera.  Paul was shocked to see us as he had no idea we were going to be showing up.  Yes they were all packed with all the bags and knapsacks lined up ready to be loaded. 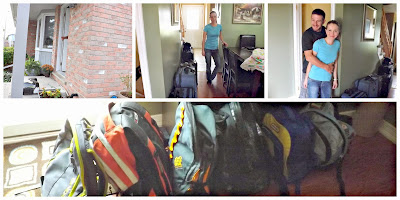 Unfortunately we did not stay barely an hour, as we needed to get back home, and they still had a few things to get done before heading out on their flight this evening to BC.  Liz's brother and his wife had their first Baby a month ago.  Paul, Liz and the kids are on their way to visit them.


The Sumac is beautiful in full colour at this time of year along Hwy. 8 heading into Kitchener. 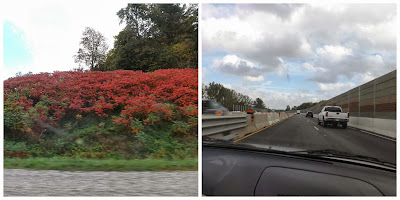 Rob had it in his mind he was having himself a treat before heading back home at somewhere he has not been to in over 10 years and more.  The scenery going inside, and outside had been interesting while Rob was making his Lunch choice. 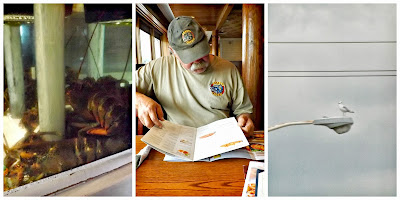 Lunch was served !  and oh my it was some good.  Where was lunch? at Red Lobster ... yummy, but a wee bit on the heavy side considering it was breakfast, lunch and dinner at one sitting for us both today. 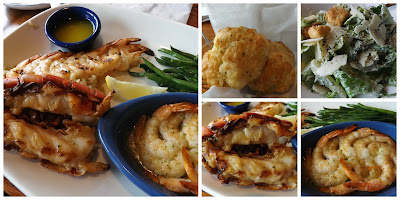 For a day that had started out dark, cloudy and overcast ended up being a beautiful day.  Not only did I enjoy the colours on the way home, I also stopped and got a deal on some mini gourds just outside of Elmira. 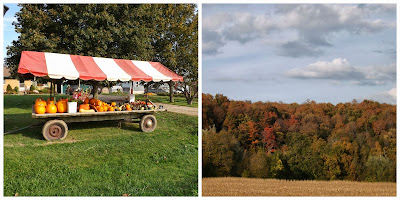 We finally made it back home after a very long day.  Did we get a new vehicle?  nope, we left our Van for Paul and Liz so they could take one vehicle to the airport today to transport all 7 of them, so we brought Liz's car home with us to use.  We had a little traveller who must have been hanging on pretty good at over 80 km per hour. 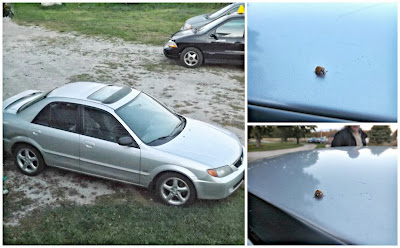 There had even been some Happy Mail when we got home.  I had "won" a bottle of Organic Honey from Bee U Organic's Facebook page over a month ago and received it today.  Thank You, Bee U Organic, BC ! 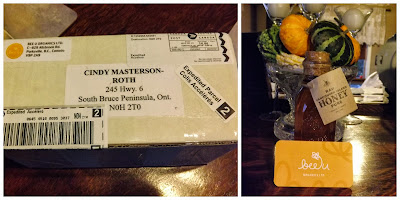 I did not only get Happy Mail in our Mailbox at the side of the road, I also had Happy Mail waiting for me in my Email Inbox too !!!


Waiting for their flight everyone had something with them to keep them amused.  Briar, Aiden, Connor and Josh, and Chloe looks like they were keeping themselves busy. 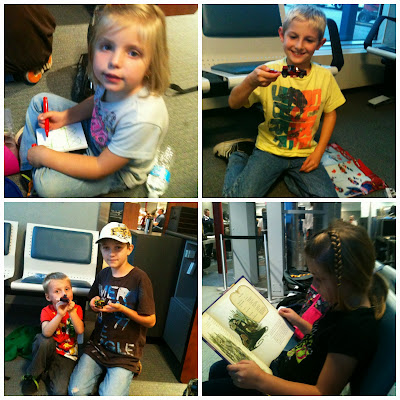 These photos absolutely "melted" my Heart ... and made my whole day. 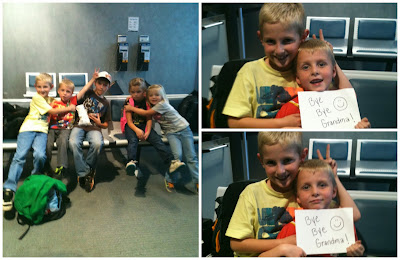 I am so excited as it is Aiden and Connor's very first time flying, and Paul's only second time.  At 7:45 pm they were off !!!  and should be out there in 3.5 hours I believe if I recall what I was told correctly.

It has been a good day, and I was really happy we surprised my Paul, and I was able to spend some quality time with my husband.  Now it is time to call it a "night", as I have a very busy day ahead of me tomorrow, "Just North of Wiarton & South of the Checkerboard".
Posted by Cindy@NorthofWiarton at 9/30/2013 09:00:00 pm

Email ThisBlogThis!Share to TwitterShare to FacebookShare to Pinterest
Labels: Bee U Organics, red lobster, Travelling to BC
Location: South Bruce Peninsula, ON, Canada