Today was another "whirlwind" with barely any sleep under neither my, nor Rob's belts.  I think I was destined to be sleep deprived all my life through.  Actually when there is no more life there will be lots of sleep then, so I will take what I have now (except a happy balance would be kind of nice).

Before I had left the house the first time today I had been working on a "Pay It Forward" project for The "Crabby Cabbie" trying to get it into motion today.


Please feel to SHOUT it out and share to everyone or anyone you might know in the Bruce Peninsula and/or Saugeen Shores areas. 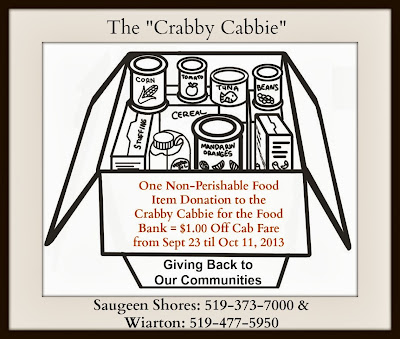 My first stop downtown Wiarton was at the Wiarton Salvation Army where they were very helpful by contributing to the Crabby Cabbie for the Food Bank by photocopying me 50 copies of the above for me to pass out to local Wiarton Businesses to display.  Thanks Linda !

After I had a couple of other errands done, I circled back to the Wiarton Salvation Army as today was the first day Bruce Area Recycling was dropping off Food Collected for The Peninsula Community Food Bank.


Volunteers from all over were there to help the food donations from the bins to get it weighed in with it then put aside for sorting. 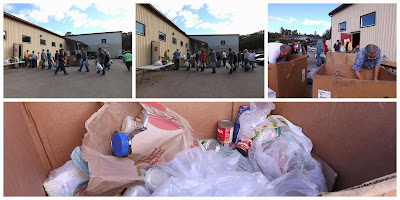 This is BASWR's 16th Annual Food Drive from September 16 - 27, 2013 to help support your local Food Banks. If you would like to participate in this great cause simply place an untied plastic bag of non-perishable food items next to your blue box on your collection day. To find out what day our drivers will be collecting in your area, please check your 2013 Blue Box schedule. Thank you for your assistance. 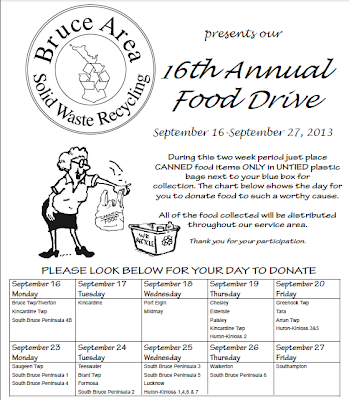 With the Thanksgiving and Christmas Season Holidays fast approaching the coffers at the local Food Banks will need extra food stuffs so they do not get totally depleted at such times.


"Special Thanks" to the Town of South Bruce Peninsula for lending The "Crabby Cabbie" 2 Recycle Bins for the 3 weeks we ask our Customers to donate to their local Food Bank.  It is a win, win situation since they get a $1.00 off their fare for a donation. 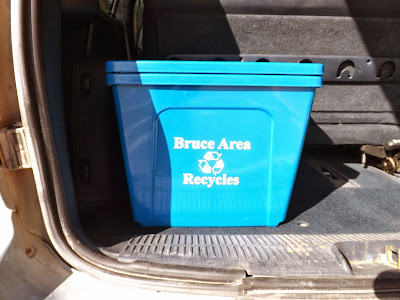 In-between calls today I managed to hand out all but eight of the fifty hand-outs this afternoon to local Wiarton Businesses.  Hopefully I will have more to hand out in Saugeen Shores by the end of this week.

When did I return back home today? after I had met up with my Crabby Cabbie Rob at the Wiarton Subway for some Dinner, it had been almost 8:00 pm.  It really was a busy all around day.

Over the years I have been blessed in many ways, and still am, being helped or supported in some form another, so paying it forward can come easy to me most days.  It might only be smiling at someone I pass on the street, or a good morning or hello ... it does not only have to be by giving material, Paying It Forward can also be given with only a slight gesture of kindness.

How do you find yourself "Paying it Forward"?

My eyes are burning, with me barely being able to keep them open.  I hope this post made some kind of sense this evening, "Just North of Wiarton & South of the Checkerboard".
Posted by Cindy@NorthofWiarton at 9/23/2013 08:59:00 pm