Not Certain Where It Was Going

Today was a day that I was not certain where it was going.  Why is that? because I awoke with much to do and still not feeling that great.  I put that feeling off to the side to get on with the day ....

The bed stripped, washed and hung out hoping the rain they were calling for was not going to appear, as the Sun was shining brightly until the washer started its cycle.  *Sigh* onward I pushed myself to begin the cleaning the living room.


My helper, as usual, wasn't as much help as I hoped him to be. 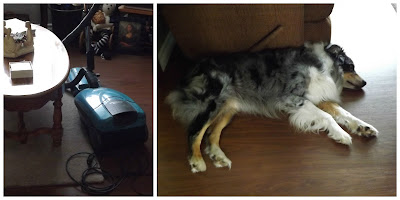 I had stopped for a moment thinking I should get going on some kind of walking regiment, hopefully back to where I had been two years ago before I had the 2 surgeries on my right knee.  I called my friend, Diana, who had voiced an interest in walking with me.  Yes ! she was on and we had thought maybe later in the day.  This was not to happen as Diana had called me back to say, "let's go this morning".

I rushed to take Lexus out, get the laundry out from the washer and onto the line before heading downtown Wiarton to meet Diana at the Tim Hortons.

The weather had turned perfect as we headed out about town on our walk.  Walking goes much easier when you have a walking partner by your side, does it not? or so I think it does.


By the time we had made it down to Colpoy's Bay the clouds begin to move in.  We stopped to admire this little Skye Terrier who had been shaved down clean due to allergies, then further along to admire the Chinese Lanterns at the side of the walkway. 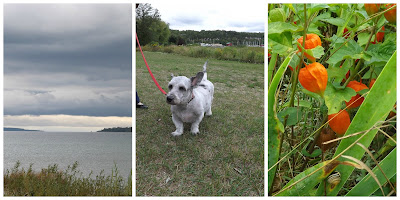 Onward we headed through Bluewater Park down to the Wiarton Marina ....


It must be getting to be that time of Year for some, as there was this one, as well as a few other boats out of the water.  The darken shroud of cloud cover continued to threaten journeying closer towards us.  The lone duck didn't seem to be aware of anything around or above him, swimming along on the bay that was like glass. 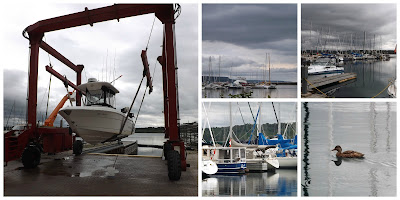 Diana and I had come along this gentleman.  The hat called out to me, so of course I had to stop to ask him about it.  He had just started collecting feathers in his travels of work around the Marina as he came by them.  Others had also contributed to his feather collection to adorn his hat, even boasting one from a Blue Jay.  I asked Diana to take a picture alongside him ... who knows he might some day become the famous Wiarton man with the "feathered hat" !!  Move over Wiarton Willie .... 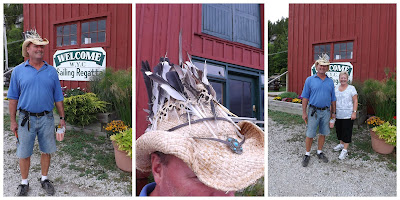 We continued our walk towards the water treatment plant but turned back around as drops of rain began to threaten us.  Up towards downtown we went keeping ahead of the rain drops.  Once on Main Street, we stopped again as we ran into someone, this time we knew.  That was good for quite a few moments and a few rain drops later before we made our way back to Tim Hortons where we had left our vehicles.  Once there Diana suggested we have lunch ... is that what one should do? work off lots of calories to have themselves a luncheon?  Of course it is !


I had the Turkey & Wild Rice Soup with a Jalepeno Bagel with Cream Cheese, while Diana had the Cauliflower Cheese Soup with a Biscuit.  That really yummy donut in the background? tweren't mine I say. 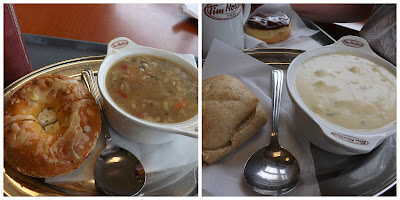 Diana and I had a really good walk, with me feeling much better for it.  I am hoping I can get going on some kind of regular walking routine again, as it has been long overdue.


Back at home walking by the Herbs, this little guy hopped quickly out of my way to safety.  Frogs are hopping all over our property at this time of Year.  The Aussies LOVE pouncing after them. 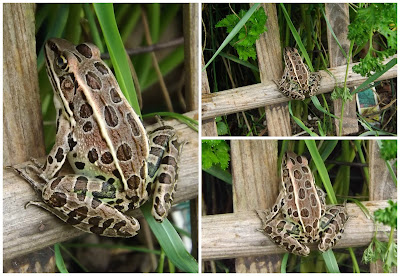 This afternoon I finished up cleaning our bedroom, then got onto researching about the Wiarton Fall Fair, as I have never really knew anything much about it until today.  A friend had asked if I would blog about it, and as it is a worthwhile Community Event, I definitely said, "Yes".


"The Biggest Little Fair in the North" takes place on the 20th of September from 7 pm to 10 pm and on the 21st of September from 9 am to 4:30 pm.  A copy of the fair books, along with Exhibitor tags, and exhibitor sheets can be obtained at: The Great Canadian Dollar Store, The Wiarton Echo, and Mothers Fabrics, downtown Wiarton.  Admission to the Fair will be $8.00 per person for a Weekend Pass, Adults, Seniors & Students $5.00 Daily, and Children under 12 are Free. 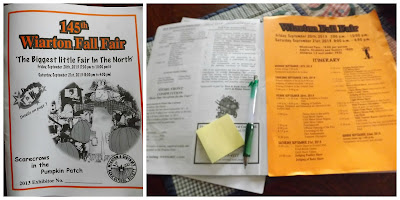 For further information or persons who could volunteer for upcoming 2013 Wiarton Fall Fair, please contact the Fair's Secretary:
Catherine Anderson by Phone at 519-534-1029 or Email at anderson437@bell.net

Once I had figured out all I could at the time about the Fair,  I carried on with the housework by gathering the bedding from the clothesline to get our bed made back up fresh.  By this time Rob had arrived home.  We headed on downtown as Rob decided he wanted Hot Dogs for Dinner.

I was so disappointed I hadn't my camera with me as in the Foodland store's parking lot we had ran into our Rusty puppy.  He had been soooo excited to see me !!!  What a beautiful lovable puppy that little guy is.  I am really proud on all the puppy reports we have been getting back on our Everything 8 litter, who are all 4 months old now.

We finally made it home to get our Dinner cooked.  Garlic Sausage on a Bun for Rob, instead of Hot Dogs, and Turkey Sausage for me.  For side dishes we had Garden fresh cucumbers sliced in vinegar/water, Yellow Beans, Beets, and sliced Tomatoes.  It was a good Dinner.

Rob has taken all the Aussies out and about for the last time this evening for me so I could do today's blog post.   Now that I am at the end of my day, I am all in but for my shirt tail, however quite pleased on where my day took me, "Just North of Wiarton & South of the Checkerboard".
Posted by Cindy@NorthofWiarton at 9/04/2013 08:27:00 pm