Gone To "H" In A Handbag

My excitement last night was ....

I was pulled over by our local OPP.. Apparently my speed was not consistent and I wavered on the road a couple of times. I told the officer all the lights of the oncoming traffic's glare was nasty especially when they do not low beam. He was just checking if I was drinking & driving. I don't know why he laughed when I told him I don't drink. He then said you weren't texting? I handed him my phone and said "nope, see no messages". He must have felt sorry for me thinking I can't have much of a life ! Hahaha ... if he only knew.   Ha, maybe in future I should carry some Homemade "bribe" Cookies around with me for times such as these?

This morning I was awakened by a searing pain in my head, teeth shattering in my mouth, a jaw that felt like it was vibrating, and my head feeling like I should be amputating it from the rest of my body.  Yes the weather changed and my body is paid the price today with yet another major Sinus/Migraine headache.

First thing I did was take T-2's and Ibuprofen and went back to bed praying it would subside somewhat.

Finally I got up to start the day with my Aussies, then a trip to Owen Sound, and another before lunchtime, to let my very tired "Crabby Cabbie" get some much needed sleep.

Getting back home by 12:00 pm I sat for a bit until Rob got up and went back to bed feeling quite ill to my stomach.  After a couple hours I was back up to go downtown for a bank deposit and a stop into the grocery store.

It was a very *sad* day for Waterloo Region this day.  A century old landmark and bustling lifestyle for farmers for miles around burned to the ground early this morning. 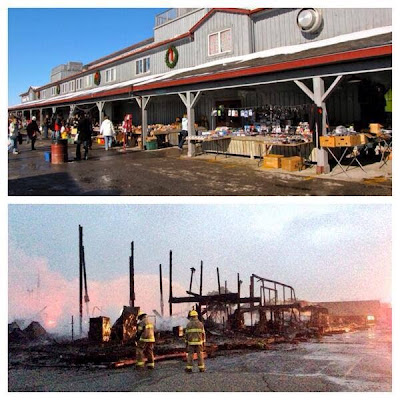 You may see the posted story and more photos by going to the following link:  http://m.theglobeandmail.com/news/national/fire-destroys-beloved-st-jacobs-market-near-waterloo-ont/article14070044/?service=mobile

I have spent many a Saturday morning at this Market through all the years I lived in Kitchener-Waterloo, living 5 minutes away before moving back to Bruce County.  My sister-in-laws store was in the building a stone throw away from where the market was.  Lots of family history on Rob's side revolved around this market and the Waterloo Market (now long gone as well)  It was this same Market where the suckling pig was ordered for our our meal when Rob and I were married 17 years ago.

Truly truly a *sad* day for many with memories by the miles left behind.

My friends Toni with an "i", and Abby this past Friday had just planned a Road Trip together to the St. Jacob's Farmer's Market this Month.  Toni had shared on her Facebook Page that we were going on a "road trip" together.  After learning about the fire this morning, she had stated she is going to keep any mention of a future "road trip" we might plan for ourselves to herself, as not to Kibosh it !!!  Oh man ....

When downtown at the local Foodland store I picked up a large Fresh Attitude Salad, something light for my upset stomach.

With 5 more days to go on the Best Before Date it was far from a Fresh Attitude Salad, and quite a disappointment for the $5.49 I paid for it.  I will be making a phone call tomorrow to the company on the package.  This in no way reflects on the Foodland Store, as they rotate and check the Dates on a daily basis there. 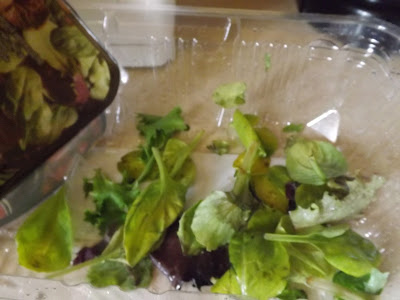 My father used to say the best thing about the end of Summer was that the damn tourists and flies left us alone.  Ha !


Traffic going home was at times backed up to our driveway, 4 km from Wiarton.  Sure glad I don't have to drive in Cottage Country traffic heading back home to the City, as I have the bonus of living Cottage Country ! 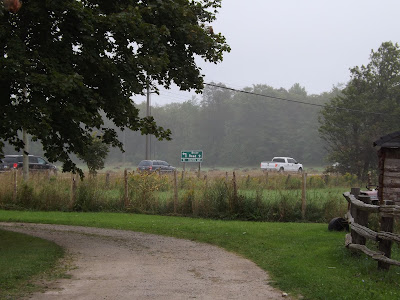 How would I describe my day on getting things done as planned?   "Gone to Hell in a Handbag" would pretty much sum it up.

The way I am still feeling sees me going back to my bed very shortly here again with hopes of a better day ahead tomorrow, "Just North of Wiarton & South of the Checkerboard".
Posted by Cindy@NorthofWiarton at 9/02/2013 08:25:00 pm