Crank Down The "Cranky"

It was a balmy 86* F two hours ago here in the shade, and 95* F in Ross, Indiana at my Facebook Friend, Carol's place.  I just arrived back home 15 minutes ago from Owen Sound, now 8:26 pm, with it still being hot and mucky here in this house.

The alternative in my eyes is "Winter", so I will keep this instead.

I had a miserable day, and I also felt just as miserable.  I did not want to get started on too much around the house as I was filling in for one of our driver's today, as he was off celebrating his Wedding Anniversary.  I did manage to make the bed and vacuum a dog of the floors, which I see it has already returned this evening.

Business is slow, really slow ... and not only for us, for everyone !

I finally got a call to go from Wiarton to Southampton.  Off I went.  When I was ready to leave the Southampton Hospital, Rob called me as my Auntie Gladys and him were parked out front of the hospital.  I thought maybe we might be having a mini family reunion.

Auntie Gladys was up to the Hospital seeing the Doctor as she wasn't feeling up to par, but while she had been in my other Auntie, Pearlina, had been brought in to the Emergency.  She had taken a really bad fall.  I went back into the Emergency to see her.  I almost felt my heart break when I seen her, finding it difficult to hold back the tears, as her head and eye had been badly bruised where she had fallen and hit it.  You have to understand my Auntie Pearlina has not much to her she is so slight and fragile, but you would love her as much as I do if you were to know her.

The Nurse was about to give Auntie Pearlina some kind of testing when I went in, so I promised her I would be back the next day.  I never got out of there without her first asking about Rob .... my Auntie Pearlina never ceases to amaze me how strong her mind and caring is of others.


This is Auntie Pearlina talking to Rob at our Family Reunion July 28 this Year.  She was having some fun by sticking her tongue out at me while I took her picture.  Caring, concerned and fun is my Auntie Pearlina. 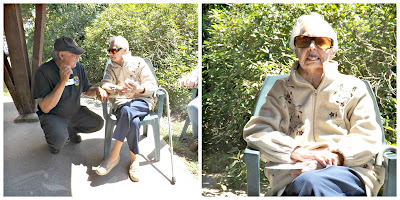 I came back home to Wiarton to do a couple more calls this afternoon, and then one to Owen Sound after the Dinner hour of 6 pm.  As I said I did not get back home too long ago as I made a stop at Zehrs Market in Owen Sound to pickup a couple of things I needed for this upcoming weekend.

I did take a bit of time out to day to call a Blogger Friend of mine down South way.  It was nice to catch up  with a little chit chat with Kat of Kat's Retirement Journey.  I have been very fortunate to make a couple of fast friends through blogging who also have Fibromyalgia, and who I have had further good fortune to be in contact with in person.  It really helps having support from others who understand what I feel most days, and know I am not alone in this respect.  Thanks Kat and Karen !!! to both of you for being there for me.

Oh yes, I also had called my sister-in-law, Delores, this morning.  Her and husband, Darol, are taking off to Vancouver tomorrow then heading out on an Alaskan Cruise to celebrate their 40th Wedding Anniversary of last month.  I am tickled every colour of the Rainbow for them, and can not wait to see their photos when they return home.  Bon Voyage Delores and Darol !!! xx

And before I forget my dear Son, Paul, emailed me a photo of his poor Elizabeth Anne, who had the misfortune of having her Wisdom Teeth out today.


Poor Elizabeth will have no idea this photo was posted until she reads my Blog.  Paul, she will get you back I hope you realize ???? 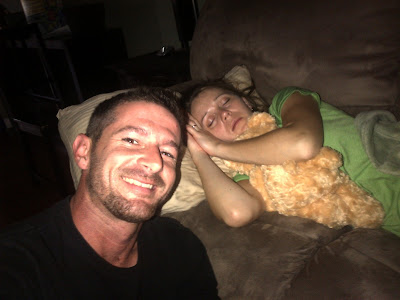 Cindy's Recipe Exchange is having a Pot Luck get together with some of the Exchange's members this upcoming Sunday.  There are almost 400 members from all over Canada, the USA and a few other countries, but only a handful from around Grey/Bruce Counties will be able to attend.

We have graciously been provided with the facilities at the Billy Bishop Airport (CYOS) in Owen Sound. There is also going to be a draw for 2 or 3 members for a FREE Airplane Ride compliments of a couple of very nice Flight Instructors at the Airport.   I am pretty excited and hoping the weather will be nice for this day.  Alas, though I still have not decided what I will be making to take to the Pot Luck, can you believe that?

Anyhow I have "cranked down my "cranky"", now that I am home and settled in for the evening.  I really do not like having bad days and feeling so out of sorts when I feel this way.  Tomorrow is another day ahead, however busy I am still looking forward to what it will bring, "Just North of Wiarton & South of the Checkerboard".
Posted by Cindy@NorthofWiarton at 9/10/2013 09:06:00 pm