Migraines knock the "heck" right out of a person.  Anyone that suffers with migraines will have no problem validating this point for me.  Mine seem to be triggered by weather changes, sometimes starting with a Sinus headache and moving up to a full blown Migraine, other times maybe not.

Life does not stop and wait for us one iota, so my day had to get going onwards to month end billing, which really wasn't too much at all.  The worse part of my morning was faxing over 20 some sheets in for payroll to realize after I had them all set and scanned that I hit "send" and the darn phone line had not been plugged into the fax machine !!!  Oh man I had to scan all those sheets, one by one, all over again.  Damn, damn, triple damn .... life does not stop there and reverse.

I hand delivered one bill, then headed down to Saugeen First Nation's Gas Bar to meet Rob and get my Van gassed up, then passed him the other bill to hand deliver himself.

I got all the way back home to realize I had forgotten to stop at the Gateway Nursing Home, as the Nurse had called to say Mom would like some boxes of Kleenex dropped around if I could.  It just happens I had bought some for her 2 weeks ago and they had still been in my Van.  Off I went again ... and didn't I forget the other blouses I had gotten for her Saturday to take along for her  to try on.  Geez !!!


Bandit got to go along, and was pretty happy to get the attention from when we entered the building all the way up to Grandma's Room.  Before we left Grandma had to show him off to everyone around on her floor (there had been only a couple of others we had gotten to see). 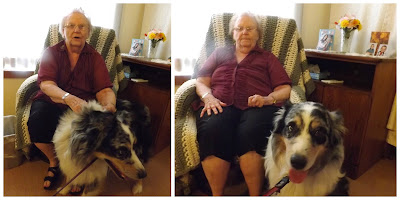 I got back home to have a bit of a rest before it was time to get Dinner going.  Gayle had arrived to get some produce from the garden so we had a little chat while she was here.  After Gayle left, Mercedes helped me pick some Yellow Beans for our dinner, not that she was much help as she was trying to pilfer what she could for herself from the garden.


I had been whipping up our Dinner by the time Rob walked in around 6:30 pm.  Leftover Rosemary-Crusted Pork Tenderloin thinly sliced and heated in some Homemade BBQ Sauce, Garden Fresh Yellow Beans, cooked to perfection (this time around), and Basmati Rice. 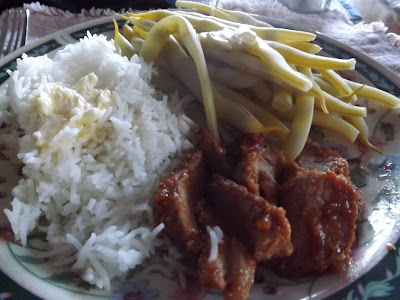 My Paul called while I was getting our dinner together with promised he would have the boys call me before he took them back home from their visit.  I not only got a phone call, I got "First Day Back to School" Pictures too !!!  From Paul's two boys & Liz's three ... lucky me !


It is times like these that I really miss being so far away from them. 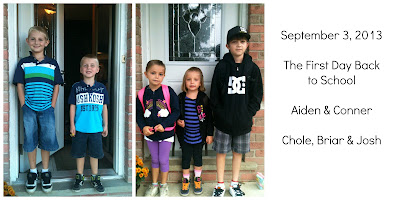 This afternoon I had been feeling a little melancholy reflecting back on when Paul was in school.  It did not matter where I worked, before I was hired I had always asked for the first day of school off so I could see my boys off and be home for them that first day.  It was very important to me, and something I really missed when it ended.  I continued to do this even when Paul was in High School.

This afternoon I also called the company who produces the Fresh Attitude Salads for Sobey's/Foodland.  They will be sending me a Coupon for a Foodland store as reimbursement for the spoiled salad.  Their Customer Service Rep was very approachable and nice.  I should be receiving it in the mail within the next 2 weeks.

I am beat, but better then Yesterday.  I am heading off to package peas for the freezer that Rob just blanched and podded for me.  Hopefully a fitful night of sleep ahead and an eventful day ahead tomorrow, "Just North of Wiarton & South of the Checkerboard".
Posted by Cindy@NorthofWiarton at 9/03/2013 08:30:00 pm

Email ThisBlogThis!Share to TwitterShare to FacebookShare to Pinterest
Labels: First Day Back to School
Location: South Bruce Peninsula, ON, Canada