Another Write-Off Day For Me

Was there a "full moon" or something behind all that cloud cover and rain fall last night? cause my sleep did not improve last night either.

It was pouring buckets of cats and dogs with thunder and lightening outside my windows in the wee hours of the morning.  I was wide awake when Rob came in and finally got up before 6 am.  Bandit did not leave my side as he is terrified of the thunder.

I never thought there would be a break in the torrents of rain coming down so I could get the Aussies out for their first business of the day, but we were lucky and managed to get out and back in by 7 before it started again.

I headed out for my trip to Owen Sound and back by 8:30 am.  By the time I got back home I could barely move any part of my body.  My muscles were all screaming, feeling like I had been hit by that famous Mack Truck again.


I had every Fibromyalgia Face on my mug this day. 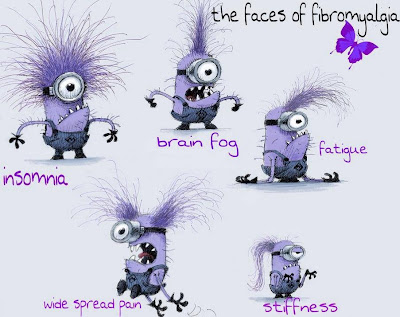 Needless to say it was not a productive day for me, being a total write-off  which frustrates me to no end.

Rob on the other hand, other then tired, was feeling pretty good with no Arthritis Pain in his hands whatsoever since he had been wearing the Balance Band he bought Thursday night.  His poor fingers are usually so swollen up he can barely move them.  Not today.  He showed me by wiggling them in front of my face, saying "look at them".  Trust me I was very impressed, as this poor guy has suffered for years, especially where the chainsaw had cut through his fingers on his left hand years ago.

Rob took it upon himself to call Linda, the lady we had purchased his Balance Band and leave  a message that we would like one for me as well.  I had just received a return phone call back from Linda about 2 hours ago to go down to get one.  I have it on now.  I will give a full report on how it is working for me in the next day or two.  Really if it does work, I will be ecstatic !!!  wouldn't you?

I did manage to go out in the drizzle to get some Beets from the garden to boil up to go along with Rob's Dinner.  Leftover Venison Meatloaf, boiled new potatoes and beets. 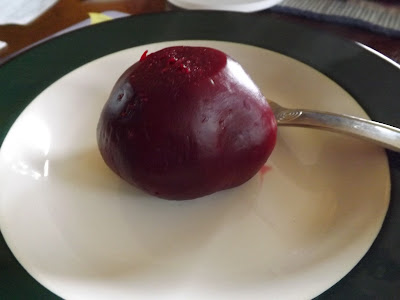 I commented to Rob how sweet the larger beets were more so then the smaller ones.  I had two large ones for my lunch.

This was the whole day, rain or drizzle, now with the fog moving in.  Drab, drab and more drab, but not for the beautiful Sunflowers showering their brightness from a top their 10 foot stems. 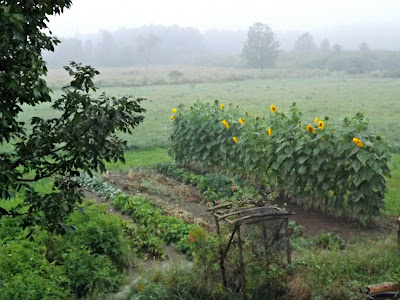 I have had all the Aussies out and back in for the last time today.  Buddy and I had some "extra" long time out together today.  I even managed to put a brush through him a bit outside, despite the drizzle coming down.  I like when I take that "extra" one on one time with each of the Aussies.  Bandit gets it all the time, but the others not as much as he obviously does being the "upstairs" house dog.

The Fall Fairs have begun in and around Bruce County this past weekend beginning over in Owen Sound, with upcoming ones in Paisley and Tara this week.  For an Ontario Schedule of the Fall Fairs, please check the following website link:

I think I am going to be calling it a night here shortly with hopes this Balance Band soon eases the pain I have been feeling all day, bringing sleep along with it, "Just North of Wiarton & South of the Checkeboard".
Posted by Cindy@NorthofWiarton at 9/07/2013 08:50:00 pm