My very first flight above the clouds in a Cessna Airplane was a Life Experience I am not going to soon forget.  I had the time of my life !!!  Really for someone who is terrified of heights, and was nervous like anything just a short few weeks ago when flying down to Nova Scotia, I can not believe how calm, cool and collected I had been.

Although it was said I screamed the loudest when we did the "fun" take-off, although I beg to differ this point.

The "fun" take-off?  that is when you are first leaving the air strip to for take off and the plane goes straight up in the air ... remember those hills and dales on the back roads when we were kids our father's used to speed over and we wore our stomachs up in our throats?  that feeling but on a much bigger level.

Here we all are prior to loading up for take-off.  Recipe Exchange Members, Debbie, Donna, myself, and Flight Instructor, Dave Kalistchuk of Owen Sound Flight Services. 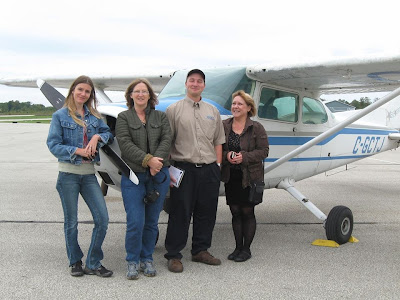 After being loaded up there is Assistant Manager for the Owen Sound Billy Bishop Airport, Bob Vary, taking a last shot of us before take-off, while I am inside checking out all the instruments in front of me and the EXIT sign to my right and above my head.  Like I was going to be exiting anytime soon once up there? especially when I had been told "NO Parachutes" when I asked. 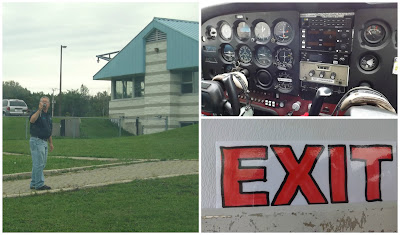 We first headed over above Meaford where we eased over the Marina there, then swung by where Donna lives.    When up in the air everything down below looks like a patchwork quilt, does it not? 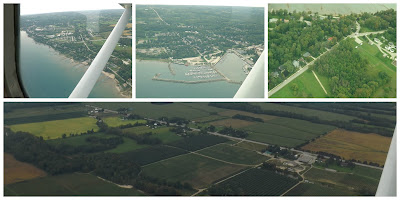 I am pretty sure when we headed over Owen Sound way Dave had mentioned we were going over 200 km per hour.  Here we were over top Inglis Falls, then a very huge Quarry heading back to the airport. 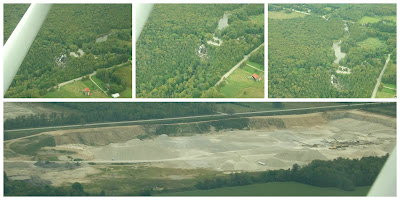 I could not believe how quickly 20 minutes went by.  We could even see far across Georgian Bay to where the Islands off Wiarton were.  So much more to see from up above the clouds.  Finally we were coming back by the Airport and the landing strip.  Notice the CYOS cut into the grass?  Cool is it not?  Way to go CYOS Owen Sound Billy Bishop Airport. 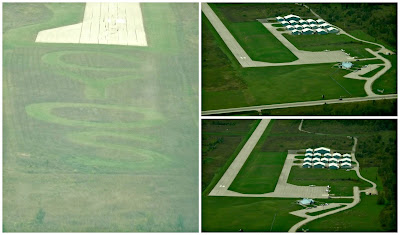 Dave is taking us in for the landing.  Really Dave, are you not to be keeping your eyes on the runway, instead of photo posing???  Truly it was smooth landing and I had the time of my life. 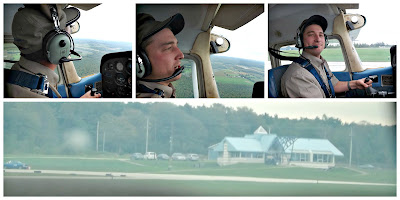 Do you know we have all been asked back again?  I really think they liked our Potluck food .. *smile*


The lovely Mums my friend, Toni with an "i" had gotten me go so well with the yellow one I already had.  . 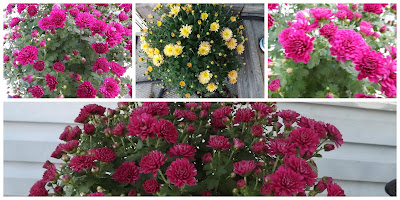 Once again, many thanks to all who contributed to this Life Experience of flying I had yesterday.  Also to Mother Nature for cooperating in the Weather department.

Today?  Ho hum.  Just another day where I spent cleaning up, washing the kitchen floor, brushing 2 or 3 other dogs out from Bandit, and generally doing whatever needed doing until my energy was depleted.

Tomorrow hopefully is warmer then today was, as I am already missing the warmth of Summer, although the Sun had been out, "Just North of Wiarton & South of the Checkerboard".
Posted by Cindy@NorthofWiarton at 9/16/2013 07:29:00 pm