I most certainly was not moving too quick this morning when I finally got out of bed just before 8 am.  I can not believe I was in bed until that time of the morning, nor that I did not want to get out.  I am beat, Rob is beat, and I am wondering are we just getting run down or what.

I do not know how we can get run down when I am thinking I do not see any progress getting done around here.  Then again, when one is out trying to scratch out a living for themselves, who has time for the other details that used to be looked after when we had been making a living for someone else.

It was early in the morning when Rob had called me from work.  He was in pain, he sounded like he was in pain, and he had not let on for the past three days, but finally did today as it was getting too much for him to bear.  Hmmm ... that is my answer why he was a bit on the crabby grumpy last night.  Nobody is in a good mood when they are in too much pain, are they?

I called the Good Doctor's office in Lion's Head.  The doctor's receptionist had an opening for us this morning at 10:30 am.  I called Rob, who after getting a driver cover for him, headed home to collect me then head on up to the Doctor's.

The pains are on his left side between his groin and belt line.  It is suspected that after he had been pulling and pushing two lawn tractors on and off a trailer this past Monday, then lift a tank onto a trailer with my Cousin last night, that he has pulled a muscle or has the beginning of a hernia.  We are hoping for the latter.

Dr. Loney gave him freezing where the pain was, a prescription for pain medication, ordered an Ultra Sound, and told him to go home to rest.

I am thinking Rob maybe only got a couple of hours of sleep this afternoon as the rest of the day ...

.... was spent watching a bit of TV with Bandit, and then going out to put a Taxi top on one of the Taxis.  Geez does he not know the meaning of "rest" ?  ﻿ 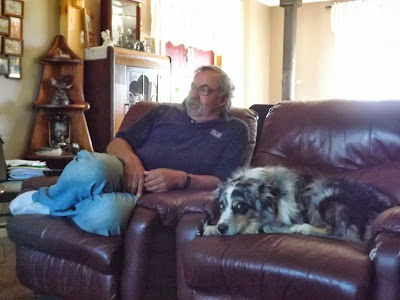 Why is it people want to rest when there are things to be done, and do not rest when they are suppose to?  Another baffling question that never seems to have an answer.

This afternoon I went down to Wiarton to the pharmacy to pickup our prescriptions.  I had also had one there for myself too for a new Brand of Migraine medication.


When I opened the bag containing the Axert, then read the receipt, I almost had a heart attack.  $15.56 per pill !  What do these drug companies put in these drugs?  Gold????  all I have to say is I hope these work, as the Zomig I used to take never worked and they cost each $1.00 more then these ones.
﻿ 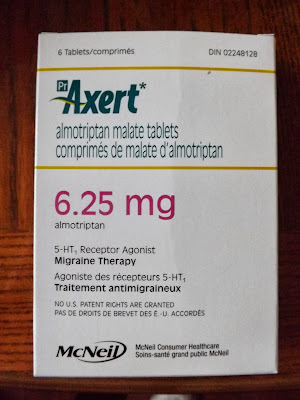 Really I shake my head about such things as it is ludicrous and insane to charge people such prices.

Our Dinner was simply a BBQ'd Hamburger for Rob and a BBQ'd Turkey Burger for me tonight.   I thankfully only have a couple plates and utensils to wash up yet.

Tomorrow I will be covering for one of our Crabby Cabbie drivers, so really do I expect to be productive here?  I doubt it, but hopefully at least I can get the bed stripped, washed and hung out on the line.

Even though I did not sleep through the night last night, it had been an early night, which I will be also projecting for again this night, "Just North of Wiarton & South of the Checkerboard".
Posted by Cindy@NorthofWiarton at 9/26/2013 06:44:00 pm