Rob got home at 3 am.  I got up out of bed before 6 am.  We were out the door and heading South on down the highway just after 8 am.

First stop was Tim Horton's in Wiarton.  Second stop, Paisley to pick up our friend Tim a New Generation Balance Band.  Third stop Tim Hortons in Harriston, and not for coffee but to use the washroom facilities.  Fourth stop, our destination, Costco in Kitchener.

Once we seen the signage for Kitchener it did not take us much longer to get out to Sportsworld Drive and past an old favourite restaurant of mine, Pioneer BBQ.  Oh man they had the very best pies in the World back in the day ... I haven't been there for years now, so wondering if it is the same. 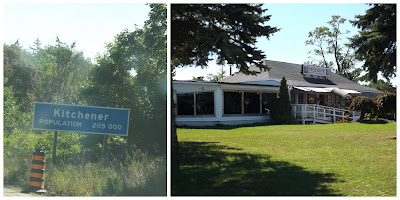 We switched to Kirkland Brand Dog Food back in the Spring with great results.  Instead of being a bother to people with a Costco Membership we figured we would get our own membership and go ever 4 months to get a supply of Dog Food in along with anything else we might need at the time.

Since we met our friends, Bob & Tim there, we took advantage by having Tim give us a referral, that way we both got a $10.00 Gift Certificate.  Hey, $10. is $10 savings we never had before.  So that brought our Membership down to $52.00 including taxes.  Our Son, Paul, met us just as we were ready to head into the checkouts.  Poor Rob looked as if he had enough of shopping, with Bob and Tim smiling in the background, and Paul not wanting his photo taken with a "stop that Mom" ! 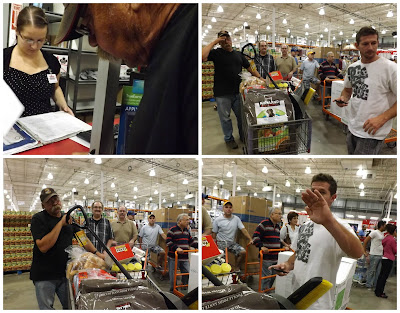 Four bags of dog food, a shovel, snow brush, wiper blades, and a few other essentials was a cool $266.00 dollars later ... *faint*.  Thank goodness I do not live nearby a Costco as I could not afford more then a 4 x a Year shop there.

By the time we were finished shopping we had all been famished, not having any breakfast but for a tea biscuit with coffee on the trip down.  Bob suggested Turtle Jack's located just up the way from Costco.  Off we went ...

The decor at Turtle Jacks's Muskoka Grill is amazing.  The food? out of this World !  Rob ordered 2 piece of  Beer Battered Fish & Chips, and I the Clubhouse on Cranberry Bread with a side of Greek Salad.  Rob had to take one piece of fish home with us.  Our Bill was less then $40.00 for Rob and I.  The quality and quantity of food was well worth the price. 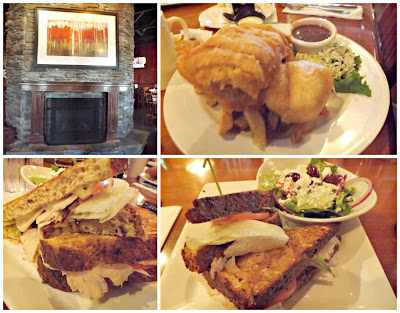 By the time we said our Good-byes to the guys, it was well into the afternoon.  We never arrived back home until 4:45 pm.  That was a "full" day for the both of us.  Unfortunately there had been no time to drop in for a quick visit with my sister, nor Rob's sister, both who live in Kitchener.  Next trip will have to be a must do.

There certainly were four Aussie dogs all happy to see us ... they had all been very good in our absence without one mess anywhere.  Both Rob and I are on a bit of the weary side now, but it was nice to have a day away to ourselves and to catch up with good friends, who we had not seen for some time, as well as seeing our Son.

I kind of fell off my WW point program today, but hopefully did not jeopardize the 2 lbs I lost and back on track tomorrow.  A girl has to have a "day off" occasionally does she not, "Just North of Wiarton & South of the Checkerboard".
Posted by Cindy@NorthofWiarton at 9/08/2013 08:04:00 pm