Cancellations Did Not Hold Up Being Busy !

This morning Rob and I were both awake before 5 am, having gotten up and out of bed shortly after.  The nutty thing about that is Rob wasn't going to be going into work this morning, but still had to get up for a morning "pow wow" with our drivers.

I also had cancelled my weekly Doctor's appointment, as we had an appointment scheduled with an Insurance Company who was sending an inspector to meet up with us before providing us with a Commercial Automobile Insurance Quote for our Taxis.

Since we were not expecting the gentleman until almost Noon, we had thought we had better get at the lawn since rain was predicted for later this day and throughout the Labour Day Holiday Weekend.  While I took care of the lawn cutting, Rob worked on getting our garden rototiller going.

I finished the lawn up after 10:30 am to come in to find a message had been left by the inspector that he would not be making our scheduled appointment.  I called his number to find out on his way here he had been rear-ended by another automobile !!!  OH MY ... but enquired right away about his well being.  He was fine, however his vehicle was being towed.

When I worked at an Insurance Adjusters in Kitchener, I learned the most accidents were rear end collisions being caused by people following too closely.  Do NOT follow another vehicle no matter what the weather, etc ... as they might quickly stop suddenly with you glancing at something going by and "bang" you end up hitting them.  The guy in the rear is usually always 100% AT FAULT, so please heed this good advice.

Hopefully we will be contacted by the first of the week with a rescheduled appointment.

This is one of our 5 vehicles.  I know we maintain them mechanically whenever one little thing does not sound right, and them being serviced every 5,000 km.  We also pride ourselves on keeping them as clean as we are possibly able (more then I can say for my personal Van at the moment, as I can't even keep up with my house !   Shame on me.)  PS.  The Dog does not go with the vehicle. 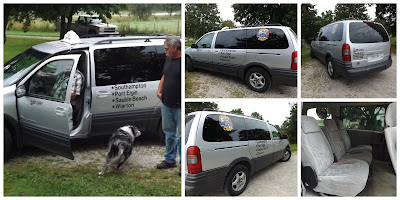 Would you give the Crabby Cabbie a "pass" on his Crabby vehicles?  And remember this is the last Holiday Weekend of the Summer, it being Labour Day Weekend so .... 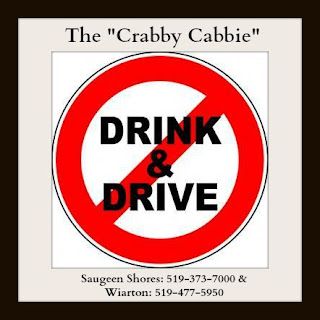 I did take the time today to clean our bathroom sink and bathtub.  We have hard water, as well as minerals in our water with one of them being Iron which causes unsightly rust stains.

An acquaintance told me today she uses Baking Soda and Peroxide with great success, so I gave it a try with no success myself.  I returned to my old stand-by, Bowl Brite, however harsh it does the job right every time.  The only thing is it marks your taps if it happens to get on the stainless steel. 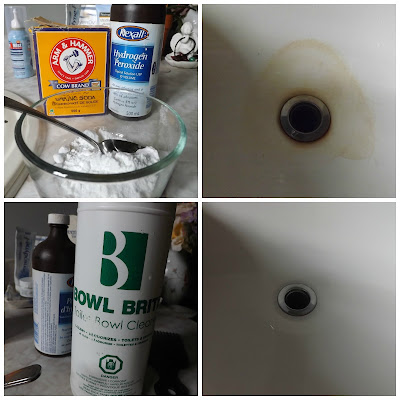 After I had made Rob a lunch of toasted Bacon & Tomato sandwiches, and had myself a relaxing coffee, I thought I would head downtown Wiarton to take in the Wiarton Farmer's Market.  I had only missed one Friday at the Market since it began this Year and that was the Friday after I had returned from down East.

Love seeing all the Fall "colours" at the Markets, as they are so warm and inviting.  By the way, I LOVE Sunflowers too. 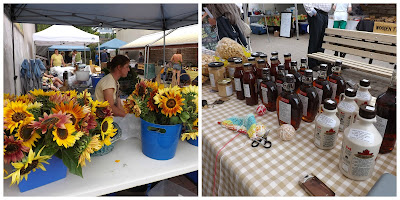 Once I had a bit of a chit chat with my Market friends, I took a walk down main street where I came upon a flyer in the window of the Berford Street Tea Room that had caught my attention.


I am thinking this would be something interesting to go and listen in at.  I heard the speakers are also very well versed in the subject.  Maybe a "something" to mark the calendar with.  Admission? only a donation for the Foodbank. 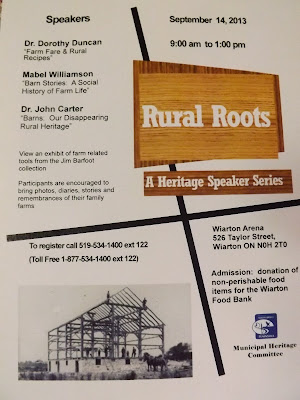 I, as I usually do, ended back home again sometime after 3 pm.  What did I do then? not too much of anything as my muscles were screaming at me by that time today.  I pulled up the couch and relaxed until it was time to think about some Dinner for the two of us.

Rob had picked up some corn from Sinclair's in Hepworth on his way home last night.  This was our Dinner and it was sweet as sweet could be.  Really the best corn on the cob I have had yet this year.  Sinclair's is usually always the Best ! 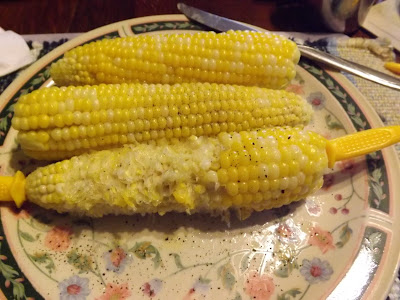 After Dinner I got myself going with the making of a double batch of The Best Peanut Butter Cookies.

The first batch out of the oven were even cool enough for Rob to try before he left for work this evening.  I have made up 6 pkgs of 6 cookies each for the Wiarton Optimist Club's Annual Yard Sale tomorrow.  Here is a little "peek" at last year's sale by *clicking" HERE. 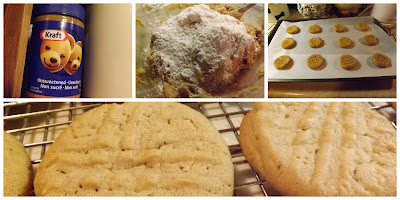 Recipe please?  PRINTABLE RECIPE *CLICK* HERE.  And they really are The Best Peanut Butter Cookies, just like the Buttermilk Banana Bread was the very Best I have also ever made.