What A Drastic Weather Change Up This Has Been?

Wow we went from temperatures in the low minus' into plus temperatures, just like that, lickity split.  Where else can you have Four Seasons all in one day, or so it seems at times, but no other then in Bruce County. 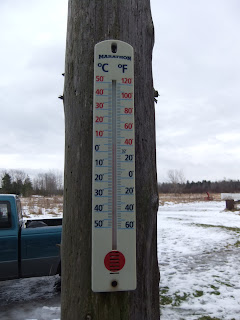 "Yes, just before the lunch hour when Bandit and I ventured out for the mail, the thermometer read Plus 5."

We still had the woodstove going first thing in the morning, as it had still been a little on the damp side.


"I had to tread carefully along some spots on our driveway as they were a bit icy." 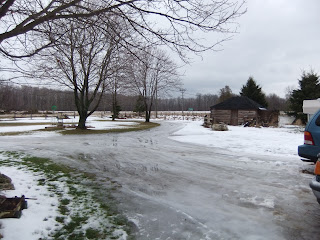 "Bandit absolutely loves the snow, soggy or not." 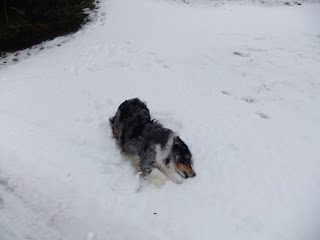 "Come on Mom, come and have a snow romp with me !" 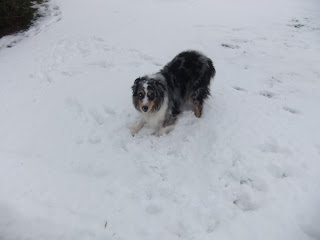 Once lunch was cleaned up from, I called my friend, Sharon, and met her at her place, downtown Wiarton, for an afternoon walk.  Even though it was milder, I still found it to be a bit on the chilly side.


"We passed along this Chainsaw Art by Local Artist, Bobbi Switzer." 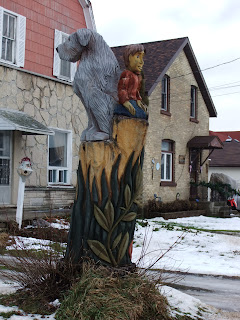 We ventured further down towards Colpoy's Bay, by walking through Bluewater Park.


"Despite mild temperatures there was still ice in the Bay, however it could very well be gone by tomorrow or even this evening as we have had some rain since." 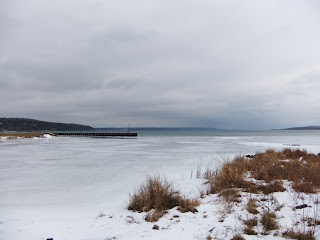 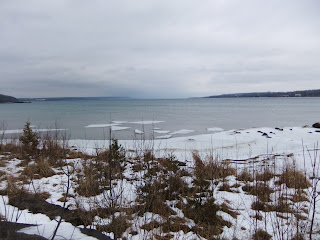 After Sharon and I had our walk, I headed on home to where Rob and I took off to the No Frills Store in Owen Sound.  On our way, we decided to treat ourselves to a Tim Horton's coffee. 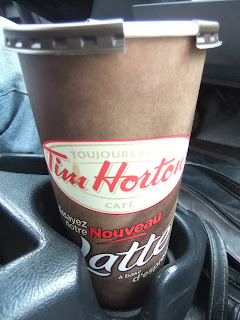 "Not remembering Tim Horton's cup sizes were changing, effective today, we ordered our usual "extra large".  We were both surprised when we received these monstrosities of coffee cups, as now the "old" extra large coffee sizes, are now the large size.  Not thinking this will be my new usual size, and will be going back to the now new "large" size, staying far away from the "extra large" sizes."


We got the necessities at the No Frills store which we had set out to get and made our way back home.  We weren't too far outside of Owen Sound, on the stretch of road they call the Long Swamp, when we spotted a fair sized Hawk perched up on the telephone wires.


"This is as close as I could get before he flew away up on up the roadway, perching once again on the wires.  He was quite a good sized Hawk." 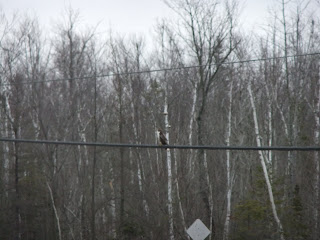 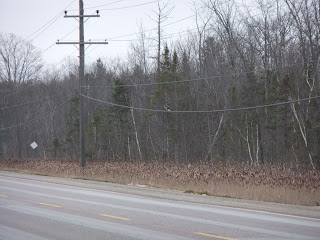 Once back home, we put away all our purchases and I got going on making our supper.  Since Rob does not want chicken for a little while now, as I have chickened him out, I had some hamburger out to try a new meatloaf recipe I had come across.


"Rob and I both agreed that this is about the best Meatloaf we have ever had.  Nice and moist with lots of flavor." 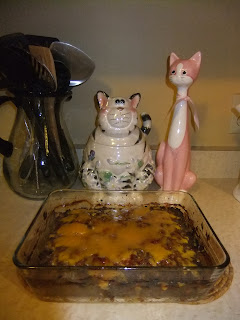 I had found this Meatloaf Recipe online at Kraft Recipes.  Here it is:

Favorite Meatloaf ~ Recipe Courtesy of Kraft
what you need
1 large onion, finely chopped
1/4 cup Kraft Calorie-Wise Zesty Italian Dressing
1-1/2 lb. (675 g) extra lean ground beef
3/4 cup ketchup, divided1 pkg. (120 g)
Stove Top Stuffing Mix for Chicken
3/4 cup water
2 egg whites
1/2 cup shredded Cracker Barrel Light Old Cheddar Cheese
make it
HEAT oven to 375°F. Cook onions in dressing in large nonstick skillet on medium heat 8 to 10 min. or until golden brown, stirring frequently. Remove from heat; cool slightly.
MIX meat, onions, 1/4 cup ketchup, stuffing mix, water and egg whites. Shape into 10x5-inch oval loaf in 13x9-inch baking dish; cover with remaining ketchup.
BAKE 55 min. to 1 hour or until cooked through (160°F). Sprinkle with cheese; bake 2 min. or until melted.
kraft kitchens tips
SUBSTITUTE:  Watching your sodium intake? Try Stove Top Lower Sodium Stuffing Mix for Chicken.
NOTE:  I used 2 lbs of beef, Stove Top Stuffing for Turkey & 2 whole eggs.
I will be definitely adding this recipe to my favorites.
The day actually seem to go by rather quickly for some reason.  I was happy I did accomplish a few things, as well as being able to try out another "new to me" recipe that is going to be a keeper.
With still a sink full of supper dishes awaiting my attention, I think I will tackle them so I can spend the rest of my evening relaxing, "Just North of Wiarton and South of the Checkerboard".